The rare Saturday afternoon game will be Boise State's first regular-season matchup to air on one of the primary networks in a decade. 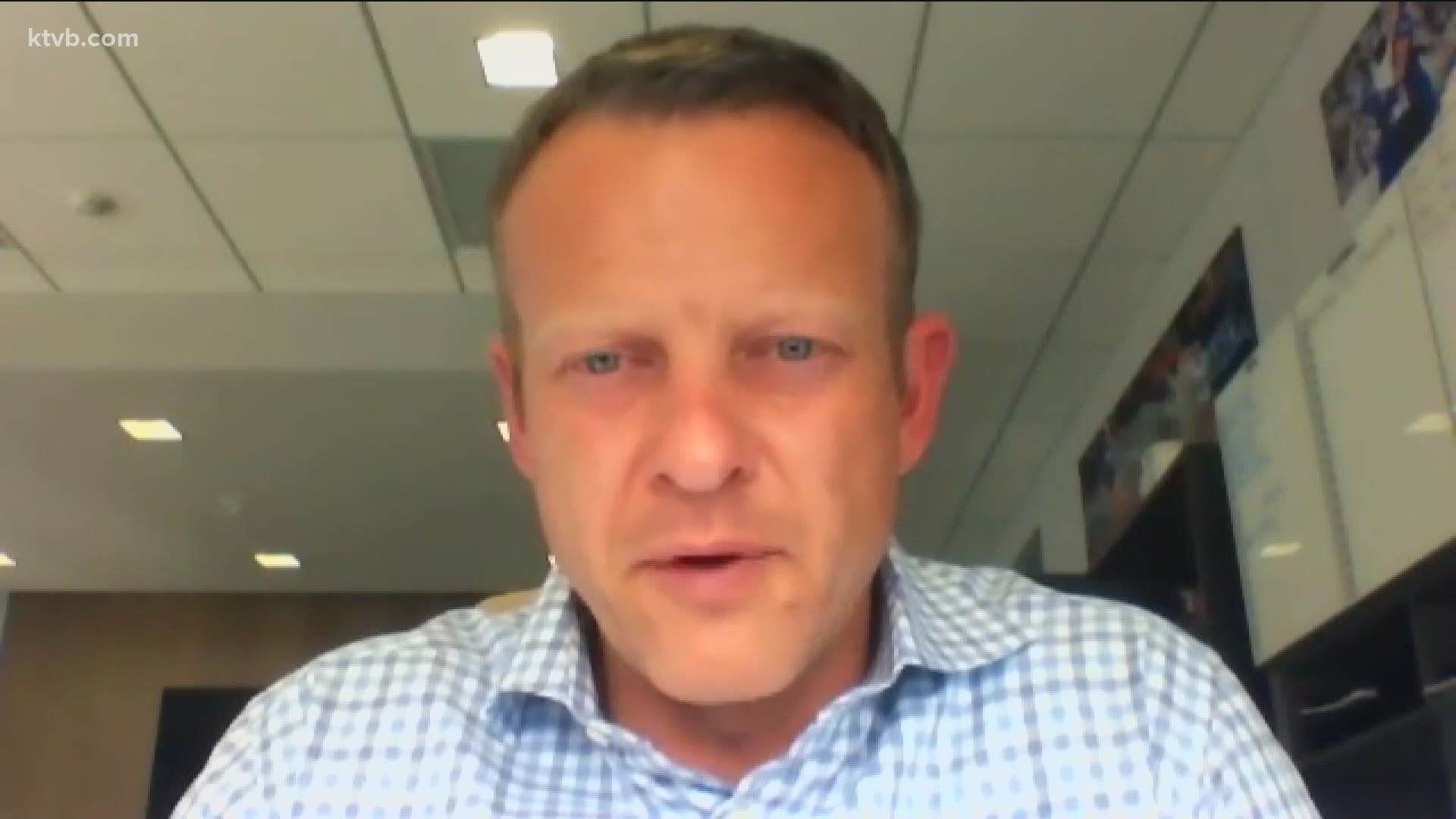 The Boise State faithful are being rewarded for staying up until the wee hours of the morning on Sunday to watch the Broncos beat Hawai'i.

This week, the Broncos will get to play a rare afternoon game when San Jose State visits the Blue on Saturday. What's more, it will be played in front of a major national audience.

The game is set to kick off at 2 p.m. and will air on Fox. It will be the first regular-season Boise State home game to air on one of the Big Four national networks since the 37-24 win over Oregon State on ABC in 2010.

Because of the worsening COVID-19 pandemic, Boise State has revised its attendance guidelines. For the previous two home games, about 1,100 people were allowed inside Albertsons Stadium, including immediate family members of players, band and spirit squad members, and a group of students who were selected by lottery.

This week, however, there will be a much smaller number of fans in attendance. Because it's Senior Day - the final home game for senior players - only parents of the seniors will be allowed in. That's about 30 people, according to the university. Unlike previous games, students, band members and the spirit squad will not be permitted to attend.

Boise State (4-1, 4-0 MW) is coming off a 40-32 win against the Rainbow Warriors (2-3, 2-3 MW) in Honolulu last weekend. The Broncos, who held a 23-point lead going into the fourth quarter, managed to hold off Hawai'i's comeback effort thanks to some magic by Khalil Shakir (11 receptions for 130 yards and two touchdowns) and Avery Williams (99-yard kickoff return for a touchdown). But the defense struggled, allowing the Warriors to rack up 275 yards and 29 points in the second half.

Make no mistake, #BoiseState wide receiver Khalil Shakir isn’t just have a good season, he’s having a historical great season that ranks amongst the best in program history.

Oh, and Avery Williams truly is one of a kind.#TuSTATS are currently cookin’...

RELATED: 'We found a way to win': Boise State coach Harsin and Broncos talk about their close win over Hawai'i

Meanwhile, San Jose State (4-0 MW) heads to Boise fresh off an unexpected bye week. The Spartans were scheduled to play Fresno State on Nov. 21, but the game was called a no-contest when the Bulldogs did not meet the required number of players because of COVID-19 protocols.

It was one of three Mountain West games that were canceled due to the pandemic. Fresno State's scheduled game against San Diego State this week has already been canceled.

One of the more surprising storylines this season, the undefeated Spartans squad has become a force to be reckoned with in the Mountain West. They'll be looking for their first-ever win against the Broncos, who have won the previous 14 contests between the teams.

The stakes are high as both teams eye a spot in the conference championship game. Due to the abbreviated season, the two teams with the best conference winning percentage, regardless of division, will pay for the Mountain West trophy. Right now, Nevada (5-0), Boise State (4-0) San Jose State (4-0) are undefeated. That will obviously change after Saturday's game.

"Well, number one, I don't think you're making the championship unless you win every game," Boise State coach Bryan Harsin said at his weekly press conference on Monday. "So yeah, it's a big game - big game for a lot of reasons: they're undefeated, it's Senior Night."

For his part, SJSU coach Brent Brennan said on Monday that his team was disappointed that last week's matchup against Fresno State was canceled, but there is a silver lining in that it gave them more time to get ready for the Broncos.

"Not getting to play a game last weekend I think feels funny because we were kinda in game mode and we were playing good football," Brennan said. "But it gives us a chance to get ready for this one, which is obviously one of those huge games that is gonna be on national TV and it's got all the awesome stuff that you hope and dream for, for your players. And so, we'll be excited to play."

The game will be televised on Fox (Tim Brando, Spencer Tillman), which can be found on the following channels:

The game will stream live on the Fox Sports website, as well on the Fox Sports mobile app, available in Apple and Android app stores. The service is only available to subscribers of participating cable or satellite television providers (including Sparklight, Dish Network, DirecTV, Hulu, Fubo and more).

KTVB's Bronco Roundup Game Day show will be live from Albertsons Stadium before the game from 1 to 2 p.m. on KTVB, KTVB.COM, and on the KTVB mobile app.

For the fourth-straight game, a number of Broncos did not play last weekend due to COVID-19 concerns. Boise State announced before the Hawai'i game that 12 players did not travel because they either tested positive for COVID-19 or came into close contact with someone who had the virus. The good news is that the number of players disqualified for the game decreased for the first time. Fourteen players missed the game against Colorado State the week before.

The university has remained tight-lipped about players who have been ruled out, and does not name them, but instead releases a full list of players who will be unavailable - including those who have been injured or are out for other reasons - shortly before kickoff. Thus, there is no word on who will play and who won't against the Spartans on Saturday afternoon.

Boise State is one of the few Mountain West teams that has not yet had a game canceled because of the pandemic. Just last week, three conference games - including San Jose State's game against Fresno State - were canceled due to coronavirus cases within football programs.

Unfortunately for Fresno State, they will have to forgo a game for the second week in a row. Because of continued COVID-19 cases, the Bulldogs' scheduled game against San Diego State on Friday has been canceled.

This year, due to the pandemic forcing a shortened season, the conference is doing away with divisions to determine who will play in the championship game. Instead, the top two teams in terms of conference game win percentage will play for the Mountain West trophy at the end of the season.

The Broncos' lone loss - to BYU on Nov. 6 - will not count against them in the conference race because the Cougars are not members of the Mountain West.

Nevada will travel to Hawai'i this week to face the Rainbow Warriors in a late Saturday night game - the same time slot as last weekend's Broncos-Warriors game.

If Nevada wins, the Wolfpack and the winner of the Boise State-SJSU game will be in the driver's seat when it comes to jockeying for position in the title game.

WILLIAMS DOES IT AGAIN

Avery Williams has been nothing short of spectacular on special teams this year. He is the only player in the nation to rank in the top 10 nationally in both kickoff returns (8th; 29.6) and punt returns (8th; 13.3). He's also one of three players in the country to have two kickoff returns for a touchdown this season. And he's the only player with three scores on special teams.

In his Scott Slant column on Monday, KTVB sports analyst Tom Scott breaks down Williams' fantastic game against the Warriors and looks back at how he burst onto the scene three years ago:

Avery Williams was a game-changer again on Saturday night. Hawaii had just pulled to within 10 points of Boise State on its opening possession of the second half, an 87-yard drive that would foretell the difficulties the Broncos would have the rest of the game. But Williams returned the ensuing kickoff 99 yards for a score to regain some momentum. It was his third special teams touchdown in four weeks. Williams also set up TDs with punt returns of 34 and 36 yards. The Broncos may have been in trouble without his heroics, but they held on for a 40-32 win to stay unbeaten in the Mountain West. The guy is money.

Did anyone think Williams’ first touch as a Boise State Bronco would be such a huge omen? Williams, then a redshirt freshman, took a punt return 81 yards to the house in the season opener against Troy in 2017. Originally a walk-on, he had been placed on scholarship just a month earlier. Since then, Williams has scored four other touchdowns on punt runbacks and three on kickoff returns—eight total career TDs on returns, the most among active players in the country. My KTVB colleague Jay Tust compiled a list of every FBS player with five-plus career punt return TDs and three-plus career kickoff return TDs over the last 20 years. Williams is the only one on it.

Just compiled a list of every FBS player with 5+ career punt return TDs and 3+ career kickoff return TDs over the last 20 years.

Traditionally, Senior Day (or Night, depending on what time the game is played) is the final regular-season home game for senior players. This year, though, is different. Because of the pandemic, the NCAA ruled that all seniors will get an extra year of eligibility.

At this point, according to coach Bryan Harsin, there have been no decisions made about who's coming back next year.

“Every university’s going to be different,” Harsin said. “We haven’t gotten to who’s coming back or things like that.”

With an incoming recruiting class, the university won't have room on the roster for every senior to return. So that's a question without an answer for the time being.

As for Saturday's Senior Day, about 30 parents of seniors are expected to attend the game and will be the only fans in attendance.

“These seniors will run on the field, and we’ll have our moment,” Harsin said.

When Boise State and San Jose State meet on the Blue this Saturday, the Spartans will be looking for their first-ever win against the Broncos.

Boise State is 14-0 in the all-time series between the two teams.

Over the years, only a few of the games between these two teams have been close. Since the Broncos moved up to the FBS in 1996, they have beaten the Spartans by an average score of 45 to 18.5, with the most lopsided win coming in a 77-14 blowout on the Blue in 2003. The closest game between the teams was a 23-20 Broncos win in 2006.

Last year's game between the squads ended with a 52-42 Broncos win at CEFCU Stadium in San Jose.