After an ugly loss to BYU, the Broncos will look to get back on track when the Rams visit Albertsons Stadium Thursday night. 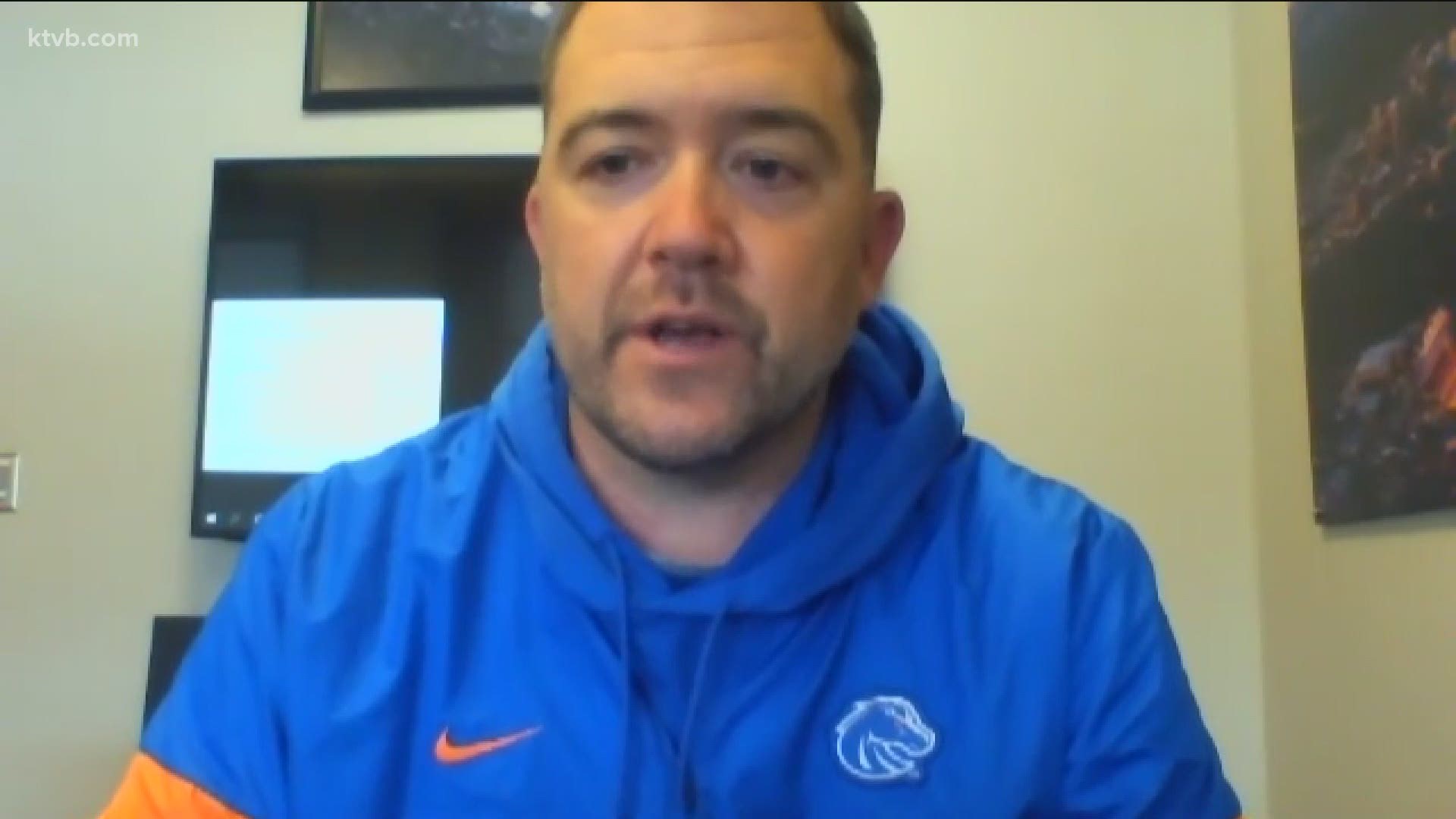 BOISE, Idaho — The Boise State football team hopes to move past its worst home loss in nearly a quarter-century when Colorado State comes to town for a Thursday night matchup of conference foes.

The game is set to kick off at 6:05 p.m. and will be televised nationally on FS1. Like last week's game, a limited number of fans, including family members of players and students, will be allowed into Albertsons Stadium for the game.

The Broncos (2-1, 2-0 MW) are coming off one of its most lopsided losses in decades, a 51-17 trouncing by No. 9 BYU. After backup quarterback Jack Sears went down with an apparent head injury early in the first quarter, Boise State was forced to go with its 4th- and 5th-string quarterbacks for the remainder of the game. To make matter worse, starting running back George Holani was still out with a leg injury. The result was the Broncos' offense could never really get going against a good Cougars defense.

Boise State's defense put up a valiant effort to try and contain Heisman hopeful Zach Wilson, but the offense's lack of production meant the defense was on the field for far too long on Friday night and eventually the flood gates opened, allowing Wilson and company to run roughshod over the Broncos.

Coach Bryan Harsin has not said whether starting quarterback Hank Bachmeier or Sears will be available for Thursday's game, other than to say, "I hope so. Nothing is season-ending for [Hank] ... and we'll see where Jack [Sears] is at."

Harsin is also hopeful that Holani will return from injury this week.

The BYU loss is a game players and fans would like to forget. But that would be counterproductive, according to Harsin, who said during his weekly news conference on Sunday that he's hoping his team will learn from the loss and then turn their complete focus to the task at hand.

"We're not going to forget about this," Harsin said. "You have to learn from hard times like this."

"Those hard times are not bad," he added. "Matter of fact, they help you, they help you develop what you need, for when the next one comes up, you've already been through it. And you're going to be able to know deep down in your soul, that I can handle this. And when you know you can handle something that is tough, watch out. Watch out."

Meanwhile, Colorado State (1-1 MW) is looking for its first-ever win against Boise State. The Rams bounced back from their season-opening loss to Fresno State by beating Wyoming 34-24 last Thursday night.

Led by quarterback Patrick O'Brien and helped by some key takeaways on defense, CSU snapped a four-game losing streak in the Border War, taking the Bronze Boot trophy back to Fort Collins for the first time since 2015.

Now the Rams turn their sights to the Broncos. CSU head coach Steve Addazio, in just his third game leading the program, said at his press conference on Monday that he's happy about the win over the Cowboys, but now his team must settle down and focus on this week's road game.

"I think if you're going to be a bonafide program, you've got to learn how to take each week one at a time and you can't ride the rollercoaster," Addazio said. "You play a rival game early, and if you win it, it's a great high, and if you lose it, it's a real low, but here comes the next week, and you're playing now an elite team in the league and you've got to get ready to go.

"I'm anxious to see our team, see how we do respond coming off a big win and how we get ready to play an elite opponent," he added.

The game will be televised on Fox Sports 1 (Alex Faust, Evan Moore), which can be found on the following channels:

The game will stream live on the Fox Sports website, as well on the Fox Sports mobile app, available in Apple and Android app stores. The service is only available to subscribers of participating cable and satellite television providers (including Sparklight, Dish Network, DirecTV, Hulu and more).

KTVB's Bronco Roundup Game Day show will be live from Albertsons Stadium before the game from 5 to 6 p.m. on KTVB, KTVB.COM, and on the KTVB mobile app.

FANS IN THE STANDS

For the second week in a row, Boise State will allow a limited number of fans into Albertsons Stadium for Thursday night's game. Central District Health gave approval for the plan, in which about 1,100 people, including immediate family members of players, band and spirit squad members, and about 500 students, will be able to watch the game in person.

The university will be required to adhere to the same protocols that were in effect for the BYU game: Fans must present a negative COVID-19 test before they'll be allowed inside. They must also wear masks and social distance while in the stadium.

Boise State held a lottery earlier this week to determine which students will get to attend the game.

Thursday's game against CSU is the second-consecutive non-Saturday game, giving the Broncos yet another short week to prepare for an opponent.

"This is the first time in school history that Boise State has gone Saturday to Friday to Thursday in consecutive weeks, losing a day of preparation for back-to-back games," Boise State said in a news release.

According to the school, the Broncos are 61-18 all-time in non-Saturday games and have never lost a home game on a Thursday. This will be the program's first Thursday game since a 28-14 win over New Mexico in 2017.

It's not often that Boise State gets utterly blown out at home. In fact, Friday's loss was the Broncos' worst in 24 years. So it's worth asking the question - what exactly happened?

In his Monday Scott Slant column, KTVB sports analyst Tom Scott aptly said, "the wheels fell off" the bus. It was truly a perfect storm of circumstances, combined with poor play, that resulted in what coach Bryan Harsin described as an "embarrassing" loss.

There have been clunkers like this during the Bryan Harsin era — think Air Force 2014, Utah State 2016, Virginia 2017. The Broncos bounced back from those. But this one felt different. Unlike those others, this was not an upset. The Cougars at times were toying with the Broncos. Don’t forget this, though: it was BYU’s eighth game of the season and Boise State’s third. The Cougars went through a traditional fall camp in August and have been playing together since. They’re a well-oiled machine.

Boise State’s hopes for an upset in this game went off the rails early. Even with Hank Bachmeier still sidelined, the Broncos brimmed with optimism as Jack Sears took the reins behind center for the second straight week. But when Sears was injured on a helmet hit midway through the first quarter, Boise State was in trouble.

Cade Fennegan tried, and Andy Peters tried, but it was too much to ask of the true freshmen to keep up with the No. 9 team in the country. Peters, a walk-on, just wrapped up his high school career at Timberline 12 months ago. Boise State averaged just 4.8 yards per play, and it was only that high because of 98 yards worth of touchdown passes pulled in by Khalil Shakir over a 10-second period in the fourth quarter.

MORE: Boise State football: In many ways, the wheels fell off

Not that he could have done it against BYU, but Boise State’s George Holani routinely turns two yards into six, and that advantage was absent Friday night. Andrew Van Buren took a pounding and gained only 45 yards on 16 carries, averaging 2.8 yards per tote. Van Buren looked like he had little left in the fourth quarter. And there was nobody behind him. Danny Smith is still not healthy enough to suit up, and the Broncos did not use Tyler Crowe, the walk-on from Skyview High who saw spot duty the previous week in the victory at Air Force. The lack of a running threat was just another reason the Boise State offense looked like it was driving on a flat tire.

Demitri Washington and his pass rush were missing for Boise State Friday night, as they will be the rest of the season. But that doesn’t explain the Broncos giving up 573 yards and 51 points. They hung in nicely until BYU’s back-breaking 96-yard touchdown drive late in the first half. After that, the defense wore down, and ultimately it came apart at the seams. Boise State sacked Zach Wilson three times, but otherwise he was camping out in the pocket. Cougars receivers were running free, and Wilson does not tend to miss an open target. It was concerning, because Boise State’s secondary was theoretically at full strength, with all four starters playing (plus nickel Kekaula Kaniho). There’s a lot to talk about inside the Bleymaier Football Center.

As noted above there were not very many positives to take away from last week's loss. However, one bright spot was the continued stellar play of junior wideout Khalil Shakir, who hauled in 10 catches for 139 yards, both new career highs.

We caught up with Boise State offensive coordinator Eric Kiesau to get his impression of Shakir's season to date.

"One, he does everything, he does it all," Kiesau said. "He is very productive. The second thing is his leadership ability. He's really starting to get out of his shell and really kind of be more vocal with the offense. He got in front of them two weeks ago at a walkthrough at the hotel and I got the chills, I was so fired up. He, I don't want to say lost his mind, but got all fired up, speaking from the heart, it was very moving. To see him do that is really good, especially for the offense, cause we need that type of leadership."

The Broncos are a perfect 9-0 in the all-time series against the Rams. The first game between the two teams came in 2011 - a 63-13 win in Fort Collins - during Boise State's first season in the Mountain West Conference.

While there have been a few more blowouts since that dominating win nearly a decade ago, the two programs have also played a couple of very close games, including a memorable matchup in 2017 when the Broncos came back from a 25-point deficit to beat the Rams in overtime.