It will be a battle of unbeaten, ranked teams when the Broncos and Cougars meet Friday night at Albertsons Stadium. 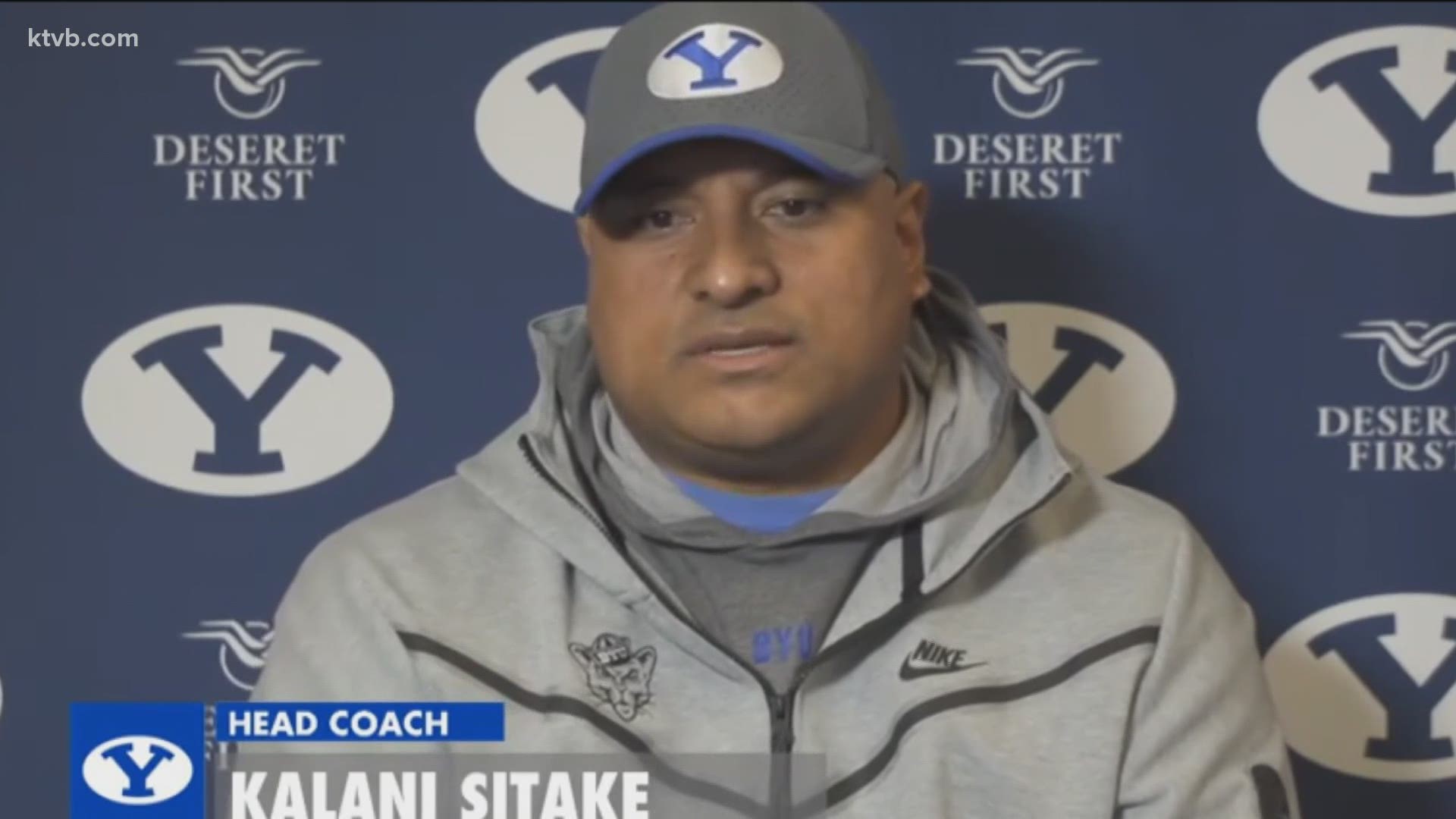 BOISE, Idaho — All eyes will be on Boise State and BYU Friday night as the two regional rivals meet on the blue turf of Albertsons Stadium for a highly-anticipated matchup of two of the top football programs in the West.

The stakes for this game are high. Boise State and BYU each have hopes of playing in a New Year's Six bowl game, making Friday night's a tilt a must-win for both teams. The Cougars would love to notch their first-ever win at Albertsons Stadium and the No. 21 Broncos would like nothing better than to send the 9th-ranked Cougars packing with a loss - as payback for last year's heartbreaking loss in Provo.

Friday's game is set to kick off at 7:55 p.m. and will be televised on Fox Sports 1 (FS1). Unlike the season-opener against Utah State, some fans will be allowed into the stadium for the game. At a meeting on Wednesday, Central District Health approved the university's request to allow approximately 1,100 people to attend the dame, including immediate family members of players, members of Boise State’s band and spirit squad and a limited number of students. Each will be required to pass a COVID-19 test and to wear face coverings while also social distancing from others in the stadium.

Boise State (2-0) is coming off a 49-30 win at Air Force last Saturday, a game that gave new meaning to the term "next man up." The Broncos were without several key players - including starting quarterback Hank Bachmeier and starting safety JL Skinner, neither of whom made the trip to Colorado Springs.

To make matters worse, the injury bug bit hard during the game, with running back George Holani, defensive end Demitri Washington and defensive tackle Scale Igiehon all leaving at various points in the game due to injuries. None of them returned to the game, forcing the Broncos to find a way to win without some of their biggest playmakers. But find a way they did.

USC transfer Jack Sears picked up where Bachmeier left off the week before, passing for 280 yards and three touchdowns. He rushed for an additional touchdown as well. On the ground, running back Andrew Van Buren racked up 70 rushing yards and two touchdowns.

And while the defense struggled to contain Air Force's vaunted triple-option offense in the first quarter, the unit improved significantly as the game went on, limiting big plays by the Falcons.

While Boise State has played just two games of its abbreviated season, the Cougars began their season back on Sept. 9 and have destroyed most of their competition ever since.

At No. 9, BYU (7-0) will be the highest-ranked opponent to visit Albertsons Stadium. Quarterback Zach Wilson - a former Boise State commit - has been playing lights-out all season long. In seven games so far this season, Wilson has amassed an eye-popping 2,152 passing yards (307 ypg), 19 touchdowns against just two interceptions, and boasts a 74.6% completion percentage.

Wilson's top two targets are Dax Milne and Gunner Romney, who have combined for 68 catches, 1,221 yards and eight touchdowns this season. Starting running back Tyler Allgeier is averaging 6.5 yards per carry and has seven touchdowns.

The Cougars have been good on defense too - albeit, against overmatched competition - having allowed an average of 281 total yards per game and just 11 touchdowns.

"This is a physical game that we are preparing for coming off another physical game against Air Force," Harsin said. "They've got a really good team, they've played more games than we've played."

For his part, BYU coach Kalani Sitake said on Monday that he has a lot of respect for Boise State and that his team will be prepared for the matchup.

"They're a difficult opponent and we respect them a lot," Sitake said of the Broncos. "Part of that respect is making sure that we're ready and give them our best shot because we know we're gonna get theirs."

The game will be televised on Fox Sports 1 (Aaron Goldsmith, Petros Papadakis), which can be found on the following channels:

The game will stream live on the Fox Sports website, as well on the Fox Sports mobile app, available in Apple and Android app stores. The service is only available to subscribers of participating cable and satellite television providers (including Sparklight, Dish Network, DirecTV, Hulu and more).

KTVB's Bronco Roundup Game Day show will be live from Albertsons Stadium before the game from 6 to 7 p.m. on KTVB, KTVB.COM, and on the KTVB mobile app.

Harsin announced during his press conference Tuesday morning that standout defensive end/STUD Demitri Washington will be out for the remainder of the season after he suffered a serious leg injury in the Air Force game. Harsin didn't give specifics about the injury but said Washington was scheduled to undergo an MRI on Tuesday.

"We feel terrible for him, he has worked so hard," Harsin said.

Junior college transfer Shane Irwin stepped in for Washington and played well, finishing the game with eight tackles, the second-most on the team. The only Bronco to log more tackles was nose tackle Keeghan Freeborn (9 tackles, 5 solo) who filled in for injured starter Scale Igiehon.

The injuries to defensive line starters hurt, particularly since the team was already trying to fill some major holes left by the departures of 2019 defensive standouts Curtis Weaver, David Moa, Sonatane Lui and Chase Hatada.

Fortunately for the Broncos, though, they have solid depth at nearly every position, and the backups played admirably against the Falcons.

Washington and Igiehon weren't the only players knocked out of last week's game. Starting running back George Holani went down with an apparent knee injury in the first quarter. Andrew Van Buren provided relief at the position, rushing for 70 yards on 12 carries and two touchdowns.

Adding to the adversity, starting quarterback Hank Bachmeier and starting safety JL Skinner did not make the trip to Colorado Springs, for undisclosed reasons, although Boise State confirmed that one player missed the game due to a positive COVID-19 test. Harsin would not say on Tuesday whether Bachmeier or Holani would be available for Friday's game against BYU. He did say, however, that Skinner was cleared to play.

"We'll figure out what this next week looks like and you guys know this - this is such an unusual year with so many different things, and that's part of what we are dealing with," Harsin said. "It's not a normal season where you know going into each and every week what is going to be the case with your players, and the situation that you're going to be in."

In the absence of Bachmeier, USC transfer Jack Sears had a stellar game, completing 17 of 20 passes for 280 yards, three touchdowns and no interceptions. He also rushed for a fourth touchdown.

“I think Jack played really well ... and gained a lot of confidence.”

In addition to their long-held mantra of defending The Blue, the Broncos will have extra motivation when BYU comes to town on Friday. When the teams met in Provo last year, BYU handed No. 14 Boise State its lone loss of the regular season. The 28-25 Cougars win snapped a three-game losing streak to the Broncos dating back to 2015.

Now it's the Broncos who would love to knock BYU from its perch in the polls.

Boise doesn't lose on the blue turf and they will want revenge from last season. The Broncos are currently 2-0 with wins over Utah State and Air Force, and also ranked in the top 25. Boise would love nothing more to do to the Cougars in Boise what BYU did to them last year in Provo. There is a lot of talk about New Year's Six invites and undefeated seasons for BYU, but national pundits seem to be forgetting about this game in Boise. And if BYU plays like they did against WKU you can say goodbye to those undefeated season hopes.

The Broncos began the season unranked in both the AP Top 25 and the Amway Coaches Poll. Now two games into the season and they are ranked No. 21 in the AP poll and No. 23 in the coaches poll.

The G5 teams currently ranked ahead of the Broncos are No. 6 Cincinnati, No. 15 Coastal Carolina, No. 16 Marshall, and No. 18 SMU. Liberty University is ranked behind Boise State at No. 25 in the AP poll.

Cincinnati (5-0) is in the driver's seat when it comes to earning the New Year's Six berth. The Bearcats have five games left on their schedule and will be favored in each one.

If the Broncos hope to play on or around New Year's Day, they'll need some help in the form of key losses by several teams ahead of them.

It's worth noting here that BYU is independent, so while the Cougars are currently ranked No. 9 in both polls, they are not guaranteed a spot in a New Year's Six bowl should they win out.

Two Boise State players were honored this week for their standout performances in Saturday's win over Air Force.

Senior cornerback and kick/punt returner Avery Williams was named the Mountain West Special Teams Player of the Week, and junior quarterback Jack Sears was named to the Manning Award's "Stars of the Week" list.

Sears, who joined the team in February as a graduate transfer from USC, made his first start for the Broncos on Saturday. He wasted little time sparking the offense, going deep for a 75-yard touchdown pass to CT Thomas on the game's first play from scrimmage. By game's end, Sears had completed 17 of 20 passes for 280 yards and three touchdowns. He rushed for a fourth TD while racking up 36 yards on the ground.

Boise State owns a 7-3 record over BYU in a series that began with the first game between the two teams back in 2003. The Cougars' 28-25 win in Provo last year snapped a three-game Broncos winning streak.

Boise State is 5-0 at home, but has a 2-3 record at Lavell Edwards Stadium.

Over the years, the Broncos and Cougars have played some close games - particularly in Boise. The last time BYU played in Albertsons Stadium - in 2018 - it took a defensive goal line stand by the Broncos to pull off the 21-16 win. Two years earlier, Boise State won 28-27 thanks to a blocked field goal in the final seconds of the game and a failed hail mary attempt by the Cougars.

In 2012, the first game in the current ten-year agreement, the teams combined for just 13 total points. The Broncos won the defensive slugfest 7-6 thanks to a third-quarter pick-six by Michael Atkinson.

Last year, Boise State and BYU announced that they will extend their series for another ten years - until 2034.