Here's everything that Bronco Nation needs to know about Boise State's rivalry matchup against Fresno State. 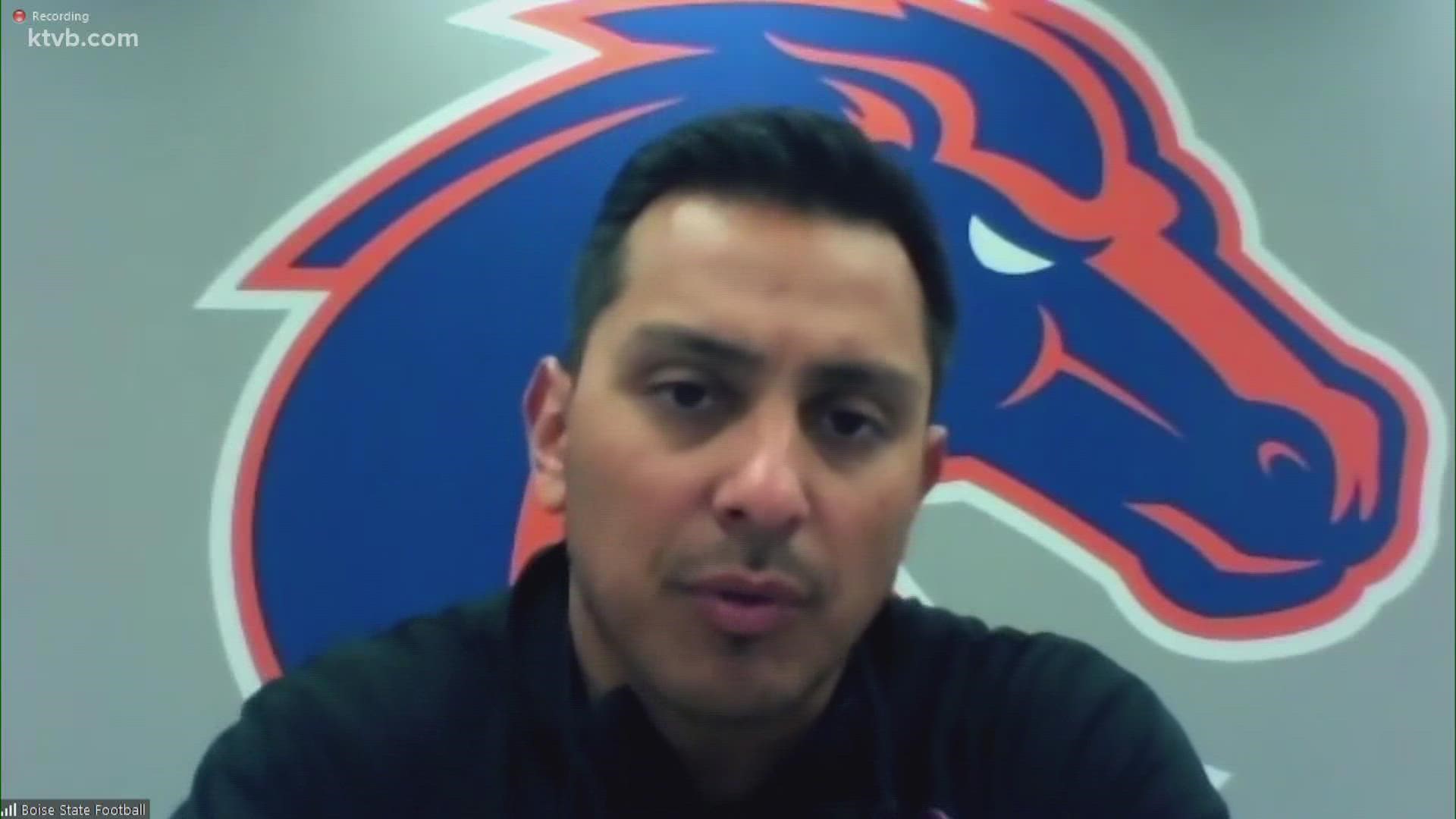 BOISE, Idaho — Editor's note: The above video was originally posted on Nov. 1.

The Broncos are scheduled to take on WAC-era rival Fresno State at Bulldog Stadium on Saturday, Nov. 6 at 5 p.m. MT.

In the first College Football Playoff rankings released this week, two Mountain West Conference teams appeared in the Top 25 - the Fresno State Bulldogs at 23 and the San Diego State Aztecs at number 24. The Broncos will play both teams on the road this season, starting with the Bulldogs on Saturday, Nov. 6.

In the Selection Committee's first rankings of the 2021 season, two other Boise State opponents were ranked. The Brigham Young Cougars, who the Broncos beat 26-17, were ranked fifteenth overall and the Oklahoma State Cowboys, who beat the Broncos 21-20, were ranked eleventh overall.

The Bulldogs are returning to Fresno after they went on the road last week to beat the Aztecs 30-20. The Broncos will head down to California looking to put together their first winning streak of the season and to get another win over a Top 25 team.

Fresno State's two losses on the season come from No. 11 Oregon, who beat them 31-24 in Eugene, OR in week two, and the Hawai'i Rainbow Warriors, who beat the Bulldogs 27-24 in Honolulu in week six.

Boise State will head into Fresno amidst an unusual season for the Broncos. First-year head coach Andy Avalos and his coaching staff have made it clear that they're well aware that a 3-4 and a 4-4 record is far from the standard of Bronco football.

However, the Broncos have flashed signs of great potential. Boise State was a blocked field goal away from beating No. 11 Oklahoma State and self-inflicted wounds doomed their chances against Nevada and Air Force. Four second-half turnovers against the Wolfpack and Falcons derailed any chances for come-from-behind wins.

During the rivalry game, Avalos and the Broncos' coaching staff will see some familiar faces on the opposing sideline.

"Those guys are awesome," Avalos said during Monday's press conference. "They've obviously done a tremendous job there. They are great men and great coaches."

Kirby Moore, the brother of Boise State great Kellen Moore, played for the Broncos from 2009 to 2013 as a wide receiver and is now entering his fifth year as an assistant coach at Fresno State.

During his time at Boise State, Kirby Moore was roommates with Matt Miller, who also played wide receiver for the Broncos from 2011 to 2014, is now the wide receivers coach for Boise State.

The former teammates are now both coaching the same position that they played at Boise State and during coaches interviews, Miller told reporters that he wishes Moore's players the best but hopes the Broncos beat the Bulldogs.

"So super happy for Kirby, he's done a nice job with those guys down there and they're fun to watch," Miller said.

However, Miller explained that it's the Bulldogs' fast defense that he's looking out for.

"We got to do a great job of establishing the run, have a great protection plan, get our playmakers on the outside and some of these guys in the running back and tight end room opportunities to go make plays," he said.

Former Boise State linebacker Tyson Maeva is also on Fresno State's roster. The former Bronco was dismissed from the team prior to the First Responder Bowl in the 2018 season. He transferred to Florida Internation University in 2019 and played four games there in 2020.

Maeva then transferred again to Fresno State, where he has become a defensive force with 41 tackles in 2021, second on the team for most tackles.

For the Bulldogs, second-year Fresno State head coach Kalen DeBoer said in their weekly press conference that the team is ready for anything in their second-straight rivalry game. Last week, the Bulldogs beat then-No. 21 and undefeated San Diego State 30-20 in the Battle for the Oil Can.

"There is so much to play for, even beyond the rivalry that exists with us and Boise State," DeBoer said. "So we expect everything and anything coming at us on Saturday."

Bulldog Stadium has sold out ahead of Saturday's rivalry, Fresno State's first sellout home game since 2014.

KTVB's Bronco Roundup Game Day show will be live on KTVB Channel 7.1 and KTVB.COM from 9 a.m. to 10 a.m. MT Saturday. Join Jay Tust and Will Hall for a look at all of the major storylines surrounding this matchup. KTVB's sports team will feature interviews and updates from former and current players during the show.

The Boise State Broncos and Fresno State Bulldogs haven't met for the Milk Can since November 2018, when the Broncos won the rivalry trophy after beating the Bulldogs 24-17 on The Blue.

However, the two rivals last met in the Mountain West Conference Championship in 2018 just a few short weeks after the Broncos won the Milk Can. On Dec. 1, 2018, the Bulldogs beat the Broncos in a snowy conference championship on The Blue.

Before 2000, the Broncos and Bulldogs meet three times - once a decade through the 1970s, 80s and the 90s - and the Bulldogs swept the Broncos 3-0. In 2001, the two started playing annually as members of the Western Athletic Conference. Their first conference game was Boise State's historic win over an Associated Press Top 10 team.

In 2005, the rivalry trophy was introduced - the Milk Can. The origins of the Broncos' sole rivalry trophy were traced back to dairy farmers in the Treasure Valley and the San Joaquin Valley, where Fresno State's campus is located, who decided to create a trophy to become more involved in their local university's athletic programs.

The rivals met every season between 2001 and 2014 and they have only played against each other four times since then, including in two Mountain West Conference Championships. In 2014, 2017 and 2018, the last three times the two teams have battled over the Milk Can, they eventually went on to play each other in the conference title game each time.

"Those were some highly contested games and don't expect anything but that," Fresno State head coach Kalen DeBoer said.

Since the two rivals reside in opposing divisions of the Mountain West, they don't always meet every season. However, the Bulldogs are set to travel to Boise in 2022 to take on the Broncos. 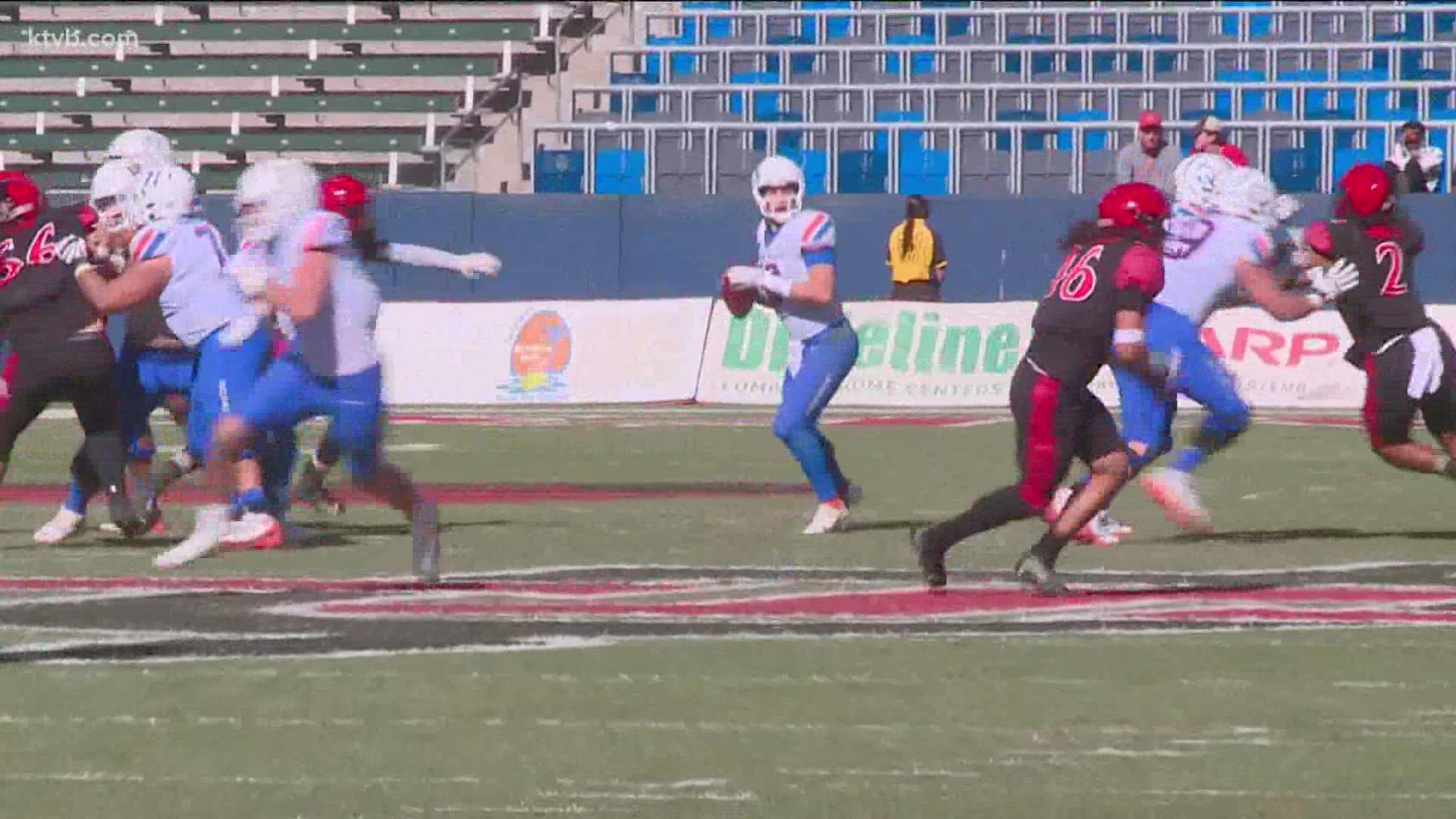