The Warriors will be looking for payback after two losses to Broncos last season. 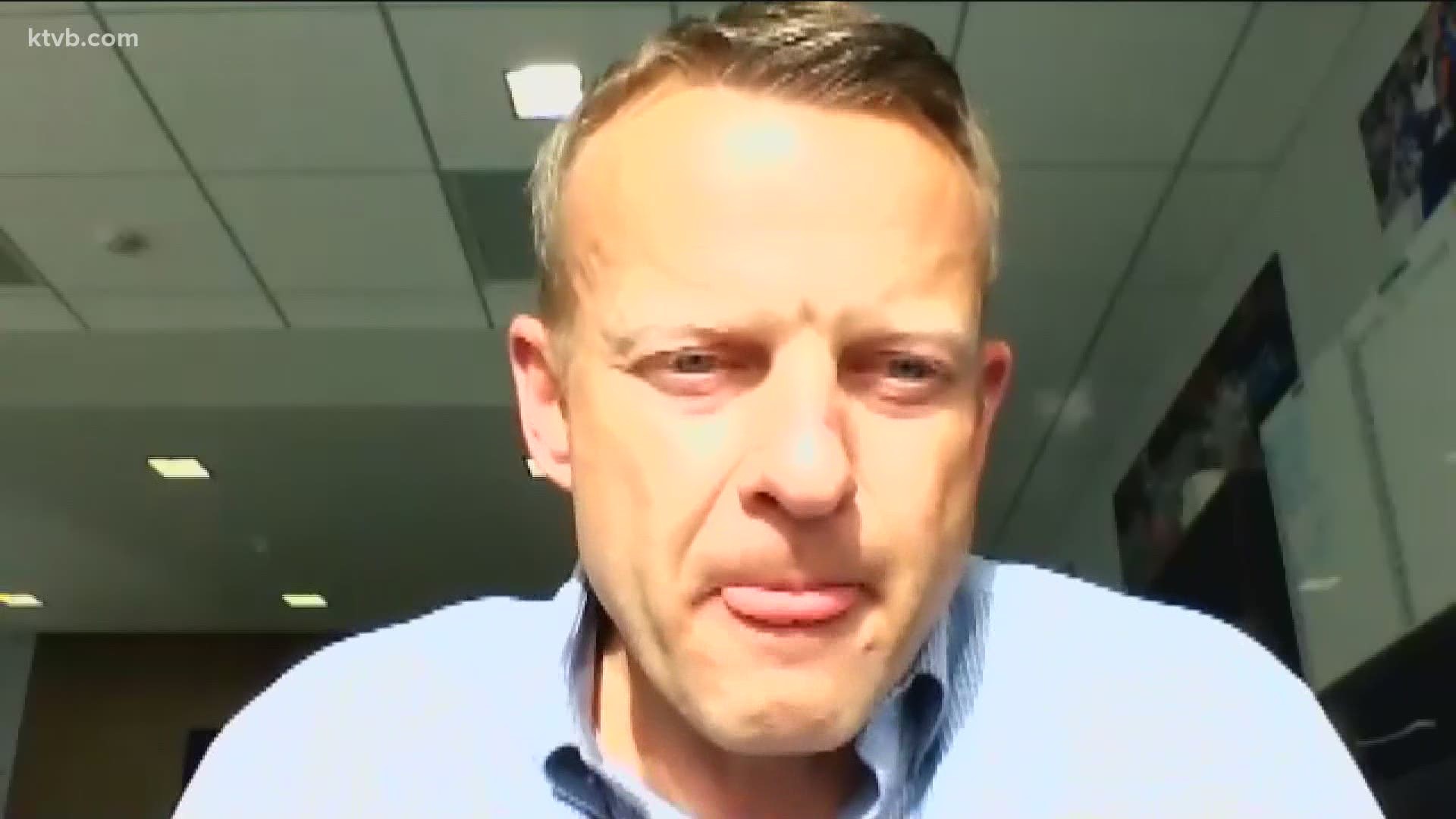 BOISE, Idaho — The Boise State football team is set to travel to Honolulu for a Saturday night matchup against the Hawai'i Rainbow Warriors, barring any COVID-19 complications.

The game is set to kick off at 9 p.m. Mountain Time and will be televised nationally on CBS Sports Network.

The Broncos (3-1, 3-0 MW) are scheduled to leave for the islands on Friday, but each player must test negative for coronavirus within 72 hours prior to arriving on Oahu. This is important because the team has, like much of the nation, experienced a sharp increase in cases over the past couple of weeks.

Already this week, more than a dozen college football games, including three Mountain West Conference games, scheduled for this weekend have been canceled due to outbreaks within football programs.

During last Thursday's game against Colorado State, Boise State had 14 players out due to COVID-19, with nine of them testing positive for the virus.

At his weekly press conference on Monday, Coach Bryan Harsin was optimistic that this weekend's game will go on as planned, despite the close call last week, particularly on the defensive line.

"It's not in jeopardy right now," he said. "But we still have a couple more tests throughout the week. Last week, the challenge, we got to a point where you're using an offensive lineman as a defensive lineman, you're at that point."

Per Mountain West requirements, all players and coaches must get tested for COVID-19 three times per week. Boise State has not released any information about positive tests so far this week.

Assuming the game actually happens, the Broncos will be facing the Rainbow Warriors (2-2 MW) for the third time in a little over a year. Hawai'i traveled to Boise twice in 2019 - for a regular-season game on Oct. 12 and the Mountain West Championship game on Dec. 7. The Broncos won each game by about three touchdowns.

But traveling to Honolulu always brings with it an added level of difficulty. In fact, all three of Boise State's all-time losses to Hawai'i have occurred at Aloha Stadium.

The Rainbow Warriors are rebuilding after losing star quarterback Cole McDonald and all-Mountain West receiver Cedric Byrd to graduation. The team also has a new coach this year - Todd Graham - who was hired after Nick Rolovich (the 2019 MWC coach of the year) left for Washington State.

Hawai'i is coming off a 34-10 loss to San Diego State, which saw the Warriors struggle, particularly on offense. Quarterback Chevan Cordeiro was sacked seven times and the Warriors fumbled the ball six times.

Cordeiro threw for 209 yards and one touchdown against one interception. His top target was Calvin Turner, who had 116 yards, 75 of which came on the touchdown pass from Cordeiro.

As for facing the Broncos this week, Graham said at his weekly press conference that he is fully aware of the Broncos' dominance in the league and the challenge facing his squad.

"Obviously, this is the best team, this is is the team that sets the standard in this league," Graham said. "So it's a great opportunity for us."

Like Harsin and every other coach in the nation right now, Graham said coronavirus is a major concern for his team as well.

"That's probably been the most challenging thing," he said. "I think it's really been challenging from an offensive standpoint to be able to execute anything. It really is hard to get better fundamentally when you don't have the same people practicing every day.

"Every week that we play, I get up that morning, and when I walk out there on that field, I'm so thankful and blessed that we're getting to play football," he added. "So hopefully we'll be playing football here on Saturday."

The game will be televised on CBS Sports Network (John Sadak, Randy Cross), which can be found on the following channels:

KTVB's Bronco Roundup Game Day show will be live from 7 to 8 p.m Saturday evening on KTVB, KTVB.COM, and on the KTVB mobile app. Join Jay Tust, Will Hall for a look at all of the major storylines surrounding this matchup.

Boise State fans know full-well what kind of impact a positive COVID-19 test can have on the outcome of a game. This week we learned, officially, that starting quarterback Hank Bachmeier tested positive for the virus earlier this season, ruling him out for the games against Air Force and BYU.

"I tested positive for COVID-19," Bachmeier confirmed on Monday. "I was not cleared until the day after the BYU game."

Of course, the BYU game is one that Boise State fans would like to forget. With Bachmeier out, backup Jack Sears appeared to be on pace for another great game - he threw for 280 yards and three touchdowns against Air Force the week before - but he went down after taking an apparent hit to the head midway through the first quarter. With Chase Cord sill nursing an ongoing injury, it was down to the Broncos fourth- and fifth-string quarterbacks. The result was a 51-17 beatdown at the hands of the then-No. 9 Cougars.

"I mean it was very frustrating not to be out there with my teammates," Bachmeier said. "Kind of watched what happened and it was frustrating for sure, but it makes you appreciate just playing ball and getting after it every single day."

Bachmeier returned to action last week against Colorado State, leading the Broncos to a 52-21 win over the Rams.

But since the Air Force game, when Bachmeier was the only player out due to coronavirus, the numbers of players testing positive has increased significantly.

KTVB sports analyst Tom Scott pointed out in Monday's Scott Slant column that the team is "at a critical juncture" when it comes to the pandemic:

Except for the lucky 1,100 the past two weeks in Albertsons Stadium, Broncos fans have been yanked out of their fall routine. But that’s nothing compared to what the Broncos themselves are going through. They beat Colorado State 52-21 last Thursday despite being perilously close to the minimum number of players required on the offensive and defensive lines. One O-lineman, Ben Dooley, played both ways, something you rarely (if ever) see at the FBS level. Boise State has until Friday to see if it can overcome a combination of COVID-19 and injuries to put enough players on the plane across the Pacific to Honolulu. Be thankful for the four games you’ve seen.

There were 14 Boise State players out last Thursday night due to COVID-19 protocols, with nine of them testing positive. This is why the NCAA gave everyone a mulligan this year, granting players an extra year of eligibility. The Broncos are halfway through their eight-game regular season, and it’s beginning to look like they’ll be fortunate to see it through to the finish line. There were 15 games canceled this past week affecting eight of the 10 FBS conferences.

As of Thursday, there have been at least 15 games canceled or postponed due to COVID-19, including three Mountain West games - Utah State at Wyoming; UNLV at Colorado State; and San Jose State at Fresno State.

Utah State, Fresno State and UNLV are experiencing outbreaks that forced the league to cancel the games for this weekend. UNLV vs CSU could be rescheduled for a later date, but according to the Mountain West, the USU vs Wyoming game and the San Jose State vs Fresno State will not be rescheduled.

RELATED: CSU's football game against UNLV will not take place on Saturday

The Broncos are on a roll when it comes to conference opponents. They have won 12-straight games against Mountain West teams, which is the second-longest streak in the nation behind only Ohio State (18).

Boise State has also 17-straight regular-season conference games, ranking third in Mountain West history. The Broncos can tie for the second-longest streak (18 by BYU from 2006-08) with a win on Saturday.

ACCOLADES FOR WILLIAMS AND KANIHO

Avery blocked two kicks and recovered one of them for a touchdown during the 52-21 win over the Rams. The other blocked punt was scooped by DJ Schramm and returned 20 yards for a touchdown.

Williams also averaged 12.1 yards per punt return, with a long of 33. This was Williams' second special teams player of the week honor this season and the fifth of his career.

Another Bronco is getting accolades for his performance both on and off the field. Senior nickel Kekaula Kaniho had a great game against CSU, scoring a touchdown on a 91-yard return of a blocked field goal, and logging eight tackles.

Off the field, Kaniho was recognized for his academic performance. He has been named one of 12 members of the National Football Foundations 2020 Scholar-Athlete Class.

He's also a finalist for the William V. Campbell Trophy, which earned him a postgraduate scholarship worth $18,000.

Boise State leads the all-time series 14-3 against Hawai'i and has won the last eight meetings between the teams since a 39-27 defeat in Honolulu back in 2007.

Prior to the loss 13 years ago, the Broncos won six straight as conference foes in the WAC.

The last meeting between the teams was a 31-10 Broncos win in the 2019 Mountain West Championship Game, which came just about two months after the Warriors' previous visit to Albertsons Stadium - a 59-37 Boise State victory.