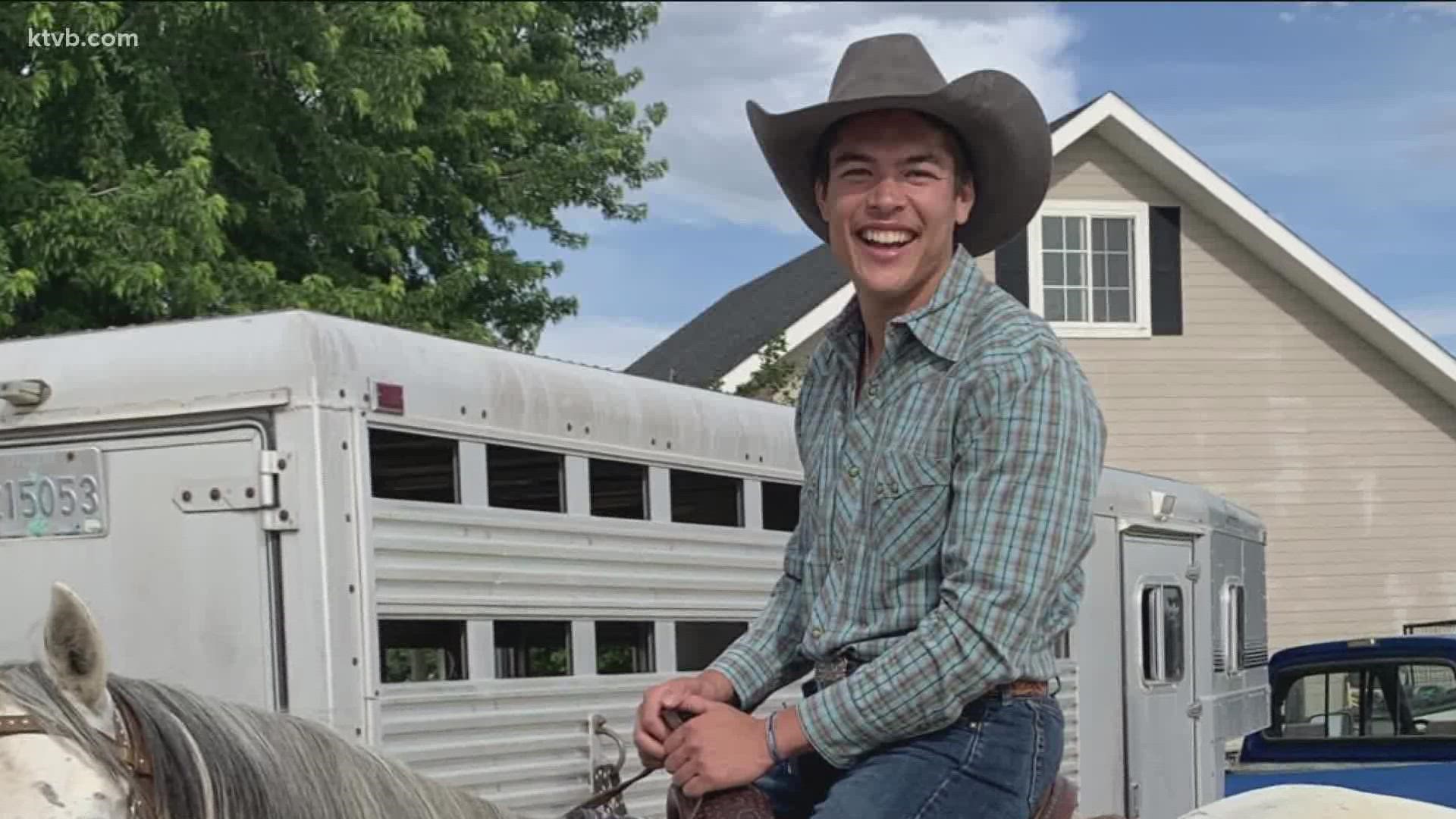 BOISE, Idaho — The life of a walk-on opens the door of a dream opportunity and only leaves student-athletes wanting more and forces one to work and fight every day so they can reveal and redeem their true value to a team.

This summer, with the sun ready to rise on his third season at Boise State, sophomore tight end Tyler Eiguren finally received that validation.

"Growing up around here, I always came to the games and watched Boise State," Eiguren said. "To be able to actually realize that dream, it's a pretty cool opportunity."

"I was surprised," he said. "I thought it was really cool how they did it, up there on Table Rock."

Eiguren added that it was deeply rewarding to have the entire Boise State football team there to congratulate and celebrate the Idaho native.

The Broncos' starting quarterback, junior Hank Bachmeier said Eiguren is deserving of a scholarship and it's an honor to be his teammate and friend.

"It just kind of reminds you if you put your mind to something and you work hard, and you do all the things you suppose to do, good things happen to you," Eiguren said.

Fifty miles to the west of Boise, a small town that's light on numbers, but heavy on talent and toughness, can be found.

"There's a lot of really cool things that come from growing up in a small town. A lot of things you learn, like work ethic. I think a lot of that has to do with where I grew up and who I grew up around," Eiguren said.

Fruitland, Idaho, where everybody knows everyone, according to Eiguren.

The small town has produced more scholar shipped Boise State football players than just about any other town in America over the last decade, including guys like Joey Martarano, Alec Dhaenans and Garrett Larsen, who all once starred for the Broncos. For Tyler Eiguren, a current member of the team, those trailblazers proved a path for him to follow along.

"You'd shake a player's hand and you thought it was the coolest thing when you were a little kid. You always wanted to run out on The Blue. It's kind of like a dream come true," Eiguren said.

Down one of the back roads in Fruitland, the Eiguren Ranch can be found. The seven-acre ranch is grounds that instilled a blue-collar mentality in Eiguren, long before he actually got the chant to drape it around his neck at Boise State.

"Ranch lifestyle, I think it makes a big difference. You don't get to just quit because it gets a little bit tough," Eiguren said.

For the Fruitland native, he wouldn't have wanted to grow up any other way.

Over the last three years, Eiguren's small-town lifestyle piqued the interest of his big-city teammates.

"A majority of our team is from somewhere in California. It's just a lot different," Eiguren explained.

"For us, it's just everyday life, so I don't know that it's so cool. I mean, I think it's definitely culture shock," Jane Eiguren, Tyler's mother, said.

Oo the Eiguren Family kindly volunteered to show the Broncos what these broncos are all about.

It started with one, then it turned into some. Before long, almost half the team had made the have 50-mile trek, which seemed a world away from what they deemed normal.

"We try not to laugh at them. Sometimes though, they get going way faster than they can handle. It's kind of like out-kicking their coverage," Jason Eiguren, Tyler's father said.

The list includes wide receivers C-T Thomas and Khalil Shakir, who Eiguren said was terrified, along with every player in Eiguren's tight-end position group and more.

"Even Shakir, as fast as he can run, when you get horseback, they're moving a lot faster," Eiguren's father said.

The most comical cowboys of them all though is quarterback Hank Bachmeier, who is better known as Hillbilly Hank and will jump at any opportunity to board the pony express to Fruitland.

"Hank thinks that he's going to be a cowboy one day," Eiguren said.

"I think I'm up there. John Wayne-esque," Bachmeier said. "I'll get moving a little bit. They've got to tell me to slow down sometimes, because I'll get going fast."

"Hank has worked the hardest at it. He's been here multiple times," Jason Eiguren said.

It's been such a fun affiliation, that the Eiguren simply preferred to always keep him around. Jane Eiguren told KTVB that the family even named a horse after Bachmeier.

"It's fun to have them experience this because they haven't. It's been really fun having them out here," Tyler's mom said.

It is only a matter of time before these big boys gallop back home after their playing days are done but when they do, they can claim they've experienced what Idaho is truly like.

"When you come to a place like Fruitland, life is still pretty real," Jason Eiguren said. "I think that's why those kids like to come here."

"It's very humbling to just kind of go out there and get away from everything," Bachmeier said.