This is the second time that a freshman has been named the starting quarterback for the Boise State Broncos under Bryan Harsin. 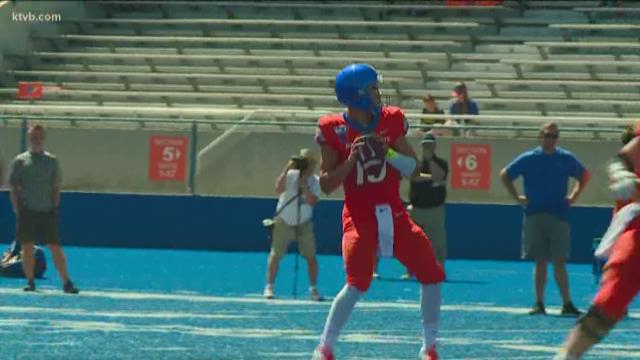 This is the second time under Harsin's tenure as head coach that a freshman was named the starting quarterback.

"Hank, deservedly, is the quarterback right now, and he knows that and I think that room respects that, and I also think that room is going to continue to compete," Harsin said.

Bachmeier enrolled early at Boise State as one of the most acclaimed signees in Broncos history. He graduated high school a semester early so he could arrive in Boise during winter.

Arriving early gave Bachmeier more time to compete for the starting quarterback position and climb his way up the depth charts.

"I feel like he's put himself in the position, consistently, through the practices that we've seen him, to go out there and right now, be the best guy," Harsin said. “Hank put himself in this position. He earned it.”

In our way-too-early preview of the 2019 season, we said that Bachmeier, "Will see the opportunity to become the Broncos' next four-year starter if he succeeds during camp. His high school stats are eye-popping as a pro-style quarterback."

In high school, Bachmeier threw for 10,001 passing yards, 124 passing touchdowns and only 21 interceptions as a three-year starter at Murrieta Valley in California.

Bachmeier beat sophomore Chase Cord and junior Jaylen Henderson for the starting quarterback position. Cord saw the most playing time out of the returning quarterbacks for Boise State but tore his ACL last season.

Just days ago, freshman quarterback Kaiden Bennett, who was in the same recruiting class as Bachmeier, announced that he is planning on transferring out of Boise State.

Bachmeier's first-ever starting matchup will be against the Florida State Seminoles on Saturday, Aug. 31.

The last time a freshman was named the starter was with Brett Rypien, who started for the Broncos for four seasons and rewrote much of the Broncos and the Mountain West Conference's passing records.