In addition to the economic losses, KTVB sports analyst Tom Scott said the canceled football season will leave an unprecedented void for players and fans this fall. 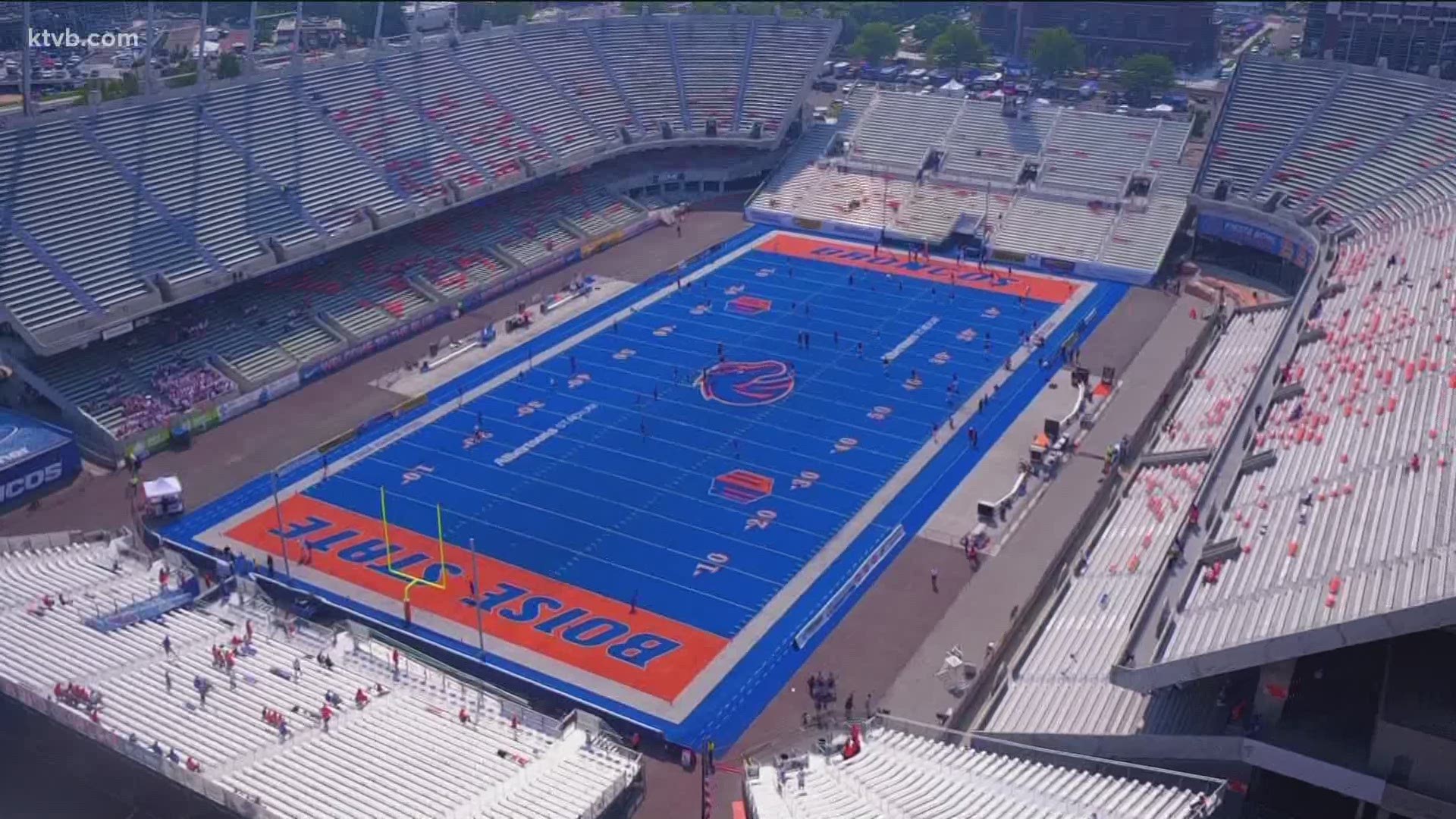 BOISE, Idaho — The Boise State Broncos will not play fall football this season.

A decision to cancel all 2020 fall sports was made Monday afternoon by presidents of the Mountain West Conference because of health and safety concerns due to the COVID-19 pandemic.

The conference is considering playing football in the spring but has yet to make a final decision.

Albertsons Stadium sitting quiet this fall brings a major blow to both the university and the Treasure Valley's economy, potentially costing more than $30 million in economic losses.

Estimates from the Boise Convention and Visitors Bureau show that losing a full stadium of around 33,000 people would lead to roughly a $2.2 million dollar drop in business sales per game.

Those estimates factor in restaurants, hotels, air travel and other entities that see a boost from Bronco game days.

Take that $2.2 million and factor it into the seven home games that were scheduled for Boise State this season and that means the local economy could suffer a $15.4 million loss in business sales.

Even if football were to continue and Albertson's Stadium were filled to approximately a quarter of its capacity, around 9,000 people, business sales would still drop more than $661,000 per game. That would mean $4.6 million would still be lost for the home games, even with the stadium partially filled.

The official release from @MountainWest on the postponement of fall sports pic.twitter.com/fOUSmuOMKe

As for Boise State itself, it would suffer around a $20 million deficit. The Idaho Press broke down projections from the university, which show a $12.2 million loss in ticket sales, $7.2 million lost through TV revenue and playoff payments and approximately another $3 million would be lost in concessions, merchandise sales and parking.

The university would save about $3 million in game day expenses. Those numbers give the university about a $20 million loss.

"Boise State is probably the biggest national brand in the group of 5," said KTVB sports analyst Tom Scott. "So it's a familiar TV brand across the country. TV revenue isn't as big for Boise State's level as probably it should be but that's still significant."

But Scott said there's more than just a financial hit. There's also an impact on the team.

"I think about the players and all they have invested in the program and in preparation and the time they put in that nobody sees," he said. "You have seniors like Jalen Walker and John Bates who are NFL prospects – what are they going to do?"

It will also be a long, quiet fall for Boise State fans.

“Fall camp should be underway, and you should be talking about the battle at quarterback and how is George Holani going to do and who’s going to be on the defensive line and what’s it going to like against Georgia State and Florida State coming to town in September? Scott said. "All of those things are gone now. There’s an empty August ahead of us, an empty September, October, November. And it’s just incalculable how this wears on the minds of the Boise State fans.

"It's just part of our fabric," he added. "It's part of our being here in the Treasure Valley."

The Mid-American Conference has also canceled its football season due to COVID-19. The Big 10 conference is expected to make a formal announcement about its cancellation on Tuesday. Other major conferences, including the Pac-12, could soon follow suit.

MORE: MAC postpones most fall sports until spring due to COVID-19 pandemic, including football

RELATED: 66 players opt out of NFL season due to coronavirus pandemic

I've mentioned this before, but revenue from #BoiseState football makes up 40-50% of the athletic department budget.

At the moment, it's only been suspended. But if it gets canceled altogether, that could me a $20M loss for the university.

This was AD Curt Apsey on July 16... pic.twitter.com/iBIzpuxziu