This is the team's first blowout since 2015 and their fourth consecutive win of the season. 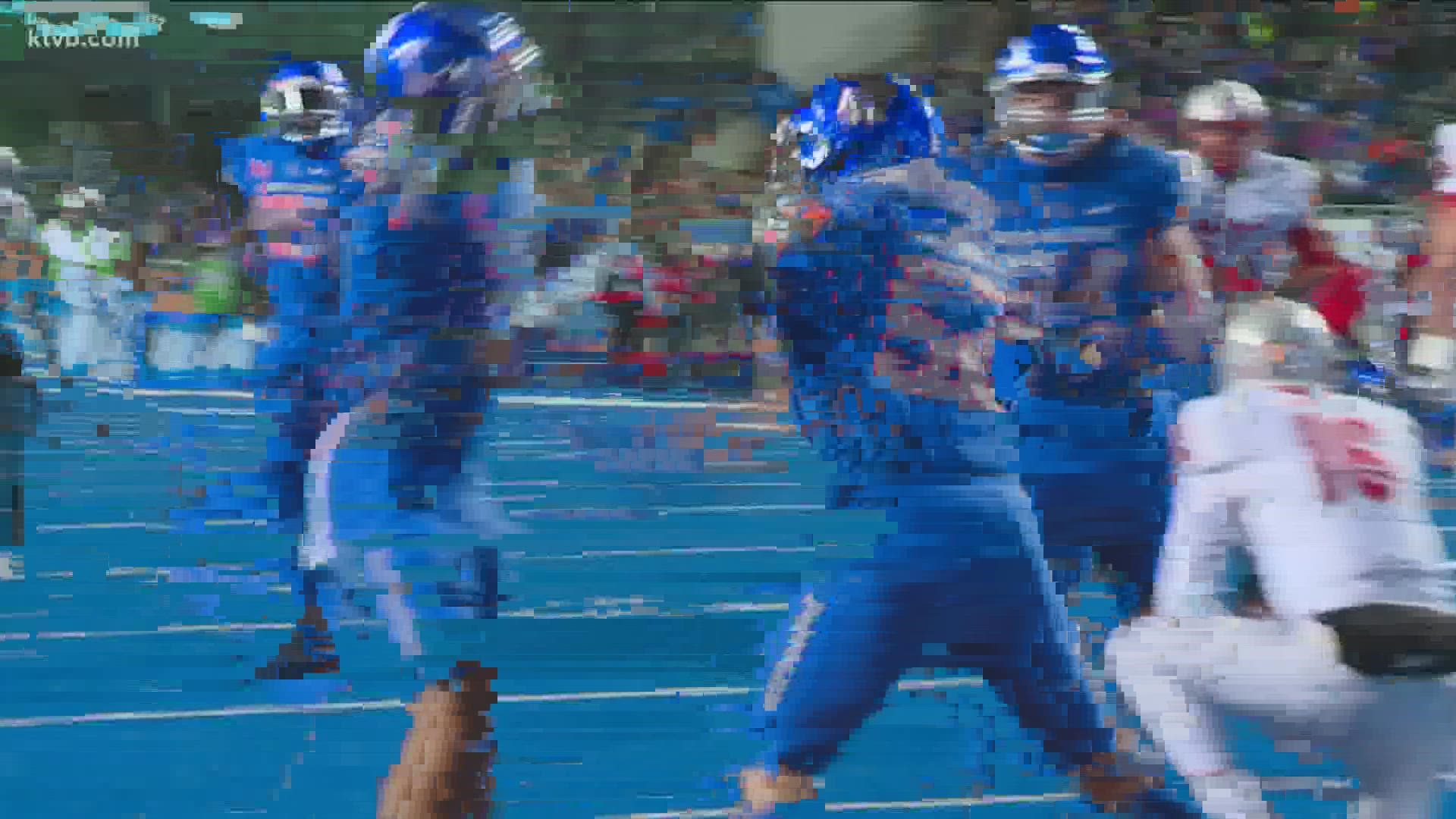 BOISE, Idaho — Senior Night on the Blue ended in a complete blowout of the New Mexico Lobos (3-8, 1-5). Boise State dominated New Mexico 37-0, playing a physical and overall impressive game. This is the team's first blowout since 2015 and their fourth consecutive win of the season.

Following the game, Boise State head coach Andy Avalos and several players will host a post-game press conference at Albertson's Stadium. Segments from the press conference will be available on KTVB.COM and the KTVB YouTube channel on Sunday,

Boise State's defense got off to a hot start just minutes into the first quarter. Safety Tyreque Jones scored the first touchdown of the game after Nickelback Kekaula Kaniho blocked a punt from New Mexico, allowing Jones to scoop and score with 12:33 left in the first quarter.

New Mexico's journey through the first quarter was a different story. The Lobos managed to get a false start, bad snap and blocked punt in their first drive.

While the Bronco's defense was able to get the team ahead early on, the offense had a hard time keeping that momentum alive. Notably, wide receiver Khalil Shakir did what Khalil Shakir does best with 8:42 left in the quarter, gaining 20 yards after a pass from quarterback Hank Bachmeier.

It wouldn't matter in the end ultimately, as the Broncos would close out the first quarter 10-0.

New Mexico had possession of the ball going into the second quarter, but once again, Boise State's defense showed up ready to play a physical game. Safety Alex Teubner blocked yet another punt from the Lobos, giving edge Dylan Herberg the perfect opportunity to pull off another scoop and score.

With 11:45 left in the second, the Broncos only had 44 yards in total, but again, the score was 17-0. New Mexico had the ball for 61% of the first quarter and only managed to run 13 plays and gain five total yards.

Boise State's offense had some trouble keeping up with the defense through the first half. Bachmeier threw his first interception to New Mexico's Donte Martin with 5:53 remaining. This was Bachmeier's first interception since Oct. 16, when he threw one on the final offensive play of the Air Force game. He tossed exactly 100 passes between those two interceptions.

Once again, Shakir did what Shakir does best for his last game on the Blue: he scored the final touchdown of the quarter after a 56-yard pass just as the clock hit 0:00. This brought the score to 24-0 going into the second half.

The Broncos did a phenomenal job keeping the Lobos off the board through the entire first half of the game. Both teams managed to get a flag on the gameplay halfway through the third quarter.

Boise State kicker Jonah Dalmas earned the Broncos a 3-point field goal about halfway through the third quarter, bringing the score to 27-0.

Dalmas scored another 3-point field goal as the third quarter came down to its final minute, bringing the score to 30-0 going into the final. Dalmas is now 25-of-27 on field-goal attempts this year. He's made 17 straight field goals, which is the longest active streak in the country.

Quarterback Jack Sears secured another touchdown for the Broncos with about 11 minutes remaining in the game. The Lobos had yet to score at this point in the game, bringing the score to 37-0.

The Broncos were quick to start early celebrations of their victory on the sidelines, as it became clear with about a minute left in the game they would claim their fourth win in a row.

37-0 was the final, as Boise State got their first shutout since their 2015 game against Hawaii.

The Broncos are set to face off against the Top 25 San Diego State Aztecs on Friday, Nov. 26 at 10 a.m. at San Diego State University. The game will be broadcast on CBS.