Watch the Broncos' post-game press conference on KTVB.COM or on KTVB's YouTube Channel. 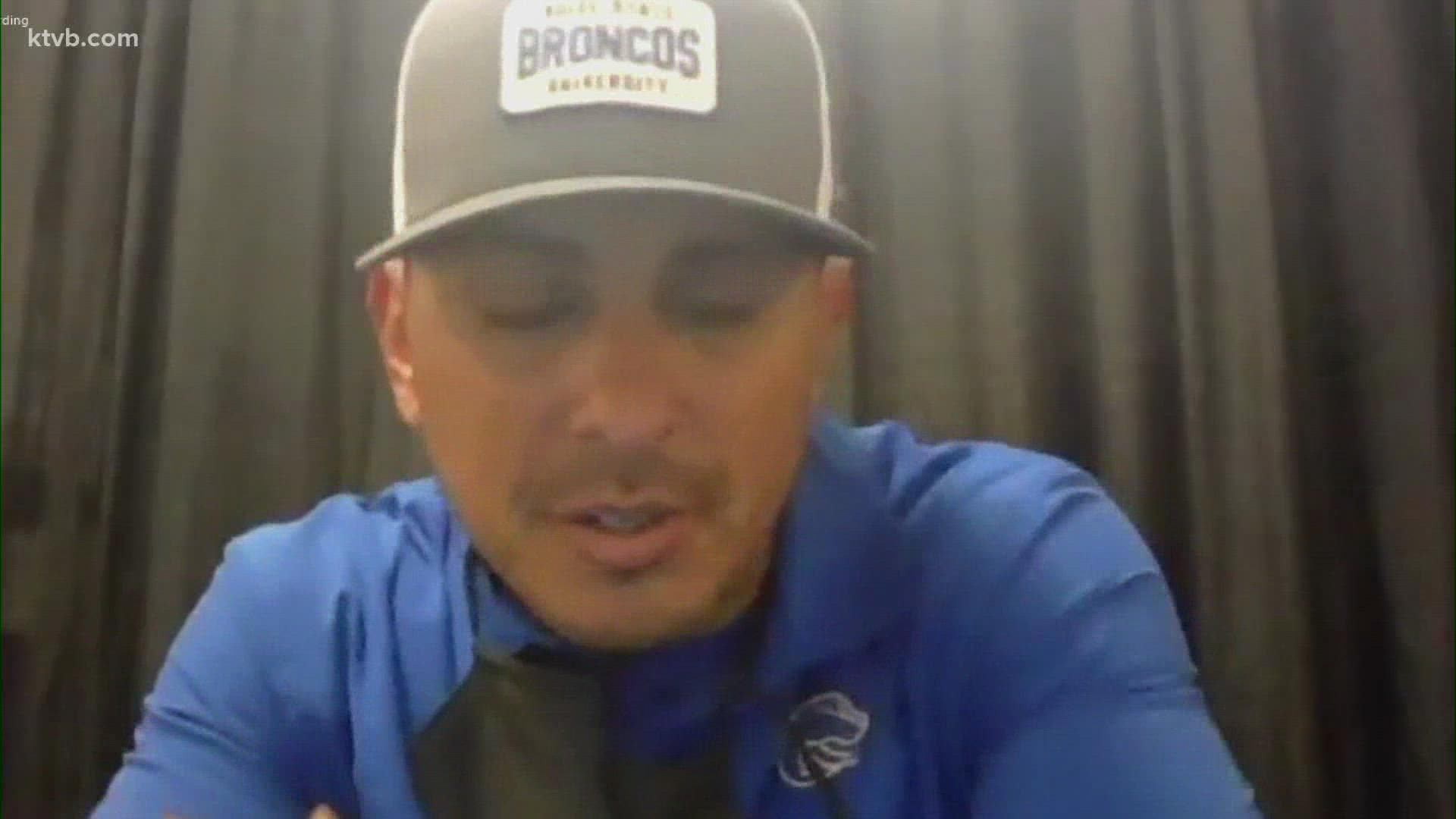 BOISE, Idaho — Has your blood pressure returned to normal? Have you wiped the tears out of your eyes? Thursday's season opener for the Boise State football team was a roller coaster for Bronco Nation. After a dominant first half, the Broncos fell apart like a house of cards but held on just enough to keep it interesting in the fourth quarter, losing 31-36 to the Knights.

With the first game of the 2021 season in the books, Boise State head coach Andy Avalos held a press conference to discuss the team's close game against UCF on Thursday night.

"It's heartbreaking that we didn't finish," Avalos said. "We didn't finish the game. But the biggest thing for us is we're excited about who we can become and where we can grow from here."

The Broncos held a 24-14 lead going into the second half but fumbled it out of the gates with an offense that seemed to have gotten lost in the Bounce House between the locker room and the field since they were nowhere to be found after halftime.

The Broncos started the season opener slow in the first quarter until cornerback Tyric Lebeauf scored the first points of the game with a 100-yard interception returned for a touchdown when the Knights were marching down the field behind the arm quarterback Dillon Gabriel.

From there, the Boise State offense found its footing, jumping out to a 21-0 lead with 12:50 left in the second quarter.

It appeared that new offensive coordinator Tim Plough was on pace for #halfahundred, but the offense could not run the ball without running back George Holani, leaving the offense to rely on Bachmeier, for better and for worse.

For Bronco Nation, wide receiver Khalil Shakir's touchdown that brought the Broncos' sizable lead to 21 would be the last offensive showcase for the Broncos in the game.

In the second half, it could have not gone much worse for Boise State. If there was a nightmare scenario for Bronco Nation, what happened in the second half was pretty close to it.

Plough said after the game that the lack of execution in the second half doomed the Broncos' offense.

Between the third and fourth quarters, the Broncos had five straight three-and-outs, giving UCF more than enough opportunities to retake the lead. In the third quarter, the Broncos had negative eight yards after racking up 134 yards in the first and 85 in the second.

Watching the Boise State offense play in the second half was like watching a train wreck happen in a loop. You know what is going to happen, you know it's not going to be good or pretty but you can't look away.

To start the fourth quarter, the Knights scored a safety on a botched punt in the Broncos' own endzone to extend their lead to 24-30. The Broncos' offense had no response.

Boise State couldn't recapture momentum until Lebeauf had a clutch interception that lined up Bachmeier and the offense at the UCF 31 yard line. Bachmeier and Shakir connected on a seven-yard touchdown pass to retake a 31-30 lead over the Knights. Whatever momentum the Broncos' had after that was soon dashed.

The Knights' offense responded with a long drive, going 75-yards to score an eight-yard rushing touchdown that would recapture a five-point lead, 31-36. UCF went for a two-point conversion but quarterback Dillon Gabriel was hit hard just before the end zone, leaving the Knights' lead at five with minutes left in the game.

Bachmeier attempted to lead the Broncos to another comeback victory in Florida. However, in heartbreaking fashion, Bachmeier threw a costly interception with two minutes left in the game when he had a chance at running for a first down and was already past the line of scrimmage.

The Broncos' offense didn't touch the ball until the final ten seconds of the game.

"He's an unbelievable competitor, " Avalos said of Bachmeier's performance. "He's a competitor, so we can learn from those situations and you can grow forward, he's going to do a really, really good job and the guys believe in him."

Oregon transfer running back Cyrus Habibi-Likio started the game but averaged a lowly 1.9 yards per carry. Andrew Van Buren didn't have any better of a night in Orlando. He ended the game with 26 yards and a touchdown on ten carries, with 22 of those yards coming from a single run.

The Broncos were limited to 49 total rushing yards against UCF.

Holani was dressed for the game and warmed up with the team but was ruled out. Coach Avalos said Holani was still dealing with injury and he didn't want to jeopardize his season.

Plough said the Broncos need the run game for the offense to operate properly.

"We all know that we need to establish the run game, we can't just drop back and throw the ball every play, so that hurt us," Plough said.

Bachmeier ended the night 25 of 39 passed for 263 yards, two passing touchdowns and an interception. Shakir had five receptions for 91 yards and two touchdowns.

"To see the guys battle through what we did tonight and fight back there at the end, we can build off of that and we can," Avalos said.

The Broncos return to the safer confines of The Blue to host UTEP on Friday, Sept. 10.