The Broncos are headed to Las Vegas on Saturday to take on the Spartans. BSU is the defending champs. San Jose State makes its first appearance in the title game. 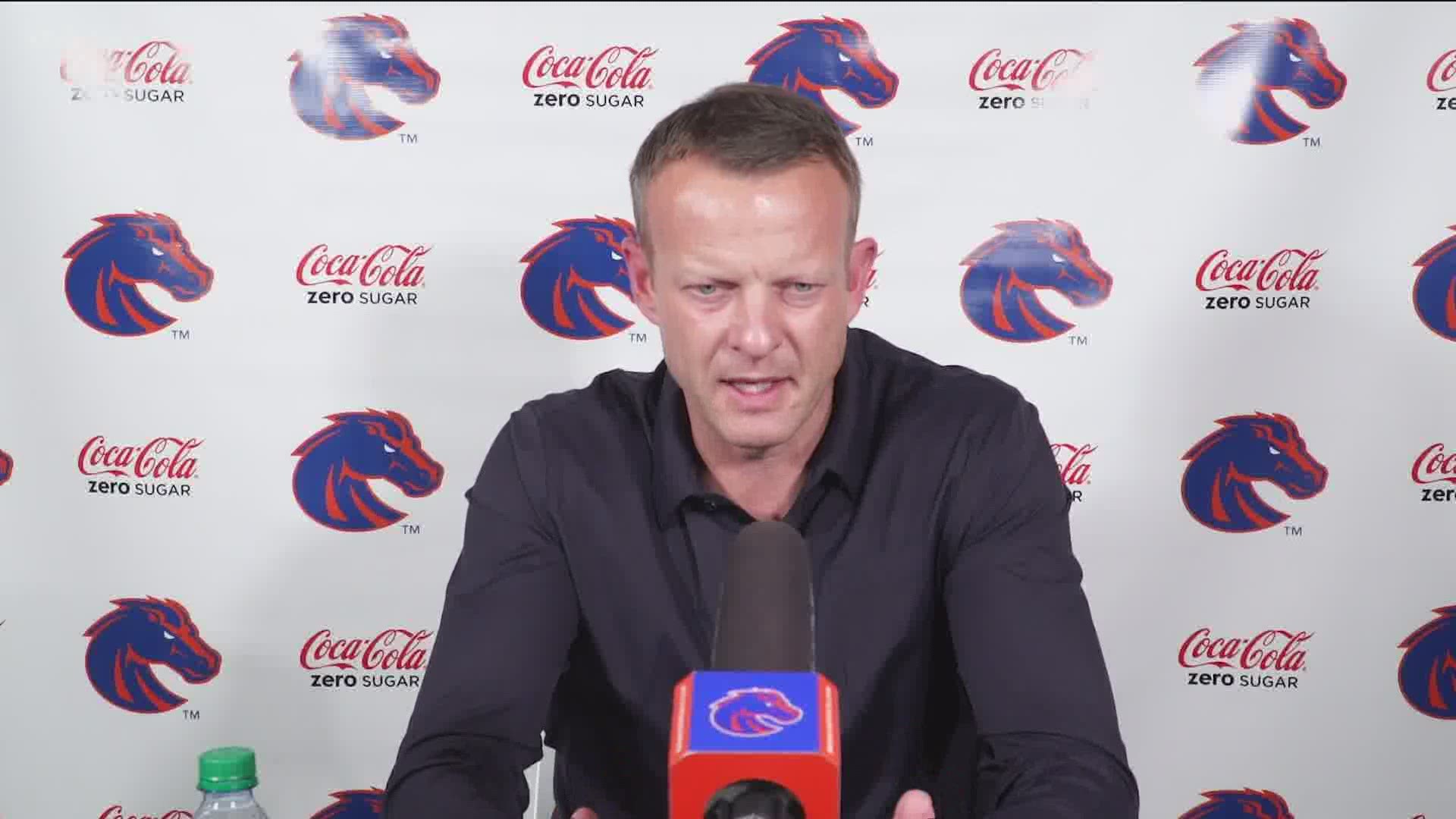 Boise State is headed back to the Mountain West championship game after beating Wyoming 17-9 in Laramie on Saturday.

The Broncos finished the regular season 5-1 and were undefeated in league play. They will get another chance to play San Jose State, which finished atop the conference at 6-0 with a comeback win against the Nevada Wolf Pack 30-20 Friday night.

The two teams were scheduled to play at Albertsons Stadium on Nov. 28, but the game was canceled due to COVID-19 protocols. The title game will be played at Sam Boyd Stadium in Las Vegas.

Head football coach Bryan Harsin answered questions about this Saturday’s title game from the media Monday. The news conference was streamed live on KTVB.COM and on our YouTube Channel.

Harsin said the Broncos have overcome a lot to get to the Mountain West Championship for the fourth year in a row.

"I know there is a lot of people that are much worse off that we are, so we're just grateful that we have a chance to play," Harsin said. "And we're excited, I think we understand the opportunity that we have to play in this championship game. 2020 is like no other year."

Boise State is coming off its best defensive performance in years. The Broncos held the Cowboys to 146 yards, the fewest allowed in true road game in 10 years. Wyoming completed just four passes.

The Broncos will be seeking to erase the memory of the last time they played at Sam Boyd Stadium when they lost to the Washington Huskies 38-7 last December in the Las Vegas Bowl. The stadium is serving as the home field for San Jose State and New Mexico due to COVID-related issues.

The Spartans come into the game ranked No. 25 in both the AP and Coaches polls.

It may have been a more difficult season for San Jose State because of extremely strict COVID-19 protocols in the Bay Area. Head coach Brent Brennan says his team has been "climbing the mountain."

"A lot of players went through the struggle with us of our first few years here are now juniors and seniors," said Brennan, "and so, those guys have been through the hard times, they know what it's like to go one and 11, and really feel like you don't have a great chance to win a game, so you know they really attacked the offseason even though it was the strangest, most unique offseason in the history of college football."

The game will be broadcast on the main Fox network. Kick off is set for 2:15 p.m. MT.

This marks the Broncos’ fourth-consecutive trip to the Mountain West Conference championship game. They won two of the last three title games are the defending champs having beaten Hawaii 31-10 on The Blue last December.

Saturday’s win over the Cowboys was also the 19th consecutive regular season conference win for coach Harsin and the Broncos.

The Arizona Bowl announced on Twitter Monday afternoon that Saturday's winner of the Mountain West championship game will play in the Arizona Bowl, which is on December 31. That game will kick off at noon and be broadcast on CBS.

It’s official! The @MountainWest Champion will be playing for a title in Tucson at the 2020 Arizona Bowl. @BroncoSportsFB and @SanJoseStateFB will battle for the bowl on Saturday in Vegas. We will see you on @CBSSports on NYE. pic.twitter.com/v5FJW1lpo7