After the Broncos' close win over the Marshall Thundering Herd, Boise State takes on Portland State at home on Saturday. 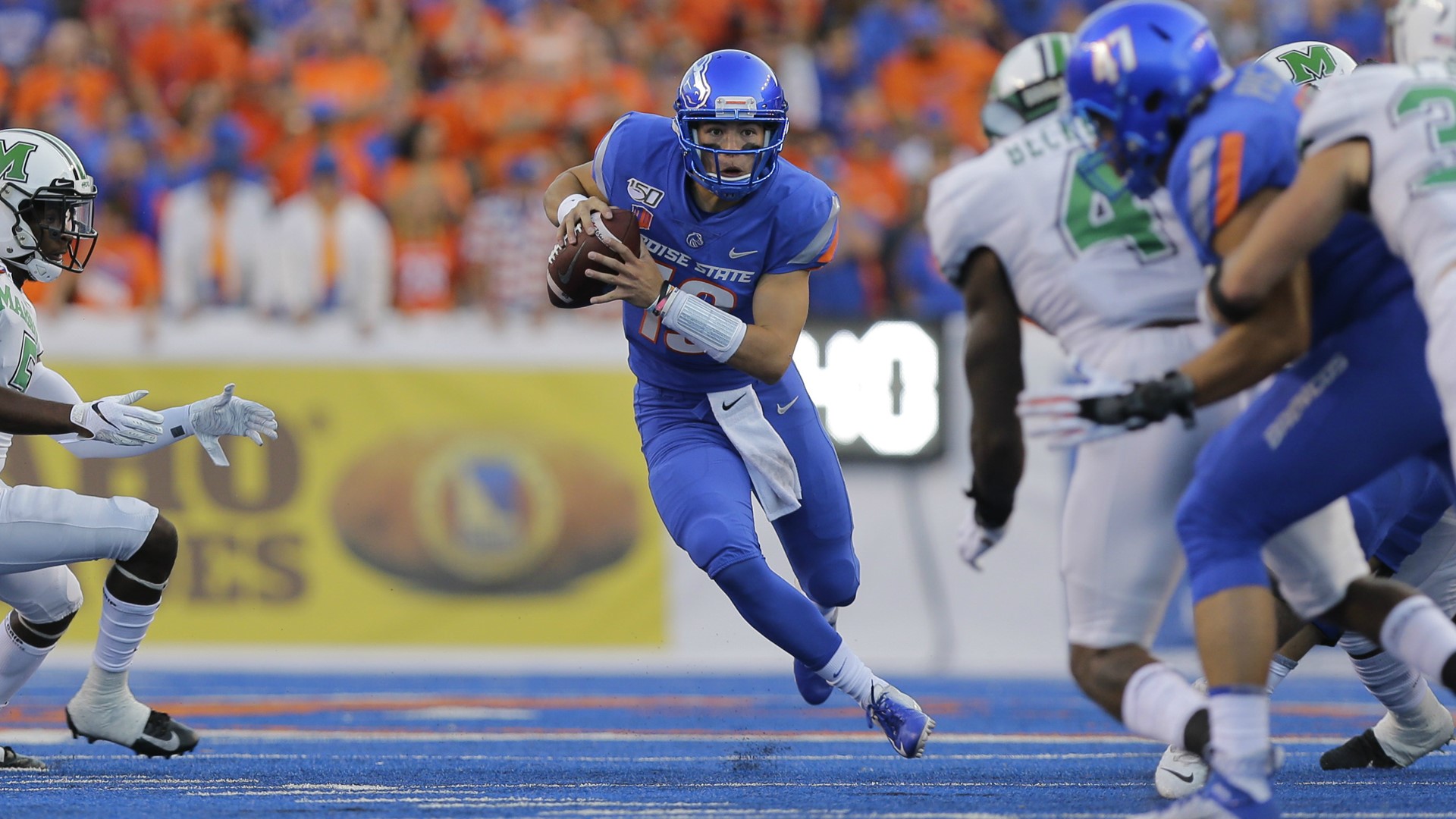 BOISE, Idaho — The Boise State football team remains at home this week as it welcomes FCS foe Portland State for a late-night tilt on the Blue.

The Saturday night matchup will be the second of three-straight home games for the Broncos (2-0), who are coming off a 14-7 win against Marshall at Albertsons Stadium last weekend. The team will open conference play next week against Air Force.

Following the win against Marshall, Boise State moved up two spots to No. 22 in both the AP Top 25 and the Amway Coaches Poll.

While the Broncos have performed well against solid competition so far this season, including posting second-half shutouts in both games, coaches are focusing on several areas of improvement on both sides of the ball, including red zone production, turnovers, and special teams play.

On defense, the team has been stellar in the second half through the first two games, posting consecutive shut-outs, and allowing just 68 combined yards. But it has allowed 38 points and 530 yards in the first half of those games. It shows the Broncos are making the right adjustments at half time.

At his weekly press conference, coach Bryan Harsin addressed the first-half defensive struggles, saying that against Portland State, the team will need to come out firing on all cylinders.

"[Portland State] played Arkansas very tough, and their offense put up a bunch of points in their last game," Harsin said. "They're gonna be able to move the ball, so on defense, we've gotta come out and start faster."

For their part, Portland State (1-1) is coming off a 70-7 drubbing of Division II team Simon Fraser. Quarterback Davis Alexander threw for 292 yards and three touchdowns as the Vikings collected a total of 646 yards on offense. Simon Fraser managed 178 yards passing but was held to a minus 65 yards rushing.

As Harsin mentioned, the Vikings played a hard-fought contest in their season-opener, falling 20-13 at Arkansas.

Portland State head coach Bruce Barnum says they know facing off against the Broncos will be a challenge.

"They're ranked for a reason," Barnum said. "Quality on both sides of the football, always running on the field, their effort is what you notice the most, always around the football. Offensively, it looks mistake-free, it's a fun team to watch."

RELATED: Boise State and BYU extend their rivalry another 10 years under new agreement

The game will be televised on ESPN2 (Mike Couzens, Kirk Morrison), which can be found on the following channels:

The game will stream live on the WatchESPN app, available in Apple and Android app stores. The service is only available to subscribers of participating cable and satellite television providers (including Cable One, Dish Network and DirecTV).

KTVB's Bronco Roundup Game Day show will be live from Albertsons Stadium before the game from 7 to 8 p.m. on KTVB, KTVB.COM, and in the Bronco Roundup app.

Join Jay Tust and Will Hall along with special guests on the Blue for a look at all of the major storylines surrounding this matchup.

All Broncos fans attending the game are encouraged to show their school spirit by wearing orange. Here's a closer look at this season's color schemes.

Credit: Boise State Football
In the Broncos' second home game, they take on the Portland State Vikings of the Big Sky Conference of the FCS. Fans should prepare for an orange out color scheme.

Harsin said during his press conference on Monday that the team is putting a major focus on ball security this week. The Broncos are among the worst in the nation when it comes to fumbles, having put the ball on the turf eight times through the first two games. Three of those fumbles resulted in turnovers.

Another focus in practice this week is red-zone production. Twelve trips inside the red zone this season have resulted in just four touchdowns.

“It’s unacceptable,” Harsin said of the 33% touchdown conversion rate in the red zone.  “Who wants to be the great team between the 20-yard lines? Not us.

"Two games tell you a lot about your team, and the red zone thing we gotta fix,” he added, noting that coaches would like to see at least 70% touchdown conversion in the red zone.

While the offense has struggled in the red zone, they have been excellent when it comes to third-down conversions.

Freshman quarterback Hank Bachmeier leads the nation on third down with 265 passing yards, 13 completions for first downs and nine pass plays of 15 or more yards. As a team, the Broncos rank 15th in the country with a 55.6 conversion percentage.

On the defensive side of the ball, Boise State is one of three FBS teams that has not allowed a second-half point this season. The other teams are Wisconsin and Navy.

"What can you say when Boise State holds Marshall to zero points, zero yards and zero first downs in the second half of the Broncos’ 14-7 victory Saturday night? Well, if you're me, you add it to the second half of the Florida State game and see what you've got.  Boise State has allowed 38 points this season in the first half and zero in the second. Total yards yielded over two games: 530 in the first half, 68 in the second. Rushing yards show as 199 to 16. Passing yards go 331 to 52. There have been 24 first downs for the opposition in the first half, and just four in the second. The defensive coaching staff, with three new faces including D-coordinator Jeff Schmedding, and a fourth coach in a new position (Spencer Danielson on the defensive line), gets major kudos."

The Broncos are 6-1 all-time against the Vikings, including wins in each of the last four meetings. The only loss was a 51-26 beatdown at home on Oct. 24, 1992. (Interesting fact: the Vikings' head coach for that game was none other than Pokey Allen, who would later lead the Broncos to a Division I-AA championship game)

The Vikings will be the first FCS team Boise State has faced since Idaho State in 2015. The Broncos last faced PSU in 2005, escaping with a 21-14 win.

Portland State is a member of the Big Sky Conference, of which Boise State was a member from 1970-95. The Broncos are 129-64-1 all-time against the league, including a mark of 13-2 since making the jump to what is now the Football Bowl Subdivision in 1996. The Broncos have won 12-straight against the Big Sky.

Following the win over Marshall, Boise State moved up two spots - to No. 22 - in both the AP Top 25 and Amway Coaches Poll. The Broncos of one of just two ranked Group of 5 teams. UCF is the other.

The Golden Knights moved up one spot in each poll and is now ranked No. 17 in the AP poll and No. 16 in the Coaches poll.

Under the College Football Playoff format, the highest-ranked Group of 5 conference champion gets an automatic bid to one of the big-money New Years Six bowl games. This year, the Group of 5's NY6 bid is for the Cotton Bowl in Arlington, TX on Dec. 28.

The Bronco Bash at the Alumni and Friends Center is is open to Broncos fans three hours prior to every home football game and closes 30 minutes prior to kickoff. The event features a family-friendly atmosphere with live music and activities for all ages.

Credit: KTVB
A map of Bronco Bash events outside Albertsons Stadium on game days this season.

Boise State's partnership with Blockparty, a fan-focused hospitality and entertainment company, continues this season with pre-game festivities at the Ford Tailgate Zone at DeChevrieux Field.

The Tailgate Zone will include a Kids Zone, complete with a climbing wall and other entertainment geared toward the younger fans. It will also include huge televisions featuring top games, food trucks, and a "tailgate village" all on the Broncos' grass practice field adjacent to Albertsons Stadium.

The tailgate party is free for fans, but if you want an upgraded experience with your own tent, TV and other amenities. VIP packages are available for purchase and cost between $400 and $2000.

Here's a chance for you to high-five your favorite players and coaches as they walk to the football center for pre-game preparations. The "Bronco Walk" will start when the team leaves the Student Union Building about two and a half hours before kickoff. The team will walk from the Student Union Building, through the Ford Tailgate Zone at DeChevrieux Field, past the Varsity Center, straight into the east stadium parking lot and ending at the Bleymaier Football Center.

The 10 to 10 Zone remains in place for home games this season. It specifies areas off-campus where people age 21 or older may consume alcoholic beverages from 10 a.m. to 10 p.m. on Boise State home football game days only.

Spaces will be available for a $10 fee in the following lots and garages: