DeChevrieux Field will be transformed into the family-friendly Ford Tailgate Zone come the Broncos' first home game on September 8. 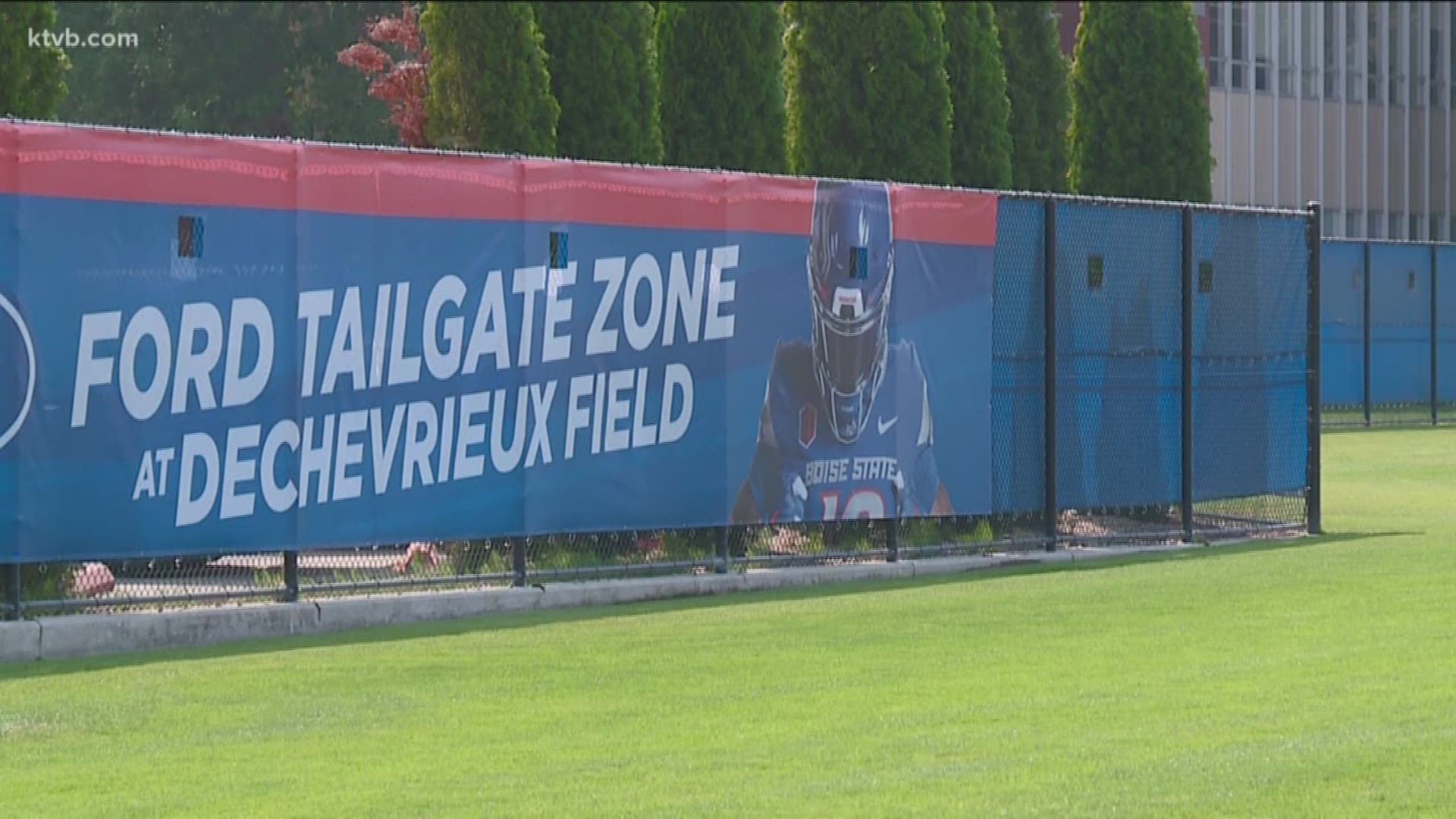 BOISE — It's about that time: kick-off on The Blue is less than three and a half weeks away, and Boise State Athletics is gearing up to make game day even better for fans.

DeChevrieux Field will be transformed into the Ford Tailgate Zone come the Broncos' first home game on September 8. The addition is a part of Boise State University's goal is to boost fans' pregame experiences.

“Collegiate football is not just the game anymore. It's the full game day experience and we want to be able to provide the best experience for our fans," BSU Assistant Athletic Director/Marketing & Promotions Matt Thomas said.

The university is trying to take tailgating up a notch and bring the experience to a whole new playing field.

"We're just really expanding what opportunities people have to enjoy the game day experience prior to heading inside Albertsons Stadium,” Thomas said. "We did it a little bit last year with some corporate hospitality set ups for some of our sponsors."

Open three hours prior to kick-off, the Ford Tailgate Zane at DeChevrieux Field is kid- and family-friendly, and private and corporate tailgate friendly. There will be large-screen TVs featuring top games across the country, along with food trucks and more amenities. Now, the famous Bronco Walk will shift from strutting down University Drive to marching through DeChevrieux Field.

"We will have some kid zone areas opportunities for some of the kids attending the football game later on in the day to meet some of our other sports teams," Thomas said. "We'll have inflatables and climbing walls and different activities for kids to enjoy right out in the main part of the field. And then private tailgates, we'll have some tents set up along the sides working with a new partner called BlockParty.

New this year, BlockParty - a full-service fan experience firm providing sports and entertainment hospitality - will build a tailgate village for fans on the Broncos' grass practice field using turnkey tailgating packages and services for groups of all sizes. Blockparty will bring easy hospitality to fans, presenting a multitude of offerings to improve fans' experience.

According to a BSU press release, offerings include bellhop services, tailgate attendants, tailgate games and FanText, which provides people with on-demand concierge service via text.

"Unless you have your own tailgate spot out in the stadium parking lot or somewhere else on campus, there's really not a generalized area for the Bronco fan to go to. This provides that space,” Thomas added. "I think a lot of collegiate institutions are following kind of that pro sports model; it's not just sports now - it's sports and entertainment."

Colleges and universities like Boise State are also trying to answer the call for less pricey tickets, with more affordable options throughout the nearly 36,400-seat stadium. Unveiled this year, BSU is now offering the Blue Collar season pass, and Thomas says they reduced season ticket prices across much of the south end zone area "in the curves" and in the north end zone general admission seating area.

"It’s a high-priced ticket and we want to make it as affordable as possible while still maintaining the level of game day atmosphere and experience our fans expect from us,” he added.

An atmosphere and experience boosted by new game day upgrades, which the university hopes will lead to a boost in ticket sales.

BSU Athletics say they are pacing nominally at this point; in looking at the numbers year over year, they are a bit ahead of what they've sold over the last couple years, which is promising.

"Based off our projections and what we budgeted for the revenue we are going to generate for season tickets and single games, we are pacing ahead of that right now. We are very excited about that. But there is always room for growth,” Thomas added.

A few years ago there was a tailgating area called The Huddle in the indoor arena next to the stadium, but that only lasted a year. BSU Athletics says the Ford Tailgate Zone is a new iteration and their answer to what The Huddle was in the past.

Alcohol consumption and the sale of alcohol are topics brought up each year before the start of school at universities across Idaho. The Idaho State Board of Education is meeting Wednesday and Thursday in Pocatello; on the agenda is allowing alcohol in designated tailgating areas during the 2018 football season.

The State Board of Education amended their policy in October 2017 to allow alcohol to be consumed with Board approval at private tailgate spaces leased to people for home games. That policy now requires universities and colleges to seek annual approval to designate specific parking lots or areas on university grounds that'll be used for tailgating where alcohol may be consumed on game day. According to the State Board of Education consent agenda for this week's meeting, Boise State University "will not sell alcohol, serve alcohol in the tailgate area, nor license or allow any vendor to sell or dispense alcohol in the tailgate area."

Boise State and Idaho State are presenting their plans on Thursday and seeking approval to designate certain areas on campus, so KTVB will follow up on any decisions made.