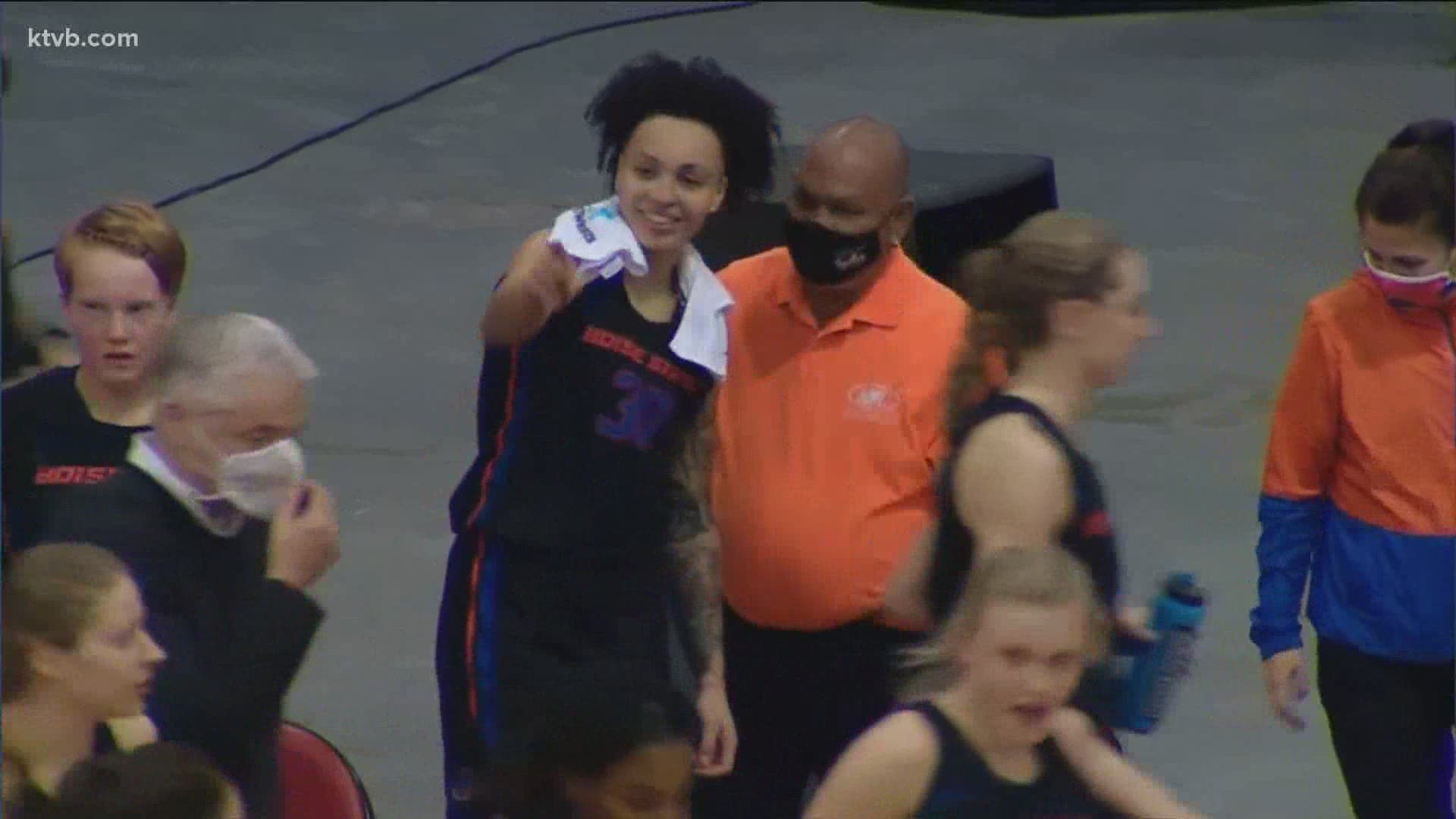 LAS VEGAS — When Boise State women's basketball standout Jade Loville arrived at the Thomas and Mack Center in Las Vegas on Wednesday, she saw all the motivation she needed sitting just a few rows up in the stands.

"We didn't know that they were going to have fans," said Loville. "I found out [Tuesday]. I let my dad know."

Loville's father, Derek, didn't think twice about the opportunity to finally see his daughter in action this season. The former NFL running back, who now lives in Arizona, jumped in his car early Wednesday morning.

Being an athlete runs in the family...

Derek played 8 seasons in the NFL and totaled up 2,535 yards and 21 TD with the #Seahawks, #49ers and #Broncos. pic.twitter.com/byjwfXH6VK

"He got here pretty quick," said Loville while laughing. "I was just so happy to see him."

Over the next two hours, Loville's father got to witness his daughter put on the greatest single-game scoring performance in the history of the Boise State women's basketball program.

Loville scored 10 of the Broncos' first 14 points. By halftime, she had 24 by herself, one point more than the entire UNLV team.

"For me, I just need to see the ball go in the net," Loville explained. "My teammates trusted me and I just wanted to knock those down for them."

Her 19 field goals made are also the 2nd most in *ANY* NCAA DI game (men's or women's) this season.#TuSTATS
(📸Boise State Athletics) pic.twitter.com/qwV4v19xWH

"There was no coaching involved in that," Presnell said, grinning ear-to-ear following the game. "When that hoop gets big, it's really fun. I was really excited for her. These were perimeter shots, too, so it was like Michael Jordan-type shots."

Following a stretch where Loville scored eight points in a span of just two minutes near the end of the third quarter, she was up to 36 points, a new personal-best and just three shy from the all-time program record.

Loville started the fourth quarter on the bench, grabbing some well-deserved rest. She re-entered the game just as the clock struck 8:20 remaining in the contest.

The 5'10" shooting guard didn't waste any time making history. Loville got a bucket in transition within her first 90 seconds on the floor, bringing her total to 38 points. She then hit a deep pull-up jumper just over a minute later and became the first player in program history to ever score 40 points in a game.

🚨BREAKING (RECORDS)🚨@JadeLoville scores a program-record 40 POINTS against the Rebels today.

With the Broncos leading by 29, Loville exited the game for the final time at the 5:38 mark in the fourth quarter. As the final minutes ticked away, the broadcast showed her smiling and pointing to her father in the stands.

"It means the world to me," said Loville. "My dad has paved the way for me. He's taught me so much. That's my mentor. To do it in front of him, I wouldn't want to do it any other way."