Boise State's Derrick Alston speaks out on Black Lives Matter and voting: 'I have to stand up for what is right'

The Broncos' star on the men's basketball team also said he's trying to get athletes Election Day off so they can have time to vote. 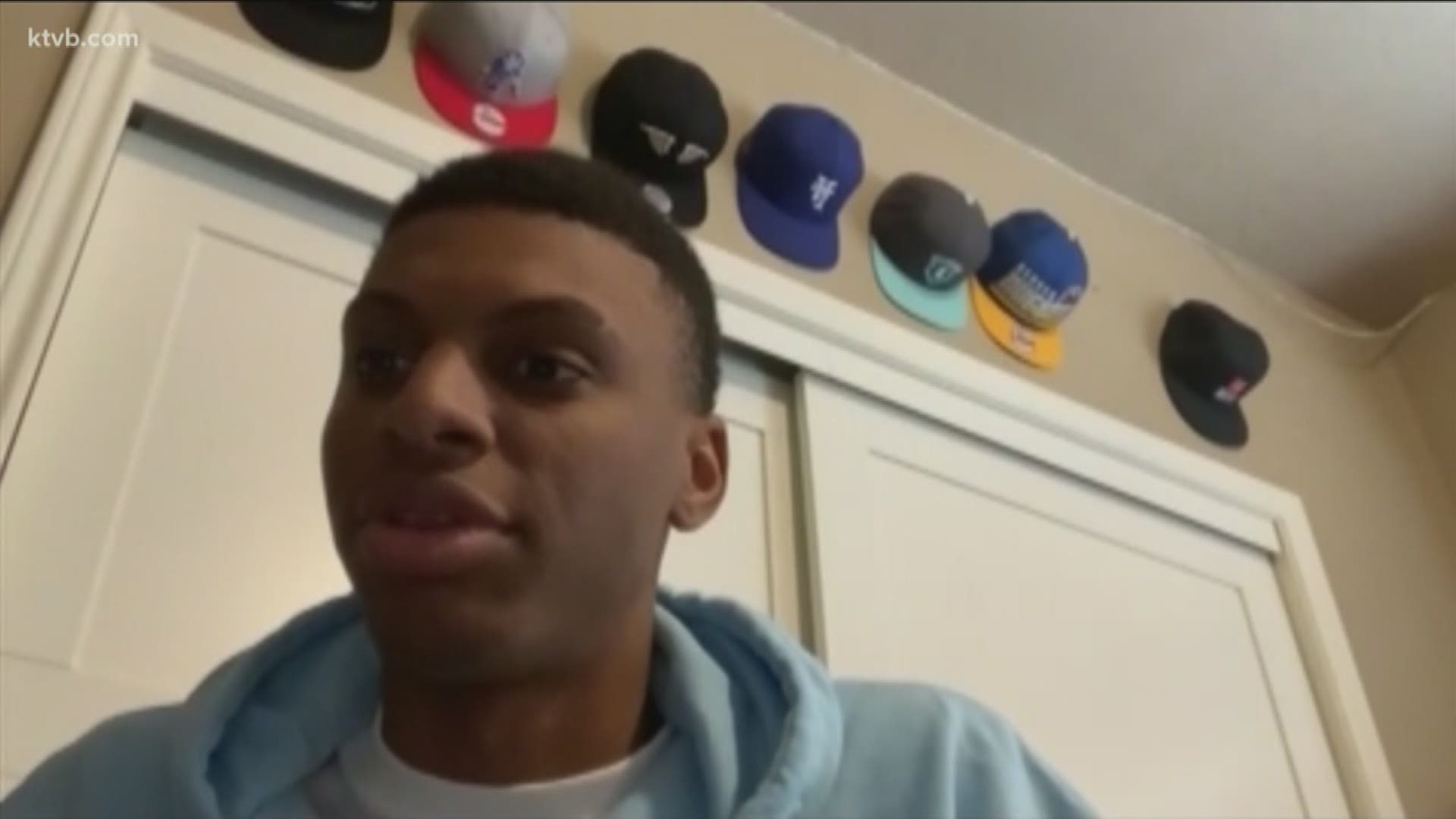 BOISE, Idaho — Over the last two years, Boise State men's basketball standout Derrick Alston has transformed himself into one of the best players in the Mountain West with a path to the NBA.

This past season he led the Broncos in scoring (17.3 PPG) and became the 31st player in program history to score 1,000 career points. Now, the senior-to-be is hoping that success will help level his platform to be a leader in the community.

Earlier this year he organized a coat drive at a Boise State game, and now, even as he weighs the idea of leaving school early for the NBA, he has hopes of using his voice to support the Black Lives Matter movement in Boise and encouraging young people and other student-athletes to go vote.

KTVB Sports Director Jay Tust recently caught up with Alston to talk about his improvements on the court, and the potential impact he plans to make off of it.

Jay Tust: So Derrick, it's been a little while since we caught up with you. Can you give us a little update on how your basketball journey is going?

Derrick Alston: With all this stuff going on, everything's kind of a push back. (I'm) thankful for things kind of opening up more now so I'm able to get back in the gym on a regular basis and be able to train again. (I want) to be ready if there ends up being workouts (with NBA teams) or anything like that. I've been able to interview with about over half the league now. I've been getting a lot of good feedback. I don't have to make a decision until August 3, so I want to continue to get all the information that I can and then, hopefully, just make the right decision for me.

Tust: What have those meetings been like? Have you been able to work out for anybody so far?

Alston: No. They've basically just been like all Zoom calls. So I think I've been able to showcase myself very well. Just, you know, kind of conveying the confident side of it as well as, you know, also being humble knowing how much more I can develop.

Tust: Derek, anybody that follows you on social media, they know that you have a heavy heart right now. As you prepare for the NBA draft and weigh whether or not you're going to come back to college, how hard is it to focus solely on basketball right now?

Alston: Yeah, it's hard for sure. I mean, you think about a state of the world right now. You know obviously we're still in the middle of a pandemic, but what I know is that I can just control what I can control, and just trying as a black man and as a member of this community, to be able to just use my voice to promote positivity and love.

Tust: What is the right way to promote that, Derek?

Alston: You know, I think the biggest thing that I've kind of learned through all this is that, if you want to speak on issues like this you've got to do it in your own voice or own volume. What I've been trying to promote through my social media, which I was going to probably post tomorrow, is a voting petition. Usually, on November 3, I either have a game or something like that. Like I've said on my social media on the importance of voting, I think it's always been important, but I think that really needs to be stressed. I mean, if looking back at the past two elections, you know, in my age group from 18 to 24, the percentages from both those election years were drastically different. I think that you know, people might need to take voting a lot more seriously and if we do want to see change. I think that's the first place that we got to go.

Tust: Derek, I saw that you got the chance to go down and participate in the vigil here in Boise. What was your takeaway from that evening?

Alston: That was a very powerful moment for me. I've never been to something like that. All races - black, white - everybody was there. It was just a powerful moment, just to be able to hear those names that have been affected to my police brutality. Being able to go to that vigil and being able to be around people and just be a part of the Black Lives Matter movement here in Boise, it was definitely a powerful moment for myself. As a black man and be able to want to be a part of that and want to be a force of change here in this community.

Tust: How do you connect yourself here locally? What do you want to see here in Boise?

Alston: I guess it's more of that connection piece. Being an athlete, I think people obviously know who I am from an athletic standpoint. But I don't want that just to be my only side. LeBron (James) always talks about it and it just brings more than an athlete. I think that for me to kind of connect myself to that kind of situation, I feel like it is not enough for me just to be an athlete or just a kind person. I have to stand up for what is right and be forced for this movement and try to use my voice and my platform to promote the right things.

RELATED: 'Love is the greatest tool that we have': Boise State football team chaplain on finding love and hope