Here's what we could've learned during Texas spring football

Normally, spring football would be underway. Instead, Longhorn fans are left with a lot of questions. 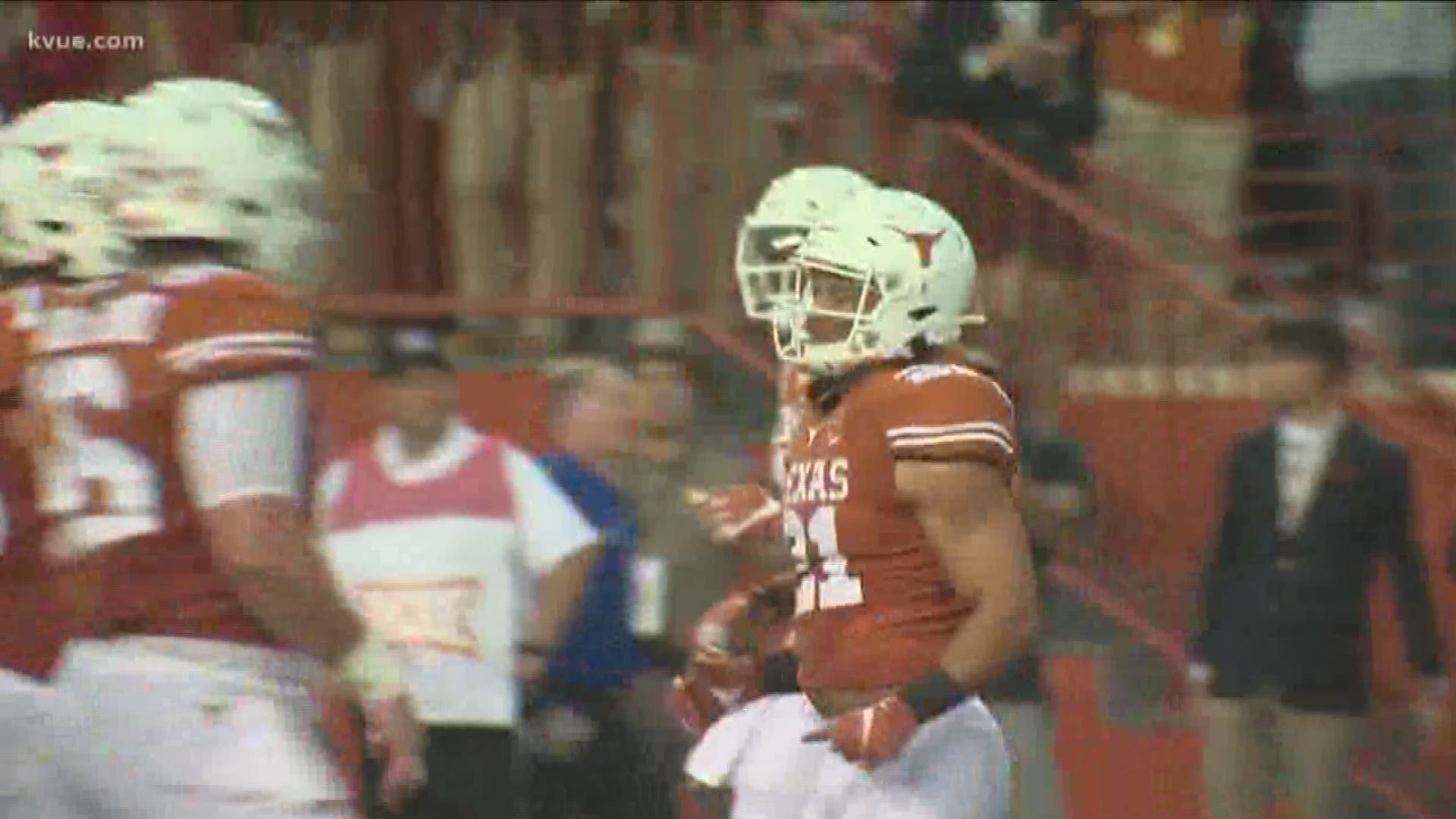 AUSTIN, Texas — There's no spring football this year due to COVID-19, which means college football fans all over the country will have more questions than usual entering the fall.

For the past two weeks, the KVUE Sports team has been breaking down the 10 most important Texas Football questions that could have been answered during spring ball.

10. Who will be Ehlinger's backup?

Spring football would have shown Longhorn fans just how close the competition is for the backup quarterback position. Sam Ehlinger will be the starter this season, but who's his top understudy?

Lake Travis grad Hudson Card enrolled early at UT Austin so he could learn the system and compete with redshirt sophomore Casey Thompson. Thompson was Ehlinger's back-up last season, so he has the edge in experience – but Card likely has the edge in raw talent.

9. Who will be the starting linebackers?

The KVUE Sports team expects to see returning-starter Ayodele Adeoye back in the starting lineup, but the linebackers who will join him on the first-team remain a mystery.

Juwan Mitchell started five games last season but nearly transferred in February. The spring would have given him an opportunity to show how dedicated he is to earning even more starts this season.

DaMarvion Overshown was an elite high school recruit in 2018. Overshown switched positions from safety to linebacker this offseason. The spring would have given him a chance to grow comfortable playing closer to the line of scrimmage.

In an interview with Horns 247, Tom Herman admitted the Longhorns remain in the market for a grad transfer linebacker – meaning one of the team's starters might not even be on the roster yet.

8. Are the receivers ready to be stars?

Brennan Eagles and Jake Smith are the Longhorns' top two returning receivers. Each showed flashes of amazing potential in 2019 – Eagles with a two-touchdown performance in the season opener, and Smith with a two-touchdown day against Rice. The talent is there, but the consistency isn't.

A spring filled with first-team reps and practices against one of the most skilled secondaries in the nation could have shown us if Eagles and Smith are ready to pick up where Devin Duvernay and Collin Johnson left off.

Two key members of the offensive line are now gone, and one of them, Zach Shackelford, was a team captain. Not only do the Longhorns have to replace that talent and starting experience, but they must replace Shackelford's leadership as well.

We could have seen who would step up and take those two vacant starting jobs, had there been a spring football season.

Former defensive coordinator Todd Orlando is out and former Rutgers head coach Chris Ash is in. Ash brings with him a new defensive scheme that features a four-man front – which the team hopes will help them pressure the quarterback more consistently.

We've heard about position changes and how this new defense should look, but spring ball was our opportunity to see it firsthand. Now, we'll just have to wait until the fall to get our first look.

Sam Cosmi has the frame and talent to be an elite left tackle – one who is known all across the nation, not just all across the Big 12. But is 2020 the season when he will prove it?

The junior from Humble, Texas, has started over 25 games and picked up conference honors, but if he makes the jump from All-Big 12 to All-American, it would be huge for the Longhorns' offense and could send Cosmi flying up 2021 NFL Draft boards.

The spring would not have told us if Cosmi would have an All-American season, but it would have provided a great opportunity to see him lead a rebuilt offensive line and solidify himself as the best tackle in the conference.

4. Just how good are the junior DBs?

Just two years ago, Longhorns fans were "over the moon" about signing one of the best defensive back classes in history – now it's time to see that talent pay off big on the field.

Caden Sterns, BJ Foster, Jalen Green and Anthony Cook were all top 65 recruits in the nation coming out of high school. Add Demarvion Overshown, who recently changed positions from safety to linebacker, and D'Shawn Jamison, who was a top 115 recruit in his own right, and you have a collection of athletic players with elite talent, who now also have experience.

On paper, the defensive backs should be a strength of this year's team and one of the best secondaries in the nation. Watching these players go through the spring together – against a quarterback who is already a household name – could have shown us if these players are ready to consistently live-up to their status coming out of high school.

3. How will Whittington adjust?

After being one of the top recruits in the nation in 2019, running back Jordan Whittington missed almost all of his freshman season due to injury. Tom Herman told KVUE the former five-star will line up at slot receiver, instead of running back, going forward.

2. How will Ossai's position change go?

In 2019, fans could argue sophomore linebacker Joseph Ossai was the longhorns' best defensive player, but when new defensive coordinator Chris Ash joined the staff one of the first things he did was switch Ossai's position from linebacker to a hybrid LB/DE.

This means the player who led the team in tackles, sacks, and forced fumbles a year ago will have less pass coverage responsibility and will focus – almost exclusively – on rushing the quarterback.

On paper, this looks like a position change that could produce instant results and make the Texas pass-rush one of the best in the Big 12, but we will not have a chance to see how natural Ossai looks in this new position, until fall camp begins.

1. Is the Ehlinger-Yurcich combination as dangerous as it sounds?

Sam Ehlinger is talented, driven and a great leader. He would find success in almost any offensive system. But new coordinator Mike Yurcich doesn't just bring '"any system" – he brings a one that has produced amazing, sometimes record-setting, numbers everywhere he has coached.

The Longhorns' new offensive guru will not have to improve Ehlinger's numbers much to elevate him to one of the nation's elite. The Texas QB passed for and rushed for more yards than Ohio State's Justin Fields did last season – and Fields earned a spot as a Heisman finalist, under Yurchich's guidance.

An early-season showdown at LSU will show us how dangerous this QB-coach combination really is, but it would have been nice to see how they moved the ball against the Texas defense in spring football.