Less than two days after announcing Kasey Kahne would not return to the No. 5 Chevrolet in 2018, Hendrick Motorsports made it known that William Byron will make the move to the Monster Energy NASCAR Cup Series next year. 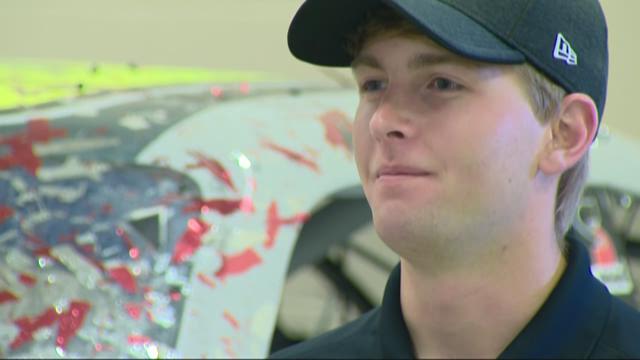 Less than two days after announcing Kasey Kahne would not return to the No. 5 Chevrolet in 2018, Hendrick Motorsports made it known that William Byron will make the move to the Monster Energy NASCAR Cup Series next year.

Byron, who has 10 combined wins in the NASCAR Camping World Truck and NASCAR Xfinity Series over the last two seasons, will compete for Rookie of the Year honors with sponsorship from Axalta and Liberty University.

Welcome to the team! @WilliamByron to make Cup debut for Hendrick Motorsports in 2018.

“It hasn’t sunk in yet,” said Byron. “Mr. (Rick) Hendrick has built such a great team. The people at Hendrick Motorsports have dedicated their lives to giving their drivers the best chance to win every weekend. I have a responsibility to them to work hard and put everything I have into this opportunity. They need to know I’m always giving 100 percent because that’s what they do.”

Byron is currently competing in his first full season in the NASCAR Xfinity Series with JR Motorsports. He has a series-leading three wins among Xfinity Series regulars, including victories at Daytona and Indianapolis. He ranks second in the points after 20 races and remains a championship favorite.

“At every step, William has proven how quickly he can adapt,” said Rick Hendrick. “Some drivers have raw talent and some have a strong work ethic. William has both. It’s impressive to see a young guy who never gets rattled and instinctively knows how to communicate with his team. That level of commitment, poise and pure ability is rare at any age. I think he’s just scratching the surface.”

Byron had the most successful rookie season in Camping World Truck Series history in 2016 by posting a rookie record seven wins. The 19-year-old driver is a graduate of Charlotte Country Day School. Byron's career has been on the fast track since making his racing debut in 2013 by competing in the U.S. Legend Car Young Lions division.