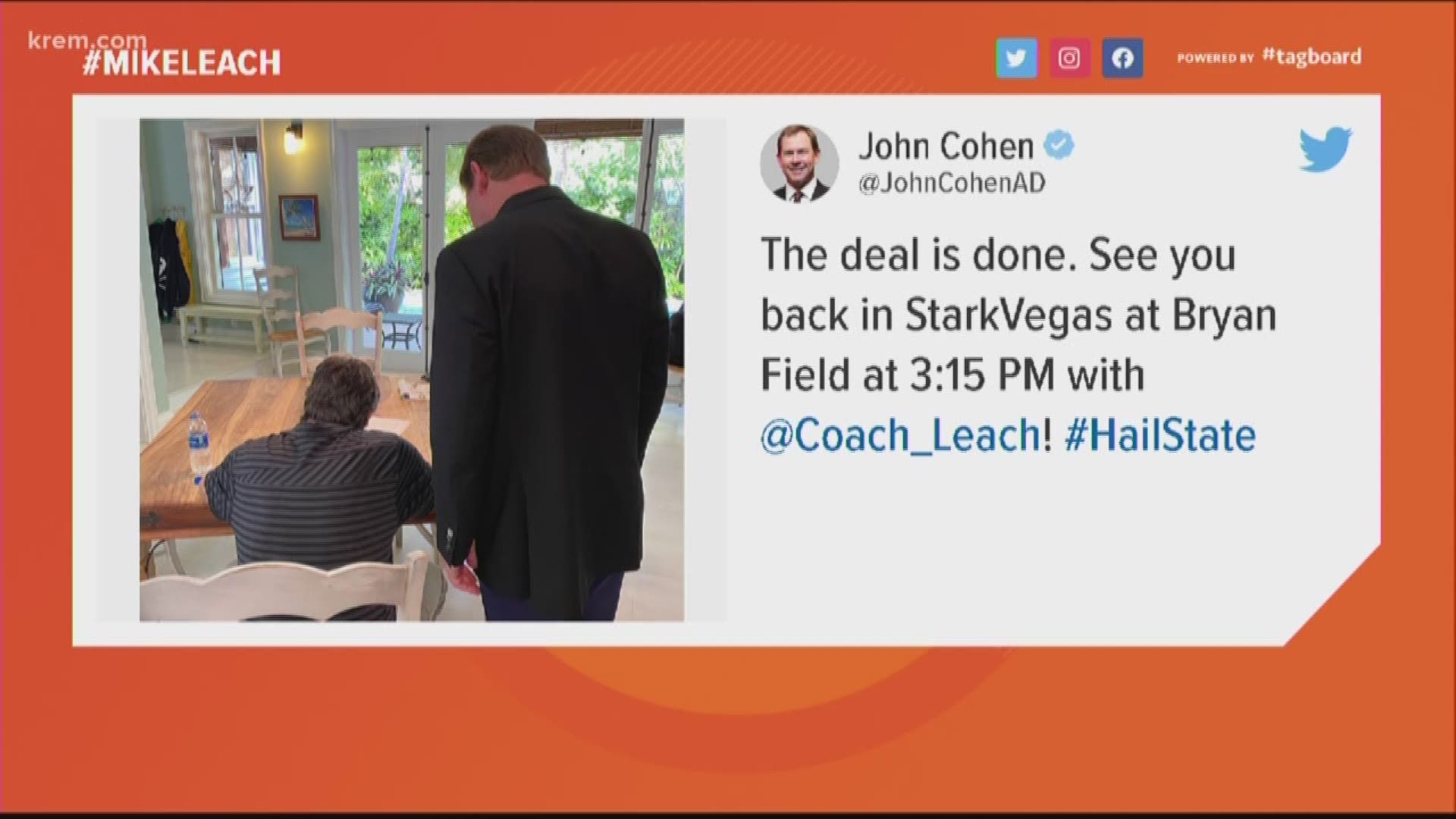 Mississippi State Athletic Director John Cohen said Leach has signed a deal to take over as head coach of the school's football team.

Cohen tweeted photos of Leach singing the deal, writing, "The deal is done. See you in StarkVegas at Bryan Field at 3:15 PM with Coach Leach."

Leach has already changed his Twitter bio and cover photo to reflect his new job.

"I can't tell you how excited I am to be the head football coach of the Mississippi State Bulldogs," Leach is quoted as saying in a press release.

"I loved Washington State, but I am excited for the next chapter in the SEC. It's a privilege to be a part of the MSU family, and we look forward to getting down to Starkville shortly," he added.

The news of Leach's departure is the No. 1 trending topic on Twitter in the United States.

"Mike has transformed Washington State football into a national brand and we will forever be grateful. We wish he and Sharon nothing but the best in their chapter at Mississippi State," the statement reads. "Now we look forward to elevating the Cougs to the highest levels of college football."

Leach has coached for 18 years at Texas Tech and Washington State University.

Leach has been linked to three SEC jobs this season.

The most serious contender so far was Arkansas, who opted to hire Sam Pittman. FootballScoop.com reported that Leach had met with the school.

Leach was also linked to the Ole Miss job, but nothing came of that other than a fake tweet announcing Leach’s hiring. The school ultimately hired Lane Kiffin.

Leach’s contract was rolled over for another year at WSU this past season, but that was an automatic rollover. Leach did not sign anything new to receive an extra year on his coaching job. The new contract extended through the 2024 season.

Plenty of coaches leave schools though while being under contract.

Mississippi State fired their former head coach Joe Moorhead on Friday, Jan. 3 after Mississippi State lost to Louisville 38-28 in the Music City Bowl. The Bulldogs finished the season with a 6-7 record.

Moorhead was the team’s head coach for two seasons and had won 14 games over those two years.

One of the major keys of his firing was that Moorhead’s presumed starting freshman quarterback Garrett Shrader could not play in the bowl game after getting into a fight with a teammate before the bowl. He suffered a facial injury from the fight that prevented him from playing.

Ten players were also suspended for eight games during Moorhead’s tenure after a tutor took tests for players online. The player who injured Shrader was one of the players suspended in the academic scandal, according to media reports.

There have been multiple other coaches linked to the Mississippi State job, including former UW head coach Steve Sarkisian. Sarkisian seems to be the leader for the job according to numerous outlets.

RELATED: History, winning record on the line as WSU prepares for Cheez-It Bowl