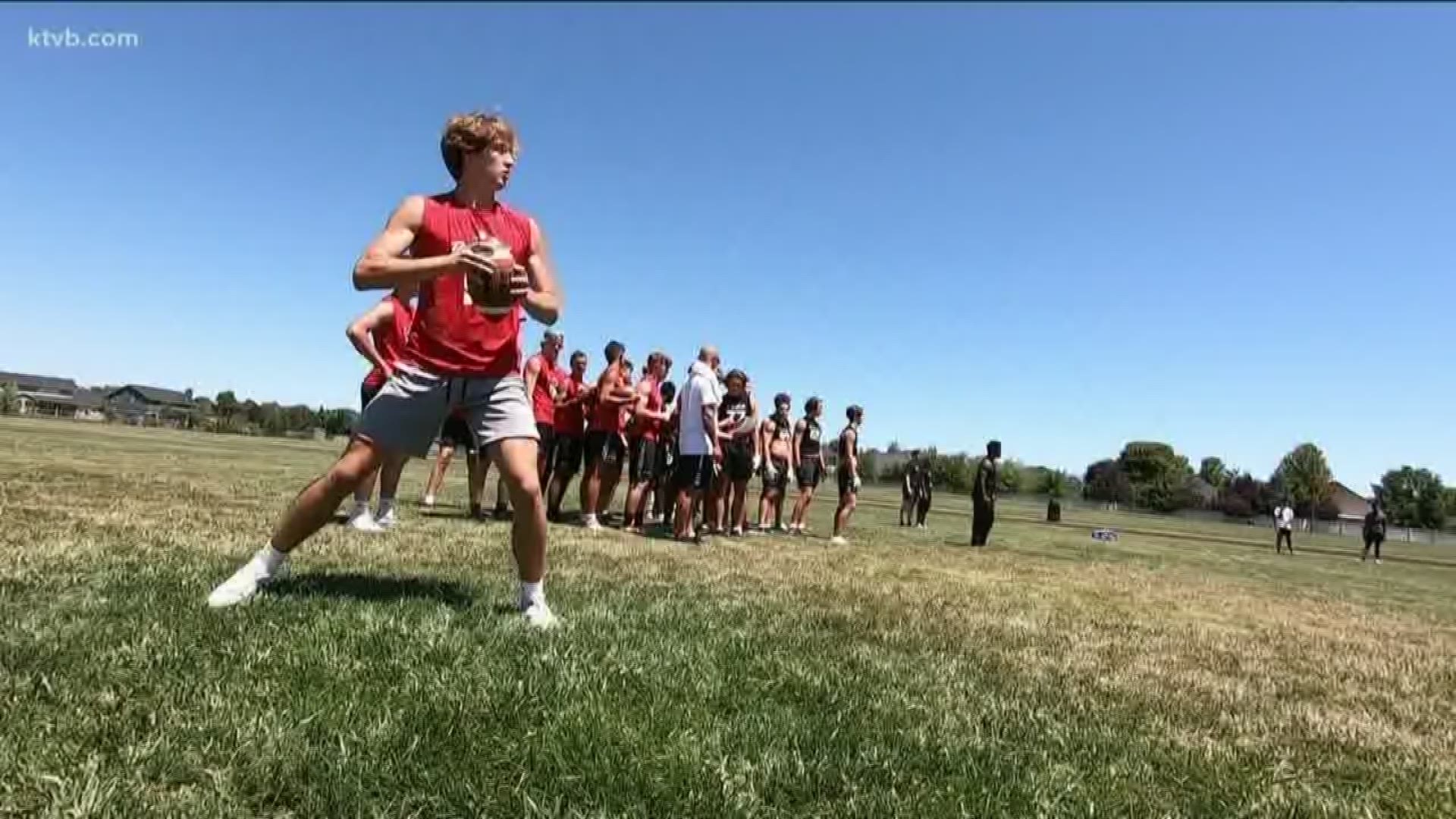 BOISE, Idaho — The fourth annual RARE Showcase was held over the weekend in the Treasure Valley. The football skills showcase was led by Boise State alum and local high school football coach Juss Jackson, who has put on the event for the last four years.

This year's showcase was crucial for some prep football players because of the exposure the camp provides. The NCAA is currently in a recruiting dead period through at least August 31, which severely limits the opportunities that high school football players normally have each summer to attend camps, visit campuses and interact with college coaches to find opportunities at the next level.

During the dead period, college coaches also can’t scout, travel or watch/put on football camps. This year’s RARE Showcase was filmed so players can send their videos to surrounding college football programs who weren't able to do any in-person scouting this year due to the COVID-19 pandemic.

Great to be around 🏈 today! Nearly 100 of the top prep footballers from around the state competing today in the 4th annual @RareShowcase, including @Kuna_Football QB and Montana State commit @sean4austin #KTVBhss pic.twitter.com/Er9lxph5xF

Jackson says while RARE stands for respect, ambition, responsibility and effort, it also stands for the local talent at the camp.

"We get kids from all over Idaho, bring them all to one central location, kind of the guys of Idaho that are really looking to go play college ball," Jackson said, "and they get to come out and showcase their skills."

"Because it's a rare group of kids, Idaho kids," Jackson added. "Nobody really pays attention to the rare group of Idaho kids and there's talent here. From the quarterbacks to the lineman, to the receivers, defensive backs, running backs, everything you see here, it's a great group of kids. I think there's some hidden talent here and I think this is going to be a way for us to help and get those kids out there where people are like, 'Oh yeah, they got some good talent in Idaho.'"

With the NCAA currently in a recruiting dead period through at least August 31, the exposure this camp provides the kids is invaluable and Jackson does what he can to showcase their talent.

"It's a trust thing and my job is to make sure no matter what, they can trust me as being an outlet, and being a guy that's going to help them out," Jackson said. "I'm not doing anything to make it seem like I'm promising them division one scholarships and things like that, but they can trust me that I'm going to help."

Multiple players at the camp spoke with KTVB about the camp means to them.

"They've got to find out about you some way or another. This camp gives you a good opportunity for [coaches] to find out," Rocky Mountain senior Kobe Warr said.

"Can't even put into words how important this camp is, especially with COVID this year," Lakeland High School senior tight end Ammon Munyer said. "College coaches can't come and see us in person, unlike when they normally would be able to, so the video we have of our film here that we can send out is a great opportunity."

Loveland already has offers from Idaho State University, Nevada, and Utah State, according to 247Sports.

"When college coaches are asking and looking at this stuff, I'm definitely trying to get out here as much as I can," Loveland added.

Thanks to the camp, players from across the Gem State are now getting some help getting seen by colleges while the coronavirus pandemic continues to impact the sports world.

"It's a blessing really," Munyer said. "I think North Idaho is tucked away in Idaho and to come down here and show what we can do, it's a blessing."

The fees for the annual event put on by Jackson is also donated to 4TheAbility, which pairs children with special needs with varsity athletic programs

"Football is a big one for us, we take these kids and they get the opportunity to be apart of a team," Jackson explained. "4TheAbility is really good for the special needs community and I think bringing that and football together is huge."

RELATED: Rocky Mountain soccer player on winning Gatorade Player of the Year and her scholarship to Gonzaga

RELATED: Rocky Mountain product reflects back on being drafted to the MLB