They snuck into the 5A state playoffs last year. Are the Meridian Warriors the dark horse of the 2019 5A Southern Idaho Conference?

After squeaking into the 5A state playoffs last season with a 3-6 record, the Warriors are poised for a breakout season, with six all-conference players returning. 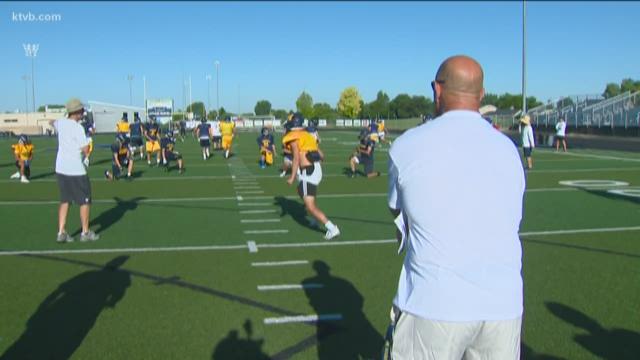 MERIDIAN, Idaho — The Meridian Warriors have been in the middle of the 5A Southern Idaho Conference since 2013.

Last season, they somehow managed to sneak into the 5A state playoffs with a 3-6 record, ultimately falling to Madison in the first round.

But with a new coach, ten returning starters on the offensive line and six all-conference players back this season, the Warriors believe they have what it takes to be a top contender in the 5A SIC.

"It's exciting," Zamberlin said. "I really enjoy the kids."

One of those kids is senior offensive lineman Tyler Barron, who says he is optimistic about where this year's squad is headed.

"I think we can be all-state, all of us," Barron said. "The physicality up front is kind of unbeatable. I think that we have the [meanest] o-line in the state."

Returning at quarterback for the Warriors is senior Braden Honn, who says this season, he's more confident than ever.

"It will definitely help this season, just having that experience," Honn said.

The Warriors will need a little help on the defensive side of the ball after losing first-team all-conference defensive back Javen Woodall to graduation.