The Nampa Bulldogs and the Columbia Wildcats battle it out for a spot in the 4A state playoffs. 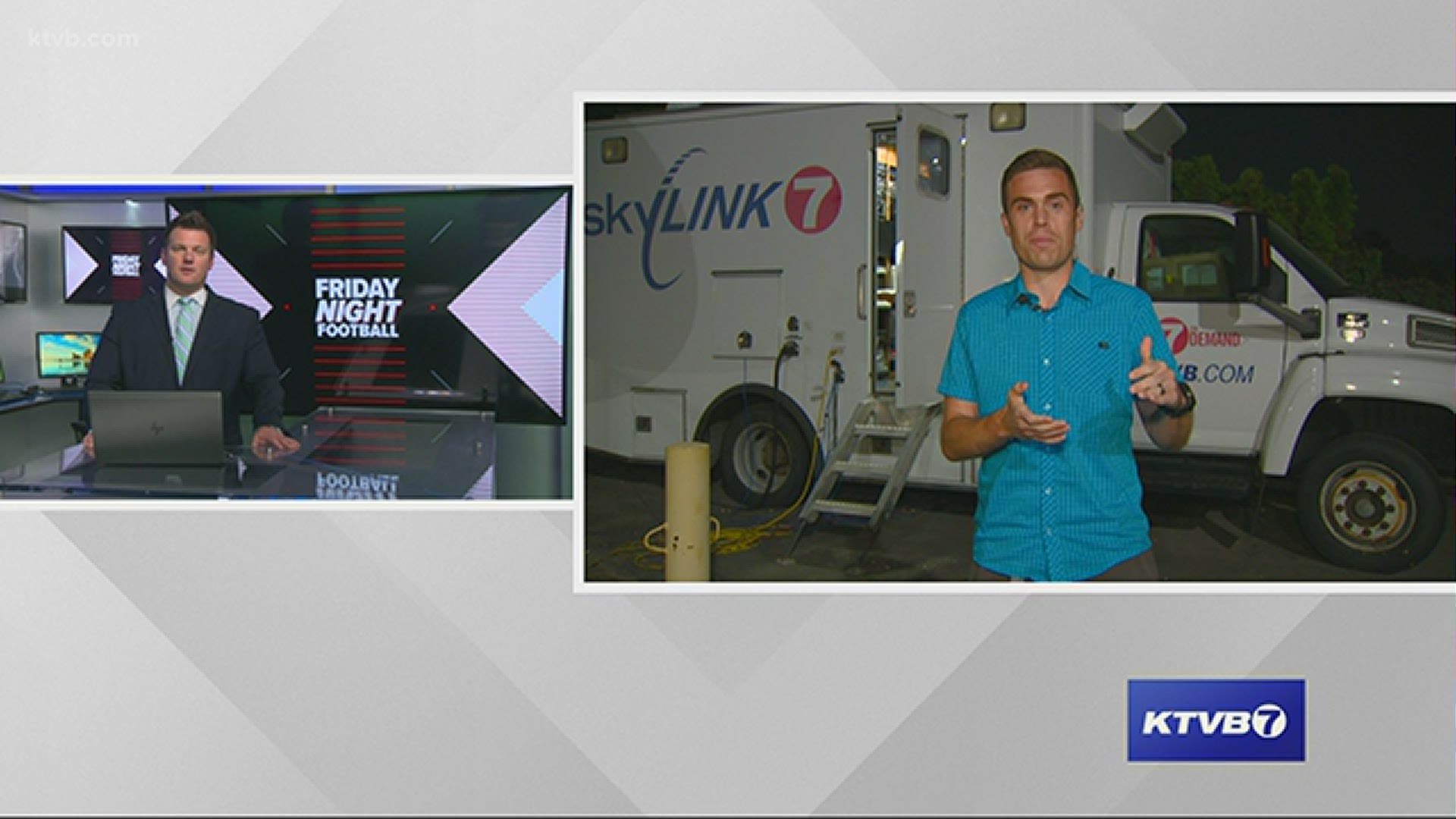 BOISE, Idaho — In the final two weeks of what has been an irregular regular season, teams across the Treasure Valley dueled it out for key playoff seating in the 4A and 5A state playoffs.

At 10:40 p.m. Friday, KTVB's Jay Tust and Will Hall recapped some of the scores and highlights from games in Southern Idaho on Friday Night Football on YouTube.

Find KTVB's live blog of updates of games around Southern Idaho below the live stream.

In week seven, the playoffs are in sight and teams like the Emmett Huskies, Eagle Mustangs and Nampa Bulldogs battled it out to grab onto an elusive playoff berth in the final weeks of the regular season.

RELATED: 'They did not ask for this': High school football game forced to end at half after Ammon Bundy refused to wear a mask or leave

The Bishop Kelly Knights were scheduled to take on 4A SIC foe Caldwell on Friday night, but the game was canceled earlier this week.

According to KTVB's media partners at the Idaho Press, the Caldwell Cougars had to forfeit the game after 33 of the 58 students on the roster were ineligible. Athletic Director Jon Hallock said it was mostly due to academic issues.

On Sept. 28, students with failing grades were warned that they had to turn their grades around or they'd be ineligible to play. On Monday when grades were checked, many of the students on the team were still failing classes.

It was a huge win under first-year coach Mike Altieri. It was Boise's first victory since a 34-29 decision Oct. 12, 2018, over Timberline.

The teams combined for 54 points in the first half before the visiting Rams (6-1) stopped the Hawks (2-2) in a nonleague game.

Skyview led three times in the first half, but a 46-yard field goal by Ian Hershey as time expired allowed Highland to take a 31-23 lead into halftime.

Ty Friceky had three catches for 139 yards and three touchdowns for Nampa.

Carter Menchaca had 64 yards rushing to go with 67 yards passing for Ridgevue.

The Falcons controlled from the outside, taking a 21-0 lead into halftime.

The Huskies fell behind early but rallied to knock off Middleton 50-27 in a key 4A Southern Idaho Conference game.

The victory means a four-way logjam continues atop the SIC. Emmett (5-2 overall) is at 4-1 along with Bishop Kelly, Nampa and Vallivue.

Willy Shirts was a workhorse, rushing for 177 yards on 26 carries and scoring two touchdowns.

Melba hosts Nampa Christian on Friday with an opportunity to capture its first conference championship since 2004.

The Hornets pulled away by outscoring Nampa Christian 38-6 in the second half, 24-0 in the final quarter.

Carter Woodland rushed for 104 yards and two touchdowns for Notus to go along with three 2-point conversions. Elijah Martin added 113 yards and three touchdowns. He also had seven tackles and one interception.

Kieran Miraz added seven tackles, a sack and an interception.

In the wildest game in the Treasure Valley, the Wildcats (4-2, 2-0) rallied from a 28-point deficit in the 1A Division I WIC game.

Wilder extended its lead to 64-54 with three minutes to go.

The Lions shut out the Warriors in a 5A District III loser-out play-in match.

The Mustangs blanked the Eagles in a 5A District III loser-out play-in match.

The Wolves eliminated the Warriors in a 5A District III play-in match.