From a troubled past to a bright future: How basketball saved Vallivue's Amoro Lado

Trouble seemed to find Amoro Lado wherever he went. That is until he picked up a basketball for the first time. 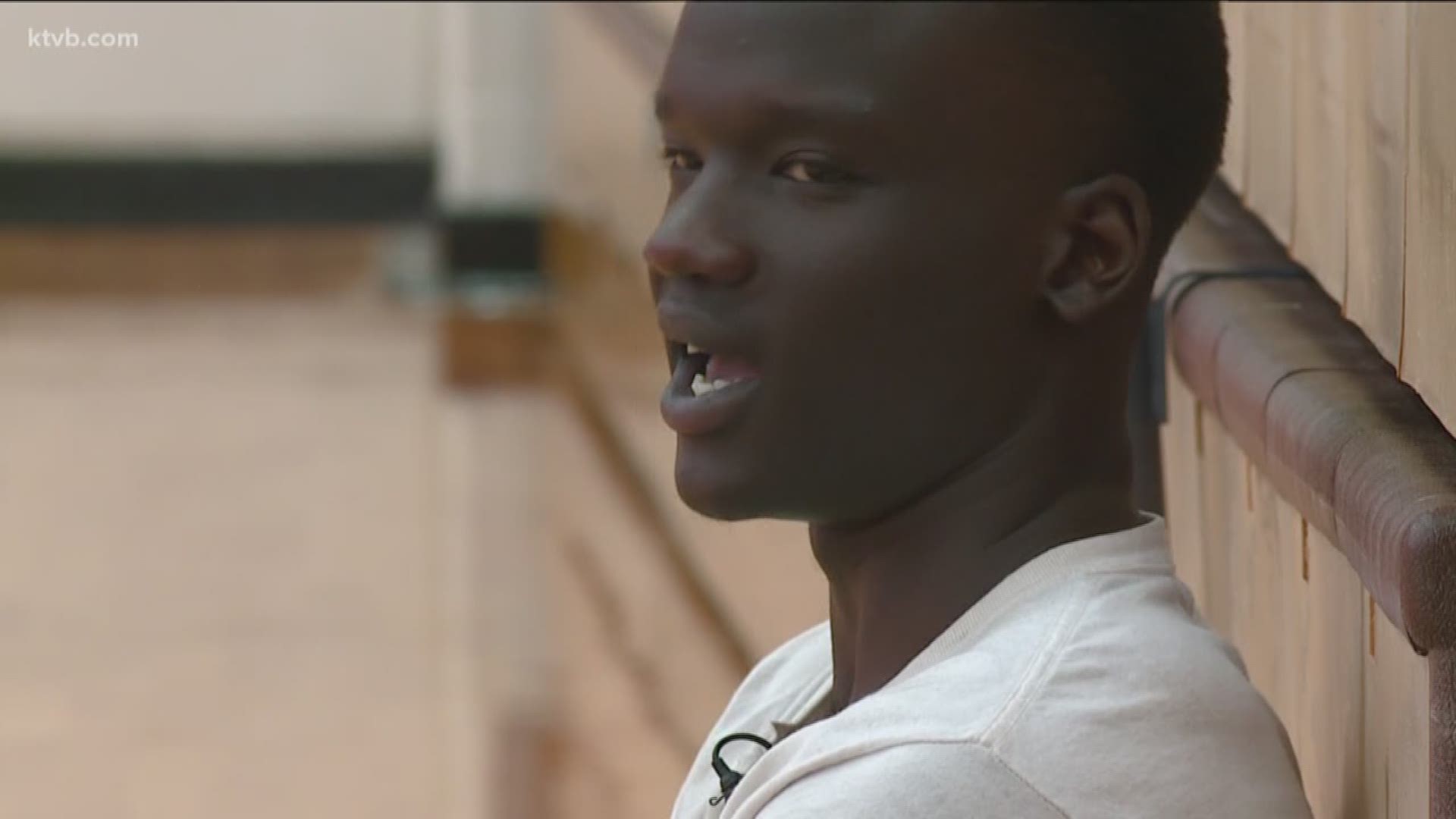 CALDWELL, Idaho — Before Vallivue High School senior Amoro Lado earned a college scholarship to continue his basketball career, he struggled to stay out of trouble.

The opening round of the 4A boys state basketball tournament at Borah High School.

The line of fans to get inside was overflowing into the parking lot, all to try and catch a glimpse of the biggest game of the night: Vallivue vs. Burley.

Up until that point, then-sophomore Lado hadn’t played a single minute for the Falcons’ varsity basketball team that season.

His family, who had been living in Sudan, fled north shortly before he was born after tensions between rebels and the Sudanese government became violent.

The youngest of five siblings, Lado recently got a tattoo to remind him of his childhood in Cairo.

“It just reminds me that I’m different,” Lado said.

Wanting a better life for their kids, Lado’s parents moved him and his five siblings to San Diego where they have extended family.

Lado says growing up there, specifically in the suburb of City Heights, was difficult.

City Heights, just east of downtown San Diego, was once known as the ‘crime capital of San Diego.’

“There was just a lot of gang activity going on, people stealing stuff left and right,” Lado said. “You just hear gunshots here and there some days.”

His parents worked full time to support their family and were rarely home as a result.

“I think he was just kind of the circumstance of just sliding through the cracks and being the youngest,” Lundgren said. “Maybe [his parents] are trying to focus on the older kids and graduating them from high school and what they’re going to do next.

“So he was given a longer leash and just didn’t quite have the guidance that he probably needed, so he developed a lot of bad habits at a young age,” Lundgren added.

In the apartment complex he lived in, there were plenty of kids his age to play with, but he instead found himself running with older kids, who would use him to commit crimes.

“I think it was right around eight or nine [years old] and I’d already been caught by the police three or four times at that age,” Lado said.

He recalls a time when he stole a motorcycle from a lot because someone told him to. Again, the police were called and the older kids blamed Lado.

Another time, his neighbor told him to go get a knife.

“I came back with this big, big knife, [like a] machete, and... the next thing you know, the police came,” he said.

“I would get in trouble at school pulling the fire alarms, I was getting in fights.”

It escalated when he said his friends asked him to bring his BB gun to school.

He colored the orange tip on the end, in order to make it look like a real gun.

The next day, he put his BB gun in his backpack, and when his friends asked to see it at school, they instead went and told school administrators, who called the police.

But Lado said his middle school principal stepped in, and instead of punishing him, he used an incentive-based approach.

“I love Hot Cheetos,” Lado said. “So the principal is like, if you’re good, I’ll give you a dollar every Friday.”

‘Good’ meant no more trouble and improving his grades.

“He was like ‘I’ve been to where you’ve been, I know where you’re coming from, I know who you’re around, don’t let them influence you.’”

So every Friday, the principal checked in with Lado, and if he got good marks for the week, he would give him a dollar, which he used to buy Hot Cheetos.

“It influenced me to do good things instead of the opposite way,” Lado said.

For the first two weeks of his freshman year, he attended Columbia High School in Nampa.

But even 1,000 miles away from his past, trouble found him again.

What started out as a late night game of ‘ding dong ditch’ quickly turned into a felony arrest at 14 years old.

Lado said he later found out the other kids he was with had been breaking into cars and stealing what they could from inside.

“And the next thing you know, the police, they arrested us,” he said.

Soon after, he transferred to Vallivue High School, where he met Lundgren, who was just beginning his first season as the Falcons’ varsity head coach.

“He was very closed off I think and early on and I think a big reason for that is because of all the stuff he had to deal with growing up and he struggled to trust people,” Lundgren said.

What some saw as teenaged rebellion, Lundgren saw as a chance to break down the walls Lado built around himself.

“It’s one of those deals where you’ve got to figure out your players and it takes time and effort, you can’t fake it,” Lundgren said. “You have to put in the work to build those relationships with them, find out about their home life and their girlfriend and what subjects they like in school and all that stuff and once you’re able to do that, some of those walls start to come down.”

With those walls down, Amoro was able to come out of his shell, able to show what he was capable of on the court.

He eventually made the varsity squad as a freshman.

After a breakthrough season, Lado was in the gym every day during the summer between his freshman and sophomore year, trying to improve his game.

But that summer, he broke his leg, derailing the progress he had made.

His older brother, who suffered from epilepsy, passed away in his sleep after complications from a seizure.

Amoro and his brother shared a room and was asleep next to him when he passed.

"I had to get rid of my bed, so now I sleep in the bed that he passed away in."

Though his leg healed, his heart did not.

Basketball became an outlet for Lado, so much so that his schoolwork suffered.

“He never made the correlation between academics and his ability to play basketball,” Lundgren said.

The coach made the difficult decision to take basketball away from Lado until he brought his GPA up to at least 2.5, the minimum for any athlete to compete on a varsity team.

“I knew [basketball] was the one thing that really kept him getting up in the morning and wanting to come to school,” Lundgren said. “But I also knew that if I allowed him to continue to go down that path and to have that victim’s mentality, that it wouldn’t serve him well in life.

“We’d probably be in my office three or four nights a week, mainly doing homework [after practice],” Lundgren added. “A lot of the time his parents would be working graveyard shifts at the factory where they worked, so I’d have to give him a ride home and we’d stop and have dinner somewhere. That’s just kind of how our relationship fostered because I spent so much time with him, not just on the court or in the classroom.”

He said began to notice a change in Lado’s behavior and character, so much so that he decided to help the teen with his ongoing legal battles.

“During his court cases, I wrote letters of support and I went and talked to the judge and tried to explain to him the things that they weren’t seeing off the court and outside of the courtroom.”

All of the criminal charges were eventually dropped because of good behavior.

With no more court appearances, Amoro was able to focus all of his attention to school and basketball.

He managed to keep his grades up and earned his spot on varsity for the next two seasons.

Sitting atop the conference standings, the Falcons were looking to finish out the regular season with wins against 4A powerhouses like Middleton, Columbia, and Bishop Kelly.

Just one month after scoring a career-high 41 points, Lado broke that record again, scoring 42 points to lift the Falcons to a two-point win against Bishop Kelly.

It also happened to be his 18th birthday.

“I couldn’t find one player since the ’60s, when they started keeping those records, that scored at the rate that he has,” Lundgren said.

The Falcons earned their third consecutive trip to the state tournament.

After cruising to a win against Moscow in the quarterfinals, Vallivue ultimately fell to Idaho Falls, who would go on to win it all.

Though the Falcons' season didn't end the way they had hoped it would, Lado's individual success was recognized by the coaches in his conference, who awarded him with the 4A Southern Idaho Conference Player of the Year award.

RELATED: Vallivue's Lado wins 4A SIC Player of the Year

Looking ahead to the future

After graduation, Lado will head to Florida where he will join the Chipola Community College men’s basketball team

And though Amoro won't be hitting shots in Vallivue's gym over the summer as he has for the last four years, his picture hangs along the wall, showcasing his school records.

It's also meant to serve as a reminder those who come after him that even if you're dealt a bad hand, hard work and determination will help get you to where you want to go.

“I think he understands that the world’s not out to get him and I think that was probably one of the toughest things to teach him.”