"I always say we can beat this because it takes a village," said Boise Brave assistant coach Teena Hensley. 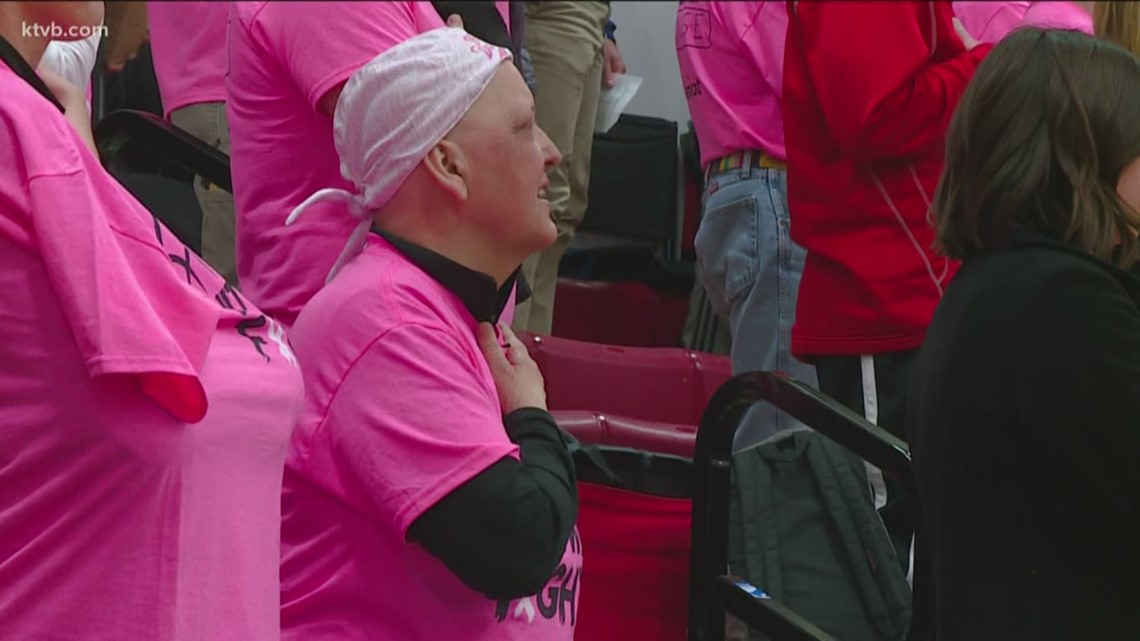 BOISE, Idaho — Boise High School girls basketball coach Kim Brydges and her team are continuing to do an amazing job year in and year out with their annual Pink Zone game, which raises money for breast cancer research, and this year's game is personal for the Brave.

Assistant coach Teena Hensley is defining what it means to be Brave after she was diagnosed with breast cancer last fall.

"Being strong. Being solid," Hensley said. "I'm just humbled by all of the support I've gotten. I always say we can beat this because it takes a village."

For Brydges, Hensley, and the Boise girls basketball team, the Brave have had to be brave.

"That news rocked us," said Brydges.

Hensley has been an assistant coach for the Brave for over a decade and says even with the cancer diagnosis, she still feels blessed that it was detected early on.

"It was shocking, I don't think anyone believes they're going to get breast cancer, it was unbelievable. Detected early, I'm very blessed, so it was early stage, and so I'm just about done with my treatments," said Hensley.

While this winter has been different than years past for Hensley, one thing hasn't changed - the unwavering support from her boss and players.

"So supportive, I've been with the program for 15 years and Kim is a very special friend," she said.

"More and more, one in eight women are diagnosed with breast cancer over the course of their lifetime, those are the facts," Brydges said.

Each year, the Brave hold a raffle with all money raised during the Pink Zone game is donated to the Susan G Komen foundation, this year they set a new annual record by raising $4,795.

RELATED: 'Today was the happiest day of my life': Teen rings bell signaling the end of 3.5 years of chemotherapy

"It is huge. It is our largest third-party fundraiser in the state of Idaho. So it's the biggest one that someone else plans," said Jodi Weak, the Susan G Komen executive director.

Hensley said the energy during the game is incredible. Her players help make sure that she can feel how much she means to the team.

"Teena has always been one that puts others before her, so to have a night for her, I know it meant a lot to her and it definitely meant a lot to us," said Boise junior guard Emily Cadwell.

"It means a lot, that's been a trademark of our program, I think it gets a little bigger every single year. Teena turned to what Teena does best, she was thinking, 'Okay, I'm going to approach this with optimism, I'm going to fight,' and that epitomizes Teena," she said.

All qualities that exemplify what being Brave means.

"I feel so fortunate that I caught it early, I'm feeling really good," Hensley said.

She is set to wrap up her chemotherapy treatments soon before heading into radiation. Amidst the treatments, she is still a regular at practices and games with the team.