WATCH Friday Night Football: Teams across the Treasure Valley fight for the playoffs in week eight

It's the final week of the regular season for the 5A SIC, and teams like Rocky Mountain and Eagle are chomping at the bit to snatch a spot in the state playoffs. 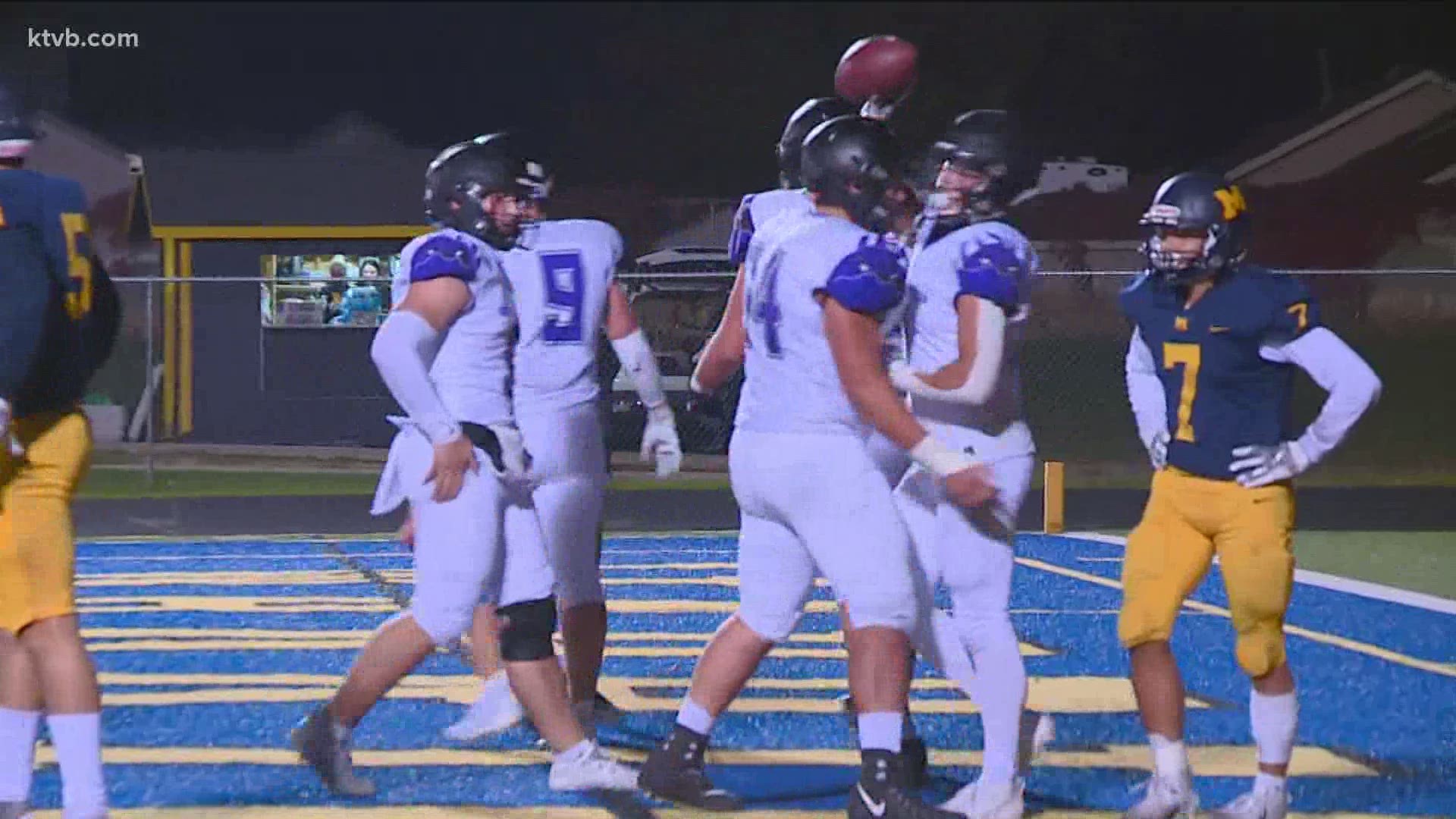 BOISE, Idaho — The last several months might feel like a lifetime, but the last several weeks of the Idaho high school football season has flown by. It's now week eight - the final week of the regular season for the 5A, leaving teams like the Rocky Mountain Grizz and Eagle Mustangs chomping at the bit to snatch a spot in the state playoffs.

In the 4A SIC, it's the second to last week of the season and four teams have a shot at state, but none of them control their own destinies.

And then there were two after the dust settled on week eight.

Four teams entered 4A Southern Idaho Conference play on Friday tied for first. Two teams exited play Friday still tied atop the standings although technically Emmett has an edge over Bishop Kelly by virtue of a 40-34 win earlier this season.

Middleton did its part to shake things up, pulling away from visiting Nampa 37-21 on Friday.

Justus Del Rio hauled in a 22-yard touchdown pass from Avery Downey to extend Capital's lead to 22-12 with 10:01 to go in the fourth quarter.

Borah (0-4) scored to pull within the final margin.

The Lions scored on a Parker Rushton touchdown to take an early 6-0 lead.

Capital took the lead for good at 7-6 when Downey scored on a 13-yard scamper. 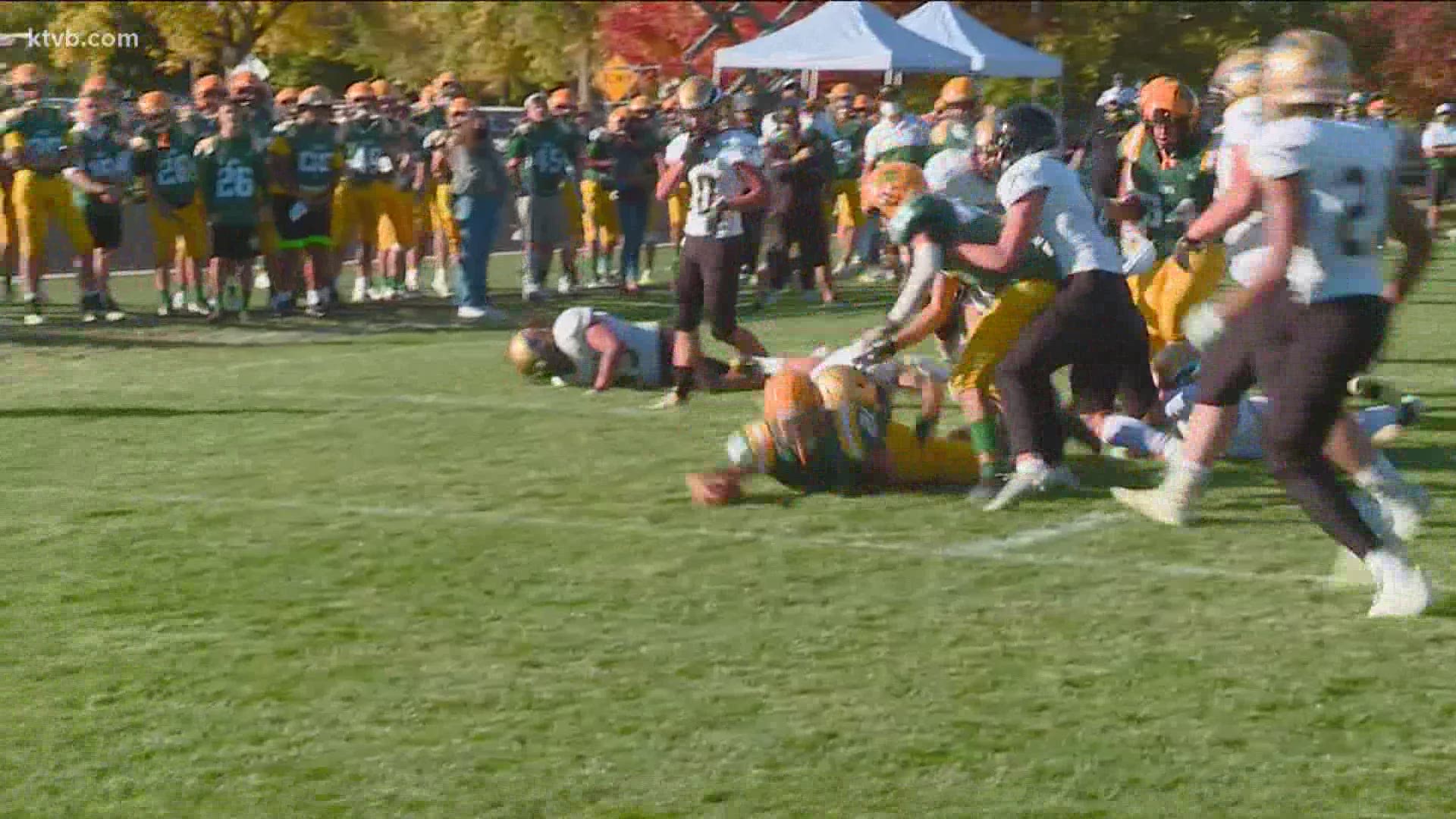 The Warhawks (3-5) rallied from a 6-0 halftime deficit to knock off the visiting Brave (1-4) in a nonleague game. The Warhawks passed for 258 yards. 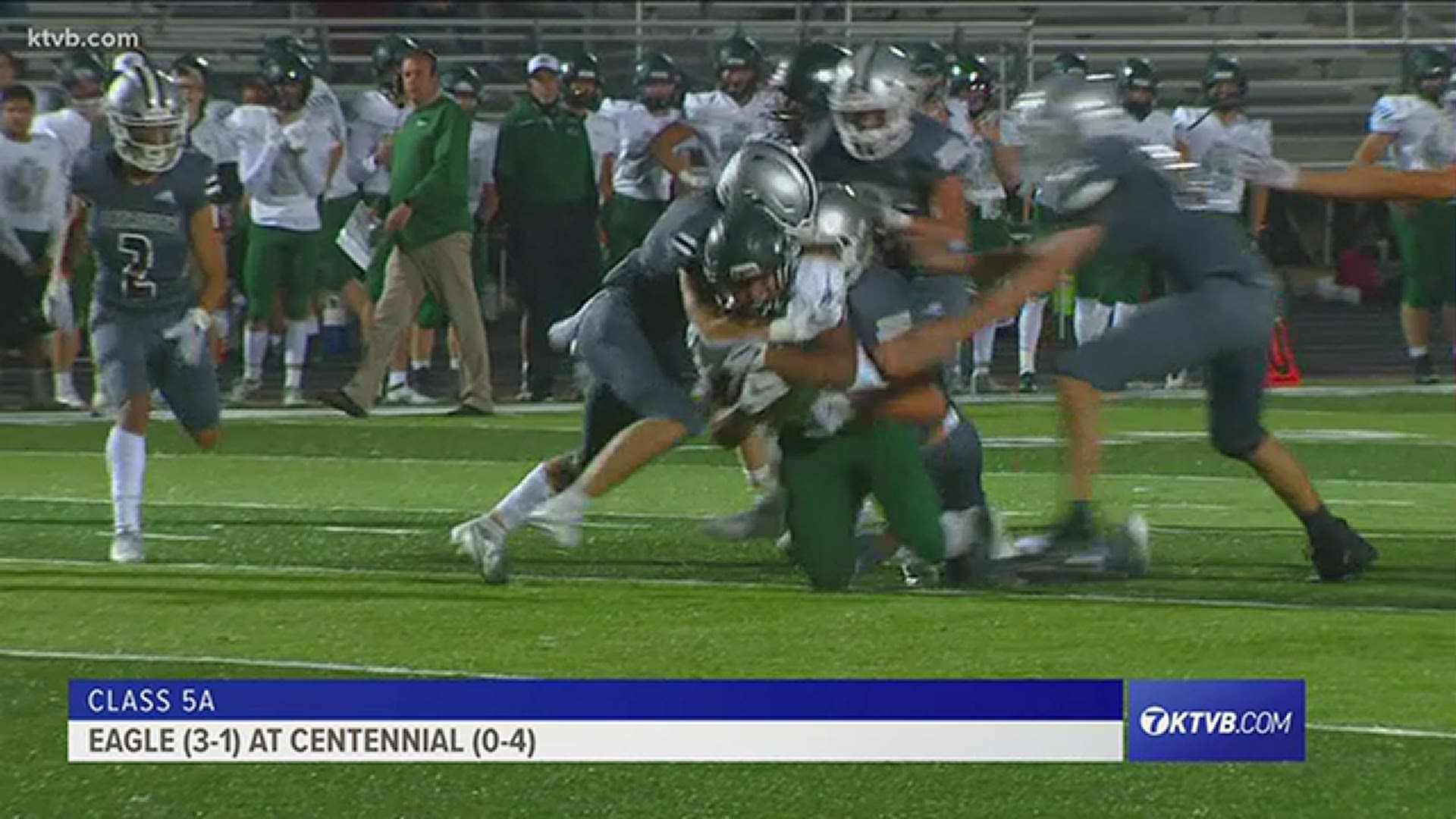 Columbia led 14-7 early before the Huskies pulled even and then away.

For the first time since 2004, Melba captured the Western Idaho Conference championship, cruising past the Trojans (3-5, 1-2) .

Melba got out to a 33-0 lead and was never threatened.

The Mustangs piled up 620 yards of total offense, 461 coming on the ground. Zane Helm led Melba with 198 yards rushing on 16 carries and Trace Stimpson had 160 rushing and four touchdowns. Quarterback Henry Clark passes for 158 yards.

Ky McClure led Middleton, passing for 197 yards on 25-of-39 attempts and one touchdown and rushing for another 121 yards. Brock Phillips added 106 yards rushing and four touchdowns.

Spencer Lyman led the Pilgrims with 132 yards rushing and a touchdown, Javon Lindeman added 110 yards and Erin Vian and Bailey Hite combined for 127 and four touchdowns.

Julian Gallegos and Kieran Miraz combined for 10 tackles and two sacks to lead the Pirates' defense.

Quarterback Jake Farris led Mountain View with 289 yards on 18-of-25 attempts and two touchdowns. Quintez Evans rushed for 81 yards and one touchdown. 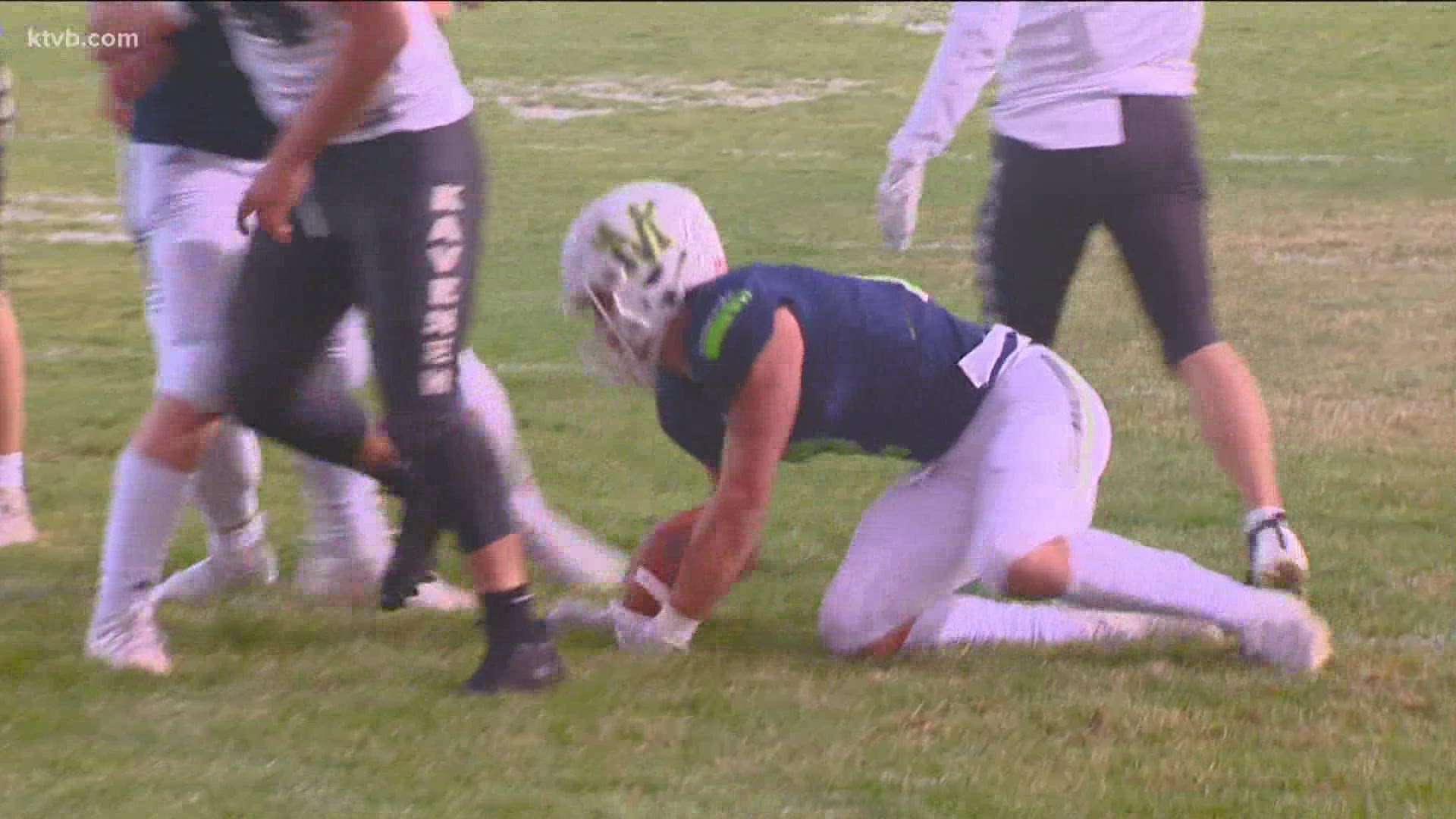 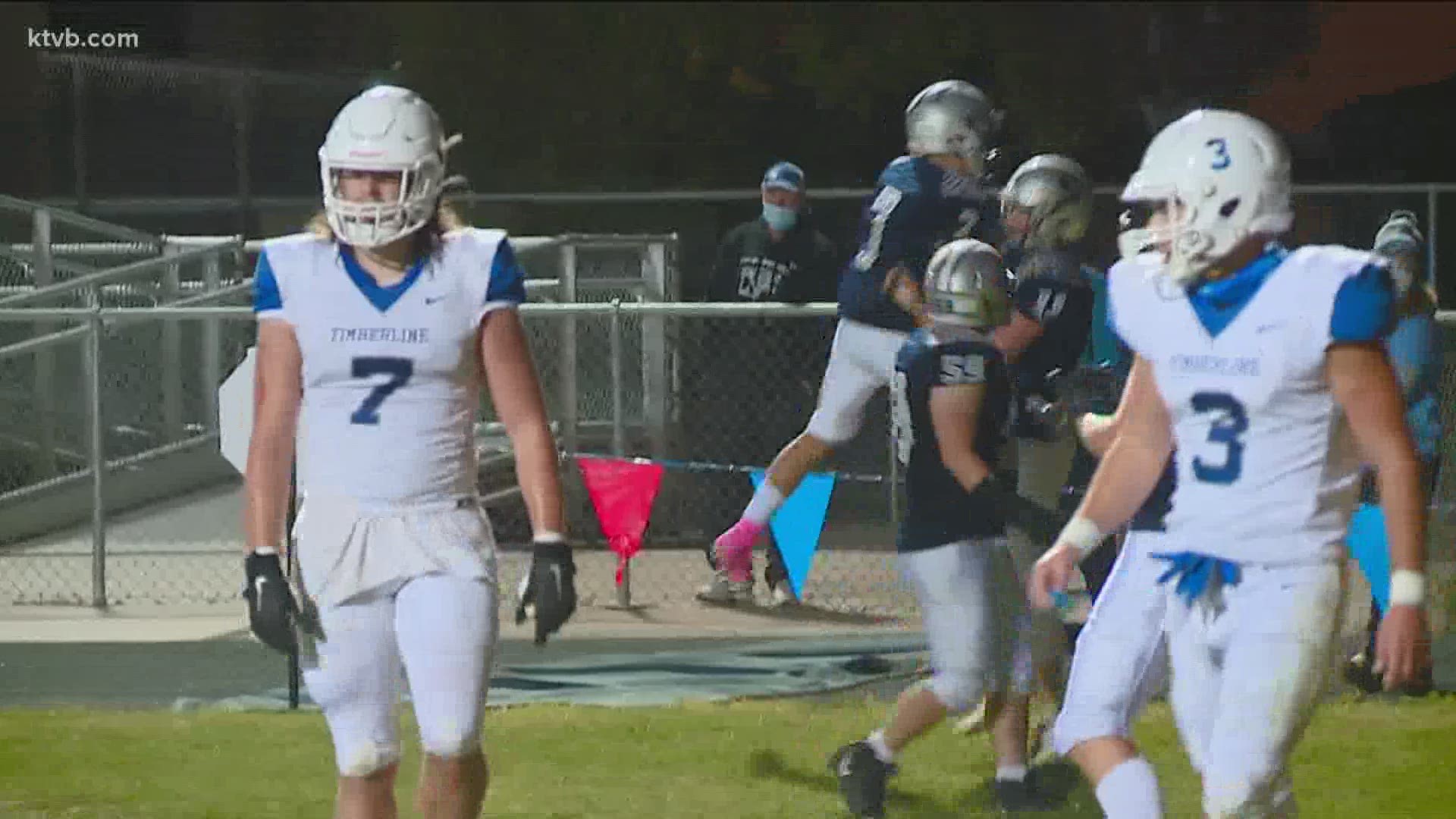 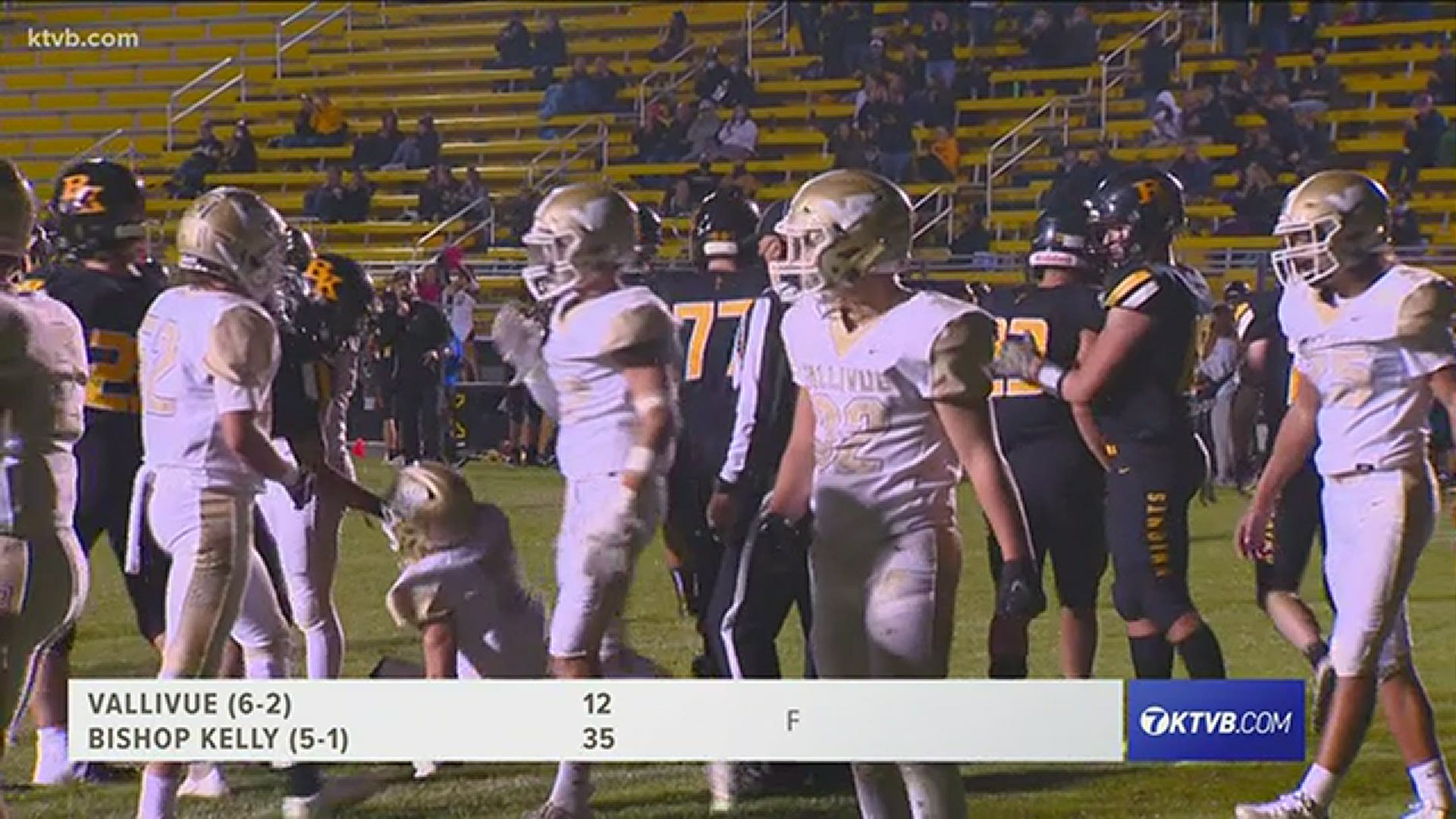