The College of Idaho football team notched its first win of the season, defeating Eastern Oregon 28-20. 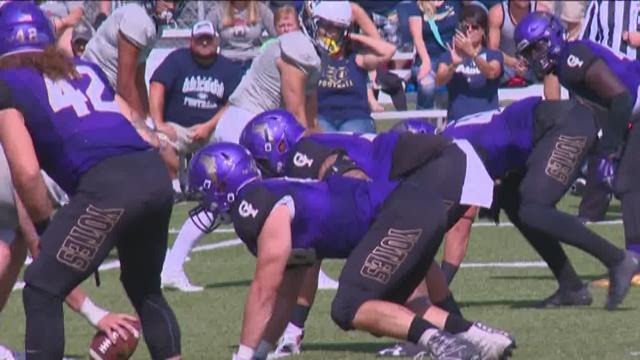 CALDWELL - The College of Idaho Yotes won their first game of the season Saturday, defeating the Eastern Oregon Mountaineers by a score of 28-20.

The Yotes (1-3, 1-2 Frontier Conference) hosted the Mountaineers, ranked 11th in the NAIA. after starting the season with three losses.

The Yotes struck first, reaching the end zone twice in the first quarter, first with a 4-yard run from Mike Kirby, followed about seven minutes later with an 18-yard touchdown pass from Tyler Cox to Jack Hogeboom.

Eastern Oregon's Nathan Harden ended the Mountaineers' scoring drought with a 45-yard field goal early in the second quarter. Victor Dias scored on a 3-yard run just before halftime to narrow the College of Idaho's lead. Harden would kick another field goal late in the third quarter to make it a 14-13 game, in favor of the Yotes.

Just over two minutes into the fourth quarter, Kirby ran in his second touchdown from 6 yards out. Darius-James Peterson made a one-yard run across the goal line with 6:57 to go.

Eastern Oregon (1-2, 1-2 Frontier Conference) scored with 2:12 left in the contest, when Kelly Brenden hauled in a 28-yard pass from Kai Quinn.

The College of Idaho racked up 440 yards of total offense Exactly half of those yards came through the passing game. Peterson threw for 143 yards, and Cox threw for 77 yards, including the touchdown connection with Hogeboom. Peterson also led in rushing yards, with 105 yards and a touchdown on 19 attempts.

Both teams are on the road in Montana next weekend.

The College of Idaho Yotes will play at Rocky Mountain College in Billings. Kickoff is scheduled for 1 p.m. on Saturday, September 23.