College of Idaho's coach on moving football to the spring: 'I just don't think that postponement solves all the issues'

Before the Yotes' conference announced football would play in the spring, head coach Mike Moroski told KTVB they favored a fall kickoff. 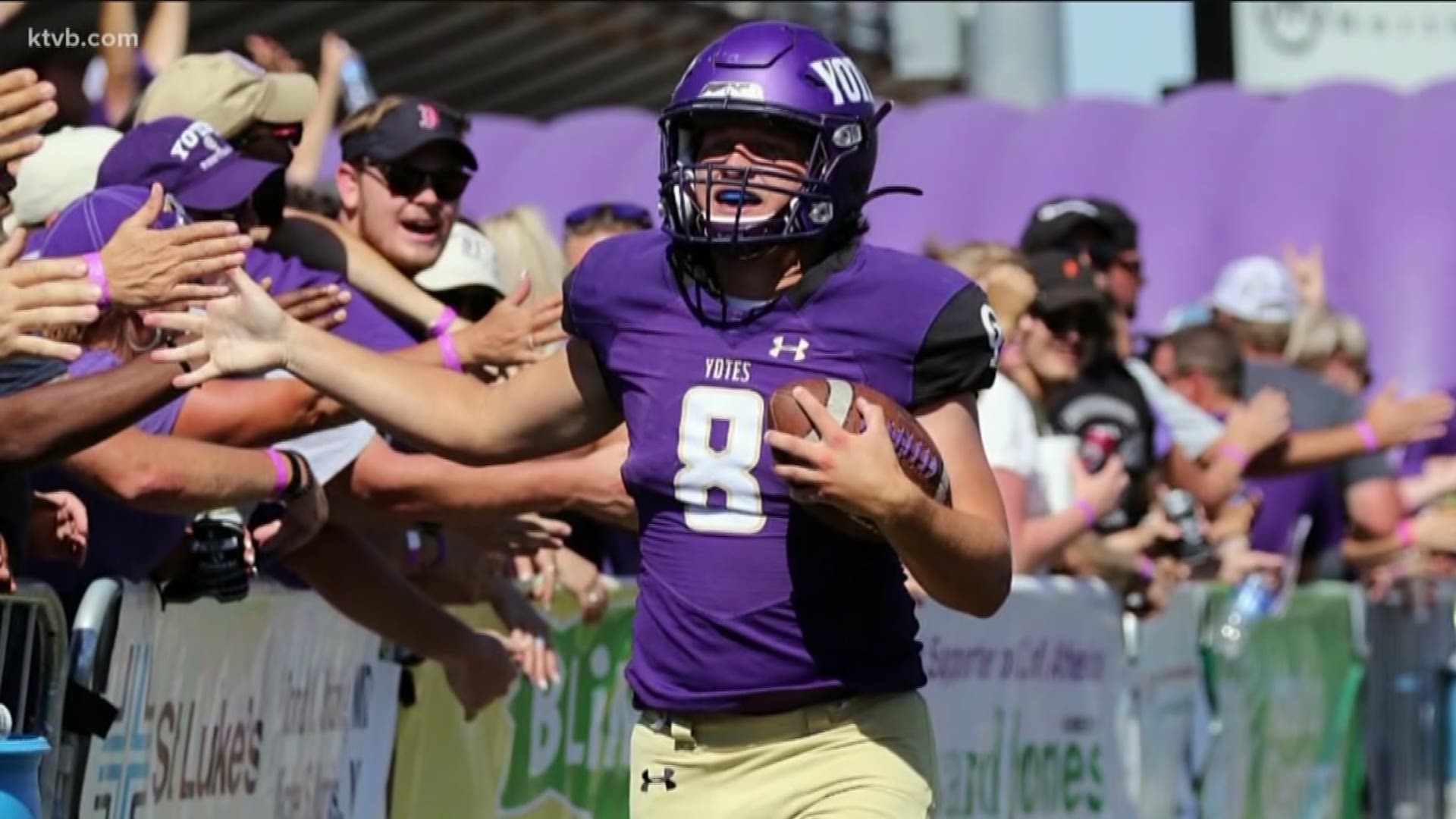 CALDWELL, Idaho — The College of Idaho football program now has clarity on what the upcoming season looks like. Before the Cascade Collegiate Conference announced all fall sports to the spring, the Yotes football team had three options: a fall season, a spring season, or potentially no season at all.

A majority of the school's athletic teams play in the Cascade Collegiate Conference, who Moroski believed were leaning towards the postponement of fall sports.

Yotes football, however, plays in the Frontier Conference, and the school favored a fall kickoff, according to Moroski.

One thing that could help unify the decision is the NAIA, the association that oversees both leagues.

"My big point isn't in disagreement with postponing fall sports. That may be the wisest thing to do," Moroski said. "The NAIA is going to get involved at some point. Then it's clear. Then everyone is in the same boat and we don't have to deal with these uncomfortable situations."

Before the announcement, Moroski remained an optimist about playing a reduced eight-game schedule this coming fall.

"Football itself presents a lot of problems," he continued. "But there is a sensible way to approach it, whether it's practice or the weight room. Certainly, in competition there's not going to be social distancing. That's where testing and symptom tracking and tracing is so so important."

While testing as frequent as most Division I programs currently are isn't an option for the College of Idaho, they have a system in place to monitor symptoms, according to Moroski. Each time a player or coach enters the football offices, weight room or practice field, they will be checked for COVID-19 symptoms.

So far, only one Yote football player has tested positive for COVID-19. Through contact tracing, 24 additional players and Moroski himself were then tested. All 25 tests came back negative.

"Above all, I'm concerned for my player's safety and coach's," said Moroski. "But I don't want to be so over-concerned that it becomes problematic and prohibitive to do anything."

Although some football players have remained in Caldwell to workout throughout the summer, those that aren't currently there will begin arriving on August 8 in anticipation of the first official practice on August 15.

If the season were to go off as planned, the College of Idaho was scheduled to open the season at Carroll College in Helena, Mont. on Sept. 12.

"There always has to be an intelligent, safe approach," Moroski stated. "I just don't think that postponement solves all the issues."

"You know, talking to my players, it's crushing for them," he added. "And again, I'm not a scientist, but does it seem more healthy to be practicing in August and September, or in January and February?"

JAY: Coach Moroski, it obviously feels like the sports landscape is ever-changing because of all the impacts of COVID-19. Later on this week, it looks like you guys are going to find out your fate, whether you play in the fall or in the spring, and it seems like they're leaning towards the spring at this moment. So, what are your thoughts about moving football back to the springtime?

MOROSKI: Well, I'm very apprehensive, to be honest with you. First of all, let me say, COVID-19 is the real deal. I mean there are people dying and no one's happy about that. There's a lot of people sick and no one's happy about that. I'm not happy about that. I know that our presidents and athletic director Regan Rossi and literally 50 other people have task forces going and they're consulting with medical professionals. There always has to be an intelligent, safe approach. I just don't think that postponement solves all the issues. You know, talking to my players, it's crushing for them. And again, I'm not a scientist, does it seem more healthy to be practicing in August and September, or in January and February?

JAY: I feel like I know you well enough to ask you this question, but you personally, being around hundreds of young athletes, are you worried about COVID at all?

MOROSKI: Thanks for putting it so kindly, Jay. I am concerned in one sense that I don't want to get the COVID, but I'm listening and reading all the time and I just think there's a way. Above all, I'm concerned for my player's safety and coach's, but I don't want to be so over concerned that it becomes problematic and prohibitive to do anything.

JAY: I know the NAIA level is much different than FBS Division I football in terms of resources and money, and that does apply to testing. So does the College of Idaho have a plan of how they will handle athletes that are showing COVID-19 symptoms?

MOROSKI: So the NAIA rule right now is that every athlete in every sport that they have to take a COVID test and test negative seven days before the first competition. And that may well be the only test that we take throughout the year unless they're symptoms. You're right, the availability of the tests also is a significant problem.

JAY: If the season is moved back to spring. How much does that change things for you, maybe even by this weekend?

MOROSKI: It changes drastically. But we'd what we do. We would treat the fall kind of like we normally treat a spring. And so we would just continue on track. Guys need to lift. But what I've loved about being here, Jay is its football country. I love Boise State. I love what [Boise State head coach Bryan Harsin] is doing. I love the high school coaches in the Treasure Valley. And I really really love what we're doing here in Caldwell. It's exciting and fun, and I think in the midst of the pandemic, people need normalcy.