As we sit two weeks away from the NFL Draft, Brett Rypien seems to be in a pretty good position to be picked. A lot of experts like him as a darkhorse.

Boise State’s Brett Rypien is the trendy pick for “Most Overlooked Quarterback in the 2019 NFL Draft.”  Bleacher Report's Maurice Moton is in that camp and looks at him this way: "Rypien isn't going to wow anyone with his arm strength or mobility, but he checks multiple boxes with his intangibles.”  Moton adds that Rypien has the "three P's" in his favor—preparation, pedigree and pro-system success.  PFF Draft has some nitty gritty: “Brett Rypien was MONEY on crucial downs this season: he had 15 big-time throws, a 12-to-1 touchdown to interception ratio, and a 113.9 passer rating on 80 3rd and 4th down completions!”  Bottom line: it indeed appears he’ll be the first Bronco QB ever to be drafted in the NFL’s seven-round era.

For a counterpoint of sorts, we go back to Lance Zierlein of NFL.com: “Light on measurables, but high on intangibles, Rypien's lack of size, mobility and NFL arm talent makes it unlikely that he'll ever become a serviceable starter.  What has a chance to save him is his football intelligence, accuracy and consistency.  He stepped right in as a freshman and proved he could not only survive, but thrive and grow.  A troubling number of interceptions were due to lack of arm strength so he needs to find a timing-based passing game in order to find a home as a back-end backup.”  My counterpoint to that last claim: Rypien’s arm strength was impressive at the NFL Combine, and the 10 pounds of muscle he has added in training for the draft cannot be underestimated. 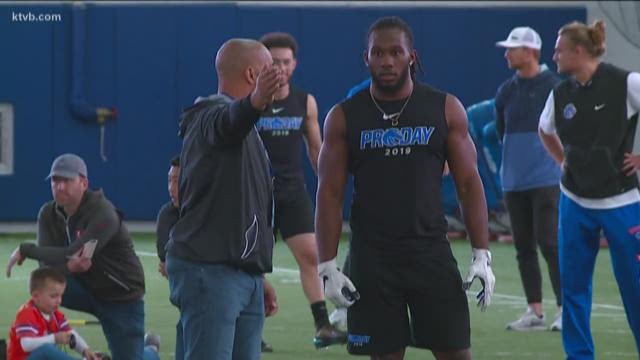 STEELIES HOPE TO PLAY DEEP INTO MAY

Everybody in Boise hockeyland is hungry for postseason success as the Idaho Steelheads open the Kelly Cup Playoffs tonight against the Utah Grizzlies in CenturyLink Arena.  There was a modicum of that a year ago, as the Steelheads advanced past the first round for the first time since 2014.  They did it in dramatic fashion, rallying from a three games-to-none deficit to beat Allen in seven games.  Still, the Steelies haven’t been to the Kelly Cup Finals in nine years and haven’t won it all since 2007.  One advantage for Idaho in this series is knowing who will be between the pipes.  It’ll primarily be Tomas Sholl, who finished second behind Michael Houser of the Cincinnati Cyclones on Thursday for ECHL Goaltender of the Year honors.  Sholl was 26-12-1 in the regular season.

TRANSFERS MAKE FOR A TOUGH TRANSITION

Steve Alford landed in Reno Thursday and is set to be introduced as Nevada’s new coach at a press conference today.  Alford is getting a 10-year contract (financial details not yet disclosed, but he’ll do just fine).  His first concern will be the Wolf Pack’s roster, not only depleted by the loss of seven seniors, but also another seven players who have opted for the transfer portal, including former five-star recruit Jordan Brown and top returning scorer Jazz Johnson.   The portal guys could still return—Alford now has to “re-recruit” them.  There’s hardly anyone left.

How are they feeling about former Nevada coach Eric Musselman in Reno?  Well, this didn’t help.  Musselman, the new Arkansas coach, was a guest on the Jim Rome Show on KTIK Thursday.  Musselman said that at a welcome event Wednesday night in Fayetteville, he was asked which college basketball programs he admired while he was growing up.  He replied that he’d have to go with the T-shirts he used to wear as a kid: “UCLA, UNLV and Arkansas.”  UNLV?  Ouch.

GATES AND HIS UNIQUE STORY LOOK FOR NEXT CHAPTER

Former Idaho Stampede coach Bryan Gates, an NBA assistant in Sacramento the past three seasons, is in the job market now with Dave Joerger having been fired by the Kings Thursday.  Gates has a great story.  He attended Boise State and was a basketball junkie, but he didn’t play hoops there.  When the Stampede were born in 1997, Gates begged the team’s first coach, Bobby Dye, for a job—any kind of a job—and he ended up as an intern.  He was promoted to the staff and was with the team through 2001 before bouncing around basketball’s minor leagues.  He returned to the Stamps in 2006 as head coach and won the franchise’s only D-League championship in 2008.  Gates has been on various NBA staffs the past 10 years.

The Boise State women’s softball team went 20-2 in non-conference games this season and had a brief stay in the Top 25.  But the Broncos are 3-6 in Mountain West play, so this weekend is critical in righting the ship.  If Boise State is going to defend its conference championship, it has to kick it in gear now.  The Broncos are already 6½ games behind first-place Colorado State.  They host Utah State at Dona Larsen Park today, Saturday and Sunday.

Another nugget on former Boise Hawk Daniel Vogelbach.  The Seattle Mariners are rolling, having won their sixth game in a row with a 7-6 win at Kansas City Thursday.  Vogelbach led off the 10th inning with a solo home run to win it as Seattle became the first major league team in history to homer in each of the first 15 games of a season..  Vogelbach hit four home runs in all of 2018 with the Mariners.  He hit five homers on the M’s just-completed eight-game road trip.

San Francisco Giants outfielder Barry Bonds catches his godfather, Willie Mays, for the number three spot on baseball’s career home run list.  The suspiciously bulked-up Bonds deposited a pitch out of what is now Oracle Park and into McCovey Cove on Opening Day in San Francisco, the 660th homer of his career.  He would pass Mays the following day and set his tainted sights on Babe Ruth and Hank Aaron.