It’s as recognizable around the globe now as the Idaho potato, and it has a longer shelf life than our beloved spuds. But man, did Boise State need new blue. 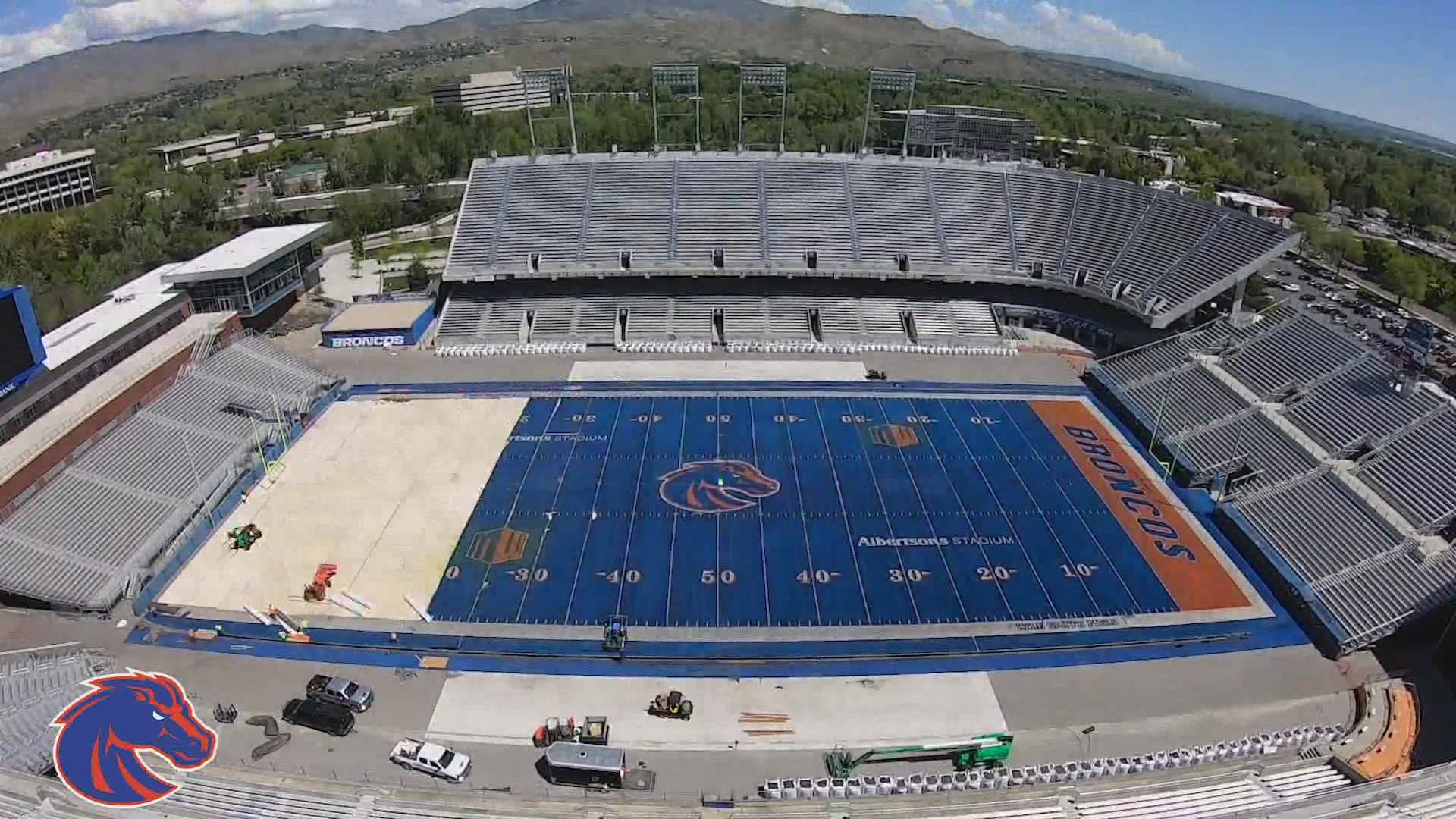 Boise State’s iconic blue turf, 2019 style, is ready for prime time.  The new carpet will be introduced to the public this evening during an Open House at Albertsons Stadium.  This is the sixth edition of the Blue, replacing the version that had lasted nine seasons (maybe a year too long, if you ask a certain disgruntled BYU quarterback).  The first two iterations were AstroTurf, the sandpaper-like surface infamous for rug burns.  The shortest stint for a blue turf run was two years.  The 2008 field was shiny during night games in the rain, never moreso than in a Thanksgiving weekend showdown with Nevada in 2009 (when Kellen Moore outdueld Colin Kaepernick).  It looked almost silver on ESPN2, and a new carpet was laid in 2010.  I don’t know what the new turf will look like in the rain, but it sure looks good in the sun.

Fans can buy chunks of the old blue turf after all—one square foot for $39.95.  It’ll be first-come, first-served today, as only 500 pieces are available.  Think about the games that have been played on that little piece of history.  In fact, the very first one should be enough.  It was the 2010 contest against No. 24 Oregon State, won 37-24 by the third-ranked Broncos.  A 94-degree late September day was capped by an ABC telecast with Brent Musberger in the booth.  And you know how it started.  ESPN’s College GameDay was on the blue before the crack of dawn, and 13,250 fans got up early to join them.  Remember the celebrity picker?  Picabo Street.

IRREPRESSIBLE HORTON WILL CARVE HIS PATH

If you follow former Boise State cornerback Tyler Horton on Twitter, you’ll see that he’s always about staring down adversity.  Horton, an undrafted fee agent, has been released by the Miami Dolphins, but he apparently has a plan.  According to Barry Jackson of the Miami Herald, Horton’s agent, Barry Gardner, said “Horton informed the Dolphins he would like to pursue a law enforcement career in his hometown of Fresno.  He has begun applying to police academies.”  That might be it for football.  Horton was a solid performer and a great leader for the Broncos.  He scored three defensive touchdowns last season, included the game-turning 99-yard pick-six at Nevada.  But Horton wasn’t invited to the NFL Combine—and then was dogged by a 4.72-second time in the 40-yard dash at the Broncos’ Pro Day.

DIAMOND DOINGS – ONE OF ‘EM STICKY

It’s hard to look at this and think there isn’t a big cloud over the Downtown Boise stadium project.  On April 15, Boise State outlined a series of requirements that “could provide the financial and logistical incentive to consider joining” the project.  But the university said it was still looking at an on-campus ballpark for its revived baseball program.  And Boise State doubled-down on that Tuesday, announcing that its focus will be on its own facility on Beacon Street south of Albertsons Stadium.  The Broncos will play at Memorial Stadium next year, but they want to be in their own place in time for 2021.  And the way things are going, the Greenstone Properties project can’t possibly happen by then.

Fresno State just missed on the NCAA Super Regionals, falling to Stanford 9-7 Monday night.  But it was a banner year for Mountain West baseball.  The conference had two players selected in the first round of the MLB Draft Monday for the first time since 2013, as UNLV shortstop Bryson Stott was selected No. 14 overall by Philadelphia and Bulldogs pitcher Ryan Jensen was taken with the No. 27 pick by the Chicago Cubs.  More inspiration for the new Boise State baseball program, which added junior college pitcher Dawson Day on Tuesday.  Day was the Northwest Athletic Conference Player of the Year with Mount Hood Community College after striking out 104 batters in 60 innings.

How it affects the 2019 Boise Hawks remains to be seen, but at the top of the Colorado Rockies’ draft list was first baseman Mike Toglia of UCLA, the 23rd overall pick in the draft.  The Rockies tried to get him as a 35th-rounder out of Gig Harbor, WA, three years ago.  It was certainly worth the wait for Toglia.  In the second round, Colorado chose Georgia third baseman Aaron Schunk with the 62nd overall pick.  Members of the initial Hawks roster will arrive in Boise on Thursday, with the season beginning a week from Friday at Salem-Keizer.  Locally, BYU shortstop Jackson Cluff, a Rocky Mountain grad, was drafted in the sixth round by the Washington Nationals.  Cluff said he’ll forego his senior season in Provo to sign with the Nationals.

The Spanish connection continues for Boise State women’s basketball.  Marta Hermida is gone, but coach Gordy Presnell has signed Laia Soler from Mataro, Spain, to his 2020 recruiting class.  Soler, who holds dual Spanish and Chilean citizenship, is the third 2020 signee, joining Chinma Njoku and Kimora Sykes.  Soler has spent the last three seasons with Segle XXI of Spain’s Liga Feminina 2 (women’s second division).  There will be opportunities on the Broncos’ squad in 2020-21.  The two-time defending Mountain West champions will be senior-heavy next season, with Riley Lupfer, Braydey Hodgins, Jayde Christopher, A’Shanti Coleman and Ellie Woerner.

Novak Djokovic finally puts a French Open trophy in his case with his 11 other titles in tennis’ major tournaments.  Djokovic beat Andy Murray in four sets on the red clay of Roland Garros to become the eighth man in history to complete a career Grand Slam.  The Serbian star finally triumphed after having reached the French Open final in three of the previous four years.  Djokovic also became only the third player to win four straight majors, joining old-time legends Rod Laver and Don Budge.