There were lots of Dallas Cowboys fans wearing blue and orange Sunday in AT&T Stadium. Before they saw solid performances by Leighton Vander Esch and DeMarcus Lawrence, they got a scare from Tyrone Crawford.

Boise State players were treated Sunday to a high-energy experience they hope they can carry with them into Wednesday’s First Responder Bowl.  The Broncos attended the Dallas-Tampa Bay game at AT&T Stadium and watched the Cowboys beat the Buccaneers 27-20.  They especially came to see the former Broncos on the Dallas roster, but one of them lasted only two plays.  Tyrone Crawford suffered an apparent neck injury and was carted off on a stretcher and transported to the hospital.  Fortunately, reports Sunday night said all tests were negative, and Crawford was released.  On the field, the Broncos were treated to a career-high 15-tackle day by their defensive leader from last year, one Leighton Vander Esch.  Plus one of DeMarcus Lawrence’s patented sacks.

Now it’s all about the game against Boston College—two more days of prep, and it’s game on in the Cotton Bowl stadium.  But there are issues.  Boise State will not be at full strength at wide receiver, for two reasons.  Coach Bryan Harsin revealed Sunday that Khalil Shakir remains out with the injury he suffered six weeks ago on his winning touchdown catch versus Fresno State, and John Hightower—whether he’s healthy or not—has been ruled academically ineligible for the game.  Running back Robert Mahone also failed to meet fall semester academic requirements.  That’s a tough self-inflicted sentence for Mahone, who’s a Texan and misses an opportunity to play at home in a bowl game.

Let’s check out the Broncos’ bowl portfolio, because it’s part of the essence of the program.  This will be Boise State’s 19th bowl game, and its 17th in a row.  That streak is easily the longest of any Group of 5 team.  In fact, only four Power 5 schools have longer bowl runs (Virginia Tech, Georgia, Oklahoma and LSU).  It’s interesting when you break down the Broncos’ opponents.  Nine of them were Power 5 schools, six of them were non-BCS teams that have since moved up to the Power 5 (three bowls against TCU, two versus Louisville and one against Utah), and just three that have remained Group of 5 programs through-and-through.  Boise State’s bowl record is 12-6, while Harsin’s mark is 3-1.

WILSON SHINES IN A DIFFERENT SHADE OF BLUE ON THE BLUE

Zach Wilson set a Famous Idaho Potato Bowl record for completion percentage.  Oh really?  The BYU true freshman was 18-for-18 for 317 yards and four touchdowns as the Cougars blew past Western Michigan 49-18 Friday in their all-blue uniforms on the blue turf.  Everything Wilson touched turned to gold.  In fact, he could have had two interceptions had tight end Matt Bushman not twice snatched the ball away from WMU defenders.  Wilson was a pedestrian 8-for-8 in the first half for 95 yards as BYU trailed 10-7.  In the end, he had the most completions without a miss in the history of college bowl games, drawing references to guys like Jim McMahon and Ty Detmer among the Cougar faithful.

Bronco Nation is still trying to figure out how it feels about Wilson’s record performance, considering he was a Boise State commit a little more than a year ago.  But the big picture for BYU is: it has its quarterback, and in the second half Friday it may have finally found an identity.  The Bronco-Cougar rivalry will have juice over its remaining five years (and hopefully more).  One other Famous Idaho Bowl observation: there was a strong turnout by BYU fans, but attendance was still only 18,711.  That’s just the way it is.  For the first time, the bowl cordoned off the upper deck of Albertsons Stadium on the west side, the area the TV cameras generally can’t see.  That put more people in the stands on the far side.  Good idea.

BRONCO HOOPS GETS A SHOT IN THE ARM

I noticed Saturday that Boise State was a 5½-point favorite going into its game against Pacific in Taco Bell Arena.  I thought that was noteworthy with the Tigers sporting a 9-4 record and a four-game winning streak—and the Broncos struggling at 4-7.  But Boise State put together a 40-minute effort and beat UOP 83-71.  The Broncos never trailed, shooting 52 percent from the field and going 10-for-12 from the free throw line over the final four minutes.  Like in the Loyola Marymount game, the two key guys who stumbled at Oregon were on fire.  Justinian Jessup poured in 20 points with four three-pointers, and RJ Williams put up 17.  “This team kept competing and won the game,” said coach Leon Rice on his KBOI postgame show.  “That’s a skill that is learned.”

The Broncos feel better about themselves now going into the marquee game of their non-conference schedule this Saturday night against Oregon.  Boise State can rarely land RPI-rich opponents at home, and you can’t play ‘em all on the road.  So, save for games like those versus the Ducks, major early-season tournaments at neutral sites are important.  And the Broncos will play in their sixth such event in seven years when they participate in the 2019 Diamond Head Classic a year from right now.  Boise State will be joined by Washington, Georgia Tech, Hawai'i, Houston, Portland, UTEP and Ball State.  The Broncos were runnersup in the 2013 Diamond Head Classic, beating Hawaii and South Carolina before falling 70-66 to No. 14 Iowa State in the championship game.

The weekend ended the way it began for the Idaho Steelheads.  They’re still one point behind Utah in the ECHL Mountain Division after trading routs with the Grizzlies in CenturyLink Arena.  Steelheads goalie Ryan Faragher had trouble carrying the ECHL Goaltender of the Week banner Friday night in a 5-1 thumping.  But the Steelies turned it on Saturday night, scoring the first three goals of the game, two of them by Tony Calderone.  Utah tied it up with three scores of its own, but Idaho tallied four more and skated away with a 7-3 victory.  Tomas Sholl got the win, improving to 9-4 on the season.

Back to football: Hawaii got its hat handed to it Saturday night, falling 31-14 to Louisiana Tech in the Hawaii Bowl.  Cole McDonald, who was red-hot early this season, split time with Chevan Cordero at quarterback for the Warriors and was just 10-of-20 for 83 yards and a touchdown with two interceptions.  McDonald and Cordero were sacked a combined nine times as UH was held to 226 total yards in Aloha Stadium.  Also, the personal foul-plagued Warriors were penalized 12 times for 140 yards.  Nevertheless, Hawaii finishes 2018 with its first winning season since 2010.  The Mountain West is now 2-2 in bowls.

A cerebral hemorrhage ends the writing career of respected Idaho Statesman sports columnist Jim Poore.  The talented teddy bear of a guy would last over two years before passing away, but on Christmas Eve he was taken away from the newspaper (and our eyes) forever.  Poore’s humor and lifelong community perspective were unmatched in Boise sportswriting.  You can only imagine what a field day he’d have had with Bronco football the past 20 years.  And with the evolution of Boise’s sports scene.  There’ll never be another like him. 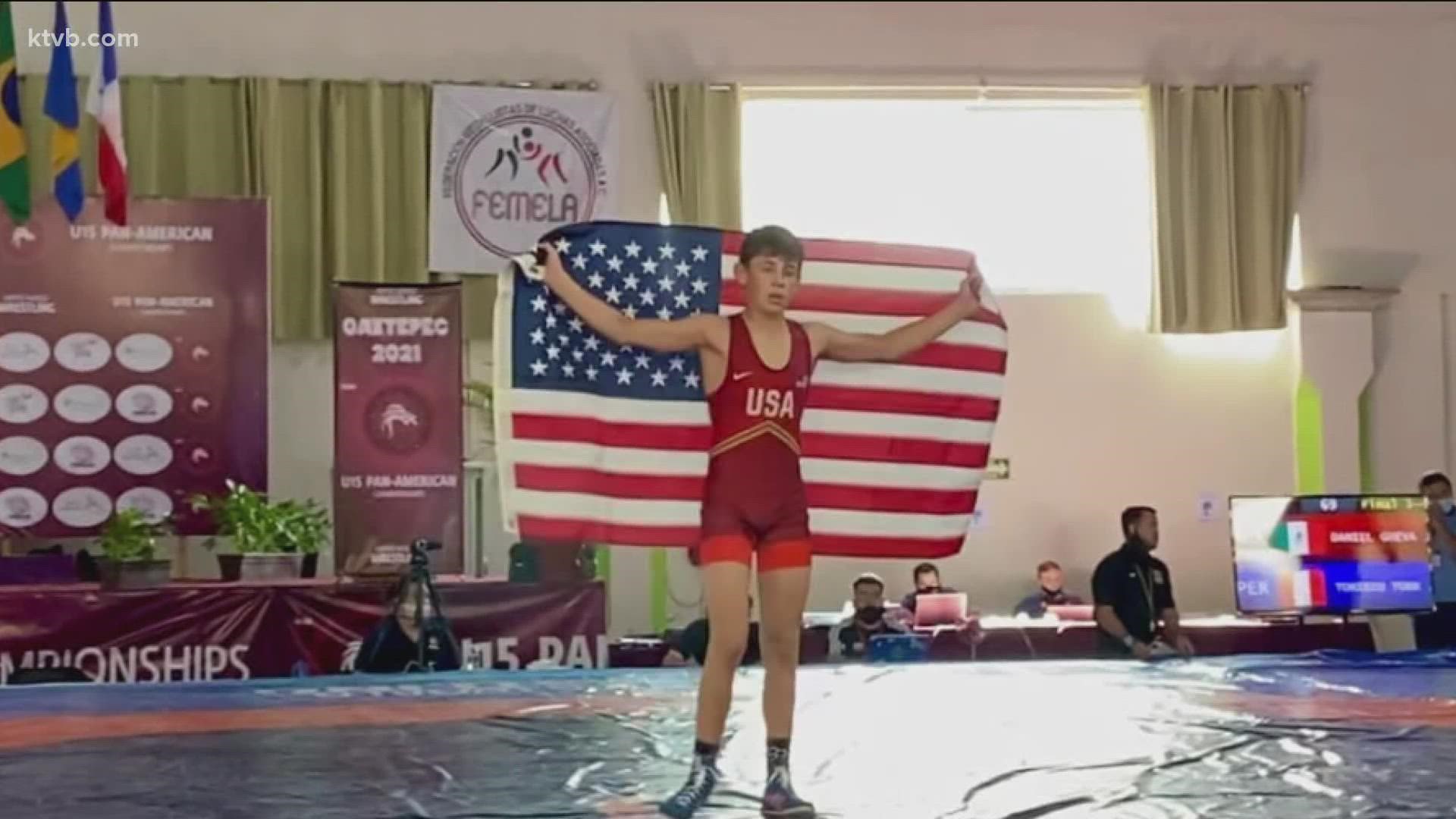