One Bronco Nation Under God is using the hashtag #FamFillsTheBlue to connect ticket donors to those who need tickets. Over 175 tickets have been donated so far. 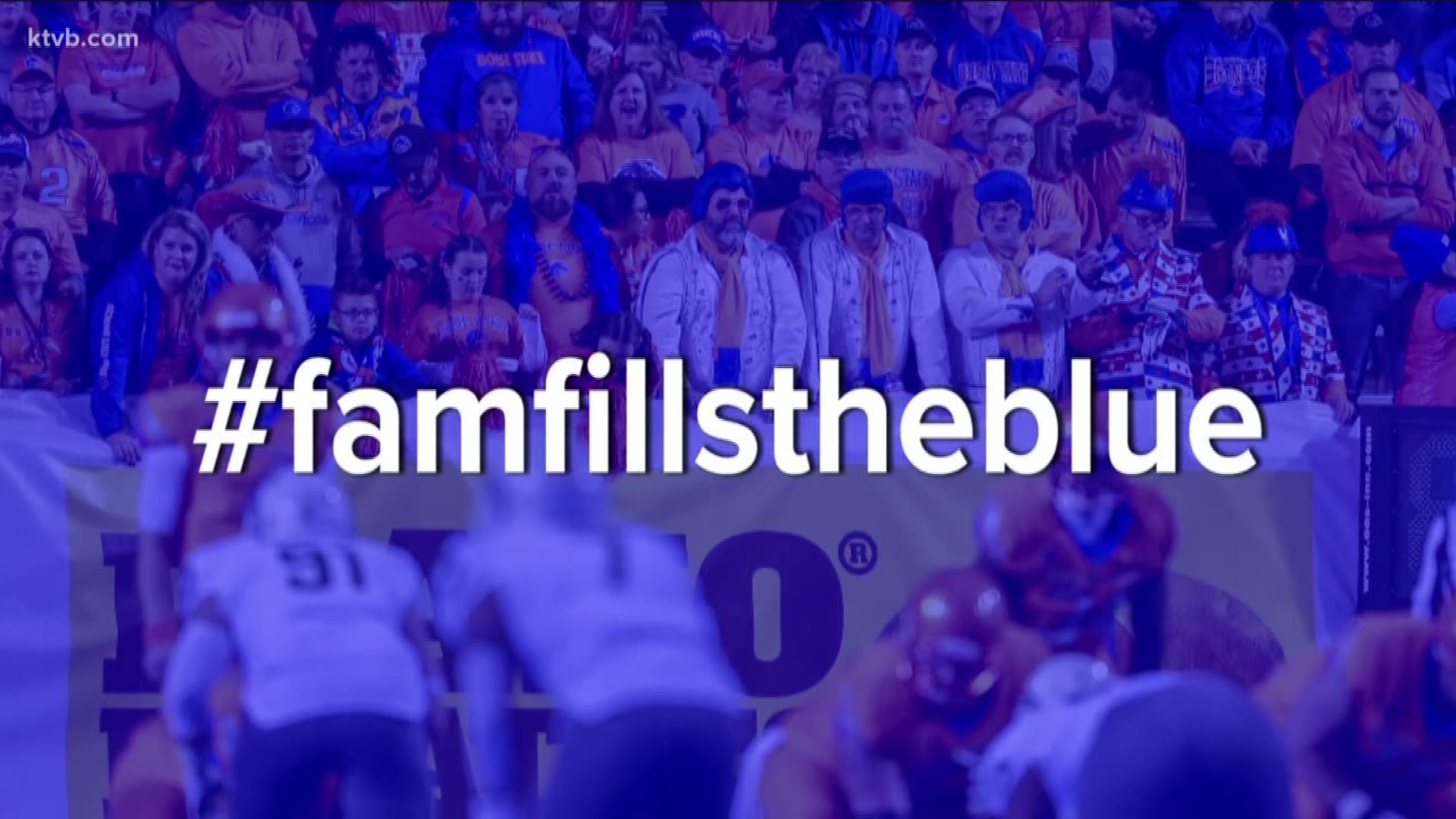 BOISE, Idaho — Boise State officials are hoping to pack Albertsons Stadium on Saturday for the Mountain West Championship Game, and one Boise State fan blog is launching a campaign to help those who can’t afford tickets to have a chance to see the game live at the Blue.

The ultimate goal is to sell out the stadium, which would only increase the Broncos’ chance of winning Saturday’s game. So far over 175 tickets have been donated.

When opponents step inside Albertsons Stadium, you have to imagine there is a certain intimidation factor.

"Best stadium in the country. Best field in the country," said sophomore wide receiver Khalil Shakir. "There's nothing like running out on The Blue. The energy and vibes from the fans and the atmosphere, it's just different."

Dating back to 2000, the Broncos have won 93% of their home games, easily the best mark of any team in the FBS.

"It's electric," said senior defensive tackle Sonatane Lui. "What sold me to come to Boise as a walk-on was hearing the Boise State chant."

"See need the band, you see the horse in front of you, you see the smoke, and when you clear out of the smoke you see all those fans," he added about running out of the tunnel prior to the game. "It really pumps you up and gets you ready for the game."

With the Mountain West Championship game less than 48 hours away, there is a simple reality though, according to Boise State director of athletics Curt Apsey.

"We're not where we want to be ticket wise," Apsey said on Wednesday.

Because it is a Mountain West controlled game, Boise State can't rely on their season-ticket holders to help fill the stadium. The university has to start from zero on their quest to sellout out the Mountain West Championship Game this Saturday.

That is where long-time Boise State fan Drew Roberts is attempting to step in.

"I think that people that are really invested into the program, like us, we take pride in the stadium being loud and full," he said.

Robert has been a Bronco football fan ever since he was a kid. He was at the NCAA DI-AA National Semi-Final in 1994 when Boise State hosted Marshall, and he has only missed a handful of home games since 1999.

Just over a decade ago, Roberts also helped launch a popular fan blog called One Bronco Nation Under God, which is commonly referred to these days as "OBNUG."

"Boise State was at the height of their popularity," recalled Roberts. "The fervor in the valley was probably at its height in 2007, 2008, after the first Fiesta Bowl."

"I think we just wanted to be fans that were writing stuff that other fans would want to digest," he added. "We're the only Mountain West team that has a dedicated blog."

Ever since then, Roberts and his crew of writers have helped manage the pulse of Bronco Nation, often times acting as the life-line between the fans and the team.

Beginning with the first Mountain West Championship game that Boise State played in back in 2014, all the way up to the one the Broncos will host this Saturday, the content creators at OBNUG have noticed a consistent challenge amongst their consumers.

"(Boise State) struggles to sell tickets to the championship game," said Roberts. "We also understand that it's the time of year when people are putting out a lot of expenses. You've got Thanksgiving and Christmas and maybe it's just not in the budget for (some fans)."

"Because Bronco Nation is a tight-knit community," he continued, "every year there's people that have come to us and say, 'hey, how can I give away some tickets? Or, how can I help others enjoy the Bronco experience?'

It wasn't long after that when they came up with a hashtag that would unify their own efforts to help answer those questions.

"One of our writers, Damian Alambra, he kind of helped spearhead this," explained Roberts. "The hashtag is #FamFillsTheBlue. I think it's a way to connect fans that can't go to the game because they are unable - financially or something like that - to people that have tickets but are unable to go or just people that want to donate some extra tickets because they want to see Bronco Stadium filled to the brim.

So far, each request has been reciprocated with a non-so-random act of kindness for this community.

"It's a complete grass-roots thing that people have approached us about. We're just helping to amplify the message out there."

Through Twitter, Facebook or even the message boards on their site -- OB-NUG has provided dozens of fans with an avenue that didn't seem to previously exist, by simply acknowledging the generous efforts of certain people that have the means to provide.

For Roberts, this has served as a reminder of why they initially start this website, and there's hope that the family gathering scheduled for 2 p.m. this Saturday at Albertsons Stadium will continue to grow.

"We're all connected by our love for Bronco Football and Bronco Sports in general, so it's definitely a family," said Roberts.

"If you're somebody that's looking to donate tickets or if you're looking for tickets, contact us. We've got enough people that are monitoring those things that we'll get you in touch with people that can make that happen. And I think in the next couple of days, as it gets closer, there's going to be more of those opportunities arising."