Boise State basketball: All have the Broncos’ attention

With the exception of the No. 7 team in the nation, there’s extraordinary parity in Mountain West men’s basketball this season. 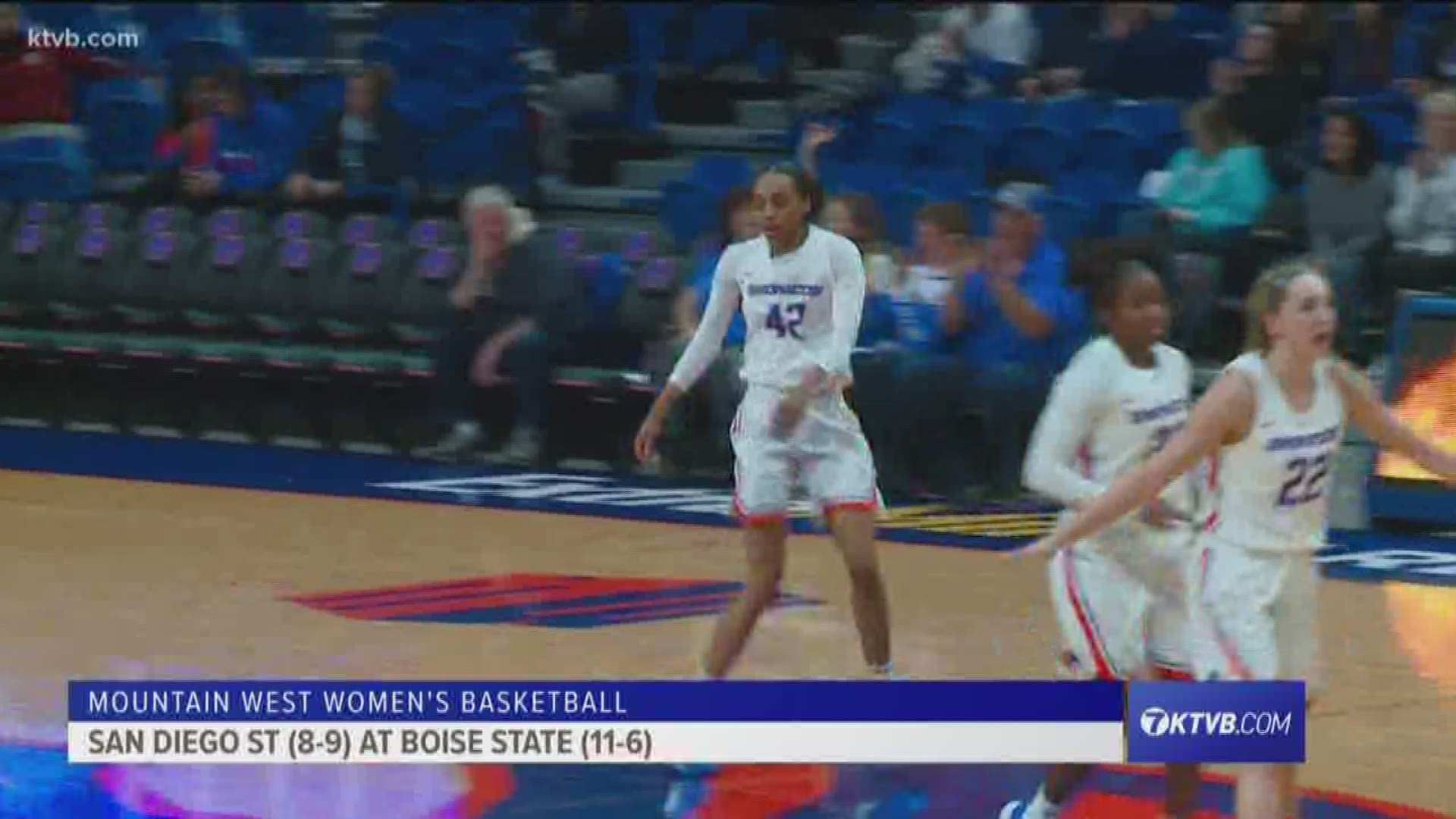 There are no gimmes in the Mountain West this winter.  Exhibit No. 1 (at least as far as Boise State is concerned right now) is Air Force.  That’s who the Broncos face tonight.  The back-cutting, grind-it-out Falcons of old have evolved.  Yes, they opened with an 89-79 upset loss to Idaho State, but they’ve definitely put that behind them (and note the 79 points).  Air Force has lost two of its past three games, but the losses were on the road at Nevada and New Mexico, and the Falcons scored 85 and 78 points respectively.  In between was a dominating 79-60 victory over Utah State.  This evening they’ll try to bring down Boise State and improve to .500.  And with a win, Air Force will trade places with the Broncos in the Mountain West standings.

THE FREEBIES HAVE ADDED UP

Even in its losses, Boise State is drawing fouls and getting to the free throw line this season, and there may be a lot of hoop-driving opportunities at Air Force tonight.  The Broncos are averaging 23 free throw attempts per game, 10th in the country, and making an average of 17, sixth in the nation.  The accuracy at the charity stripe, 74 percent, is not as high at No. 59, but that’s still a pretty good spot among the 350 Division I teams.  Boise State has outshot and outscored its opponents at the free throw line in 15 of 18 games this season (San Diego State was not one of them).  Derrick Alston and RJ Williams have each been to the free throw line at least 100 times this season, the only pair of teammates in the country who can say that.

THE COACHES POLL FLIPS IT

Followup on the final college football rankings—the Coaches Poll reverses the order we saw in AP.  It’s Boise State at No. 22 and Air Force at No. 23.  That one checks all the boxes: the Broncos beat the Academy in September, they won the Mountain West championship while going undefeated in conference play, and they had a better record, 12-2 to 11-2.  But the big picture from a Boise State standpoint is long-term sustainability.  This is the third straight year the Broncos have finished the season in the Top 25, and the 13th time in the past 18 years they’ve done it.

There’s a name change this year for college football’s second-most high-profile all-star game.  It’s now called the East-West Shrine “Bowl” instead of “Game,” and it’s coming up Saturday in St. Petersburg, FL.  Now-former Boise State star John Hightower is on the West roster.  Don’t forget kickoff returns when you try to read the minds of NFL scouts.  Hightower was not only a second-team All-Mountain West wide receiver, he was also a second-teamer as a kick returner.  He averaged 24.6 yards per runback as a senior and peeled off an 88-yard touchdown against Portland State.  Hightower also had a 100-yarder called back by a holding penalty at UNLV.  There aren’t many kickoff returns in the NFL anymore, but Hightower can still provide a game-breaking skill.

HUTCHISON IS LACING ‘EM UP AGAIN

Chandler Hutchison’s minutes are slowly increasing for Chicago as he tries to get back in a groove after missing all of December with a shoulder injury.  The former Boise State star played 14 minutes in the Bulls’ 113-101 loss at Boston Monday night.  Hutchison went 1-for-5 from the field and only scored two points, but he did have three rebounds, two blocks and a steal.  It was his fifth game back since the injury—and the most minutes he’s played in that stretch.  Hutchison has appeared in just 13 of Chicago’s 41 games this season.  The Bulls host the Washington Wizards tonight.  By the way, it was two years ago Monday that he broke the Broncos’ single-game scoring record with 44 points against San Diego State.

The Idaho Steelheads visited the transaction wire Tuesday and came away with forward Colby McAuley from the Orlando Solar Bears as part of a three-team trade.  Connor Bleackley, who just logged a multiple-goal game for the Steelheads in a win last Friday at Fort Wayne, heads to the Maine Mariners.  The Steelies also have Anthony Nellis back from an AHL callup with the Texas Stars, and they have a new backup goalie in Jake Kupsky, who moves up from Pensacola of the SPHL.  Idaho opens a three-game series tonight against Tulsa in CenturyLink Arena.

A FORMER HAWK WITH STAYING POWER

Boise Hawks alum Josh Donaldson still has some expensive tread on his tires.  Donaldson, the 2015 American League MVP who had muddled through a few injury-riddled seasons since, got it going again last year when he hit 37 home runs and knocked in 94 runs for Atlanta.  He cashed in Tuesday with a four-year, $92 million contract with Minnesota.  Donaldson was a Hawks mainstay in 2007, when he batted .346 with nine homers and 35 RBI.  He joins another former Hawk, lefthander Rich Hill, as a free-agent signee with the Twins.  Hill agreed to a one-year deal on New Year’s Eve.

BACK TO THE HARDWOOD

It’s hard to fathom that the Boise State women won’t come away with a win tonight in ExtraMile Arena.  The Broncos host Air Force, a team they’ve beaten 12 consecutive times.  Boise State is 17-1 all-time against the Falcons and has won 17 consecutive home games against Mountain West opponents.  In Caldwell, the College of Idaho men renew their I-84 rivalry with Eastern Oregon tonight.  The Yotes have won nine games in a row, the fifth straight season they’ve put together a winning streak of eight games or more

The Dallas Doomsday Defense forces eight turnovers as the Cowboys defeat the Denver Broncos and former Dallas quarterback Craig Morton, 27-10, in Super Bowl XII.  The Broncos’ Orange Crush spent way too much time on the field, and Roger Staubach and company cashed in enough to win.  It was the Cowboys’ second Super Bowl championship under coach Tom Landry.  Do you remember who was coaching Denver at the time?  It was Red Miller.