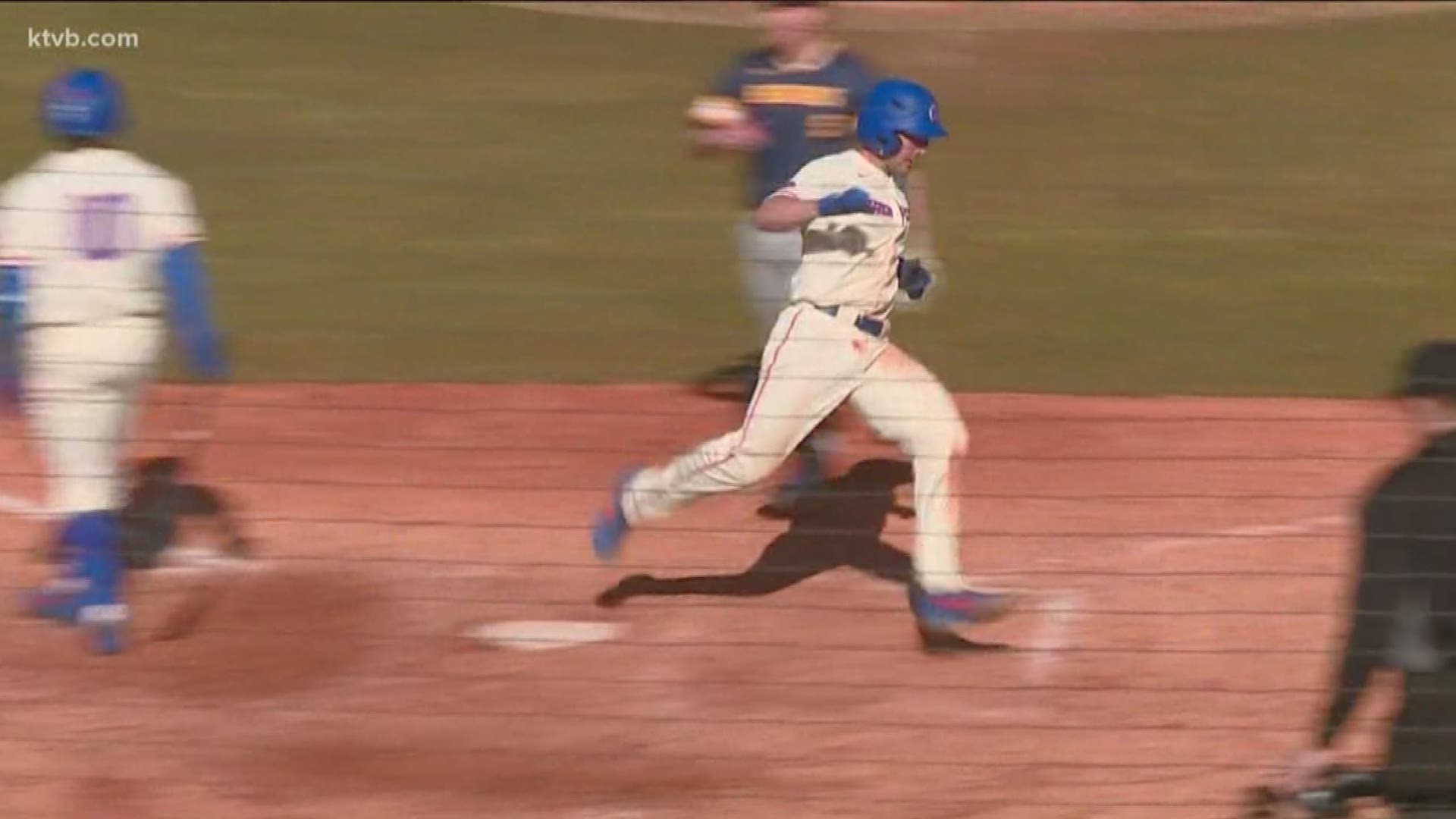 BOISE, Idaho — Boise State eliminated it's baseball program back on July 2 and in doing so, they became the third university to cut their baseball program in the last two months, joining the likes of Furman University and Bowling Green State University.

So far, Bowling Green is the lone program that found a way back. Falcons head coach Kyle Hallock credits alumni support and the willingness of his university to listen.

The private fundraising group, which also includes funds raised by the recently eliminated swimming and diving program at Boise State, says they've raised over $500,000 so far. Van Tol has also worked with the Boise Hawks to further drop facility fees.

When is comes to Boise State, should the Bowling Green situation provide hope? Or are there too many differences?

Both Gary Van Tol and Kyle Hallock said they made cuts to their budgets at the request of their athletic departments before their programs were eliminated altogether.

Specifically, Van Tol told KTVB he was asked to cut 12% of his budget. At that point in time, he cut 21% of it and planned to bus to places like Arizona State and San Diego State in 2021 to reduce travel costs.

Bowling Green Baseball just completed its 105th season. They benefit from an alumni group that includes over 100 Major League Baseball draftees, 17 of which made it all the way to the MLB. Former Los Angeles Dodgers great Orel Hershiser is included in that group, as is utility man Jon Berti, who is currently on the Miami Marlins active roster.

Meanwhile, Boise State baseball hasn't added to its alumni base in over 40 years. The program was initially cut back in 1980, so the Broncos don't have any type of recent professional talent they can lean on.

Maybe the biggest difference though is the presence of dialogue between the respective programs and their universities.

Even after Bowling Green cut their baseball program, they were given a financial target to hit in order to save it. That goal: $1.5 million over three years.

On the other hand, Boise State hasn’t presented their former baseball program with any financial benchmarks, instead of maintaining that the decision is final and nothing can be said to change the mind of director of athletics Curt Aspey, according to multiple sources. Apsey has also made it clear that the university doesn’t believe a self-funded program is sustainable.

Finally, Bowling Green has an on-campus baseball stadium. The proposed stadium that the Boise State baseball team was supposed to receive when the program was reinstated back in 2017 never got off the ground.

Recently, KTVB Sports Director Jay Tust caught up with Hallock to find out more about how the Bowling Green baseball program was saved.

'They gave us a shot'

JAY: Kyle, on May 15, you received the news that the Bowling Green baseball program was being cut. How much dialogue was there [with the university] before that decision was made? And how surprising was it for you, your fellow coaches and your players?

KYLE: There were conversations within our athletic department, with all the coaches, and there was reality of, there could be cuts. Specifically why, who and when, we didn't really know, but we knew those were those are always an option with everything that's going on in the world. So, our fingers were crossed it wasn't us. It became us and your worst nightmares become your reality. Little did we know, as that's happening, our alumni went to work. They went to absolutely work. Five days later, 40 or so alumni drove from all over the country to support us, and they said, 'Hey, we're going to help you guys. We're gonna try and bring this back.' And thankfully, our administration was supportive of that. They gave us a shot.

JAY: I know that every university, every athletic department is built different, and has different influences. At Boise State, they've been told that there's nothing they can do to save the program, but they push on with their fundraising efforts. How does that approach compare to what you were dealing with? Were you guys given any hope at all after the program was cut?

KYLE: From my standpoint, our initial thought process was, we didn't know that it was going to be an option. Until our alumni started setting the tone for this 'Save BGSU Baseball Campaign.' And as the news got around and word of mouth traveled that this was happening, our administration did not say no. BGSU Baseball is not possible without the support of our administration, and we're here because they allow this to happen.

JAY: When you compare your alumni base to Boise State, it looks very different. Boise State has played 14 games in the last 40 years. You give thanks to your administration, but also, would Bowling Green Baseball exist if you didn't have that type of alumni base?

KYLE: We just finished Year No. 105. I believe [we've had] 17 big leaguers, over 100 draft picks. Everyone came together for this logo right here. And we all went to work, and we were given direct objectives, and everyone's just doing their job at an absolute high level.

JAY: So the program gets cut on May 15, and it gets reinstated on June 2, how many players do you think that you lost in that window? And how much talent was left behind?

KYLE: We ended up losing eight guys. We retained 27, including our incoming freshmen. I would say the best thing that we forget about, is that when we hit that first team meeting, we know everyone in that team meeting wants to be at BGSU. And that's a powerful tool. That is something special and unique to our situation.

JAY: Were you guys at all given a financial target that you had to hit? Did you discuss donation sustainability, anything like that? And what were the funds that you ended up raising?

KYLE: Originally it was $3.5 million for over five years. And where we saw hope and positive feedback was when the administration said three years, $1.5 million. When they came back with that, that was a huge, huge deal. They valued and appreciated the effort.

JAY: Obviously Bowling Green is a long ways away from Boise, Idaho, but were you hearing any buzz at all about the Boise State baseball team despite the fact they only played 14 games?

KYLE: Oh yeah. Yeah, we had heard the type of players they were recruiting, and we knew that once Gary [Van Tol] was hired, and he filled the staff, we were like, 'Okay, that's a high achiever.' And then we saw the plans for the stadium and we're sitting here like, 'Man, do you think they'll turf it blue like the football program?' We kept our eyes on it just because we figured with everything we saw read from the baseball world websites, that program is going to come back the right way and at a high level.

RELATED: 'I want to fight for it': Boise State baseball commit joins players and coaches in effort to save the program

RELATED: 'I think we can bring the program back': Boise State baseball player discusses efforts to save the team

RELATED: Hours after arriving in Boise, Boise State baseball commit was told the program was eliminated