Protecting the blue is still paramount

Regardless of how many people are in the stands surrounding it Saturday, Boise State considers the blue turf hallowed ground, where losses are unthinkable.

Regardless of how many people are in the stands surrounding it Saturday, Boise State considers the blue turf hallowed ground, where losses are unthinkable. Troy tries for a breakthrough at a place where the Broncos have gone 110-6 since 1999, the best home record in the country. Those back-to-back losses to New Mexico and Air Force in 2015 are still painfully fresh, but Boise State was unbeaten at home last season. Here’s another angle to think about. The Broncos have not lost a non-conference home game since 2005, when Boston College won what is now the Famous Idaho Potato Bowl. The last regular-season non-conference defeat came in 2001 in Washington State’s 41-20 triumph.

You’ve heard it a lot—Troy is coming off a 10-3 season and a victory over Ohio in the Dollar General Bowl. The next leap for the program would be taking down a perennial Group of 5 power. Last November, the Trojans became the first team in Sun Belt history to earn a spot in the AP Top 25 when they landed at No. 25 after starting the season 8-1. Now the challenge is to sustain success, because this 10-win stuff is new to them. In fact, winning seasons are, too. Troy was 4-8 in 2015, magnifying the great job coach Neal Brown is doing in building this program. The Trojans had a nice run under longtime coach Larry Blakeney 10 years ago but hadn’t had a winning campaign since 2010 until last year.

The first time Bronco Nation saw wide receiver A.J. Richardson was in the 2015 Spring Game, when he caught seven passes from an 18-year-old Brett Rypien, the backup to Ryan Finley at the time. Once Rypien became the starter that fall, he eventually found Richardson, who had all 10 of his receptions in the second half of the season. But Richardson logged only two grabs last year, and neither came from Rypien. The pair is going to have to connect a lot now that a starting lineup torch has been passed to Richardson. The third wideout, Sean Modster, has looked the part on occasion the past two years. Half of his catches in 2016 came in one game, when he pulled in four receptions for 82 yards against BYU. Multiply that by 13 this year, and you’d have 52 grabs for 1,066 yards. That would be just dandy. 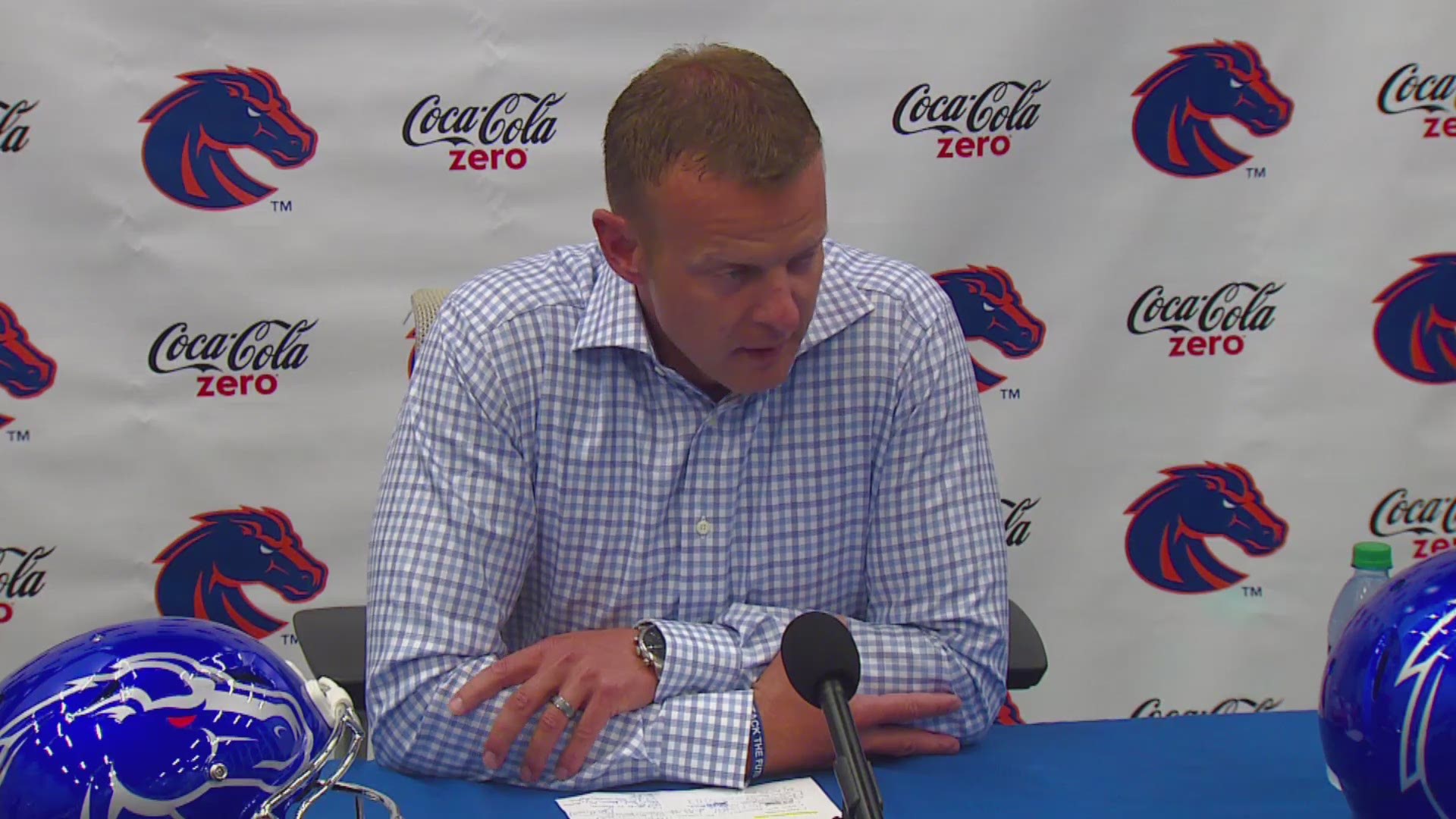 Four Mountain West teams face Power 5 schools this week, and seven take on FCS opponents in home games. Easily the most interesting matchup versus the FCS (here, anyway) is UC Davis at San Diego State. This is a tough way for former Boise State coach Dan Hawkins to start his stint at his alma mater—dealing with the two-time defending Mountain West champion. Hawkins knows what Rocky Long’s defense will bring. “He’s just going to try to storm the castle and cause disruption and not let you beat them over the top,” said Hawkins on San Francisco’s KNBR. The Aggies have had six straight losing seasons. That’s why Coach Hawk is there. We learned long ago not to put anything past him.

Idaho takes a six-game winning streak into tonight’s season opener against Sacramento State in the Kibbie Dome. The capper, of course, was the explosive 61-50 win over Colorado State in the Famous Idaho Potato Bowl. Tonight, the Vandals look for a good omen for 2017. They got one last year, winning on Opening Night to break a streak of five straight losses to start the season. On offense, Idaho will seek balance to help open things up for quarterback Matt Linehan, with running backs Aaron Duckworth and Isaiah Saunders both returning. It’ll be interesting to see how those numbers shake out. Sac State returns all 11 starters on defense this year, but what does that really mean? The Hornets were 2-9 last season.

Kellen Moore’s preseason report card will have to be based on four preseason games, because the fifth is not going to be played. Due to the tragedy that continues to unfold in Houston, the NFL thought better of going forward with tonight’s preseason finale between Texans and Cowboys in Arlington. Moore’s numbers this summer do not stack up to those of rookie quarterback Cooper Rush, who has clearly leapfrogged the former Boise State great into the Cowboys’ No. 2 spot behind Dak Prescott. But you can’t put a price tag on the value of Kellen’s vaunted football IQ, and Dallas owner Jerry Jones said during a radio appearance this week that it is "very likely" the team will carry three quarterbacks on their 53-man roster.

Graham DeLaet’s troublesome back isn’t bad enough at the moment to keep him out of the Dell Technologies Championship. After all, it’s the second leg of the FedExCup Playoffs, and there’s a lot at stake. The field includes the top 100 in the FedExCup standings, and the top 70 at the end of this tournament will advance next week. DeLaet is currently No. 74, so he needs to at least make the cut at TPC Boston. The former Boise State standout teed off at 6:15 our time this morning—in the first group off the No. 10 tee with Bubba Watson and Adam Scott.

The Boise Hawks’ Western Idaho Fair roadtrip ended on a sour note yesterday in Vancouver, where the Canadians posted a 5-2 win in an afternoon matinee. It was the Hawks’ 38th loss of the year, so they’ll have to sweep their final three games in order to avoid a third straight losing season. The Hawks have the day off—one last chance to enjoy Boise. They open a three-game series against Hillsboro tomorrow night at Memorial Stadium, and then they’re gone.

Playing its fourth straight season opener against a ranked team on national TV, Boise State loses the first game of the post-Kellen Moore era, 17-13, at Michigan State. The Broncos stayed in the game with a fumble recovery and three interceptions, one of them returned 43 yards for a touchdown by Jeremy Ioane. But Spartans tailback Le’Veon Bell rushed for 210 yards, and Boise State rushed for only 37 as a team. The Bronco offense was held without a touchdown for the first time in 15 years.