Boise State football: A fact not to forget

Boise State’s win at San Jose State pushed the Broncos past a familiar threshold. It’s one that’s recognized every year, and it should be. 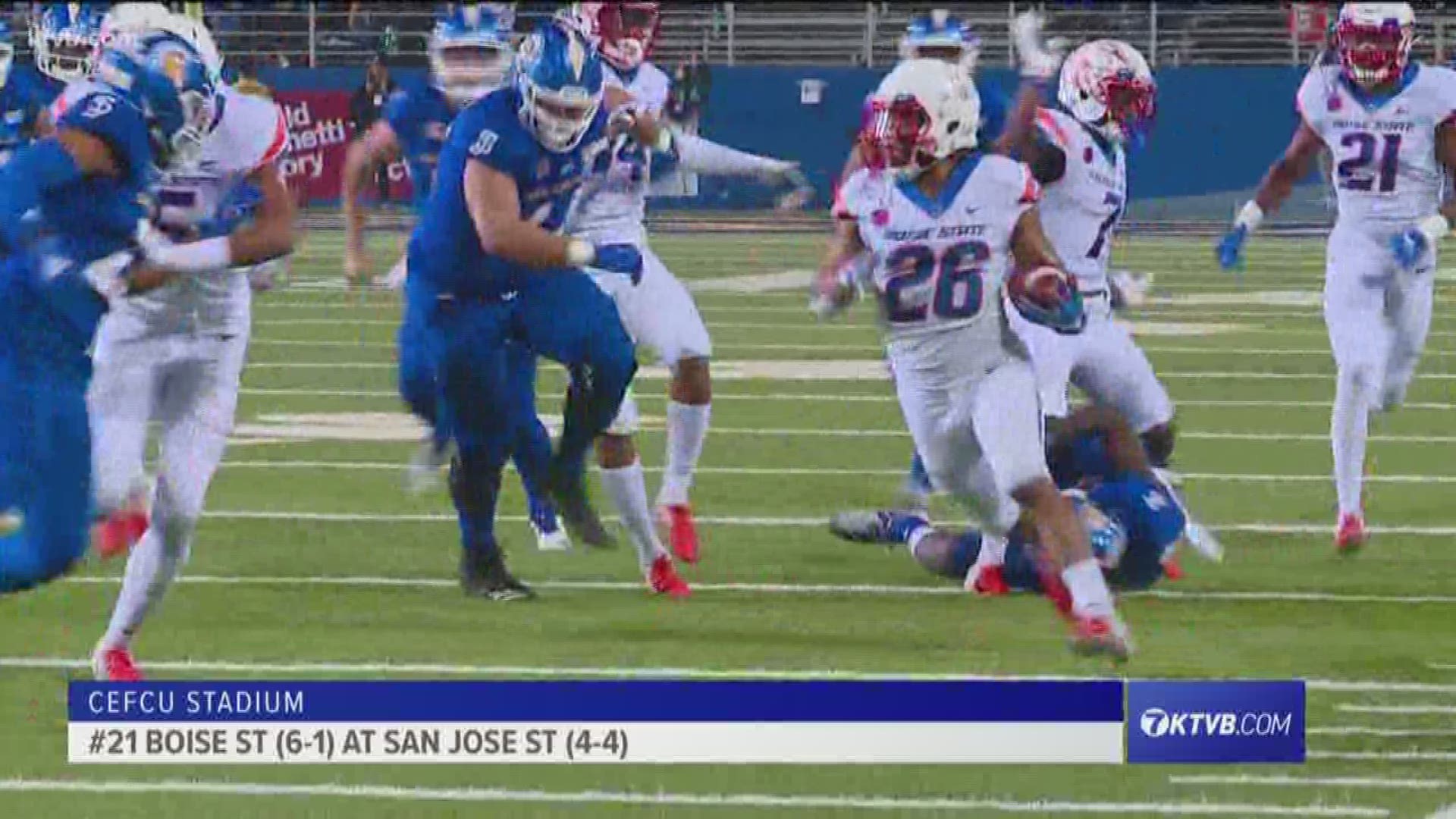 Before going into the idiosyncrasies of Boise State’s 52-42 comeback win at San Jose State, let's look at the Broncos’ ever-underappreciated big picture.  Saturday night they clinched another winning season, their 22nd straight—the longest streak in the FBS.  Maybe you’re saying, “Hey, what if they go 7-7?”  If Boise State loses the next four, there won't be any Mountain West championship game, so the worst they can do is 7-6.  Which isn’t going to happen.  Anyway, here's the deal.  This is the Broncos' 52nd season as a four-year program, and they've had 46 winning seasons.  There have been just five losing campaigns, plus one at .500.  Think about that.  By the way, Bryan Harsin has tied Jim Criner for third on Boise State’s career wins list with his 59th victory.

You’re supposed to be able to run on San Jose State, right?  Well, Boise State didn't test that early.  On the Broncos' first six snaps they called pass plays.  And by halftime, they had 17 yards on the ground, with George Holani netting only 21 yards on eight carries.  But Holani went off after the intermission, controlling the tempo with 105 yards and three of his four touchdowns.  As a team, the Broncos ran for 236 yards after halftime.  Call it a delay of game plan.  Holani not only has some shake-and-bake, he is a physical, physical runner.  Who says Boise State won't have a 1,000-yard rusher this year?  Holani has 589 yards for the season, with five or six games to go.  It can still happen.

SAVING THE BRONCOS’ (AND HIS) DAY

It was a tough night for Boise State cornerback Avery Williams, starting with three pass interference penalties.  Williams and his defensive mates allowed the most yards thrown by a Mountain West quarterback this season, the 438 from the Spartans’ Josh Love (a legit candidate now for first-team All-Mountain West).  But if it wasn’t for Williams, Boise State might not be 7-1 right now.  The team was in a total funk near the end of the first quarter when Williams contributed the way he originally did as a Bronco on the first touch of the 2017 season.  His 66-yard punt return got Boise State on the board when it trailed 14-0 and was being turned inside out by Love and his receivers.  That settled the Broncos down, and they started to snap out of it, marching 70 yards for a TD on their next possession.

SHIFTS IN THE GROUP OF 5

SMU lost to Memphis 54-48 Saturday night, and Appalachian State fell to Georgia Southern last Thursday.  So, despite remaining at No. 21 in both the AP and Coaches Polls, Boise State is now ahead of those two teams.  Cincinnati, which had an experience much like the Broncos did at San Jose State, having to kick a field goal to win 46-43 on the last play of the game at East Carolina, is now tops in the Group of 5 race at No. 17.  But did I mention Memphis?  The Tigers jumped Boise State and is No.  19 in both polls.  The first College Football Playoff rankings will be released Tuesday night, and it’ll be fascinating to see how much they differ from the traditional polls.

Cal Poly was the team with the penchant for running the rock going into Saturday’s game against Idaho in Moscow.  Instead, the Vandals turned the tables both offensively and defensively in a 21-9 Big Sky victory.  Cal Poly’s triple-option was held to 145 yards rushing and 242 total, while Idaho racked up 244 yards on the ground, 179 of them from Aundre Carter.   The redshirt freshman had a monster game, averaging 7.8 yards per carry and scoring two touchdowns.  Defensively, Christian Elliss and Tre Walker gobbled up the Mustangs with 13 and 11 tackles, respectively.  Unfortunately, there was no carryover in the stands from the big win over Idaho State two weeks ago.  Only 6,424 fans showed up in the Kibbie Dome.

HARD TO GO UNDEFEATED (BUT THE YOTES STILL ARE)

College of Idaho has gone from Cinderella to the team that gets everybody’s best shot in one year’s time.  Eastern Oregon gave the Coyotes everything they could handle, but the Yotes emerged with a 24-17 victory on Saturday, their 14th straight to tie a school record set 66 years ago.  They also clinched a share of the Frontier Conference championship.  C of I trailed 14-7 at halftime but took control in the second half by holding the ball for more than 20 minutes.  The run game has to work for that to happen, and Nick Calzaretta got the majority of his 125 rushing yards after halftime.  On his final carry of the day, Calzaretta hit 1,000 yards for the season on the button.

LVE MAY HAVE TO SIT

The Dallas Cowboys have had a bye week plus one day to get ready to play the New York Giants on Monday Night Football, but that may not have been quite enough for Leighton Vander Esch.  The Cowboys say the former Boise State star will be a gametime decision for tonight’s contest at MetLife Stadium after suffering a neck stinger in the win over Philadelphia two weeks ago.  The injury is not considered major.  If Vander Esch doesn’t play tonight, it’ll be the first game he’s missed in his young NFL career.

After losing their first game in regulation this season in a 5-4 decision Friday night in CenturyLink Arena, the Idaho Steelheads swept a pair from the same Utah Grizzlies in West Valley City.  Trailing 2-1 Saturday night, the Steelheads got a goal from Zach Andrusiak with 15 minutes left in the third period to knot things up.  Then Andrusiak struck in overtime to give the Steelies a 3-2 win.  Sunday saw Will Merchant score midway through the second period, and that was it in a 1-0 Idaho win.  Tomas Sholl served up a 25-save shutout, the eighth of his career.  The Steelheads are now 7-1-2.

The season starts for real Tuesday night for Boise State basketball with a rare doubleheader in ExtraMile Arena.  The Bronco women tip things off against Lewis-Clark State, followed by the men versus Life Pacific.  The women looked very much in tune Saturday afternoon with a 79-39 exhibition rout of Concordia.  The Broncos held the Cavaliers without a field goal in the third quarter while outscoring them 25-2.  In soccer, the Boise State women were upset by Utah State 1-0 Friday but still won a share of the Mountain West regular season championship when San Diego State lost later that evening.  The conference tournament opens Tuesday at the Boas Complex.  The Broncos have a first-round bye and will play Thursday.

Adrian Peterson, the rookie out of Oklahoma, sets a new NFL single-game rushing record with 296 yards in Minnesota’s 35-17 win over San Diego.  After a modest 43 yards at halftime, Peterson exploded for 253 in the second half.  He averaged almost 9.9 yards a carry for the game.  Just a little over 10 months earlier, Peterson had been held to 77 yards on 20 carries by Boise State in the Fiesta Bowl—only 52 yards in regulation before his 25-yard touchdown run in overtime.