Expectations for the Boise State lines going into the UCF game were improvement on the offensive side and dominance on the defensive side. Neither came to pass. 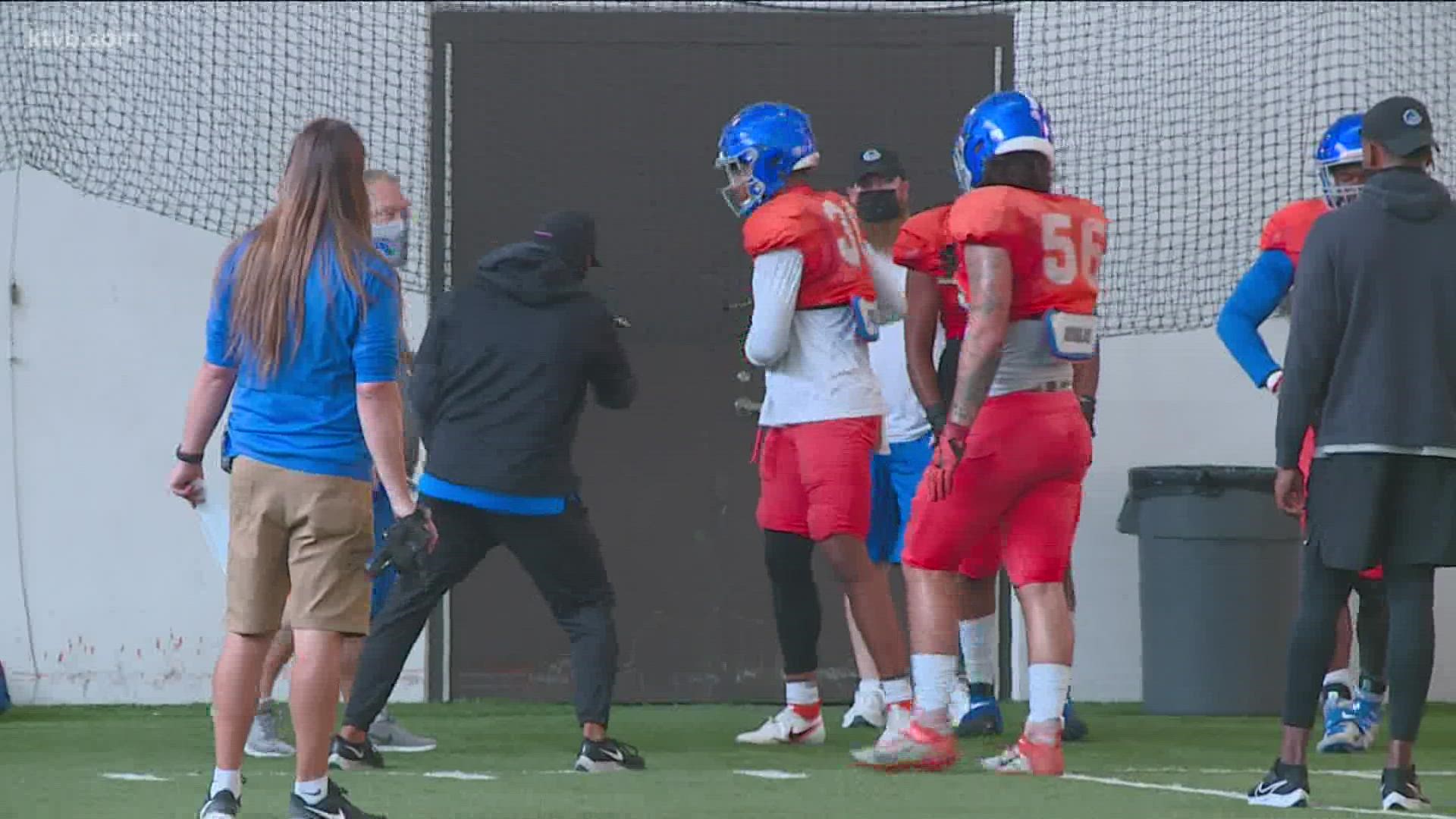 The theory goes that Boise State’s running game would be fine with George Holani in the lineup. And that might be true. But if we don’t find that out anytime soon, where do the Broncos go from here? With Cyrus Habibi-Likio and Andrew Van Buren stifled at UCF last Thursday, the coaching staff didn’t have enough confidence in any other running back to give him a try. Heck, it doesn’t look like Tyler was even in Orlando—he didn’t play, not even on special teams. If UTEP’s mantra is “stop the run” this Friday night, who’s to say the Miners can’t do it and send the house after Hank Bachmeier?

This is going to top the list of facets to watch in the home opener on blue turf. If a team’s biggest improvement comes between Week 1 and Week 2, as coaches like to say, is it even possible in the running game without Holani? Does the Boise State offensive line fall off a cliff when Jake Stetz is out?

SIMILAR DEAL WITH THE ‘D’

The pressure is on for the other trench right now as well. What we saw from the Boise State defensive line in the Bounce House was not what anyone expected. “Stop the run” was indeed the Boise State defensive mantra, but UCF had that now-familiar 255 yards on the ground. “It’s the basic fundamentals that we’ve got to go back to and sharpen up,” said coach Andy Avalos on Sunday. But it’s only natural to wonder about the mix of personnel up front. There are no changes on this week’s depth chart. Jackson Cravens started at nose tackle in place of Scale Igiehon in Orlando because the latter was “limited,” but there’s still an “OR” between the two on the two-deep. Scott Matlock arguably played the best among the D-linemen, recording five tackles and a sack. But Matlock was not the dominating force he was expected to be.

Word from Boise State is that wide receiver Khalil Shakir is a full-go for the UTEP after being on a “snap count” at UCF. Shakir certainly made the most of those snaps, pulling in five catches for 91 yards and two touchdowns, showing all of the shake-and-bake and dodge-and-weave skills that have made him one of the Broncos’ most popular players. But if there was one position that showcased “dependable depth” in the game, it was wideout. Bachmeier’s first nine completions went to nine different players, five of them wide receivers (CT Thomas, Octavius Evans, Shakir, Stefan Cobbs and Billy Bowens). Thomas had just the one reception on the night, but he now has a catch in 38 straight games, the second-longest active streak in FBS.

BRONCOS HANG IN AT USA TODAY

USA Today’s weekly “NCAA Re-Rank” shuffled the 130 FBS teams on Tuesday, and it was interesting. Boise State dropped only six spots—from No. 23 to No. 29—on the new list after its loss at UCF. The Knights rose from No. 21 to No. 14. But there wasn’t that much movement overall. Nevada was up four spots after beating Cal and is now the Mountain West’s top-ranked team at No. 26. This Friday’s Broncos opponent, UTEP, is 2-0 but is still down at No. 116. The Miners’ victories have been over their ever-struggling rival, New Mexico State, and FCS Bethune-Cookman. (You may have noticed that the Aggies led San Diego State 10-0 at halftime last Saturday night before falling 28-10.)

BENGALS TO THE SCENE OF THE UPSET

Idaho State is catching Nevada at a bad time. Not only do the Bengals face reigning Big Sky Offensive Player of the Week Carson Strong Saturday in Reno, they meet a Wolf Pack team that is going to be relentlessly reminded of a game in 2017. That was a stunning 30-28 ISU win at Mackay Stadium, the Bengals’ first over an FBS team in 17 years. At quarterback, the Pack started Kaymen Cureton, who is now at MSU-Northern. Strong is a different animal, a projected NFL first-round draft pick. And Idaho State is coming off a 35-14 defeat to North Dakota in Holt Arena that saw QB Tyler Vander Waal complete only 19 of 43 passes and throw three interceptions. Prospects are not pretty for the visitors this week.

Training camp will be critical for Chandler Hutchison a month from now. The former Boise State star, who was traded this summer from Washington to San Antonio, is on the move yet again. Hutchison was released by the Spurs over the weekend without having even practiced with the team and has now signed with the Phoenix Suns. He began his career in Chicago after going to the Bulls in the first round of the 2018 NBA Draft, but he has not been able to take root, and injuries have not helped. Hutchison is averaging 5.7 points and 3.8 rebounds in 97 career NBA games.

THE ATTRACTION OF IDAHO HOME ICE

Forward Colby McAuley is the latest to rejoin the Idaho Steelheads after biding his time elsewhere during the team’s hiatus from hockey last season. McAuley has signed for the 2021-22 campaign after playing 20 games with the ECHL’s Allen Americans last season. “I love the guys, I love the atmosphere that the fans have—best in the ECHL by far—and it’s a great city that reminds me of home,” said McAuley, who hails from Sherwood Park, Alberta. A.J. White, Zach Andrusiak, Evan Wardley and Jake Kuspsky were also in Steelheads sweaters two seasons ago, sampled other teams last season, and elected to come back. Then’s there’s Will Merchant, who only wanted to play for the Steelies and sat out last season while working in Boise.

Pete Sampras wins his 14th Grand Slam singles title, beating Andre Agassi in four sets in the U.S. Open final. It was the final Slam crown in Sampras’ career, during which he finished the year as the No. 1 player in the world six consecutive times. He was especially dominant at Wimbledon, winning at the All England Lawn Tennis & Croquet Club seven times. Sampras is fourth in career men’s tennis Grand Slam championships behind current icons Novak Djokovic, Roger Federer and Rafael Nadal.