Boise State coach Andy Avalos faces this for the second time as a head coach: how to rally the troops after a disappointing loss. 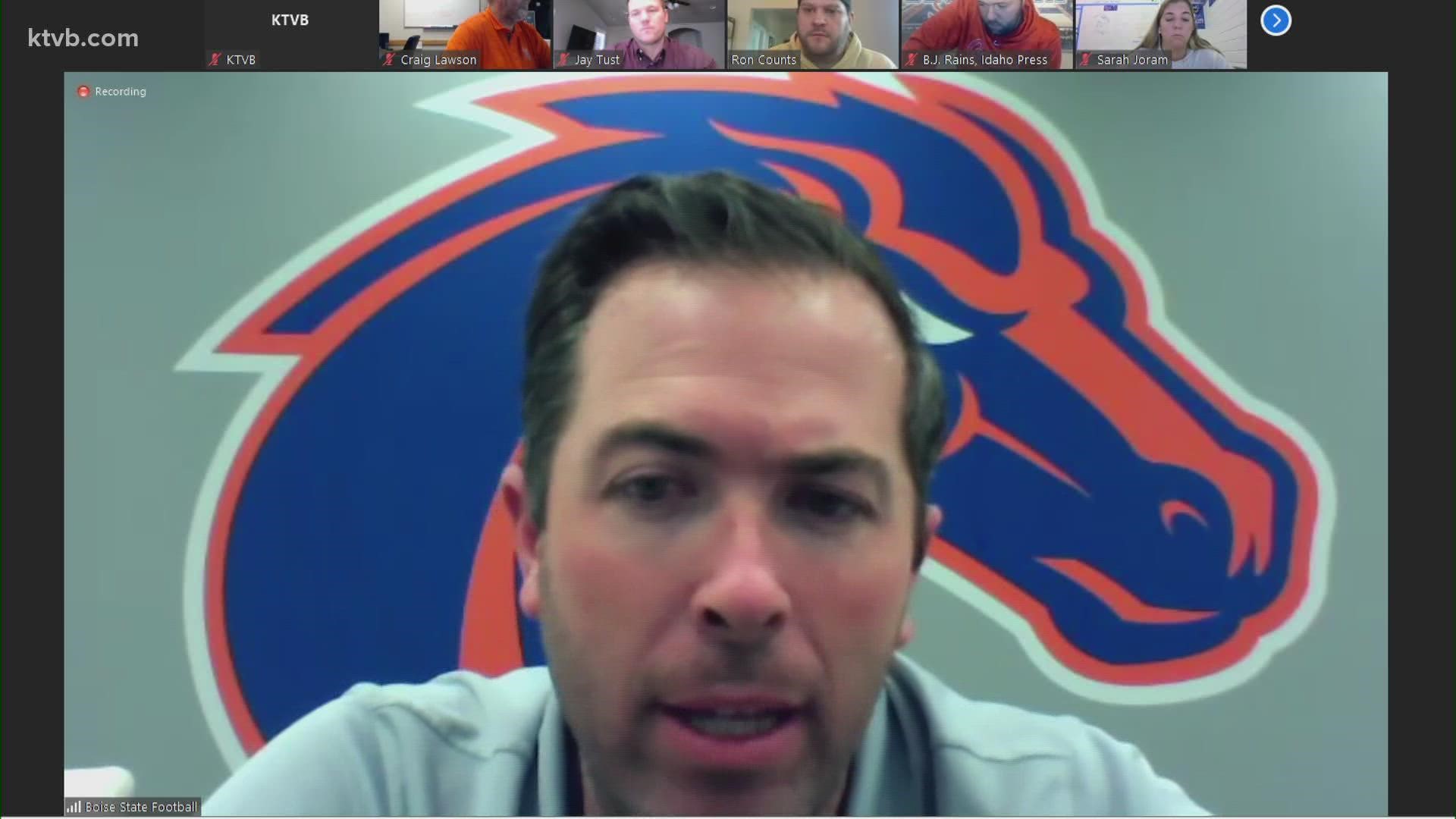 It’s just the first game of the Mountain West schedule, so you hesitate to call Boise State’s game at Utah State “must-win.” But what if the Broncos lose in Logan and fall to 1-3 for the first time in 24 years? Coach Andy Avalos obviously isn’t thinking that way. “We understand what the process is here,” said Avalos in his Monday press conference. “And we’re all about meeting that standard each and every day.” The standards that aren’t being met are rushing offense and rushing defense, and the staff is constantly evaluating that issue. “What are the things we do best in the run game?” Avalos said. “What can we do best without personnel?” That’s tricky.

When asked about the “dependable depth” he stressed last spring as it applies to the offensive and defensive lines, Avalos admitted, “That’s where we are the thinnest.” But, he added, “We’re excited about what we’re doing behind the scenes.” Through it all, Boise State was rotating two sets of defensive linemen at times well into the second half during the loss to Oklahoma State, sending Isaiah Bagnah, Divine Obichere, Michael Callahan and Aisa Kelemete in for Demitri Washington, Jackson Cravens, Scott Matlock and Shane Irwin. After ripping the Broncos for 168 first-half rushing yards, the Cowboys netted only 78 on 35 carries after halftime (2.2 yards per carry).

JUST A THOUGHT AT QUARTERBACK

Boise State quarterback Hank Bachmeier was sacked four times in the loss to Oklahoma State, and it wasn’t all on the offensive line. A couple of them reverted back to that “holding onto the ball too long” thing. I say this not because I think Bachmeier should lose his starting job; overall he’s been good. Bachmeier’s pass efficiency rating of 147.0 is 50th in the country, two spots behind Nevada’s Carson Strong. But what about putting Jack Sears in the game for a series with a special package of plays? The reasoning: 1) as good as Sears was at Air Force last year, it would be an opportunity to cross up the USU defense, and 2) it would give Bachmeier to get a different perspective from the sidelines and notice things he otherwise might not. Only the coaching staff knows how that would affect rhythm and flow, though.

The Mountain West Defensive Player of the Week is a guy Boise State will see aplenty this week, linebackerJustin Rice of Utah State. Rice tied a career-high with 14 tackles and added an interception in the end zone and a forced fumble that was recovered by the Aggies on Air Force’s final drive during a wild 49-45 win Saturday in Colorado Springs. Rice came to Logan this year from Arkansas State with new USU coach Blake Anderson. He previously spent four seasons at Fresno State and was first-team All-Mountain West in 2019 (when the Broncos and Bulldogs didn’t meet). Rice redshirted in 2018—he did face Boise State twice in 2017 as a true freshman backup but didn’t record a tackle. This will be the first time the Broncos have faced Rice at full fury.

BY THE LIGHT OF DAY

Boise State gets to play a day game on the blue turf again, and this time it’s not against UT-Martin or Troy. The Broncos will play their Mountain West showdown versus rival Nevada at 1:30 p.m. a week from this Saturday on FS1. This will be only the fifth regular season afternoon game at Albertsons Stadium in the past 10-plus years (there was one against San Jose State last November that was cancelled due to COVID-19). You know who’s not excited? College of Idaho. The Coyotes host Carroll College that day at 1 p.m. It’ll be the first time since the Yotes resumed football in 2014 that C of I and the Broncos will be playing at home at the same time.

Okay, I’m making up this award. But two former Broncos get the nod as, well, Boise State Alumni Players of the Week in the NFL. One is Tennessee’s Jeremy McNichols, whose modest stats in Seattle Sunday don’t tell the whole story. McNichols had one carry for three yards (while Derrick Henry was rushing for 182) and three receptions for 26 yards. But all of those numbers came during the Titans’ final possession of regulation, the one that produced the touchdown to tie the game (Tennessee won 33-30 in overtime). McNichols accounted for 29 of the Titans’ 68 yards on the drive. The other honoree is the Cowboys’ Leighton Vander Esch, who looked like his old self in Dallas’ 20-17 win over the L.A. Chargers. Vander Esch made seven tackles, two of them for loss, including a sack.

Growing up, Zach Walker played youth hockey exhibitions between periods at Idaho Steelheads games and sold Chuck-A-Pucks on the concourse. Now, Walker is officially a full-fledged Steelhead, the first Boise native ever to play for the organization (he had signed with Idaho last year before the Steelies opted out of the 2020-21 season). Walker played his first pro campaign with the Pensacola Ice Flyers of the SPHL last season, posting four goals and six assists. He played four seasons of collegiate hockey at Boston College from 2016-20.