Lots of yards—not a lot of points. That’s the storyline for the Boise State defense so far this season. Since UCF, the Broncos have allowed 13, 21 and three points. 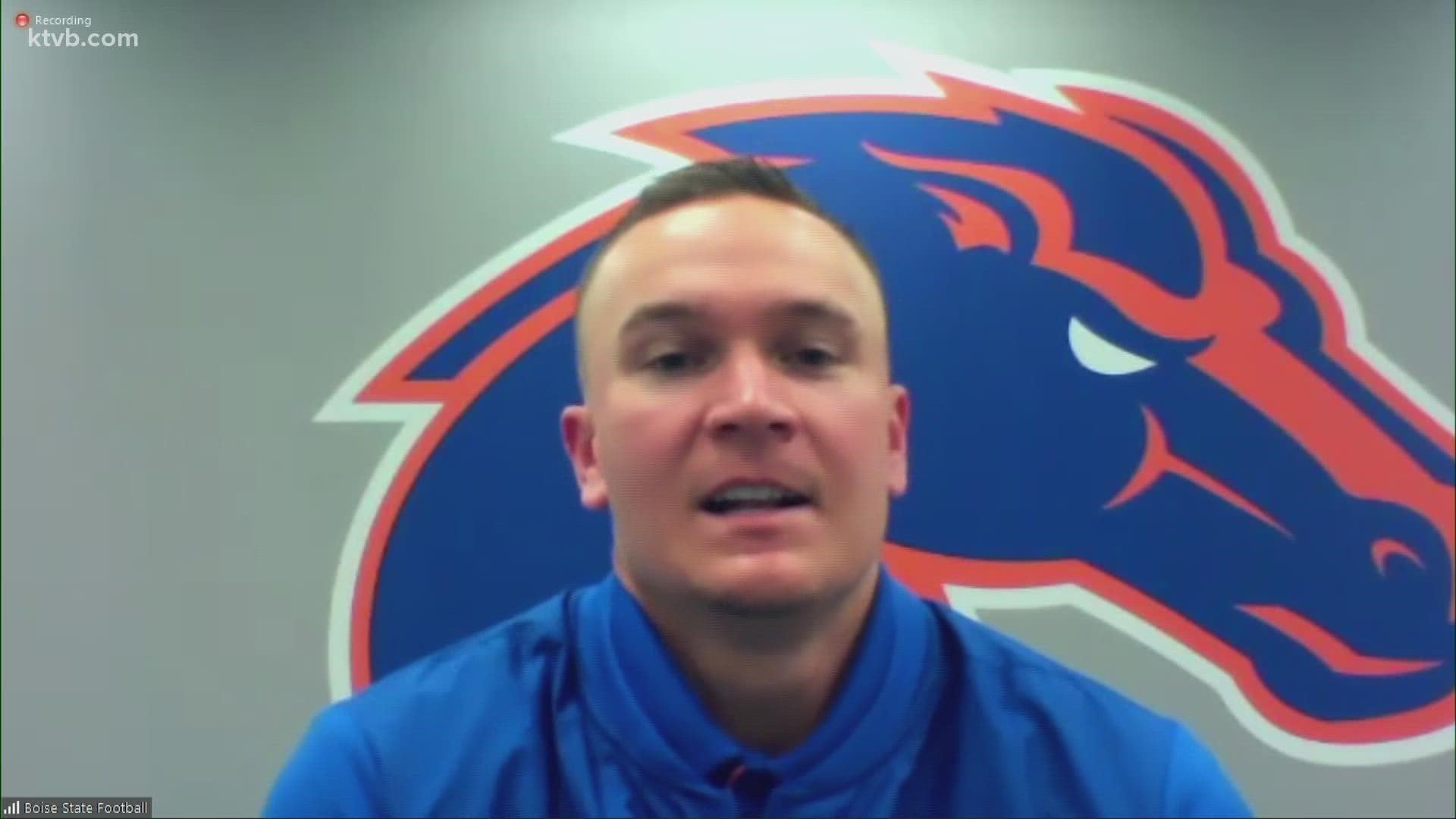 It was striking how easily Utah State was able to venture into Boise State territory Saturday, and how difficult it was the for Aggies once they did. USU marched inside the Boise State 35-yard line on four drives in the first half but did not score a point. Utah State finished 1-for-4 in the red zone on the day, and that was not an aberration for the Broncos defense this season. Boise State is allowing points on just 57 percent of opponents’ red zone trips—that’s tied for sixth in the country. And the Broncos are yielding only 18.2 points per game through four games, tied with Air Force for the top spot in the Mountain West. All this despite allowing 210 rushing yards per game, 117th in the country. Red zone moxie will be huge this Saturday against Nevada and Carson Strong. The bedlam around the blue turf should help.

AT THE OTHER END…

The red zone was a good place for the Boise State offense in its trip to Logan. The Broncos went 5-for-5, with three touchdowns and two field goals. There were all sorts of sidebars in there. The first Jonah Dalmas field goal was set up by Tyreque Jones’ interception. The first Boise State touchdown was set up by Hank Bachmeier’s 69-yard strike to Khalil Shakir, and saved when an apparent fumble by George Holani was correctly ruled a failed shovel pass. The second touchdown was keyed by Utah State’s botched fake punt, with the drive starting on the Aggies’ 18-yard line. And the final TD resulted from Demitri Washington’s fumble recovery at the 15-yard line. Timeout for props to quarterback Hank Bachmeier’s role: he threw for 287 yards, and his 282.8 yards per game is ranked 19th in the nation.

FRACAS BETWEEN THE FAVORITES

Is Saturday’s tilt a preview of the Mountain West championship game in December? It’s too early to tell, of course. But if you go by the conference’s preseason media poll, it is. In July, Boise State was picked for the ninth straight season to win the Mountain Division. The Broncos garnered 23 of 25 first-place votes. Nevada topped the West Division poll, getting 19 first-place votes. Paul Myerberg’s weekly re-rank of all 130 FBS teams in USA Today this week sets it up nicely with some leapfrog action. Boise State is up two spots to No. 36—the Wolf Pack, coming off a bye, stayed put at No. 37. There are two Mountain West teams ahead of the duo, though: San Diego State at No. 19 and Fresno State at No. 23.

Nevada went into the season with what was billed as the best wide receivers unit in the Mountain West, and one of the best in the country. It’s still formidable, but it’ll be without a key piece when the Wolf Pack visits Boise State Saturday. Elijah Cooks, who leads the Pack with four touchdown catches this year, is out for the season with a Lisfranc foot injury, according to Chris Murray of Nevada SportsNet. Cooks has 13 receptions for 157 yards. Nevada still has star wideout Romeo Doubs, who leads the team with 17 grabs, as well as Tory Horton, brother of former Broncos standout cornerback Tyler Horton. The Wolf Pack, says Murray, will also be missing starting strong safety Tyson Williams with a knee injury.

MORE GRIDIRON IN THE SUNSHINE

BYU has done plenty to justify its ESPN contract this year. The undefeated Cougars are ranked 13th in the AP Poll and 15th in the Coaches Poll. But the ‘Y’ doesn’t get an afternoon slot on the mothership—much less ABC—unless the matchup is compelling. Boise State has apparently done enough to fill the bill, both this season and through lifetime achievement, and next week’s Broncos-Cougars game will kick off at 1:30 p.m. in Provo. And it is slated for either ESPN or ABC. If it’s the latter, that’ll be two network TV appearances in three weeks. Unprecedented. (And it would be the lead-in to the Red River Showdown between Texas and Oklahoma.)

HARSIN SHAKES UP THE PLAINS

Auburn’s offense scored just one touchdown in its 34-24 win over Georgia State Saturday. It saved the day, coming with 45 seconds left in the game and the Tigers trailing by five points (they followed with a pick-six to round out the scoring). Coach Bryan Harsin showed his displeasure with the Auburn passing game by firing his wide receivers coach, Cornelius Williams, Sunday night. Harsin is replacing Williams with Eric Kiesau, his former wideouts coach (and offensive coordinator last year) at Boise State. Harsin had to do something—SEC fan bases are entirely unforgiving after scares like that. What if the Tigers had lost? Kiesau was at his best as wide receivers coach with the Broncos, mentoring standouts like Cedrick Wilson, John Hightower, and, of course, Khalil Shakir.

A SECOND YOTE HITS THE BIGS

There’s a new College of Idaho product in the majors. Former Yotes pitcher Riley O’Brien is set to be called up by Cincinnati today and will make his big league debut tonight in Chicago against the White Sox. O’Brien, who played for the Yotes in 2016 and 2017, has been pitching for Triple-A Louisville after climbing the Reds’ minor league ladder quickly this year. He is a combined 7-6 with a 3.16 ERA for three teams this season. O’Brien was an eighth-round draft pick of Tampa Bay in 2017. He will be only the second C of I alum ever to play in the Major Leagues. The first was Jason Simontacchi, who pitched for St. Louis and Washington in the 2000s. Simontacchi also played for Italy in the 2000 Summer Olympics.

The Boston Red Sox complete the biggest September collapse in big league history—in stunning fashion. After leading the wild card race by nine games on Labor Day weekend, the Red Sox lost 19 games during the month to fall into a tie with Tampa Bay going into the final day of the season. They were one strike away from at least going to a one-game playoff, but Baltimore rallied for two runs in the bottom of the ninth to stun the BoSox, 4-3. Just three minutes later, the Rays finished their rally from a 7-0 deficit against the Yankees when Evan Longoria homered in the bottom of the 12th inning for an 8-7 victory. Boston was in disbelief, and manager Terry Francona and the Red Sox parted ways 36 hours later.