Until recently, Boise State seldom resembled its ranking. Then came the 42-9 rout of New Mexico. Was that just a mirage versus a weak opponent? No. 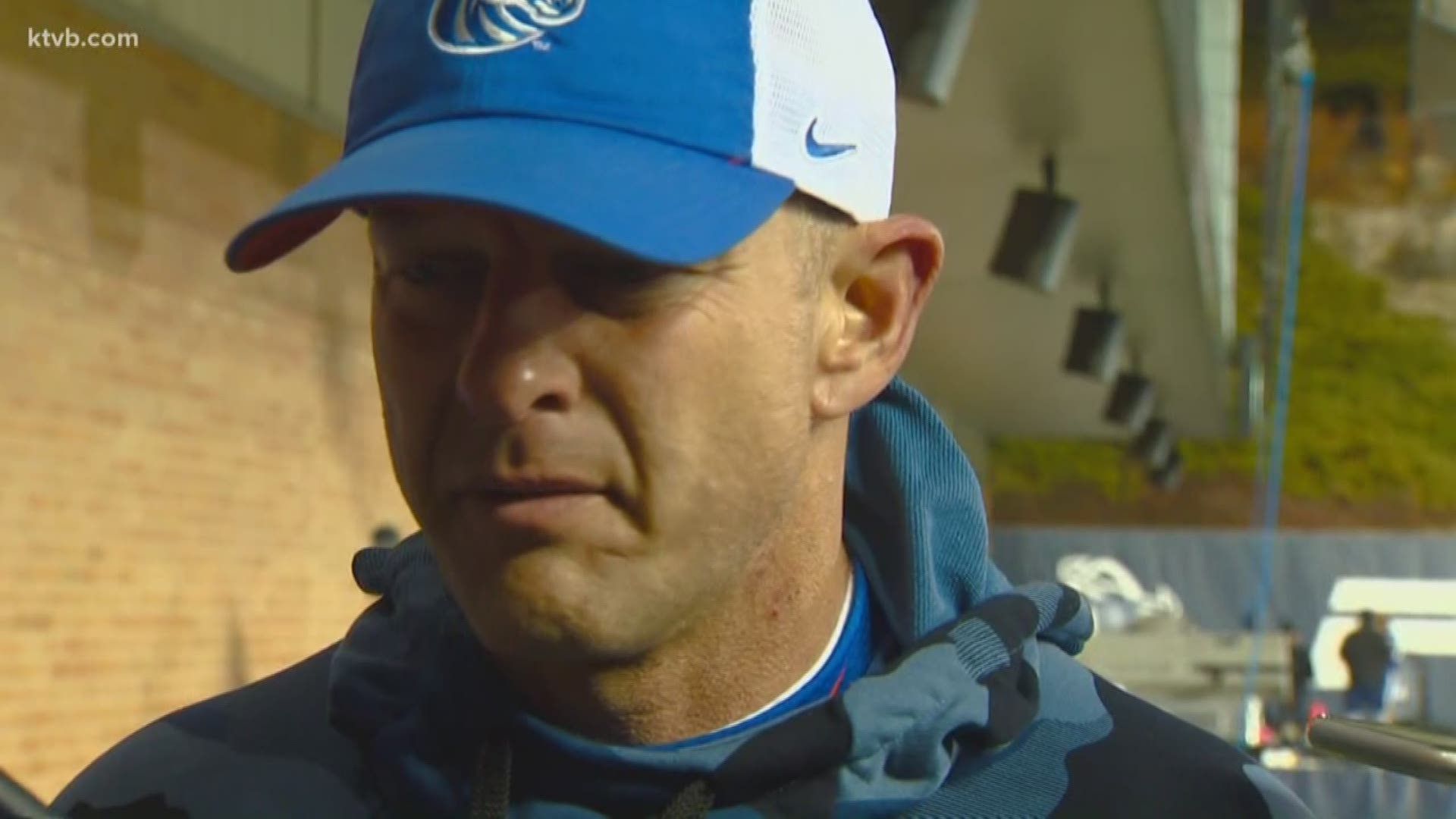 You figured something was up the first play of the game, when George Holani scampered 35 yards into Utah State territory.  On a night that it needed to put everything together, Boise State did, looking like the team everybody knew it could be in its 56-21 rout of Utah State in Logan.  It didn’t matter who did or didn’t start at quarterback—Jaylon Henderson was solid once again.  And the offensive line turned in unquestionably it’s best game of the year.  It did matter that Curtis Weaver started on defense, and that unit was big-time inspired.  Before pulling their starters near the end of the third quarter, the Broncos had held Jordan Love to 180 yards passing and the Aggies to 222 yards overall.  There was never a doubt about the location of the Mountain West championship game once the ball was kicked off.

No way Boise State was going to have an 11th straight season with a 1,000-yard rusher, right?  Well don’t look now, but Holani is in position to extend the nation’s longest such streak.  With his 178 yards at Utah State (on just 16 carries), Holani now has 870 yards for the season, just 130 short of the magic number.  He now has three games to do it—and needs to average 44 yards a game.  Holani has taken over the feature running back spot the last five games, rushing for 501 yards, 6.1 per carry, and six touchdowns.  As a team, the Broncos rushed for 297 yards at USU.  Ironically, they were at 301 before losing four yards on two kneel-downs at the end of the game.

There is one streak we know is continuing.  Boise State improved to 10-1 with its romp at Utah State.  This is the fourth straight 10-win season for the newly-crowned Mountain Division champions.  Let’s put it in perspective.  The Broncos are in their 52nd year as a four-year program, and they’ve had winning seasons in 46 of them.  And there have been 10-win seasons in 25 of them.  Almost half.  Boise State has recorded 17 10-win seasons in the last 21 years.  There have been eight in each of the last two decades.

TITLE WILL BE DECIDED IN DAYLIGHT

There was a little nugget that has long been hidden in information for the 2019 Mountain West championship game, and now that we know it’s going to be in Albertsons Stadium a week from Saturday, it becomes relevant.  It’s an afternoon game!  Yes, the matchup against Hawaii kicks off at 2 p.m. on ESPN.  That should be good for a couple of thousand ticket sales.

The Rainbow Warriors, who lost to Boise State 59-37 last month, got their same-season return trip to the blue turf by outlasting San Diego State Saturday night 14-11.  It’s the Broncos’ fourth title game berth in six years—all three of the previous ones have been in Boise, and the opponent all three times was Fresno State.  Incidentally, the defending champion Bulldogs won’t so much as go to a bowl game this year after falling to Nevada 35-28 Saturday night.

After seeing the same Frontier Conference teams exclusively this year, College of Idaho had a lot of fun playing somebody else Saturday.  In their first NAIA Playoff game in history, the Coyotes blew out Ottawa University of Arizona 70-23 at Simplot Stadium, their 17th win in a row and 11th this season.  Where do we begin with the superlatives?  The Yotes scored their most points in 94 years by putting up 42 unanswered after the Spirit had pulled within 28-23 in the second quarter.  Darius-James Peterson threw four first-half touchdown passes and rushed for 138 yards en route to becoming C of I’s career rushing leader.  Now the Yotes, ranked sixth in the NAIA, go on the road this Saturday to take on the nation’s fourth-ranked team, Grand View of Iowa, which is 12-0.

PETRINO GOES OUT ON TOP

The occasionally-maligned Mason Petrino had one last chance to make an impression on Idaho fans.  And did he ever Saturday at Northern Arizona.  Petrino put up pinball numbers in the Vandals’ exhausting 60-53 overtime victory in Flagstaff.  He was 35-of-42 for 491 yards and tied a school record with six touchdown passes in the victory.  What can you say?  James Cotton also tied a school record, a 50-year-old standard, by making 17 catches covering 223 yards with two TDs.  And Nick Romano, the true freshman running back out of Rocky Mountain High, rushed for 154 yards and two scores and had four receptions for 98 yards and two more TDs.  As a team, Idaho racked up 738 yards of offense.  An amazing way to end the season.

You look at the box score, and you wonder how Boise State was even in the game at Pacific Saturday.  Derrick Alston went 2-for-12 from the field and scored six points.  R.J. Williams went 3-for-9 and scored eight.  But Senior Night came a little bit early for the Broncos, as Justinian Jessup, Marcus Dickinson and Alex Hobbs, all fourth-year guys, bailed them out in an 82-76 triple-overtime victory in Stockton.  All three were instrumental in extending the game, and Jessup’s three free throws and Dickinson’s monster three-pointer plus two freebies made the difference in the third OT.  It was only the third time ever a Boise State game has gone to three overtimes, and it came just three days after the OT win over BYU.

THERE’S A REASON THEY’RE NO. 8

The Boise State women shot 61 percent from the field Sunday against the No. 8 team in the country.  Problem is, that Louisville team shot 71 percent in the first half and ran away from the Broncos 98-82.  Twenty turnovers didn’t help.  The Cardinals led 58-34 at the half.  The highlight player for Boise State was senior guard Jayde Christopher, who tied a school record with 14 assists.  Braydey Hodgins and Rachel Bowers each scored 16 points for the Broncos.

STEELIES SWEEP, MERRITT IN THE MONEY

The Idaho Steelheads needed something good to happen on home ice.  Enter the Kansas City Mavericks.  The Steelheads swept K.C. over the weekend, dominating the Mavs 4-2 Friday and slipping by them 3-2 in overtime Saturday.  Seven different Steelies scored in the two games, with the hero goal coming from Will Merchant 1½ minutes into the OT in the second one.  And Troy Merritt left some money on the course Sunday at the RSM Classic in Sea Island, GA.  The former Boise State star zoomed up the leaderboard Saturday with a four-under 66 before settling for a tie for 30th with a final round 71.  Merritt still earned $43,230.

Air Force becomes the first team in 18 years to beat Boise State in three consecutive seasons when the Falcons hold off the Broncos 27-20.  The loss took away Boise State’s shot at the Mountain West championship game.  The Broncos led 7-0 when Jeremy McNichols gained 60 yards and a touchdowns on the first two plays from scrimmage.  But the star tailback picked up just 22 yards the rest of the way while quarterback Brett Rypien was going 9-for-26.  Boise State had a first-and-goal at the Air Force five-yard line in the final minute but could not score the tying touchdown.