Who knows? What happened with Boise State in the turnover department Friday night could be contagious. A lot of frustration was remedied in the rout of UTEP. 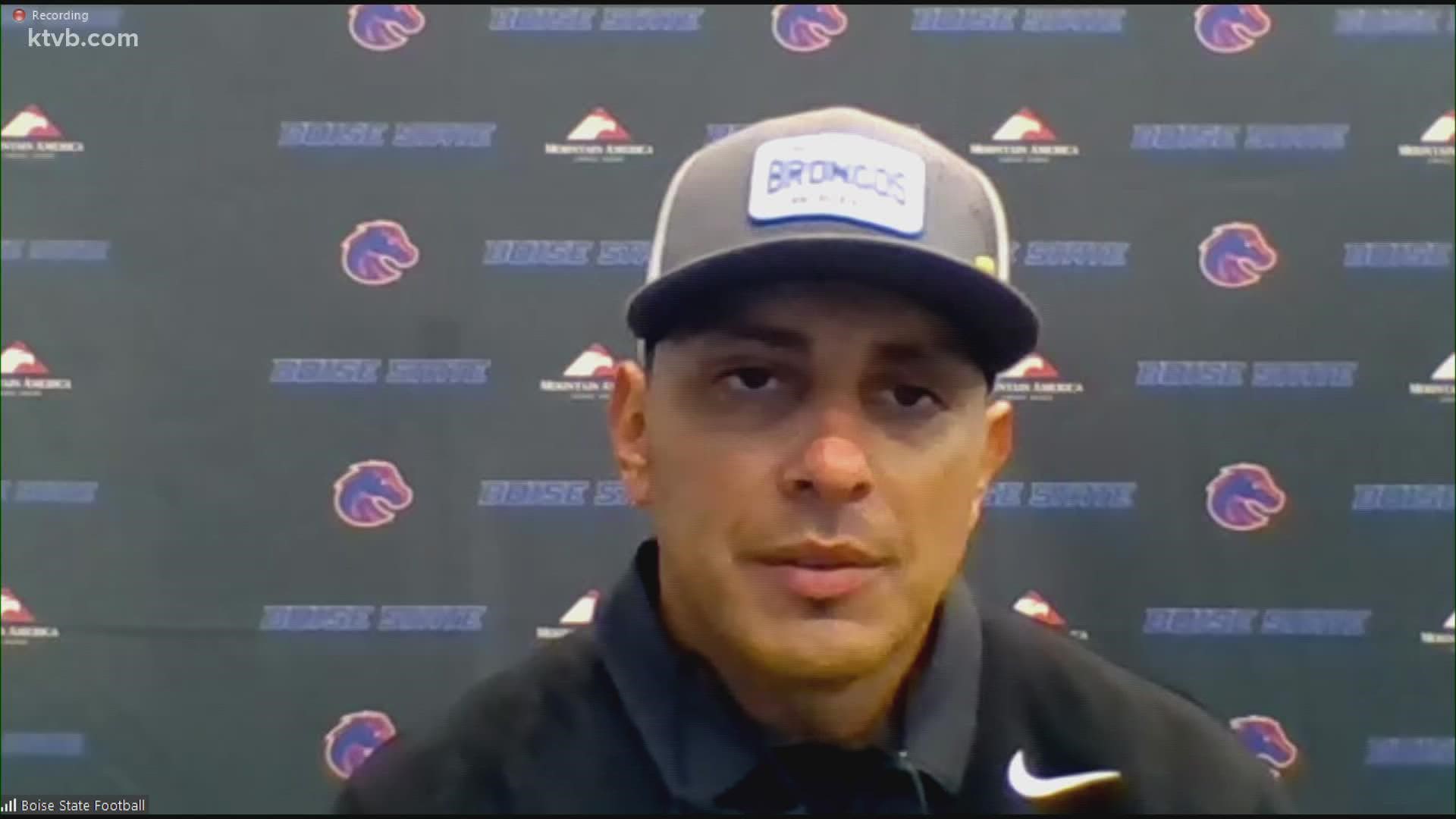 My column Friday had to do with fumble recoveries being next on the Boise State defense to-do list. How about three of those in the Broncos’ 54-13 win over UTEP later that night on the blue turf. It’s one thing to force them, but it’s another thing to find them, as we’ve seen the past season-plus. But the one that actually broke the 21-month drought was classic. Shane Irwin strip-sacked Miners quarterback Gavin Hardison, and Scott Matlock scooped it up and returned it to the three-yard line. Boise State was in the end zone one play later. But there would be more. Three fumble recoveries for the game, the first ones since the 2019 Mountain West championship game. The other two both involved the same two Broncos, as JL Skinner forced them and Zeke Noa picked them up.

There were also the three interceptions, giving Boise State five for the season. Two of them came from a guy who was starring in high school football a year ago in Colorado, true freshman safety Seyi Oladipo. And the first one was the turning point of the game. With UTEP appearing headed for a touchdown that would make it a two-possession game in the second quarter, Oladipo got a pick at the goal line and returned it 52 yards. Six plays later, the Broncos were in the end zone again, and extended their lead to 28 points. That’s how routs happen.

The scene-setter for this game: UTEP had three rushers averaging more than six yards per carry coming in, eight days after UCF gashed Boise State for 255 yards on the ground. There were anxious moments in the first quarter, as the Miners rushed for 58 yards at almost a four yard-per-carry clip. The first run of the game covered 11 yards, and it was, “Uh-oh.” But the Boise State defense dug in during the second, third and fourth quarters, when UTEP averaged just 1.8 yards per tote. For the game, the Broncos allowed just rushing 104 yards and 2.6 yards per attempt.

There’s work to do on the offensive side. To be fair, Boise State didn’t emphasize the running game in this one, but still, it had just 34 yards and two yards per carry before the second team came in near the end of the third quarter. In mop-up time, the Broncos got 87 of their 121 yards on the ground. It took Tyler Crowe only three carries to become the team's leading rusher on the night. Crowe ended up as the game’s top runner with 45 yards on seven carries, and—lo and behold—he’s Boise State’s leader for the season now. This is not the last time the running game will come up this week as Oklahoma State comes to town.

Hank Bachmeier had not thrown for as many as 300 yards in a game since he went for 409 in his Boise State debut at Florida State in 2019. That changed in a big way against UTEP, as Bachmeier threw for 340 yards on just 17 completions, exactly 20 yards per connection. His execution was perfect on his two touchdown passes—a play-fake in the second quarter that froze the defense and allowed Stefan Cobbs to run free for a 61-yard score. Then in the third quarter, Bachmeier faked a fly sweep to Khalil Shakir as the flow was going left, and he hit a wide-open Tyneil Hopper against the grain for a 23-yard TD. Woe is me if I don’t mention Shakir and his 161 yards on seven catches. He made highlight reel plays on two of the Broncos’ first three offensive snaps, including one of the greatest one-handed grabs you’ll ever see.

There were no real surprises in the Mountain West over the weekend, unless you consider Colorado State’s 24-21 home loss to Vanderbilt a surprise. The Commodores had lost 11 straight games and 13 in a row to FBS teams but rallied from a 14-0 first-half deficit—the Rams are now 0-2. The two best victories were produced by Air Force, a 23-3 winner at Navy that saw the Falcons hold the Midshipmen ton anemic 68 yards of offense, and San Diego State, which routed Arizona 38-14 behind a rushing attack that rolled up 271 yards. The Aztecs have now defeated six Pac-12 teams over the past six seasons. Elsewhere, Nevada thumped Idaho State 49-10 thanks largely to 381 yards passing and four touchdown throws from Carson Strong.

It looks like Idaho has settled on Mike Beaudry as its starting quarterback, although nothing will be official until coach Paul Petrino says so. Beaudry was 23-of-36 for 196 yards and two touchdowns in the Vandals’ 56-14 loss at Indiana Saturday, while CJ Jordan was 0-of-3 through the air. Look for Beaudry as Idaho faces another tough assignment this week at Oregon State. The thumping at the hands of the Hoosiers came as much from special teams as anything else. Indiana scored on a blocked punt and an 81-yard punt return. Still, the Vandals offense didn’t record a first down until it was 35-0. Idaho is 0-5 versus FBS teams since returning to the Big Sky in 2018.

HAWKS MAKE IT TO THE FINALS

It did not look good as the Boise Hawks trailed Ogden 5-0 going into the fourth inning in a playoff elimination game Saturday night. But, as they did often during the second half of the season, the Hawks picked away, catching the Raptors before the contest went into extra innings. A single by Roby Enriquez drove in Alejandro Rivero with what proved to be the winning run in the top of the 12th in an exhilarating 8-7 victory that sends Boise into the Pioneer League Championship Series against Missoula. Game 1 is tonight on the Paddleheads’ home field, while Games 2 and 3 are scheduled for Memorial Stadium Wednesday and Thursday (if necessary). The Hawks went 2-7 against Missoula in the regular season.

A creative gimmick makes its debut at Bronco Stadium. One that has become a signature of one of the most-recognizable sports venues in the country. Boise State played its first game on blue turf, annihilating Division II Humboldt State, 74-0. The Broncos went on to their first losing season at 5-6, and it would be 11 years before the rest of the nation saw the blue turf on national TV in the 1997 Humanitarian Bowl. But now, after years of ESPN exposure, “The Blue” has become a calling card for the university and the city.