Hank Bachmeier has taken his licks in 13 games as Boise State’s starting quarterback. Tim Keane arrives with a history of helping keep QBs out of harm’s way. 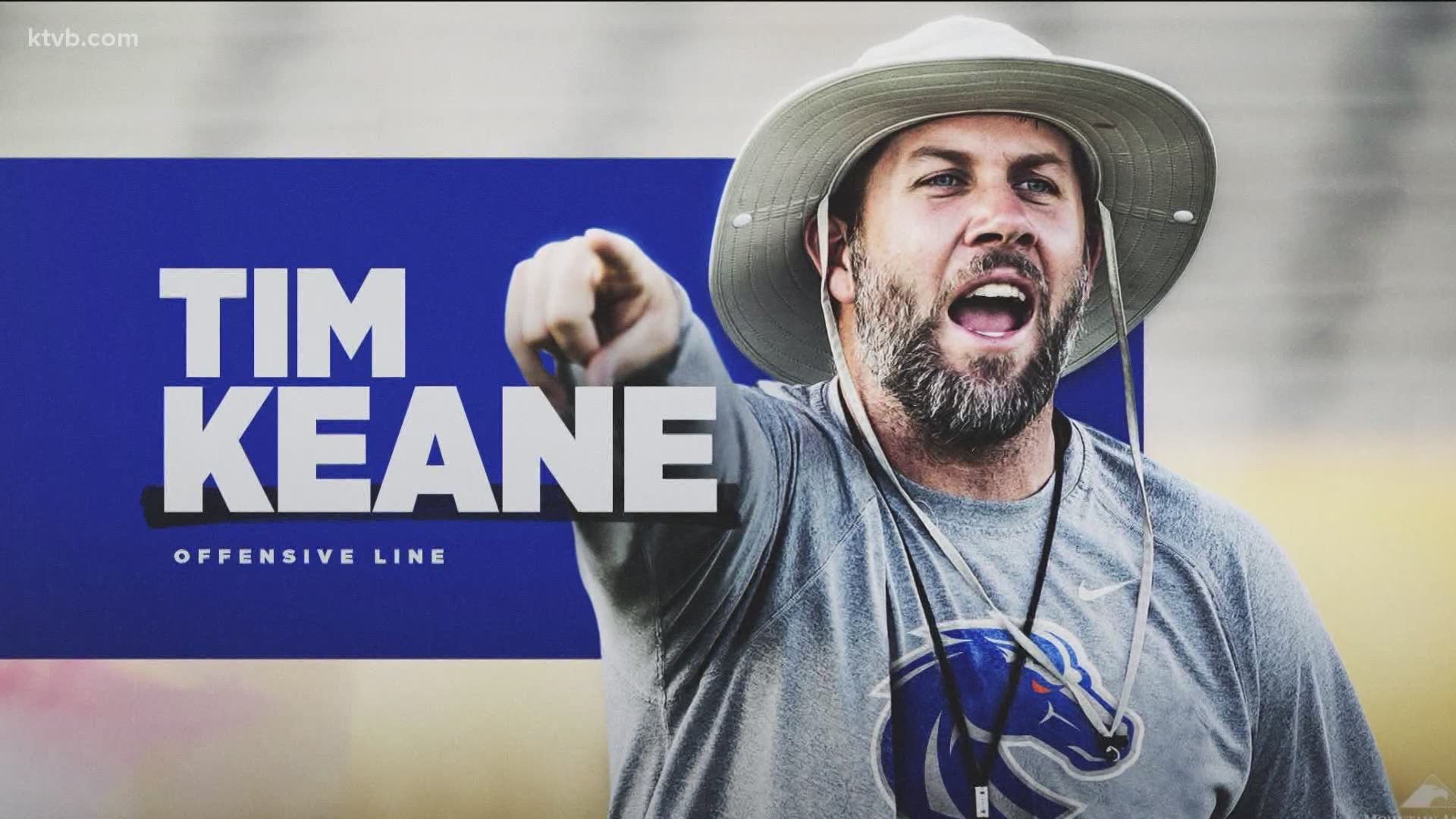 Boise State has another “Davis guy” on the staff (and a one-time Yotes guy, for that matter) with the hiring of Tim Keane as offensive line coach on Friday. This is a critical position. Just ask any Broncos fan. But really, it is. What has been one of the main issues the past few years? The pressure opponents get on the quarterback, Hank Bachmeier in particular. Let’s dissect some sack stats. In the press release announcing Keane, it was pointed out that UC Davis allowed 48 sacks in 1,615 pass plays the past three seasons. That’s one every 33.6 snaps. In their last three full seasons (not including 2020), the Broncos yielded 87 sacks in 1,461 pass plays—every 16.8 snaps, almost exactly twice the rate of the Aggies. If change is going to come, that’s where it starts with Keane.

BATES’ CHANCE TO BOOST HIS RESUME

Boise State’s Avery Williams received an invitation to the East-West Shrine Game, but it’s only celebratory, as the game won’t actually be played this year. But teammate John Bates will get to take advantage of college football’s biggest all-star game, the Senior Bowl. Bates has been invited to the showcase in Mobile, AL, scheduled for this Saturday. It’s a great way for him to round out his portfolio, as it still feels incomplete. Injuries and COVID concerns limited Bates to 12 catches for 117 yards this past season. He had 47 receptions for 579 yards and two touchdowns in his Boise State career. There’s a lot more to Bates—now he can show it.

Dirk Koetter has been building a house in Boise, and now that he has retired as offensive coordinator of the Atlanta Falcons, he plans on making it his primary address. Koetter has a definitive place in Boise State football history. He applied for the Broncos head coaching job in late 1998, but Houston Nutt got it. When Nutt left in the middle of the night for Arkansas following one season, Koetter was announced to replace him later that day. The Boise State players he inherited had been through hell, left in the lurch again just a year after losing coach Pokey Allen to cancer. It was Koetter who kicked off the school’s golden era, taking the Broncos to the Big West championship and the Humanitarian Bowl in his second season. The seniors on that squad were freshmen on the 2-10 team in 1996. It was an emotional time.

It was just 2½ weeks ago that Montana State coach Jeff Choate was interviewing for the Boise State job that went to Andy Avalos. Choate is leaving Bozeman after all—to go to Texas as special teams coordinator and co-defensive coordinator under new coach Steve Sarkisian. He’ll be sharing the latter post with Pete Kwiatkowski, the former Broncos All-American and D-coordinator who left Washington for a job with the Longhorns late last week. Choate had the Bobcats on a steady upward trajectory, with an appearance in the FCS semifinals in 2019, MSU’s first since winning the 1984 national championship. But 2019 was the last time Montana State played, and the Bobcats have opted out of the Big Sky’s spring season.

Boise State is still hangin’ with its 13-game winning streak and 9-0 Mountain West record after Friday night’s Game 2 against Fresno State was called off due to coronavirus issues within the Broncos program. Turns out the test that triggered the shutdown was a false positive, and Boise State is back on the practice floor, preparing for a couple of huge Mountain West games Wednesday and Friday at Colorado State. The conference makes it sound like the postponed game versus the Bulldogs will still happen. Makeup games that matter in the standings will be a priority, and that one will matter. Right now it’s a three-team race, as Utah State is 9-1 in the Mountain West and CSU is 8-2.

The second game at Fresno State was certainly better than the first for the Boise State women, but the result was the same, as the Bulldogs held off the Broncos 67-64 Saturday. Mallory McGwire’s career-high 26 points almost prevented the sweep. On the men’s side, Colege of Idaho split with Simpson University over the weekend in Caldwell, while Northwest Nazarene finished a three-game sweep of Western New Mexico Saturday night in Nampa. Tuesday’s Mayors Cup game between C of I and NNU has been canceled (not COVID-related, they say). Instead of a home-and-home series, it’ll now be just one game, probably a couple of weeks from now. Details are being worked out.

A generation of baseball fans—a generation of human beings—lost a a piece of itself Friday when Hank Aaron passed away at the age of 86. Many still consider him baseball’s true Home Run King. I was hoping this would come up. It happened before I moved to Boise, so I’m appreciative of this high school classmate’s Facebook post: “I remember when the Milwaukee Braves came to play their farm club, the Boise Braves. My dad took me to the games every chance he got. This game was special though because my dad made sure that I got Hank Aaron's autograph after the game. I still have it. What a great man, and sports hero. RIP Hank Aaron.” The Boise Braves were affiliated with the Milwaukee Braves from 1955-63.

The Boise State women’s gymnastics team has to be headed for the top 20 after a second straight upset of a top 15 team. The Broncos took down No. 15 BYU Saturday night by 75-hundredths of a point after a video review overturned a one-point out-of-bounds deduction on Maddie Nilson’s floor routine. The Broncos began the 2021 season with an upset of No.13 Oregon State 10 days ago. It was Boise State’s first meet since its 2020 season was prematurely ended by the coronavirus outbreak last March, just ahead of the Mountain Rim Gymnastics Conference Championships. Also, the Boise State men’s tennis team opened the season in dominant fashion with a 6-1 win over Montana on Friday and a 7-0 sweep of Grand Canyon on Sunday.

Boise State turns in its highest-scoring game ever in a 118-96 win over Portland State in Bronco Gym. Broncos scoring leader Ron Austin led the way with 41 points, still one of only four 40-point games in Boise State history. In fact, the Broncos at one point went 39 years without one—until Chandler Hutchison’s record 44 points against San Diego State three years ago. Austin would go on to average 24.5 points a game in 1970-71, still a school record.