Boise State football: Holani is off the snap count

Boise State’s running game has not been the same with George Holani at full strength. The question Saturday: can it get some sameness back with Holani in a feature 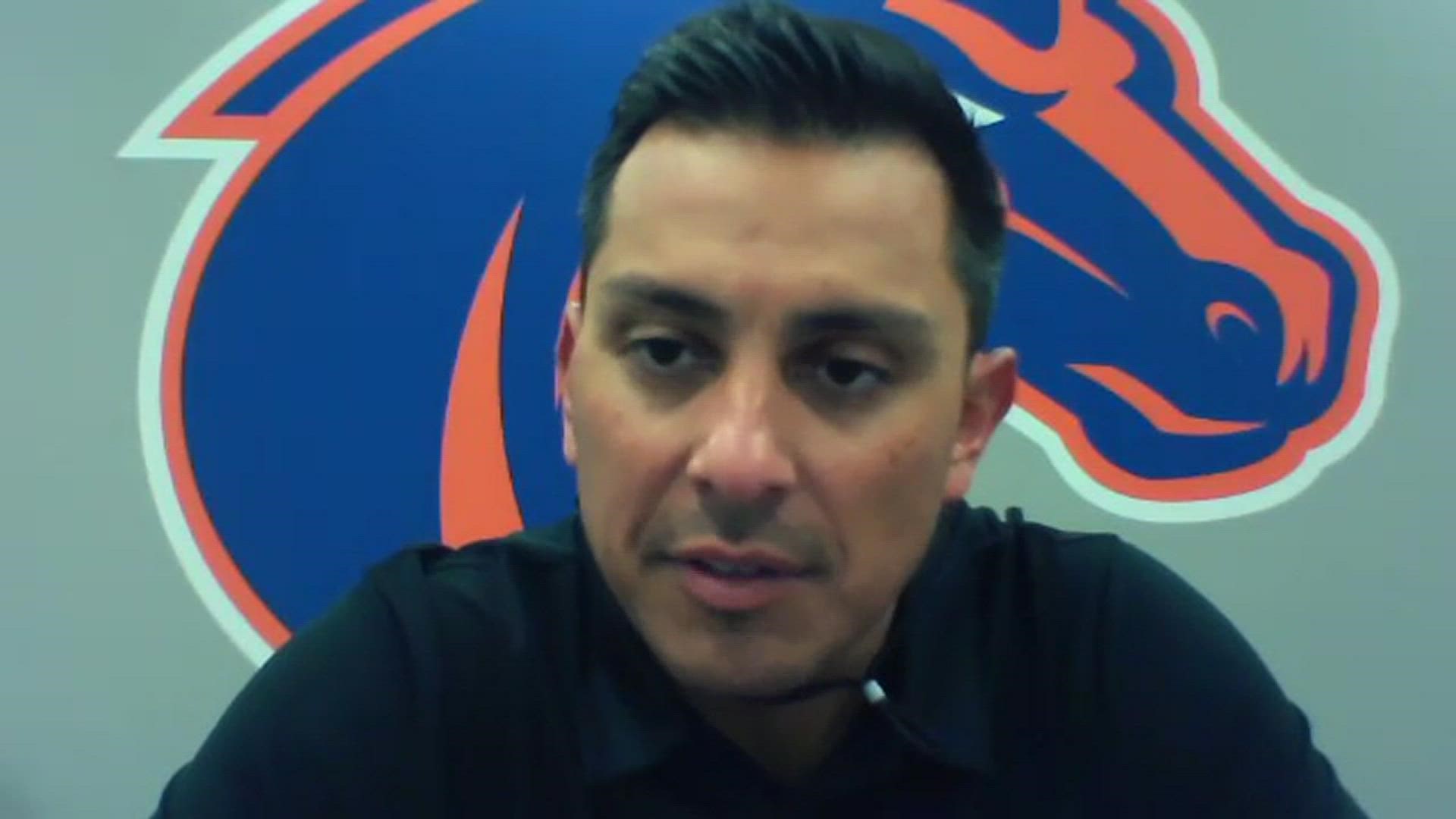 All that talk about the running game. We took note of George Holani getting only five touches (plus one target through the air) in Boise State’s 54-13 win over UTEP. Turns out he was on a “snap count” (like Khalil Shakir was at UCF). Holani made the most of it, rushing for 22 yards and a touchdown. Now, Broncos offensive coordinator Tim Plough says there will be no such restrictions on Holani in this Saturday’s huge game against Oklahoma State on the blue turf. The last time Holani had more than five carries in a game was in last year’s season opener, when he had 14 attempts for 100 yards (7.1 yards per attempt). That was the last time the Boise State running game was normal. That’s all anyone can ask for: that the Broncos get their ground attack back to normal. It has to be at least that against the Cowboys.

Three Boise State Broncos earned various honors for the job they did in the rout of the Miners. Seyi Oladipo is the Mountain West Freshman of the Week after logging the first two interceptions of his career and returning them for a total of 83 yards. Oladipo also posted a five-yard tackle for loss and a pass breakup. Stefan Cobbs, whose status for this week is undetermined after a leg injury against the Miners, landed on the Paul Hornung Award Honor Roll for his versatility. Cobbs had an 81-yard punt return and a 61-yard reception go for touchdowns. And kicker Jonah Dalmas, a perfect 4-for-4 on field goals and 6-for-6 on extra points last Friday, made the Lou Groza Award Stars of the Week list.

In addition to Cobbs, safety Tyreque Jones left the UTEP game with an injury. Jones is still listed as a starter on the new Boise State depth chart (actually Cobbs is, too). One player missing from the two-deep is nose tackle Scale Igiehon, who has taken a “leave of absence” due to a personal matter. Divine Obichere has moved in as the backup behind starter Jackson Cravens. Defensive coordinator Spencer Danielson says D-linemen Keeghan Freeborn of Rocky Mountain and Herbert Gums, who would come in handy right now, are still working their way back from old injuries. Also, with Riley Whimpey out in the first half this week due to his targeting call against the Miners, Brandon Hawkins will start in his linebacker spot against the Cowboys.

PERSONNEL OF THE FUTURE

Boise State either has its first running back commit or its second wide receiver commit for the 2022 recruiting class, depending on your information source. Ashton Jeanty is a 5-9, 195-pounder from Lone Star High in Frisco. TX. His measurables sound like those of a running back, and that’s what the graphic said that accompanied Jeanty’s announcement tweet on Monday. But 247 Sports has him as a wide receiver. Maybe he’s another Jeremy McNichols. In 2014, McNichols joined the Broncos as a wide receiver but quickly became of the program’s all-timers at running back. Jeanty also had offers from Tulane, Dartmouth and all three service academies.

ARE FANS PLAYING WITH FIRE?

No consequences—yet—for the lack of compliance with the mask mandate last Friday at Albertsons Stadium. It looks like fans have bought another game before a possible hammer comes down. Everyone wore masks coming through the stadium entrances. At kickoff in the stands, I’d say compliance was down to 50 percent. By halftime it was about 15. Boise State didn’t police it (it would have been a losing battle anyway). Other things from Game 1 are correctable, like the lines at the concession stands (longer than I’ve ever seen), and the decision by thousands of fans to head in five minutes before kickoff, creating gridlock at the entrances (and the missing of most of the first quarter).

ALSTON GETS A TRAINING CAMP GIG

Former Boise State star Derrick Alston Jr. has been signed by the Utah Jazz and has been invited to training camp. Alston played for Golden State in the NBA’s Las Vegas Summer League, coming off the bench to average 16 minutes, 5.8 points and 4.0 rebounds. He wasn’t retained by the Warriors, and his chances at getting a training camp spot somewhere were not looking good. Alston, the one-time walk-on, was first-team All-Mountain West last season after finishing fourth in the conference in scoring at 17.0 points per game. He is the 10th-leading career scorer in Broncos history.

The Missoula Paddleheads had dominated the Boise Hawks during the regular season, and they got the best of them again Monday night with an 8-2 victory in Game 1 of the Pioneer League Championship Series. Former Northwest Nazarene pitcher Zach Penrod got the start for the Hawks and did what he could, allowing just two runs on four hits over the first 4 1/3 innings. But Missoula had an answer, holding Boise’s hot bats to five hits all night. It was a 4-2 game before the floodgates opened in the bottom of the eighth. The Hawks’ two runs came in the sixth inning on RBI doubles by Jason Dicochea and Alejandro Rivero. The two teams now travel to Boise for Game 2 Wednesday night at Memorial Stadium.

The Boise State women’s volleyball team, at 8-1 going in and coming off two tournament titles, had something to prove when it hosted No. 10 Utah on Monday. The Broncos dominated the Utes 3-1, picking up the biggest win in program history, their first win ever over a top 10 team. “We didn’t prepare like Utah was unbeatable,” said Boise State coach Shawn Garus. “We prepared like we had a great team coming in and a great opportunity.” And that it was, with the Utes having just upset No. 3 Nebraska on the road. The Broncos have won seven matches in a row.

The first home game in the final season of green turf at Bronco Stadium. And UC Davis visits with a new junior college transfer quarterback named Chris Petersen. The Division II Aggies gave Division I-AA Boise State all it wanted before falling, 13-9. The Broncos were helped by a 56-yard Roberto Moran field goal, a school record that stands to this day. Petersen would go on to set UC Davis career records for completion percentage (69.7) and lowest interception percentage (2.5).