Boise State football: ‘Perception-itis’ as it pertains to the Lobos

In terms of point spread, it was the biggest upset of the 2015 college football season—the ultimate “on any given night” game. New Mexico stunningly won. 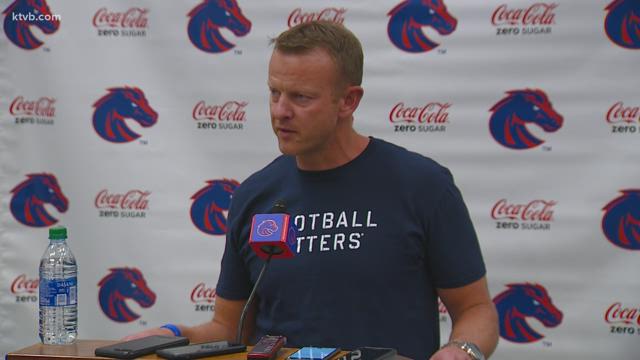 The term Boise State coach Bryan Harsin coined last week when recapping San Jose State was “perception-itis.”  Many didn’t want to give the Spartans credit for the massive strides they’ve made this year.  That problem has popped up in the past with New Mexico.  What’s your perception of a 31-point underdog?  That’s what the Lobos were when they came to the blue turf in 2015, and they left with a bizarre 31-24 upset.  Brett Rypien threw 75 passes that night, Thomas Sperbeck caught 20 of them, the Broncos ran off 114 plays, and they still lost.  And that was only a partial aberration.  Two years ago, Boise State got by 28-14.  This year’s Lobos have lost six games in a row, but all of them by 14 points or less. They’re 28-point underdogs against Boise State.  What do you think?

New Mexico coach Bob Davie says his team is squared away despite the death of teammate Nahje Flowers and has focused in on Boise State.  “If you need any confirmation as a team that we can go win this football game, look at (last) Saturday night,” said Davie.  He used Nevada as an example.  The Lobos were in their game in Reno two weeks ago before falling 21-10, and the Wolf Pack just upset No. 25 San Diego State.  And there’s good ol’ Wyoming.  UNM lost in Laramie 23-10, and Davie stresses there wasn’t that big a gap between the two teams.  You see the number “10” there twice, though, and that’s Davie’s problem.  New Mexico has struggled to get into the end zone this year and is ranked 103rd in the nation scoring at 23.4 points per game.

ABOUT THROWING TO THE BIG GUYS

Could tight ends help bail out Boise State’s stalled drives?  The Broncos’ first two completions of the Wyoming game went to tight ends, as Chase Cord hit Garrett Collingham for eight yards and John Bates for nine.  That was part of a 92-yard touchdown drive on the Broncos’ first possession that saw Cord go 6-of-6 for 66 yards, completing throws to six different receivers.  Boise State netted a total of 31 yards and no points on its next four drives.  The tight ends didn’t have another catch the entire game (although Collingham had one he dropped).  Three-quarters of the way through the regular season, the group has 26 receptions for 324 yards and two touchdowns, comparable to last year’s 13-game total of 33 grabs for 306 yards and three TDs.

PICKS AT A PECULIAR PREMIUM

It’s a confounding thing, this lack of interceptions by Boise State this season.  We know that Riley Whimpey made a huge play on Wyoming’s first snap of overtime last Saturday, breaking up a pass in the end zone.  Thing is, Whimpey had it in his hands, just as he did on a throw the week before near the goal line at San Jose State.  That’s been happening a lot.  The Broncos have only five picks all season.  And just 12 since the beginning of the 2018 campaign.  But believe it or not, there are 22 FBS teams with fewer interceptions this year than Boise State.  One of them is New Mexico, with only two picks all year.

DOUBLE-D WITH ANOTHER NFL SHOT

One of Boise State’s most popular players of the decade, Donte Deayon, has been resilient as he has toiled on the L.A. Rams practice squad.  And Wednesday, Deayon was rewarded, as he was signed to the Rams’ 53-man roster ahead of Sunday night’s game against the Chicago Bears.  He hasn’t played since Week 5 last year with the New York Giants.  In eight career NFL games, Deayon has 16 tackles and three pass deflections.  He’s fifth on Boise State’s all-time list with 17 interceptions from 2012-15.

NAME THE SCORE IN PROVO?

Since Idaho State’s an FCS team, you have to search a little harder to find the odds on the Bengals’ game at BYU Saturday.  It would be easy to say, “You don’t want to know,” since ISU has been in a tailspin since being routed at Idaho.  The Cougars are favored by anywhere from 13 to 30 points.  Sure seems like it should be on the upper end of that (at the very least).  Zach Wilson, who injured his throwing hand seven weeks ago, may return at quarterback for BYU this week, although it shouldn’t make any difference.  Baylor Romney is capable of engineering a sizeable victory, as long as the Cougars are paying attention.  The Bengals have lost four in a row, and in that stretch quarterback Matt Struck has thrown nine interceptions against five touchdowns.

LOOKING INTO THE HOOPS FUTURE

Three previously-revealed commitments all came through for Boise State men’s basketball on the first day of the fall early signing period Wednesday.  The Broncos inked Kasean Pryor, a 6-9 guard from Ann Arbor, MI, who’s spending a post-graduate season at Link Year Prep Academy in Branson, MO.  Also aboard is Burke Smith, a 6-11 center from Glen Ellen, VA (Boise State could use him right now).  The third signee is an Idahoan, 6-1 guard Jace Whiting from Burley High, who was a USA Today All-Idaho second-teamer last season.  Whiting is planning a two-year LDS mission before joining the Broncos.

NEXT STEP FOR DELAET

The north-of-the-border guy goes South of the Border this week, the fourth stop in his return to the PGA Tour.  Graham DeLaet, hoping to put his debilitating back problems behind him, tees off at the Mayakoba Classic in Playa del Carmen, Mexico.  The former Boise State star, Eagle resident and Saskatchewan icon has made one of three cuts since resuming play following a two-year layoff (he tied for 70th last month at the Houston Open).

NEW FOE, BUT NOT AN UNFAMILIAR ONE

Boise State women’s soccer is a day away from its first NCAA Tournament appearance in 10 years, facing BYU in Provo tomorrow night.  This may be the Broncos’ first-ever meeting with the Cougars on the pitch, but it doesn’t feel that way to coach Jim Thomas.  “It’s local, we don’t have to go to far, or change time zones or anything weird like that,” said Thomas. “It’s a group that we know, a lot of our players grew up playing their players so there are a lot of common ties there."  Boise State and BYU had two common opponents in the regular season.  The Broncos lost to Utah 1-0 in double-overtime while the Cougars beat the Utes 2-0.  Both teams routed Southern Utah, with Boise State winning 4-0 and BYU 7-0.

Pro basketball comes to the Treasure Valley, as the Idaho Stampede make their debut at the Idaho Center.  The Stampede were led by former Boise State coach Bobby Dye and defeated the Sioux Falls Skyforce in the opener, 102-92.  The first points in franchise history came on a three-pointer from guard Rusty LaRue, who at the end of the night was called up by the Chicago Bulls.  The Stampede moved to Salt Lake City after the 2015-16 season.  This must be a bittersweet day for former Stampede managing investor Bill Ilett and his ownership team.