A process that was excruciating to some became exhilarating to most on Sunday as Andy Avalos was introduced as Boise State’s new head football coach. 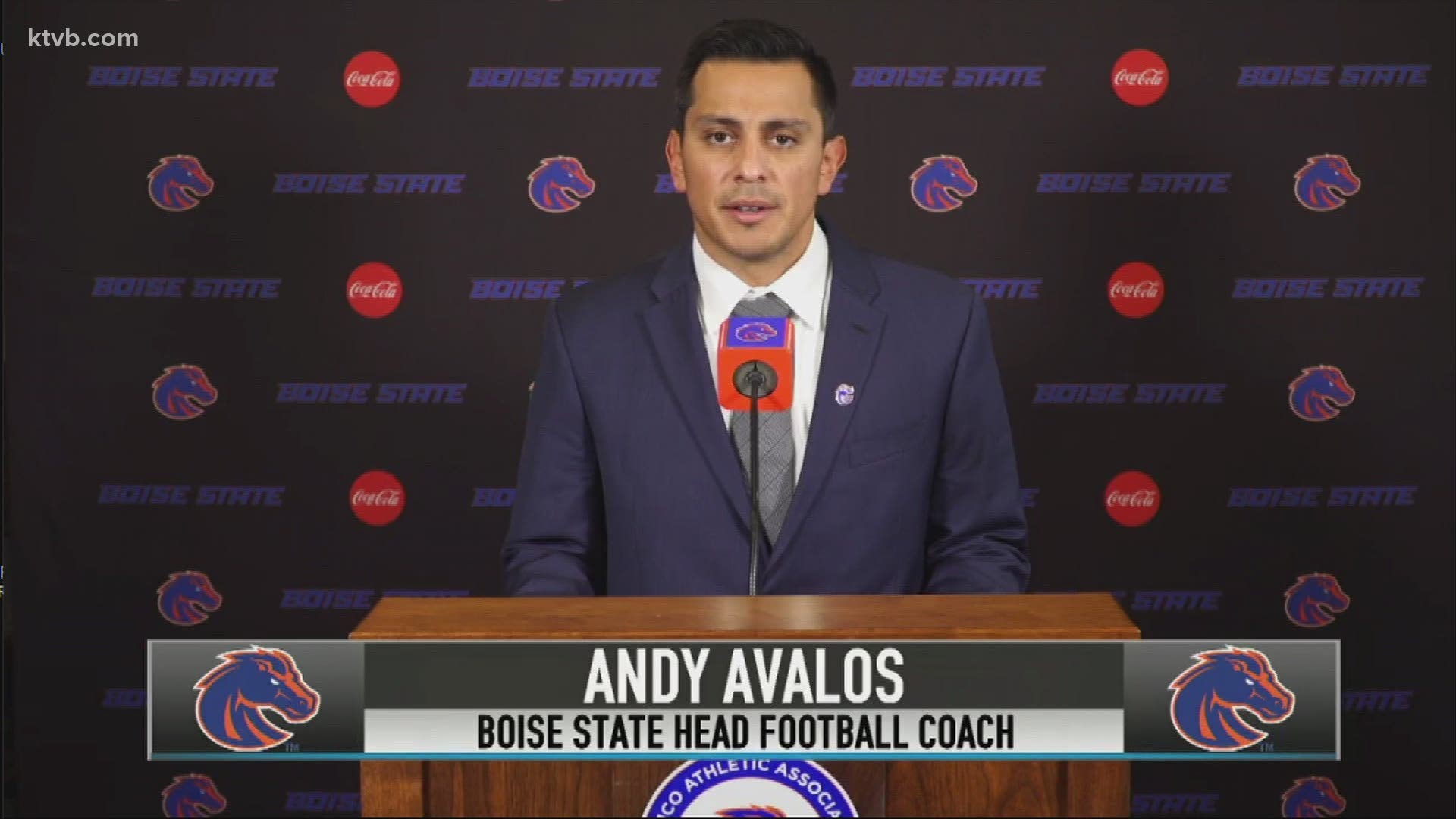 There are so many takeaways from Andy Avalos’ introductory press conference Sunday. To me, the first is how genuinely glad he is to be back in Boise. How did he react when he heard Bryan Harsin was off to Auburn?

“I had to take a deep breath, first off,” Avalos said. “I think everybody knows how passionate we are about the place.” The second is that Avalos totally ascribes to Boise State’s blue collar mentality, and that will be the base of everything he tries to instill into the team. In fact, he got a Lyle Smith reference in right off the top. “Blue collar isn’t one thing, he’s everything,” said Avalos. Then he talked about all four of the Broncos’ previous four head coaches: Dirk Koetter, Dan Hawkins, Chris Petersen and Harsin. Especially Hawkins, who he played for and who game him his first college coaching job.

NOTHING HANDED TO AVALOS

The Avalos hire was not a given. It just turned out that he was indeed the best man for the job. New Boise State athletic director Jeramiah Dickey reiterated that the process was important. “We are a national brand,” Dickey said. “We did a national search. We were not going to make a decision until we did our due diligence.” Dickey also stressed that Avalos wasn’t hired just because he is part of the Broncos family. But oh is that a bonus. And there’s this: Avalos becomes one of only six Hispanic head coaches in college football, and the significance of that is not lost on him. Race played no part in his hire, but I appreciated hearing his response to the story of a young Latino boy being inspired by him. “Obviously that hits my heart.” Avalos said. “That why we do what we do.”

It was a whirlwind 19 days for Boise State president Marlene Tromp between Harsin’s departure and Sunday’s press conference. There was angst among some fans, but Tromp pushed all the right buttons, from Chris Petersen’s input to the athletic director search committee to the quick but thorough process to find the best candidate for the Broncos job. She went 2-0 last week. One thing Tromp made clear: there was no offer made to Kellen Moore before he decided to remain with the Dallas Cowboys. “We conducted no interviews and made no offers until Jeramiah (Dickey) was in place,” she said.

Avalos no doubt has long had a list tucked away with names he’d like on his staff when the time came. He knows where the hidden gems are. And he’s tapped the first one, as Pete Thamel of Yahoo Sports reports that (according to sources) Boise State is hiring Tim Plough of UC Davis as offensive coordinator. Plough worked for Hawkins with the Aggies, so he won’t need too much of a crash course on Broncos culture. Plough, who was a finalist for the O-coordinator’s job at Baylor, over saw a UC Davis attack that amassed the most total passing yards in the FCS over the past three seasons.

There’s a lot of work to do right out of the gate, but the rest of Avalos’ staff is starting to take shape. He kept Spencer Danielson from going to Auburn, although he hasn’t officially tabbed Danielson as his defensive coordinator yet. Avalos has also hired Da’Vell Winters, who was the assistant director of player personnel at Oregon. Avalos hasn’t revealed Winters’ job title yet, but he could be “chief of staff,” the role Brad Larrondo handled before following Harsin to Auburn.

“Da’Vell is a man who can engage all people,” said Avalos. Not only does Avalos have to assemble his staff, he’s just 3½ weeks away from National Letter of Intent Day. Most of the recruiting class is already signed, but there are some holes to fill.

Avalos has some tough decisions to make regarding the members of Harsin’s staff who remain. And he’ll have to do some math as he brings in others from outside the program. Harsin’s first contract called for $2.2 million for nine assistants in 2014. The COVID-influenced pool will be $2.1 million for 10 assistants for Avalos in 2021, but the university has committed to increase it by $50,000 every year. Dickey isn’t particularly worried about football program funds right now. He repeated a line from his own introductory press conference a week earlier: “What we don’t have, we will go out and get.” Said Avalos of Boise State’s commitment to the program, “We feel way more than comfortable.”

The Boise State-Air Force game Friday night had the undercurrent of a San Jose State sequel when the Broncos went into halftime trailing by seven points. But then Abu Kigab, who was already in the midst of a solid game, took it up a notch. Kigab scored five unanswered points to begin the second half, igniting a 20-6 run and leading Boise State to an 80-69 win over the Falcons. Kigab ended with 25 points, 11 rebounds and five assists in what coach Leon Rice said “might have been one of his best games of his career.” To Kigab, it’s all about defense. “That's what we really take pride in that we’ve got to continue to take pride in and take even more pride in,” he said. “That defensive rebounding, we just have to be relentless with our defensive rebounding. You know, it's going to win us championships.”

So Boise State has now tied a school record with 10 wins in a row and is one victory short of the best conference start ever (7-0 in 1988). The Broncos know it’ll take some doing as they try to make history tonight at Wyoming. It’ll come at elevation 7,220, and it’ll be against Cowboys coach Jeff Linder, who was a Boise State assistant during Rice’s first six seasons at the helm. Linder, who has the Pokes at 7-2 in his first season since coming over from Northern Colorado, knows how Rice thinks and how he schemes. Boise State is the more talented team, but that isn’t everything, as they have learned the past 10 days. If they can get Emmanuel Akot back tonight, that would help. Akot missed Game 2 against Air Force with what was termed a tender Achilles. He is probably the Broncos’ best defender.

Alabama wins its fourth national championship in seven years with a wild 45-40 win over top-ranked and undefeated Clemson. Heisman Trophy winner Derrick Henry of the Crimson Tide rushed for 158 yards and three touchdowns to outduel the Tigers’ Heisman finalist, quarterback Deshaun Watson, who passed for 405 yards and rushed for 73 more. With his fifth national title (he also captured one in 2003 at LSU), Alabama coach Nick Saban was in the conversation with ‘Bama legend Bear Bryant as one of the greatest coaches ever.