Boise State has played 43 games against Nevada, more than any other opponent in its history. But the series has not been continuous, hence the faded rivalry. 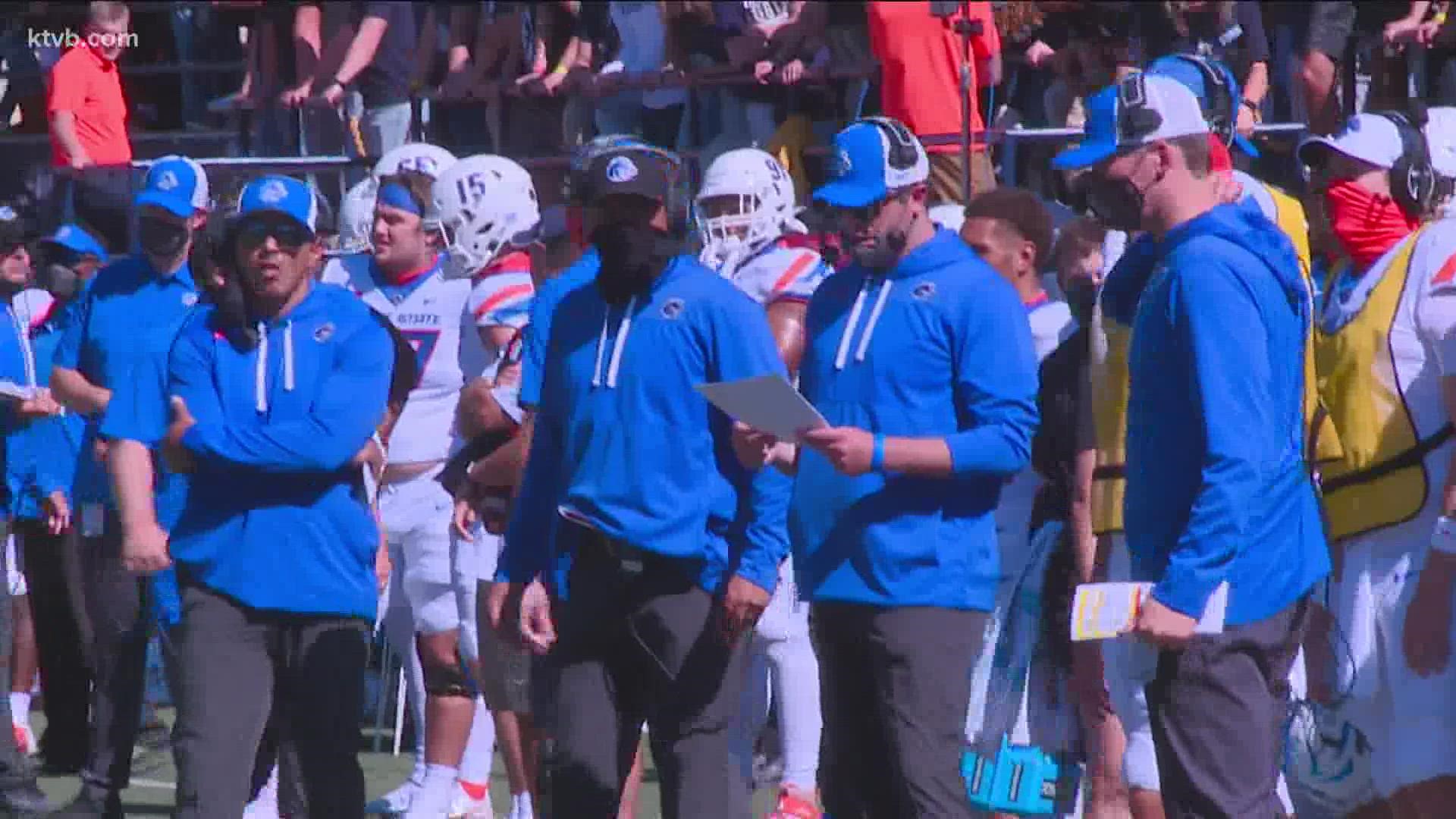 Boise State and Nevada were once fierce rivals, but the wind went out of those sails after the Mountain West went to divisional play in 2013. That meant the Broncos and Wolf Pack wouldn’t see each other in 2015 and 2016. And Saturday’s homecoming game is the first between the teams since 2018. Boise State and Nevada face off next year in Reno. For 35 years, that was the No. 1 road destination for Bronco Nation—to the point that Boise State fans essentially took over Mackay Stadium during games in the 2000s. The numbers were down a bit in that one-off game three years ago. The future of this series could go several ways. If Colorado State and Air Force go to the American conference, these teams could play annually again. If Boise State ever heads for the Big 12, they may never meet again after that.

Nevada’s Carson Strong will be the best quarterback on the field Saturday. It’s hard to dispute that. But it doesn’t mean Boise State can’t compete. The Broncos’ Hank Bachmeier displayed a dimension last week that the Wolf Pack is unlikely to match, doing damage with his legs. Not including two sacks, Bachmeier rushed five times for 54 yards in the win at Utah State. RPO means “run-pass option,” of course. And in the first three games, the “O” wasn’t exercised much. ut now that it’s part of Bachmeier’s game, it has to be respected. As good as Strong is, the RPO is an option he doesn’t have. Strong has had three surgeries on his right knee, including two in the last few months. He missed about a week of fall camp because of the lingering effects. Strong has been sacked five times for minus-33 yards this season.

THE ‘BROKEN RECORD’ KEY TO VICTORY

Boise State is still favored by 6½ points, but KTIK handicapper Lee Sterling of Paramount Sports, among others, doesn’t see it that way. Sterling picks Nevada, 31-27. Let’s circle back to the running game as we ponder that. The Broncos and the Wolf Pack have had similar struggles in that department. Boise State is 10th in the Mountain West in rushing at 88 yards per game, and Nevada is last at 77 per. It flip-flops on defense, as the Pack are 10th against the run at 188 yards per game, and the Broncos are last at 207 per. Watch that closely.

REALIGNMENT (OR NOT) TRACKER

Numerous sources say that on Thursday, Boise State and San Diego State told the Mountain West they intend to stay in the league. Key word would be “intend.” What it does mean is that neither school is interested in the American Athletic Conference, which would be a lateral move considering that conference’s departures. What it doesn’t mean is that the Broncos (or Aztecs) wouldn’t leave on a dead run if the Big 12 came a-calling. They’re going to wait it out. Air Force and Colorado State remain the AAC’s primary targets, with the Falcons “leading the charge in exploring a move,” according to Dennis Dodd’s sources at CBSSports.com. Meanwhile, B.J. Rains of the Idaho Press reports that the idea of expanding Albertsons Stadium to 48,000 may be on the table again in relation to the Big 12.

Boise State-Nevada is the Game of the Week in the Mountain West, with tomight’s BYU-Utah State contest in Logan a close second. The 13th-ranked Cougars are favored by nine points as the Aggies try to clean a lot of things up following their loss to the Broncos. The other game to watch is No. 18 Fresno State at Hawaii. The Bulldogs are 10½-point favorites, which doesn’t seem like much against the inconsistent Rainbow Warriors. But it’s going to be difficult to play halfway across the Pacific in a tiny facility with no fans in the stands. And UNLV proved last week that the Bulldogs can take nothing for granted.

This is a tough way for Idaho to open Big Sky play. The Vandals, 1-2, will be on the road for the third straight game tomorrow, facing 8th-ranked UC Davis and coach Dan Hawkins in Northern California. But this is one coach Paul Petrino has been waiting for. “This is a game we’ve been working up to since fall camp started,” said Petrino this week on Idaho SportsTalk. In fact, the Vandals dedicated some practice periods to Davis preparation during camp. And, of course, they’ve been on the UCD case for almost two weeks, as they’re coming off a bye. We’re still waiting on a verdict at quarterback. Petrino wouldn’t announce his starter (Mike Beaudry or CJ Jordan) on IST the other day. “Coach Hawkins likes to send out his depth chart in alphabetical order,” quipped Petrino. “So no, I don’t think I’ll do it right now.”

ANOTHER HOMECOMING DUEL IN THE VALLEY

There are two homecoming games locally on Saturday—the other is at College of Idaho, where the Coyotes host Carroll College in Simplot Stadium. The Yotes are back in the NAIA rankings at No. 23, while the Fighting Saints, once an NAIA power, are knocking on the door. These are two of the four teams tied atop the Frontier Conference at 3-1. According to C of I, there will be 84 Idahoans combined on the two rosters. Rocky Mountain High will have 12 former players in uniform, eight Coyotes and four Fighting Saints. It appears Jack Rice has settled in as the Yotes’ starting quarterback. Rice went all the way last week in the win at Eastern Oregon, going 16-of-30 for 207 yards with two touchdowns and no interceptions.

Boise State’s men’s basketball TV slate is out. There are lots of “TBAs” still on the schedule, especially in non-conference play. But we do know that 13 of the Broncos’ 18 Mountain West games are currently set for national telecasts of some sort. Six will be on FS1, the only network that commands any kind of audience. One non-league game is scheduled for ESPN2: the opener at the Charleston Classic against St. Bonaventure, a trendy Top 25 pick and the defending Atlantic 10 champion. If Boise State upsets the Bonnies, there could be one or two more on the higher-profile ESPN outlets.

On the final day of the season, the New York Yankees’ Roger Maris hits his 61st homer of the season, breaking Babe Ruth’s record of 60 set in 1927. It did come with an asterisk, as that was the first year of the 162-game season—Ruth accomplished his feat in 154 games. It’s a historic day involving Ruth. On this day in 1932, he made his famous “called shot” in Game 3 of the World Series. Ruth gestured toward the centerfield stands at Wrigley Field—then deposited Charlie Root’s next pitch into the centerfield bleachers to break a 4-4 tie with the Cubs. The Yankees went on to win the game, 7-5.