Boise State football: Coach of the Year No. 1 vs. No. 2 on Saturday

He lost a reigning Mountain West Offensive Player of the Year and an NFL Draft pick at running back and still ran the table in the Mountain West. It wasn’t enough. 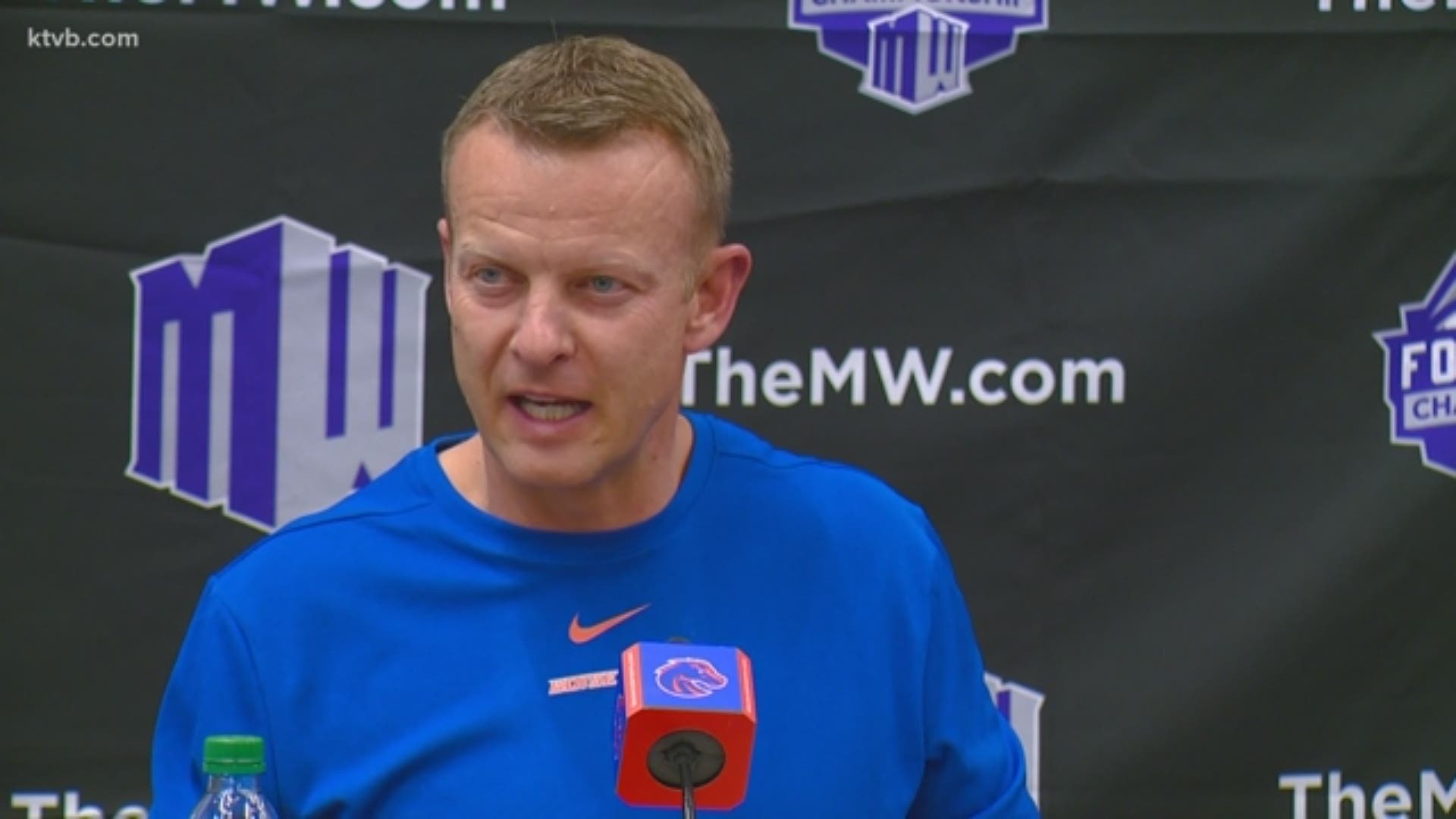 There were only two Boise State players on the All-Mountain West first-team offense, and only two on the first-team defense.  Let’s start there in making a case for why Bryan Harsin should have been conference Coach of the Year over Hawaii’s Nick Rolovich.  The offensive guys were tackle Ezra Cleveland and guard John Molchon.  Not a single skill player, yet the Broncos led the league in scoring and were second in total offense (and, oh by the way, went 8-0 in conference).  The defensive first-teamers were Curtis Weaver and Kekaula Kaniho.  It seems like Harsin never gets the award because other coaches figure he’s “supposed to win.”  Well, he’s only “supposed to win” because of his program’s sustained success year after year.  Harsin and his staff recruit the best players, and they were forced to use of a lot of ‘em this season.

Not that there was an anti-Boise State conspiracy, as Weaver was named Mountain West Defensive Player of the Year, Avery Williams was Special Teams Player of the Year, and George Holani was Freshman of the Year.  Weaver, as the conference’s season and career leader in sacks, was a pretty easy choice.  But there was competition for Williams’ and Holani’s awards.  Back to gripes: John Hightower, a second-teamer, should have been a first-team All-MW wide receiver.  Hightower didn’t have the receptions the other guys had, but he had the most yards-per-catch and put up demoralizing big plays against almost every team in the league.  Khalil Shakir was a victim of numbers, too.  Despite being a feared playmaker, Shakir was only honorable mention.

Boise State was down to not only its third-team quarterback again last week (although he’s now first-team), the Broncos went three-deep to find a starter at safety as well.  And it may happen in the title game Saturday versus Hawaii.  Tyreque Jones filled in for the injured Jordan Happle, who had been filling in for the injured DeAndre Pierce.  The Colorado State game was vindication for Jones, who had taken some heat for the trick plays that did the Broncos in at BYU.  His first-quarter pick altered the flow of the game.  “That was a huge interception,” said Harsin.  “He’s worked so hard to make that happen.  You don’t see all the hours he’s put in after practice catching balls.”  Another unsung stepper-upper: linebacker Benton Wickersham, who’s been filling in since Zeke Noa was injured back on September 20.

Boise State athletic director Curt Apsey spoke out about Wednesday about the new College Football Playoff rankings.  The gist of it: “I think there’s a lack of respect for the conference we’re in right now,” as the Broncos are No. 19 in the rankings, just one spot ahead of a two-loss Cincinnati.  Apsey and Mountain West commissioner Craig Thompson said the problem they have is not with the Bearcats, but with No. 17 Memphis.  Interesting tactic.  I still think Cincy is a big issue.  Apsey noted that Boise State doesn’t go around tooting its own horn all the time and prefers to “do its talking on the field.”  Alas, Caves & Prater asked Dr. Jerry Palm on IST if American commissioner Mike Aresco’s incessant lobbying helps his conference.  “I don’ t think it matters to the committee,” said Palm.  “Politicking doesn’t matter to them.

One of the phrases of the week is “a mutual separation.”  That’s what coach Mike Bobo’s arrangement is described as at Colorado State, as he is out in Fort Collins.  Brett McMurphy of Stadium tweeted that CSU’s buyout “was negotiated down from $5.5 million to $1.82 million.”  That’s a precipitous drop.  Bobo went 7-6 in each of his first three seasons, and fans felt the Rams were in a rut.  Then he was 3-9 last season and 4-8 this season.  Bobo was also winless in three bowl games, the last one being the wild 61-50 loss to Idaho in the 2016 Famous Idaho Potato Bowl.  Bobo follows UNLV’s Tony Sanchez and New Mexico’s Bob Davie out the Mountain West door.

Now that Chris Petersen has stepped down at Washington, let’s check one branch of the his coaching tree.  Montana State has a heavy Boise State flavor on its staff as the 9-3 Bobcats host Albany Saturday in the second round of the FCS Playoffs.  Petersen’s former special teams and running backs coach with the Broncos, Jeff Choate, is in his fourth season and is 26-21 in Bozeman.  Choate is also coming off a 48-14 rout of bitter rival Montana.  On his MSU staff are three former Boise State stars who played for Petersen: offensive coordinator Matt Miller, defensive line coach Byron Hout and tight ends coach Nate Potter.  Four Big Sky teams—Montana, Sacramento State and Weber State are the others—made the FCS Playoffs this year, and all four received first-round byes.

CUTTING THE BRONCOS SOME SLACK

You could say Wednesday night’s Boise State game at New Mexico was a throwback to last season’s close-game woes.  But that would be unfair to the Broncos, whose gutty effort fell short in an 80-78 loss to the Lobos.  UNM’s elite inside game tore up Boise State, but the Broncos bombed away from the outside from the get-go, nailing 14 three-pointers.  Six of them came from Justinian Jessup, who led the team with 24 points.  If you ask Boise State coach Leon Rice, the difference in the game were two crucial late misses on the front end of one-and-ones.  Rice came back to that three times on the KBOI postgame show.  Derrick Alston had one of them with 2½ minutes left, and Alex Hobbs had the other with 1½ remaining.  The last five meetings between the Broncos and Lobos have been decided by a total of 12 points.

HUGE ONE OUT OF THE GATE

Things were not looking good for the Boise State women against New Mexico Wednesday night in ExtraMile Arena.  The game was in overtime, and the Broncos had not scored in the extra period and were trailing by five points with under a minute left.  Then came one three-pointer by Riley Lupfer with 56 remaining and another from Mallory McGwire with 11 ticks on the clock, and Boise State took down the Lobos 83-82.  McGwire was tremendous for the Broncos, scoring 21 points and pulling down 17 rebounds.  Hard to call anything pivotal in the first week of December, but that was a big, big Mountain West win.

Allen buried the Idaho Steelheads with four first-period goals Wednesday night in CenturyLink Arena, and there was no recovering from it.  The Americans outskated the Steelheads 6-4, continuing the Steelies’ current struggles.  Brett Supinski scored two goals for Idaho.  And the Boise State women’s volleyball team opens play tonight in the National Invitational Volleyball Championship in Laramie.  The 18-11 Broncos’ first-round opponent is Weber State of the Big Sky, which finished the regular season 24-8.  This marks the third time in the last four years that Boise State has reached the postseason.

The NFL awards a franchise to Seattle for the future Seahawks.  The price tag was $16 million for a group led by Lloyd W. Nordstrom.  The Seahawks would debut in the Kingdome August 1, 1976, with an exhibition game against the San Francisco 49ers.  Inspired by the skills of new players such as Jim Zorn and Steve Largent, no one seemed to care much that the team lost its first five regular season games.  Seattle was an NFL city at last.