Boise State has a history of one-time walk-ons who become fan favorites through sheer grit. The latest had to fill in for the Broncos’ best defensive player at BYU. 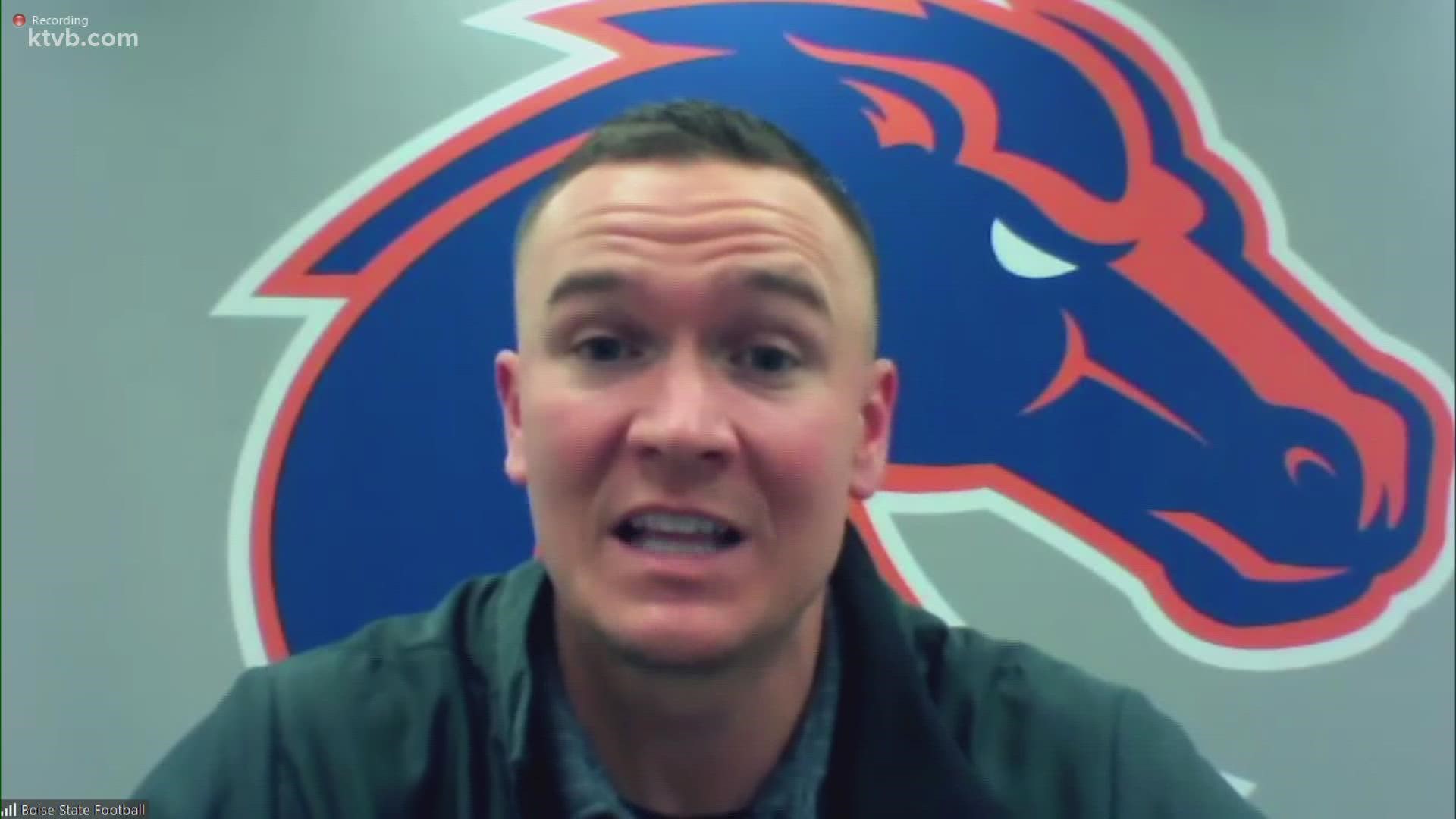 Alexander Teubner picked a heckuva time to get his name on TV. The sophomore, a former walk-on, was all over ABC Saturday afternoon as Boise State upended No. 10 BYU in Provo. Teubner was a key part of the turnover parade, forcing one fumble on special teams and recovering another after he was pressed into duty in place of the ejected JL Skinner. So who is Alexander Teubner? He’s not from California or Texas. He’s a 5-11, 194-pounder from Seaside, OR, where he was the Cowapa Conference Offensive Player of the Year as a junior and senior. Teubner rushed for more than 4,000 yards during his final two seasons. In Boise, he’s now something of a folk hero. He kind of reminds me of special teams dynamo Ia Falo out of Mountain Home in the late 2000s, but Teubner might have more upside at this point.

As Kekaula Kaniho’s little brother, we were already a bit more familiar with Kaonohi Kaniho. The Boise State cornerback has been named Mountain West Freshman of the Week after finishing the BYU game with a victory-clinching interception. Kaniho was called upon as a third-string corner when Damon Cole was injured in the first quarter in Provo. His stint started with the Cougars’ 6-4 Samson Nacua going over the top of him for a touchdown catch. But by the time it was over, in addition to his pick, Kaniho had five tackles—two of them on third-down stops.

Had Boise State lost at BYU Saturday, you could have seen this week’s Air Force game being relegated to the airwaves of FS2 and its miniscule audience. But the rejuvenated Broncos will face the Falcons in prime time on FS1, and with the Academy riding a 5-1 start for the first time in 11 years, the game will have some juice. Air Force is just as you remember it. Coach Troy Calhoun doesn’t call the Falcons offense the “triple-option,” but most everybody else does, and it leads the nation in rushing for the third straight week at 341 yards per game. And it’s a double-edged sword this week—Air Force also leads the Mountain West and ranks 13th nationally in scoring defense, allowing just 16.2 points per game.

YES, THERE ARE INJURIES

The only real clue you get from Boise State regarding injuries is when a player disappears from the depth chart. And there are four of them this week. The euphoria of the win at BYU is tempered by the fact that cornerback Markel Reed, offensive guard Garrett Curran, center Kekani Holomalia-Gonzalez and defensive tackle Divine Obichere are no longer listed anywhere. Reed’s injury is the only one coach Andy Avalos confirms as season-ending. Reed had 21 tackles, 1.5 for loss, and a pass breakup going into the BYU game. Caleb Biggers, the Bowling Green transfer, will take that spot.

How thin is the Boise State offensive line? With Curran and Holomalia-Gonzalez gone, sophomore Jacob Golden is backing up three different positions right now: left tackle, right guard and right tackle. Indications are that George Holani will remain out, so cross your fingers for Cyrus Habibi-Likio healing up by this Saturday. And the Broncos could use CT Thomas, who has had two consecutive 100-yard receiving games against Air Force. Thomas also missed the BYU game.

MATTISON ROLLS, BUT NOT WITHOUT A ROLLERCOASTER

Two former Boise State stars to mention out of Week 4 in the NFL. One is Alexander Mattison, who was called upon to fill in for Dalvin Cook in Minnesota for the second time in three weeks. Mattison rushed for 113 yards on 25 carries and had seven receptions for 40 yards and a touchdown in the Vikings’ 19-17 win over Detroit. But he fumbled with less than two minutes left, and the Lions cashed in with a touchdown and two-point conversion that gave them the lead. It took a 54-yarder by Minnesota’s Greg Joseph as the clock ran out to save it. In Dallas, Cedrick Wilson was at Kellen Moore’s offensive buffet, and he took one of everything. Wilson had one catch for 35 yards, one rush for six yards and a first down on a fourth-down attempt, and one pass completion for 22 yards in the Cowboys’ 44-20 win over the Giants.

ANOTHER NATIONAL NOD FOR A YOTE

College of Idaho has its third NAIA National Player of the Week of the 2021 season. Defensive end Keegan McCoy, the former Capital Eagle, has earned the honor after winning the Coyotes’ game at Montana Tech Saturday on a 40-yard fumble return for a touchdown. Earlier in the fourth quarter, McCoy sacked Orediggers quarterback Jet Campbell, forcing a fumble that led to a Yotes TD drive as C of I rallied from a 23-14 deficit.

NO INDUCTION THIS MONTH, BUT BATES IS ON THE PODIUM

It was announced on October 1 that the Boise State Athletic Hall of Fame induction ceremony, scheduled for this Friday night, has been postponed again due to COVID. It could have put a damper on Emma Bates’ month, but the former Broncos distance running star had some big things on her calendar already. On Sunday, Bates made her first World Marathon Major podium, finishing second at the 2021 Chicago Marathon. Bates was the first of six American women to cross the finish line in the top 10, clocking in at 2:24:20, a personal best. Bates won the NCAA women’s 10,000-meters championship as a Bronco in 2014.

Toronto’s Auston Matthews delivers an NHL debut for the ages. Matthews scored on his first three shots against Ottawa to become only the fifth player to notch a hat trick in his first game. Then the 19-year-old scored a fourth. Nobody had ever done that before. But alas, it wasn’t enough, as the Maple Leafs lost to the Senators in overtime, 5-4. Matthews, from Scottsdale, AZ (of all places), had been chosen first overall in the NHL Draft the previous June.