For four seasons, Khalil Shakir has been worth the price of admission at Albertsons Stadium all by himself. There is one last chance to see him on the blue turf. 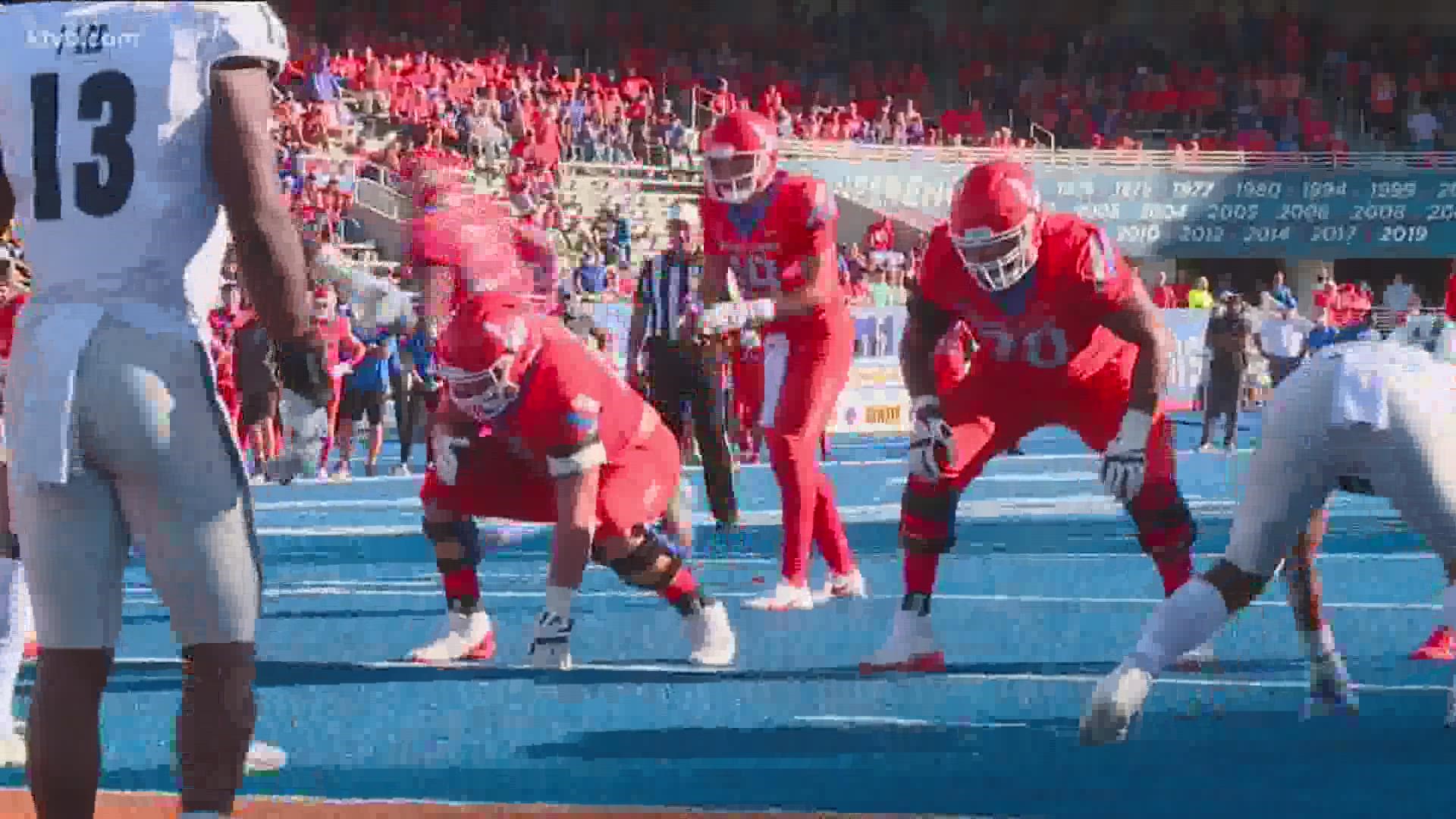 Khalil Shakir is five catches short of becoming the sixth Boise State player in history to make 200 career receptions. Hopefully he’ll do it Saturday night against New Mexico on the blue turf, because he confirmed Wednesday that’ll be his final game there. His mom, Mona Tuamoheloa-Shakir, always active in the Twitterverse, kind of confirmed it, too. “I’m excited and sad at the same time,” she posted. It’s a cliché, but Shakir has been a human highlight reel in his four seasons as a Bronco. He’s also been a Swiss Army knife—this year as much as any. We saw the signs early, as Shakir’s very first touch for Boise State was not a catch, but a run (albeit an 11-yard loss on a reverse at Troy in the 2018 opener). He hasn’t had a play lose that many yards since. Not even close. Shakir’s first touchdown came on a run, too.

Here are some of Shakir’s biggest checkpoints (and I know I’m leaving some out). He made the big third quarter touchdown catch at Florida State in the 2019 opener that turned the game around. Shakir made one of his circus catches for a 35-yard fourth-quarter gain at Colorado State at the end of that season, leading to a touchdown when Boise State was still hanging on to a three-point lead with the division title on the line. He then dominated in the Mountain West championship game. Shakir was all the offense the Broncos had in the 51-17 loss to BYU last year. This season he’s made an acrobatic grab almost every game, the last one coming on a TD at Fresno State that gave the Broncos a 23-7 lead. Where would this team be without Khalil Shakir?

WILL THEY STAY OR WILL THEY GO?

Safety JL Skinner was non-commital Wednesday when asked if he’ll return for his senior year at Boise State. But most agree that as good as Skinner has been this fall, he needs more seasoning before he entertains the NFL Draft. Running back George Holani said he’ll be back in 2022. That’s good news for the Broncos. Holani knows that he needs to add to his body of work, which has been interrupted by injuries the past two seasons. There’s one “super senior” who everyone now realizes could return for another season. Wide receiver Octavius Evans only played in two games last season, enabling him to utilize a redshirt year. So technically Evans hasn’t used that extra year of NCAA eligibility due to COVID. And center Donte Harrington, thanks to a medical redshirt year and COVID, could come back for a seventh season in 2022.

Yes, it’s too early to be talking about this, because things will change weekly between now and bowl season. But it gives you some water cooler talk. Stewart Mandel’s latest bowl projections at The Athletic have Boise State playing in the Frisco Bowl in Texas on December 21 against Coastal Carolina. The Broncos would likely be underdogs in such a matchup—the Chanticleers had spent all season in the Top 25 until they lost 42-40 to Georgia State last Saturday. If Boise State beats New Mexico Saturday night, chances would be slim to none that the Broncos would stay home for the Famous Idaho Potato Bowl for the first time in 16 years (they may have been slim to none either way).

Chris Vannini of The Athletic, one of the most thorough Group of 5 beat writers out there, had this answer for a reader who asked about SMU’s chances of being invited to the Big 12. First of all (to paraphrase here): “No.” Secondly, wrote Vannini, “It’s not a guarantee anymore that G5 schools get a Power 5 invite. Memphis and Boise State are probably at the top of the G5 list, largely because of their TV ratings (along with the recent track record of success), but they might not be the first choices of the Big 12, which could try to target some Pac-12 schools depending on the landscape.” Colorado and Utah? Arizona and Arizona State? I don’t see any of those moving with Cincinnati, Houston, UCF and BYU joining the Big 12. Especially Utah.

Boise State men’s basketball is off to a forgettable start from three-point range this season. The Broncos were just 7-for-42 over the first two games. That’s 16.7 percent. They’ll have to flip that script to have a shot this afternoon as they open the Charleston Classic against No. 22 St. Bonaventure, which is in the Top 25 for the first time in 50 years. Double that accuracy, and Boise State would be at 33 percent, and that still might not be good enough. We know these guys can hit three-pointers. Marcus Shaver Jr. shot just under 40 percent from deep last year. Add in the numbers from Devonaire Doutrive, Emmanuel Akot and Abu Kigab, and the group was near 35 percent. It’s still early.

The Idaho men are set for their first marquee opponent in the new ICCU Arena tonight in the 277th Battle of the Palouse against Washington State. The Vandals are obviously much improved over last season’s 1-20 team; they fell by just seven points, 69-62, at Fresno State Monday night. The Northwest Nazarene men won in Caldwell for the first time since 2012 Wednesday night, beating College of Idaho 80-70 in the first leg of the United Heritage Mayors’ Cup. George Reidy led the Nighthawks with 18 points. And the C of I women’s soccer begins play today in the NAIA Tournament Opening Round. The fourth-seeded Yotes make their second straight appearance in the event with a game against top-seeded Keiser today in West Palm Beach, FL.

ON THE PRO FRONT

The captain steered the ship Wednesday night for the Idaho Steelheads, as A.J. White tallied midway through the third period to give the Steelheads the ultimate winning goal in a 3-2 victory over the Adirondack Thunder in Idaho Central Arena. It’s the first time this season the Steelies, 7-5, have been two games over .500. And Troy Merritt is in the field for the last PGA Tour event before Thanksgiving break, the RSM Classic at Sea Island, GA. The former Boise State star has made three of four cuts so far this season and has two top 20 finishes.

On Boise State’s Senior Night, junior running back Jeremy McNichols becomes the first Bronco ever to log three 200-yard rushing games in the same season. McNichols ran for 206 yards and a career-high four touchdowns, his nation’s-best 23rd consecutive game with a TD, as Boise State beat UNLV 42-25. It would be his final appearance on the blue turf as well, as he would forego his senior year to enter the NFL Draft. The win was the Broncos’ 10th of the season, marking the 14th time in 18 years they had reached double-digits.