Boise State isn’t exactly going into the biggest game of the season at 100 percent this Saturday night in Logan, but the door could be swinging both ways. 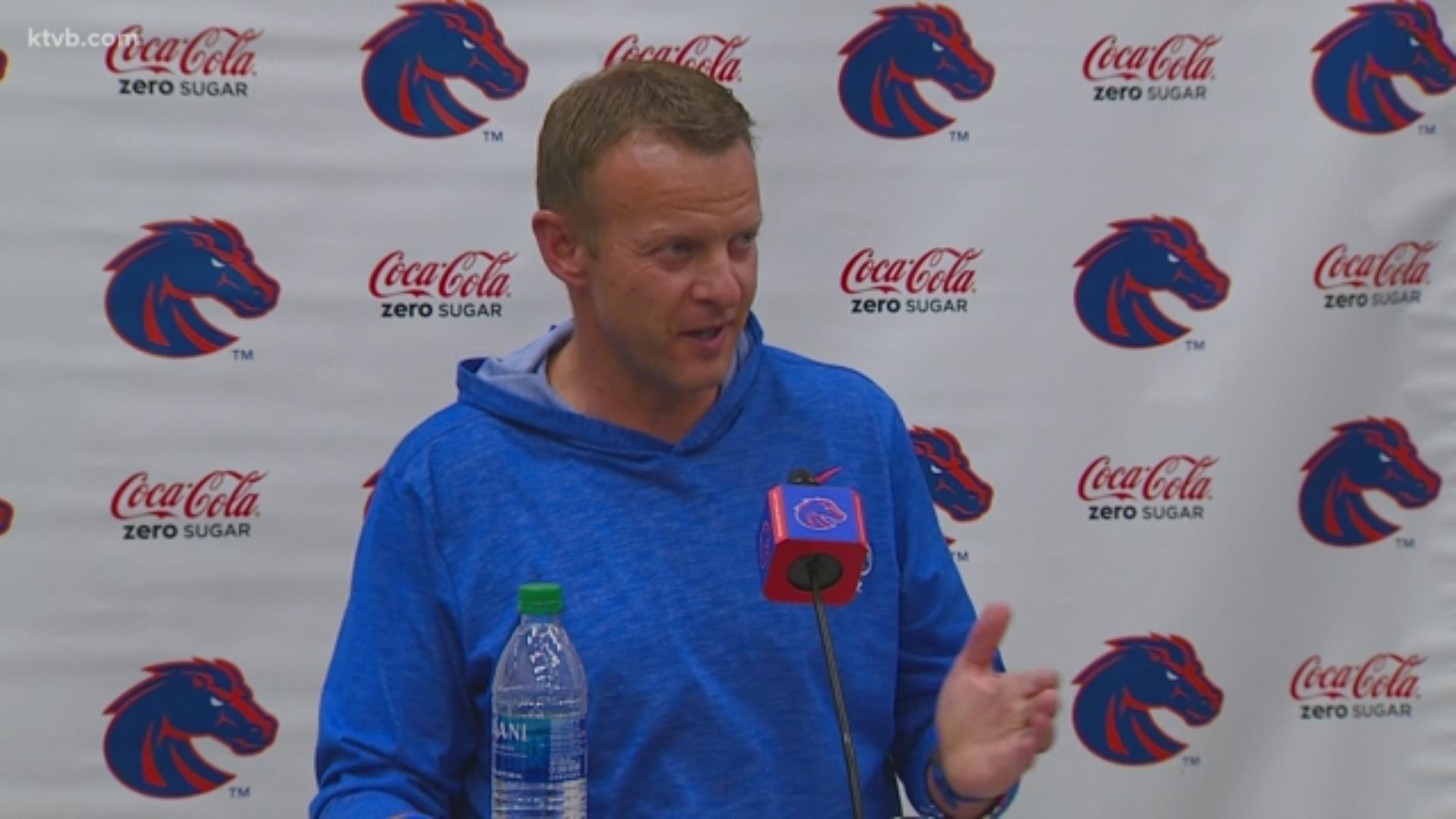 What team will Boise State put on the field against Utah State this Saturday night?  We know nothing more than we did after the New Mexico game.  Absolutely nothing.  That’s the unfortunate reality of college football in 2019.  Broncos coach Bryan Harsin provided no injury updates at his Monday press conference.  Are Hank Bachmeier and Chase Cord still sidelined at quarterback?  How about Robert Mahone at running back?  John Molchon and Eric Quevedo on the offensive line?  Superstar Curtis Weaver and backup Jabari Watson at the STUD position?  On the subject of Weaver, Boise State has a really good defensive front, but you don’t easily replace a guy who is third in the nation in sacks and the Mountain West career leader in that category.

If I had told you before the season that the first Boise State quarterback to earn Mountain West Offensive Player of the Week honors this year would be Jaylon Henderson, you would have said…what?  Henderson won the award Monday for his performance against New Mexico in the first start of his career.  You really don’t have to go beyond the first drive of the game, which started on the Broncos’ three-yard line.  Henderson put it in the air on the first play for a 16-yard completion and engineered a 97-yard touchdown drive while going 4-of-5 for 81 yards.  He would lead Boise State to TDs on its next two drives as well.  In the transfer portal era, how many FBS teams can go three-deep at quarterback?  The Broncos are very fortunate.

QUARTERBACK MYSTERY IN LOGAN, TOO

As wounded as Boise State appears to be right now, Utah State has its own issues.  USU star quarterback Jordan Love left the 26-21 win over Wyoming Saturday late in the third quarter and did not return.  At the end of one possession, Love ran, was hit, and fumbled.  He returned for the next drive, threw one incompletion, and came out.  So what happened?  After the game, Aggies coach Gary Andersen said, “I can’t talk about that.”  He couldn’t talk about it at his Monday press conference, either.  Love threw for 282 yards and two touchdowns before departing, but he also tossed two interceptions, including a pick-six.  His status for this week is a huge question that begs to be answered (but won’t be).

Another key spot for Utah State is linebacker, where David Woodward, a third-team 2018 AP All-American, is lost for the season.  But here we have a story similar to that of Jaylon Henderson.  Junior Eric Munoz made his first career start Saturday in place of Woodward, and he is the Mountain West Defensive Player of the Week.  Munoz logged 13 tackles against Wyoming and made two interceptions.  The first pick was returned 51 yards to set up a USU field goal, and the second sealed the game as the Cowboys were driving with just over a minute left in the game.  Munoz was a walk-on junior college transfer who had played in only two of the Aggies’ first eight games—and only on special teams at that.  There are some mirror images between these two teams.

IF IT COMES DOWN TO A FIELD GOAL

Boise State’s Eric Sachse has always wanted to kick a walk-off field goal in an FBS game.  This would be the game to do it—it could be that close.  Sachse’s counterpart at Utah State could do it, too.  Dominik Eberle is a really, really good kicker.  And guess what.  Eberle is the Mountain West Special Teams Player of the Week.  Eberle booted four field goals against Wyoming, from 47, 44, 26 and 23 yards away.  On the other hand, it does demonstrate a USU problem with stalled drives.  The first kick broke a tie between Eberle and Utah’s Louie Sakoda for the most field goals made in Mountain West history.

Former Boise State star Jay Ajayi was active for Philadelphia Sunday but didn’t play in the Eagles’ 17-10 loss to New England.  The former Boise State star, who hasn’t played in more than 13 months and was out of work for the first 10 weeks of the NFL season, worked out with the Eagles last Friday and was signed by the club.  Ian Rapoport of NFL.com tweeted Monday that Ajayi’s contract with Philadelphia “includes a right of first refusal for the team during the 2020 offseason, source said.  That means Philly can match any offer Ajayi receives.”  The Jay-Train, of course, was a key part of the Eagles’ run to the Super Bowl title after the 2017 season.  He had rushed for 184 yards and three touchdowns when he tore his ACL in October of last year.

The Boise State men’s and women’s basketball teams rarely play doubleheaders anymore, much less against marquee opponents.  It’s happening Wednesday, though, as the Bronco women host Washington State in ExtraMile Arena, followed by the men versus BYU.  Boise State is 3-1 on the women’s side, and you can argue that two of the wins are quality ones (Portland State and BYU).  The men have an early barometer for how things might be for them in the Mountain West race.  The Cougars lost 76-71 to San Diego State in the Marriott Center 10 days ago.  BYU is coming off a buzzer-beating 72-71 win at Houston last Friday.

COYOTES SEEK TO EVEN UP THE CUP

A week ago, the College of Idaho blasted out to a 23-11 lead on Northwest Nazarene at the Johnson Sports Center before the roof effectively caved in.  The Nighthawks clamped down and won the first leg of the United Heritage Mayors Cup series 66-57.  Since then NNU has won twice more at home, downing Colorado Christian and Texas A&M Kingsville to move to 3-0.  The Nighthawks and the 4-1 Yotes play Game 2 of the Mayors Cup tonight in the J.A. Albertson Activities Center, wrapping up the 2019 edition of the state’s oldest basketball rivalry.  It all started back in 1933, with C of I winning 23-16.

Word is that the Northwest League will shrink from eight teams to six in 2021 if minor league contraction takes effect.  And a list first revealed by the New York Times says the Salem-Keizer Volcanoes and Tri-City Dust Devils are on the chopping block.  Also facing elimination is the entire Pioneer League at the rookie-level, including the Idaho Falls Chukars.  Under the new plan, the Northwest League season would expand to 134 games from the current 76, with the season beginning in mid-to-late April and ending around Labor Day.  Unless there can be some kind of interleague play arranged, the Boise Hawks will be facing the same five teams over and over.

In a winner-take-all game for the Big Sky championship, Boise State and Idaho face off before a record crowd at Bronco Stadium.  The Broncos jumped out to a 13-0 lead behind Tony Hilde and Ryan Ikebe—then hung on to beat the Vandals 27-24, ending Idaho’s amazing 12-game winning streak in the rivalry.  It capped off a 10-1 regular season under Pokey Allen and gave Boise State its first league title since 1980.