Boise State football: Now, about that other streak

Boise State has won three of its past four games, but all three victories were on the road. The loss was, you know, in Albertsons Stadium. 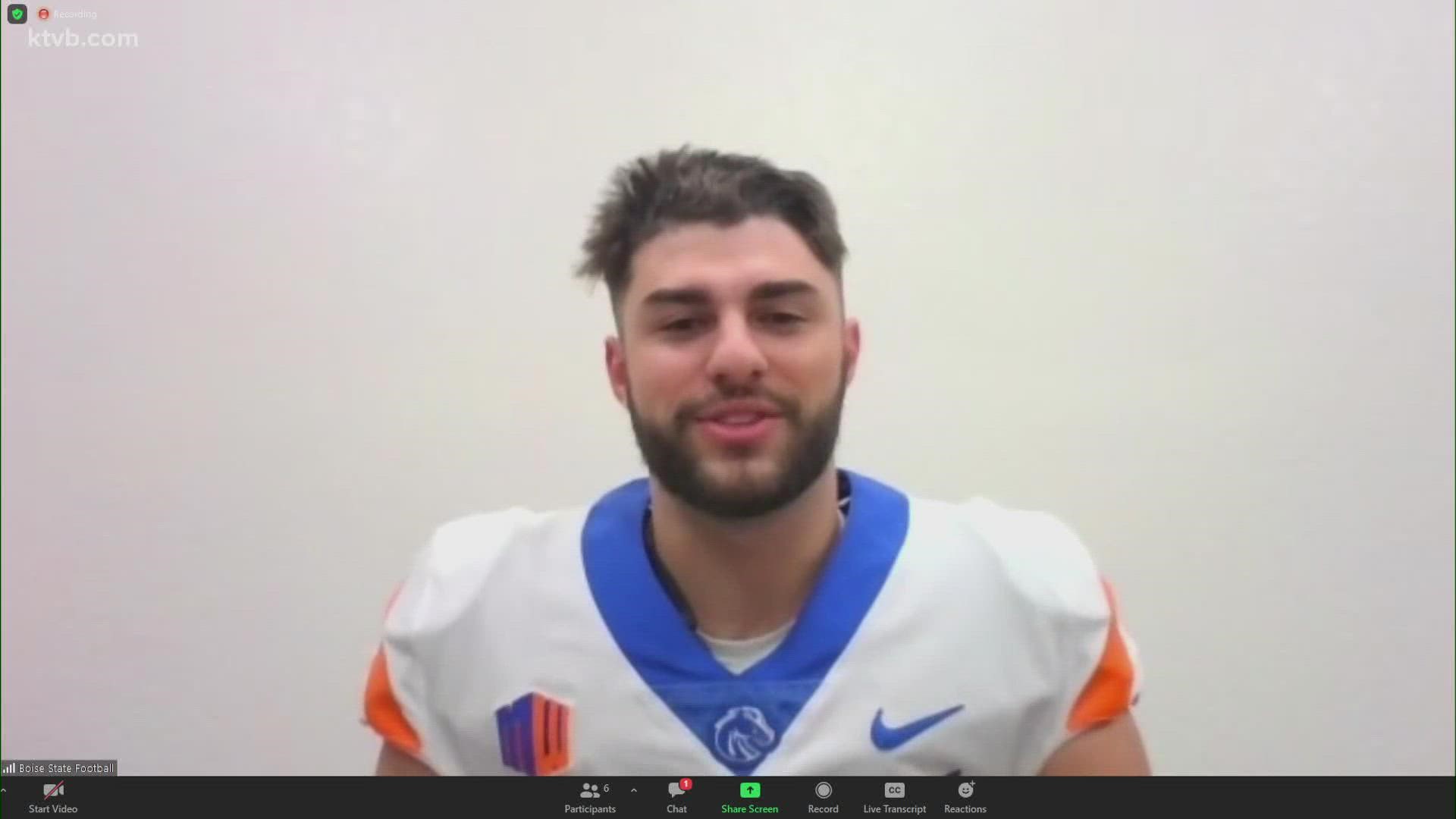 Okay, Boise State has won 14 consecutive Mountain West games on the road and four straight on the road overall. The Broncos have defeated two Top 25 teams on the road in the same season for the first time ever. It’s easy to say your team “shoulda won” a particular game. But were it not for an official’s mistaken whistle against Oklahoma State, Boise State “woulda won” a third game this season over a ranked team. Think about what that would have meant. But now the Broncos return home Friday night to host Wyoming, and you know exactly what’s staring them in the face: their first three-game losing streak on the blue turf in 25 years. One of the primary mantras of Boise State football is “Protect The Blue.” The Broncos will attempt to do that against a Cowboys team that has never won in Boise.

Boise State kicker Jonah Dalmas is not only the Mountain West Special Teams Player of the Week—just the Broncos’ second conference award of any kind this season—he’s also one of three national Lou Groza Award “Stars of the Week.” Dalmas has now made 11 straight field goals,tied for the fourth-longest active streak nationally, after going 4-for-4 (5-for-5 if you include the one taken of the board) in the takedown of Fresno State Saturday. The Groza semifinalist is 26-for-29 in his career; the percentage of 89.7 is second in the country among active kickers. Voice of the Broncos Bob Behler mentioned Monday on Idaho SportsTalk that Dalmas is going to carry the Hammer out of the tunnel this Friday night against Wyoming. Good choice.

GREEN WAS GREEN IN FRESNO

One of the surprises in the Fresno State game was true freshman quarterback Taylen Green’s appearance in the second quarter. Boise State offensive coordinator Tim Plough created a one-series package for Green and put him in late in the first quarter. “We wanted to do a different look in the run game with him,” Plough told the media Monday. It looked genius on the first play when Green busted off a 17-yard run. But then he lost three yards when Plough said he should have handed off. After a positive gain of three on the next play, Green was gobbled up on a 16-yard sack to end the cameo. One play made a lot of sense at that point in the game (the Broncos led 10-0), but a whole series? Not so much. Green has now played in two games and has a max of two more to play to retain his redshirt year.

Boise State men’s hoops gets out of the gate tonight against Utah Valley in ExtraMile Arena, and the Broncos anxiously await a full season of Devonaire Doutrive. The transfer from Arizona didn’t get to play until January 6 last winter and played 18 games from there, averaging 8.9 points and 3.1 rebounds while shooting 48 percent from the field and 35 percent from three-point range. Doutrive started strong, highlighted by 38 points in a two-game sweep at Wyoming. He was quiet in the middle of the Mountain West season, but he finished by averaging 10.5 points over the final six games. Doutrive played 23 minutes per game last season—as a full-time starter now, he’s poised for a lot more this season.

One of the best players you’ll see come through Boise this season will suit up for Utah Valley tonight. He’s reigning WAC Player of the Year and WAC Defensive Player of the Year Fardaws Aimaq. And he’s only a sophomore. Aimaq, a 6-11 center, became the first NCAA player in 40 years to average 15 or more rebounds per game last season, hitting that number on the button. Aimaq added 13.9 points and 1.7 blocks per game. The Wolverines went 11-11 last season but were 9-4 in the WAC, earning a share of the conference regular season title. UVU is coached by Mark Madsen, who took over the program two years ago after six seasons as an assistant coach for the L.A. Lakers. Madsen was a two-time NBA champion as a player with the Lakers two decades ago.

Many are already aware, but in case you aren’t: One of the coolests pieces of video you’ll see this year is former Boise State coach Chris Petersen and former Oklahoma coach Bob Stoops sitting down to reminisce about the 2007 Fiesta Bowl. It’s on the Fox College Football site, and you’ve got to admit that Stoops is a pretty good sport to do it. But he likes Coach Pete. Here are some highlights. Stoops told his wife on the flight home, “You do realize—we’re going to see those last couple plays the rest of our life.” Petersen on the hook-and-lateral with 18 seconds left in the fourth quarter: “There really wasn’t another call. It’s fourth-and-18.” He said he wanted to go for two points right then, but changed his mind. And Stoops on his thoughts after Vinny Perretta’s halfback pass to Derek Schouman: “Is this really happening?”

Matt Paradis, who went from eight-man football to the NFL as one of the great pro football stories in Boise State history, is now at a crossroads after he tore his ACL in the Carolina Panthers’ 24-6 loss to the New England Patriots on Sunday. Paradis is out for the season, and he made have to start over in 2022, as he’s in the final season of his contract with the Panthers. Carolina has to recognize his value, though, as the former Council Lumberjack has played virtually every snap at center over three seasons since joining the team as a free agent from Denver. Paradis just turned 32 last month and is in his eighth NFL season since being drafted in the sixth round by the Broncos in 2014.

How many former Boise State assistants are left on the Washington staff? There are five. One of them, head coach Jimmy Lake, has been suspended without pay for one game after the sideline incident that showed Lake striking linebacker Ruperake Fuavai’s helmet during the Huskies’ 26-16 loss to Oregon on Saturday. Another, defensive coordinator Bob Gregory, will be acting coach this week against Arizona State. The other former Bronco coaches from UW’s Chris Petersen era are running backs coach Keith Bhonopha, offensive line coach Scott Huff and wide receivers coach Junior Adams. Former Boise State strength and conditioning coach Tim Socha is also on the Huskies staff. It was Gregory who was the Broncos’ acting coach in the 2013 Hawaii Bowl after Petersen left for Washington.

About 12 hours after Joe Paterno announces his retirement effective at the end of the season, the Penn State Board of Trustees votes to cut ties with the 84-year-old coach immediately. The university had been rapidly engulfed by a shocking sex scandal involving former Nittany Lions defensive coordinator Jerry Sandusky, who was alleged to have assaulted a boy in a school shower in 2002. The incident was witnessed by a Penn State graduate assistant, and the revelation nine years later sparked outrage at Paterno and other top school officials for not going to police at the time of the assault. The firing brought a sorry end to a 46-year career that saw Paterno win 409 games, more than any other coach in Division I history.