Three months ago, who would have figured there’d be a buzz surrounding Boise State’s game against Hawaii. But it’s buzzin’ away out there, and fans are a factor. 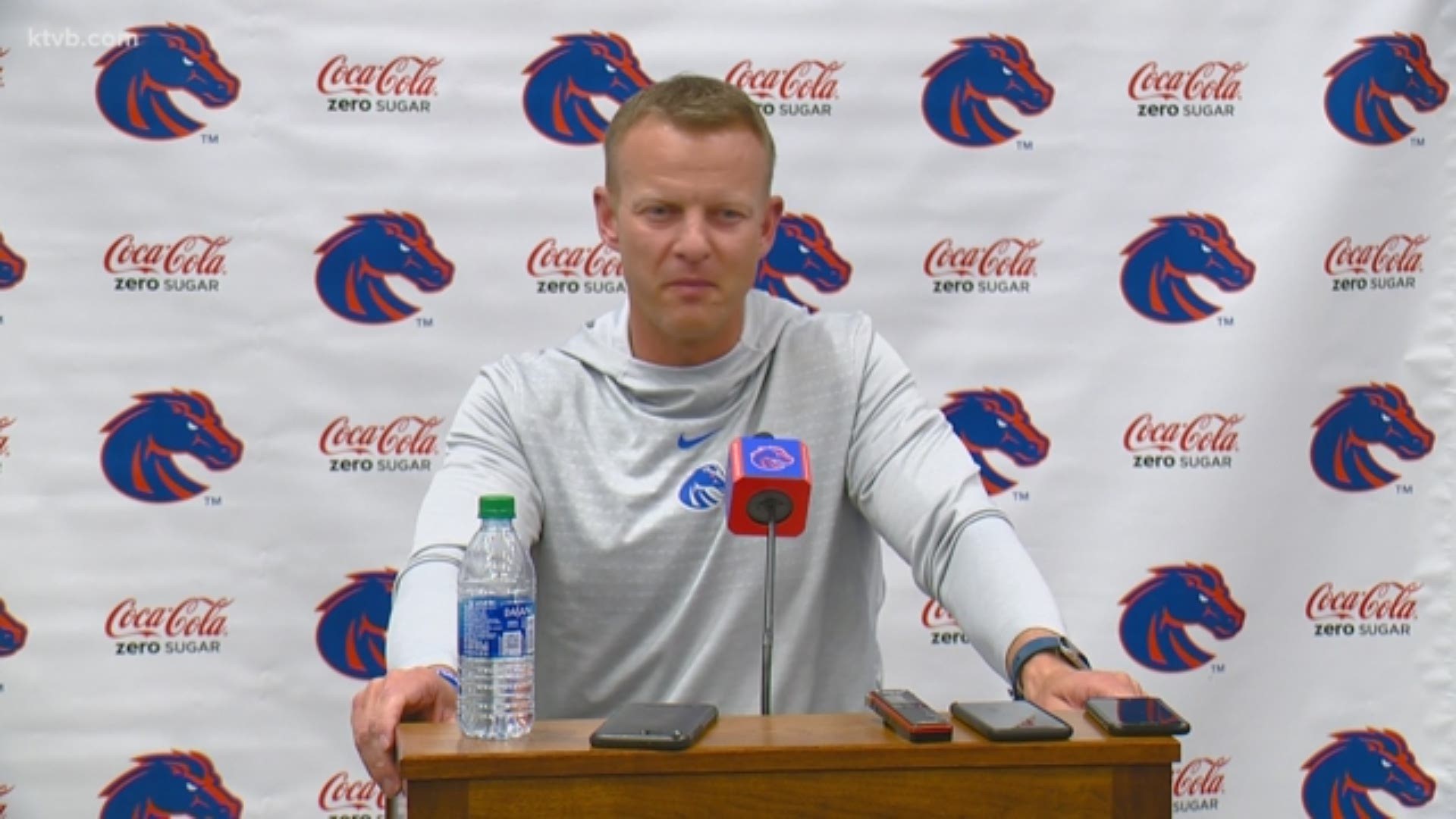 There’s one group in Boise State’s world that hasn’t received enough credit this year.  It’s the crowd.  At a time when college football attendance is eroding, this was supposed to be the season of comeuppance for the Broncos, with an unattractive home schedule, three straight home games in September (two on Fridays), and no Brett Rypien nor Alexander Mattison.  Instead, crowds have topped 31,000 in each of the first three home games, including for an 8:15 p.m. start against FCS Portland State.  Then the Air Force game approached a sellout, drawing 36,498 on a Friday night.

So hopes are high for the Hawaii game this Saturday—attendance 35,000, anyone?  And Bronco Nation creates quite an environment.  Tradition still reigns on the blue turf.  Going back to the beginning of the 21st century, noise on every defensive down (not just third) has been a thing.  And Boise State points out that since the beginning of the 2018 season, Broncos opponents have committed 36 false starts at Albertsons Stadium, the most by a visiting team at any FBS stadium in the country.

Here’s hoping the aforementioned fans take their seats early Saturday night.  Boise State is doing something really cool, renaming the “Hammer” the “Dan Paul Hammer” in honor of the popular Bronco fullback who passed away this summer.  Paul will be remembered “for both the way he played the game and the way he lived his life.”  Members of Paul’s family will serve as honorary captains for the coin toss.  The big picture: Paul’s teammates on the 2009 Boise State team that went 14-0, won the Fiesta Bowl and finished No. 4 in the nation will also be honored at the Hawaii game.  The school reports that more than 40 former Broncos from that squad are returning.

The band is back together, but the script has flipped since the last day of August.  Boise State’s offensive line at UNLV was (finally) the same one that opened the season at Florida State.  Against the Seminoles, the run game was humming, with Robert Mahone rushing for 142 yards and George Holani adding 70.  Conversely, quarterback Hank Bachmeier was sacked five times and was hit on countless other throws.  In Las Vegas, Bachmeier was kept mostly upright, as he was sacked only once.  But outside of Holani’s 46-yard fourth quarter dash, he and Mahone combined for just 47 yards on 17 carries.  October’s dawn was kind of a throwback to the past couple of Septembers.  We know the O-line is better than that.

The strange story circulating Tuesday was that the New Orleans Saints defense had studied Boise State tape from Kellen Moore’s years as the Broncos’ legendary quarterback to help them decipher the Dallas offense 10 days ago.  According to Steve Wyche of NFL Network, the Saints found that Moore was employing some of the same hand signals he had used on the field at Boise State.  That helped New Orleans bottle up the Cowboys.  Moore, in only his second year as a coach and first as the Dallas offensive coordinator, is finding out how resourceful (and sneaky) NFL opponents can be, and he will adjust.  But it’s just one more thing to set off the fickle Dallas fan base.

Consider this, though.  The Dallas offense was slicing its way down the field with ease on its opening possession against Green Bay on Sunday—until Amari Cooper had a Dak Prescott pass go right through his hands for an interception.  Let’s just say it wasn’t Moore’s fault.  Nor were Prescott’s other interceptions.  But Moore is a target for blame nevertheless.  Forget that Prescott threw for 463 yards, the second-most in franchise history, and that Dallas rung up 563 yards on the Packers, the fifth-most ever by the Cowboys, and notched 32 first downs, tied for the second-most.  Ah, life in the NFL.

If big plays are “it” in college football, then Nick Romano is quickly developing the “it” factor at Idaho.  The true freshman out of Rocky Mountain High has made big splashes in each of the last two weeks for the Vandals, contributing runs of 40 and 27 yards at Northern Colorado and a 97-yard kickoff return for a touchdown versus Weber State.  Romano had his first 100-yard rushing game in Greeley (132 yards on just 15 carries).  He leads Idaho in yards per carry at 6.7 and is second in rushing yards with 261.  Romano and the Vandals will try to snap their two-game skid in sleepy Hillsboro Stadium Saturday against the Portland State Vikings.

The Idaho Steelheads regular season is upon us.  The core of any hockey team is its goalies, and the Steelheads are fortunate enough to have two experienced returning goaltenders on the roster, Tomas Sholl and Colton Points.  Sholl is going into his third season with Idaho, and he showed what might lie ahead by stopping 25 of 26 shots in the Steelies’ exhibition win over Utah last Saturday night.  Sholl was a shutout sorcerer in his first go-round with the Steelheads late in the 2017-18 season, blanking opponents four times in just 14 games.  The 25-year-old Hermosa Beach, CA, native posted three more shutouts in 39 appearances for Idaho last season.  The Steelheads open Friday night against the Grizzlies in West Valley City.

This Day In Sports…brought to you by LIKE NU CAR WASH…Boise’s best exterior wash!

October 9, 1989, 30 years ago today:  The San Francisco Giants win their first pennant in 27 years, ending Chicago’s latest World Series dream.  The Giants beat the Cubs 3-2 at Candlestick Park to take the National League Championship Series, four games to one.  Will Clark hit .650 in the NLCS to win MVP honors, leading the Giants into a Bay Bridge Series against the Oakland A’s—one that would be interrupted for 10 days by the Loma Prieta earthquake.